I hope everyone had a great weekend!  We obviously drank wine and had a party for our dog, but we did other stuff too!

1.  We booked our train trip up to Seattle for the marathon

And by we, I mean my aunt did.  (Thanks B!)  My aunt and uncle are coming with us, which should be lots of fun.  They are always so supportive of me and it will be great to have them there.  It will be good for Eric too, since the poor thing gets dragged to these races and then has to wait for his slower than molasses wife.  At least he will have company with him!

This will also mark the first time I've been on a train since I was 9 or 10.  I came up to Oregon twice with my dad on the train (he used to have a flying phobia), and it was a total hot mess both times.  Train breaking down in the middle of nowhere, train having no plumbing, hitting (and I assume killing) a man who was trying to beat the train on his tractor and various other shenanigans.  I swore up and down Scarlett O'Hara style that I was never, ever going to take a train anywhere again.  Eric has been trying to coax me to consider taking the train up to Seattle since the drive up there can be a royal pain in the ass, but I have so far refused.  Then this marathon thing came up, and since driving to Seattle is a nightmare on a normal weekend, I imagine it's going to be Mad Max: Beyond The Thunderdome on Thanksgiving weekend.  We were planning to leave on Friday, ie Black Friday, also known as the day I usually don't step forth from the house in an attempt to avoid crazy people.  Anyway since I married the voice of reason, he finally talked me into taking the train.  I am doing it with half of an open mind, half of a really hard side eye, but I am trying to have a good attitude about it.  But I swear if we hit some dude on a tractor, I'm done with the train for life.

2.  I made my favorite roasted potatoes with herbs

I know this isn't THAT remarkable, but I do love these potatoes so much.  Potatoes get a bad rap, but they are actually quite good for you if you prepare them healthfully.  Roasted potatoes are my thing, and I'd pretty much eat them daily if I could.

Since our weather has been so warm, my herb garden has gone crazy.  I thought my chives from last year died, but they are back with a vengeance, with my tarragon slowly behind it.  I didn't realize I missed having an assortment of herbs to work with until yesterday when I was able to cobble together enough rosemary, chives and tarragon to mix with my roasted potatoes. 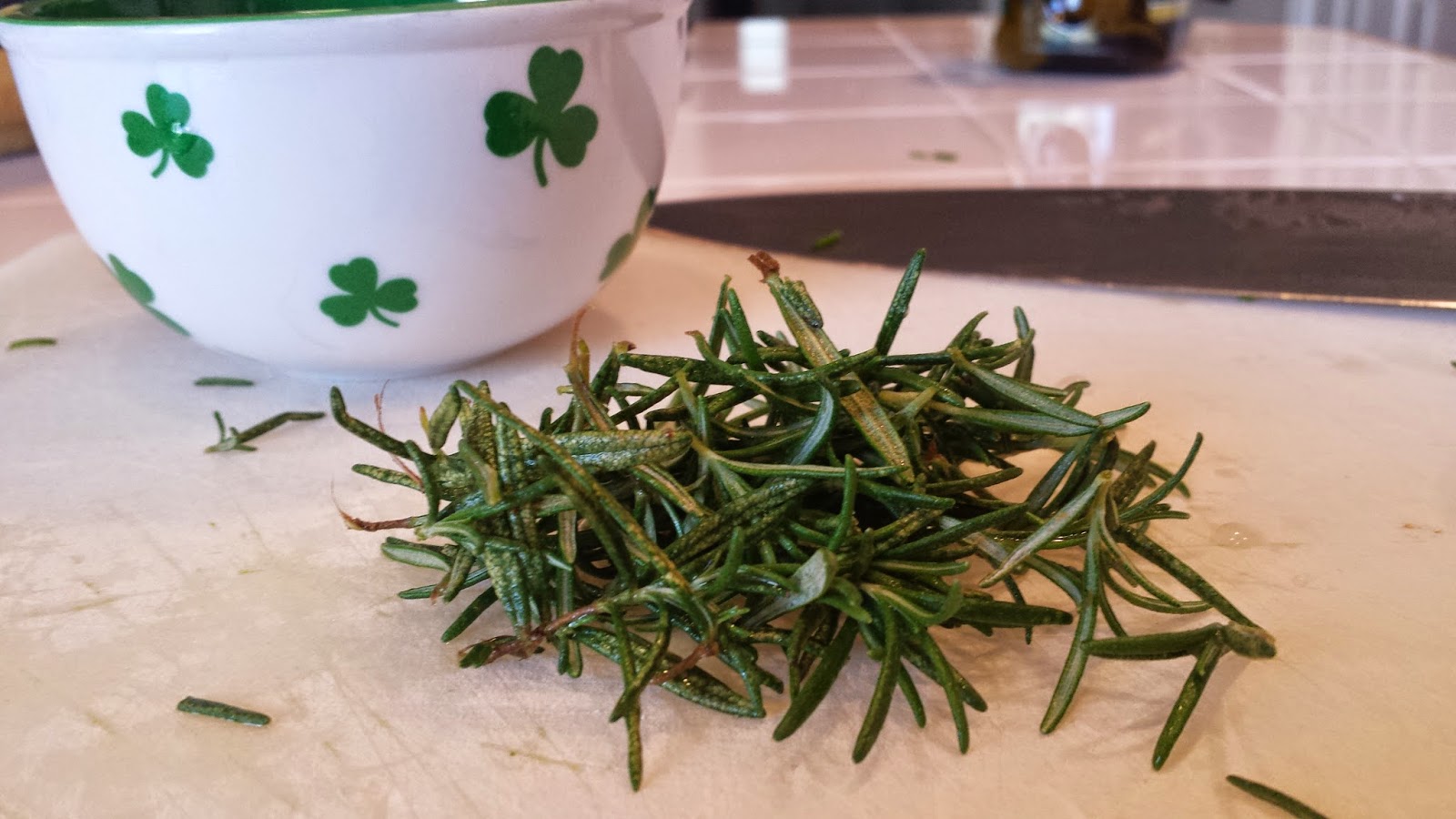 I also do herbed potatoes a little differently since I am a unique, delicate snowflake.  Instead of mixing everything together and then roasting, I roast the potatoes and then throw the chopped herbs on them the instant they come out of the oven.  This does several things.  Firstly, the herbs stay green and keep their flavor.  I find that roasting the herbs with the potatoes makes them super bitter no matter what the herb is.  Rosemary gets super bitter though if it's cooked too much, and it's not good times.  Secondly, when you throw the herbs on and then let them sit on top of the scalding food for a bit, something wonderful happens.  They kind of "fry" and get crisp without compromising taste or color.  It's almost like a speed dehydration or something.  It's especially delicious with parsley, but I didn't have enough of that in the garden yet to add to the dish. 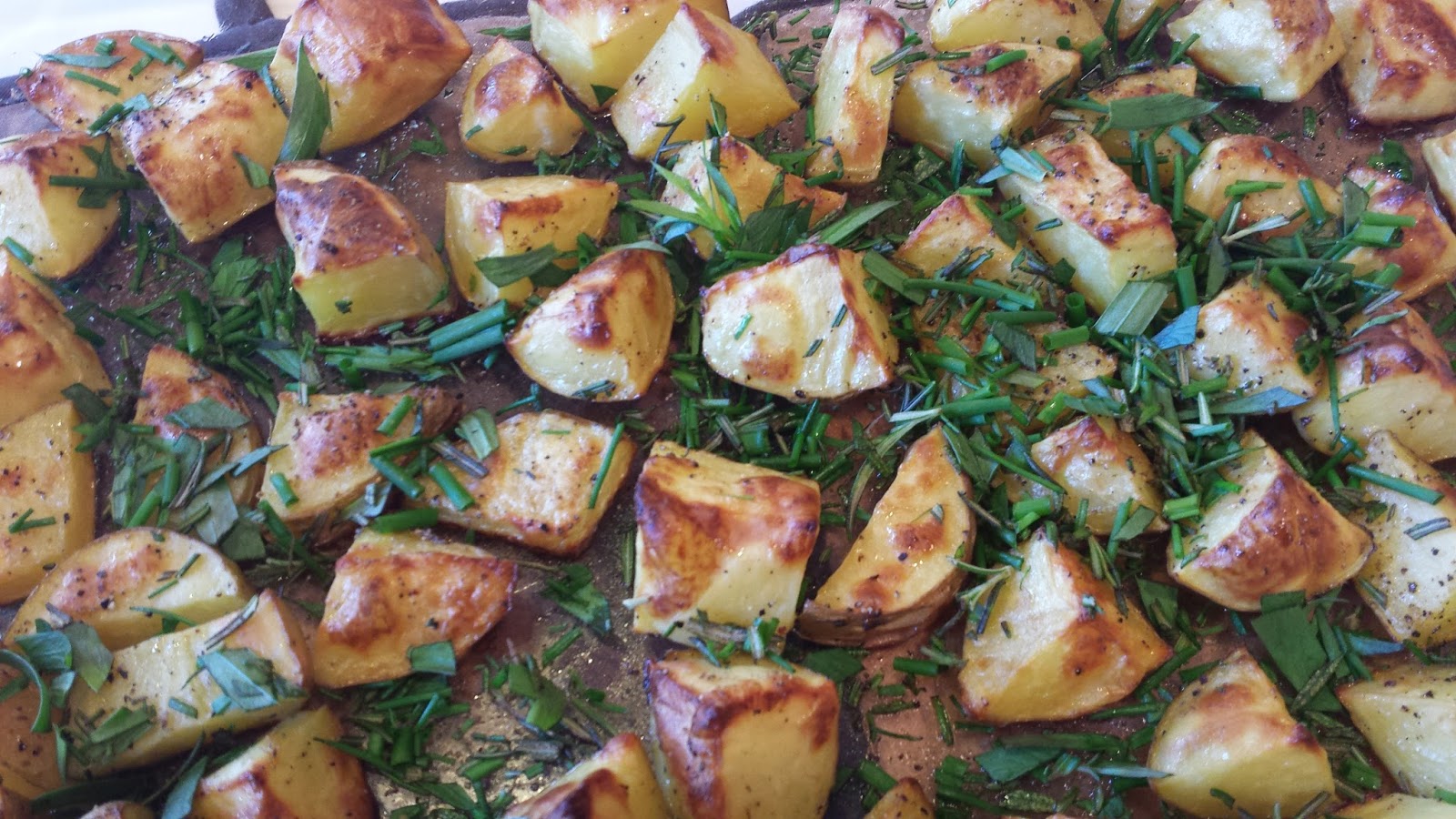 That's what it looks like after sitting for a bit, still green and pretty.  It doesn't look like it, but the herbs are slightly crisp from sitting on top of the hot food.  And the smell from the herbs hitting the heat is just heavenly.  Love it.

I got an email after the Shamrock Run that if you used your bib number  as the promo code, you could get $4 off if you signed up for the Starlight Run.  It's a 5k that happens right before the Starlight parade during the Rose Festival, and as soon as the race is done the parade starts.  It's actually a night time race, which will be unique and different for sure!  If any Oregon readers are interested in meeting up, let me know!

It was kind of nice to only pay $18 for a race.  I was trying to look for some other races to do, and everything is so expensive!  I'm not sure if it's just my current state of things where I'm trying to be conservative with spending, or if races have really gone up that much in price, but it's really ridiculous.  For instance, I think $79 (early registration mind you) for a 10k is simply outrageous.  A 10k?  You don't even get a medal with that, and getting a crappy shirt that will never fit my boobs certainly doesn't make it worth my while either.  It also drives me insane when distances are all the same price.  Why should a half and a 10k be the same price?  You are using half the resources in a 10k as a half runner, so why would I have to pay the same?  Anyway, I'm looking around for some cheaper options.

Holy crap.  I thought The Jinx was scary, but Going Clear was scary for sure.  If you're not aware, it's a documentary on HBO about Scientology, and it's crazy with a capital K.  Some stuff I knew thanks to one of my favorite South Park episodes of all time, but other things I didn't.  They interview several people who used to be high ranking people in the "church" (I loosely use that term), and some of it is truly sick and disturbing.

One of the first times I went to visit Eric when he still lived in Hollywood, we were walking close to the "church" and one of their wackos asked me if I wanted to take a "personality test".  At the time I thought it was hilarious because of South Park, but after seeing Going Clear I'm going to want to pepper spray a bitch if they come up to me with that nonsense again!  No thank you, I will keep my money and my sanity.