So last month Eric and I did the mother of all Goodwill trips due to my cleaning out of our spare room upstairs, and it felt so freeing that we made a pact to put one day each month on the calendar to go to Goodwill.  At the beginning of last year we really resolved to start living a little more simply and paring down our house.  I was an emotional pack rat back in the day, and while I am somewhat reformed on not bringing a bunch of new crap into the house or keeping silly tokens, I have been too lazy to go through the whole ordeal of digging into rooms and doing some decluttering/organization.  I am slowly becoming better about tackling those jobs, and it does feel great to have more room in the house and less crap to deal with.  Ultimately we do want to move to a different part of town in the next year, year and a half TOPS, and preemptively going through and reducing what we have will make things MUCH easier when that day finally comes.  You will know when that day comes because I will cause a scene by having a parade down our bunk ass street while I shake up a bottle of champagne like they do at the end of NASCAR races.

Anyway, our Goodwill day is tomorrow and I'm not nearly as prepared as I should be!  I planned to go through the kitchen and really overhaul the cabinets since I've got way too many gadgets and doodads, but that didn't happen this month.  I've been slowly throwing clothes I'm outgrowing in a pile, so I decided to be more aggressive and really tackle my closet and dresser this morning.

It's such a weird feeling when you start outgrowing clothes.  Overall of course it's wonderful, but it's also...I don't want to use the word scary because that's not really it.  It's more like that moment when you do a zipline the first time, and the instructor tells you to lift your feet up so you can be pushed into the abyss and almost poop your pants right in front of the Lord and everyone of Fremont Street in Vegas.  Not that I know what that's like or anything.  Anyway, it's this moment where you have to trust that you're harnessed in and that the high reviews of the place on Yelp were accurate, and to do something that evolution doesn't prepare you for.  Getting rid of your fat clothes is like that.  You're trusting that you won't need them anymore.  It's making a statement.  It's saying that you're not going to be that fat ever again so there is no need to keep those clothes, even though some were genuinely cute or you have appreciation for certain outfits.  It's weird.  It's worrisome, because what if you get fat again and then you don't have that one top that always perfectly masked your gut roll?  I had to get rid of a lot of cute stuff that I liked, but was just swimming in.  There's no point in keeping it because it's the past, and I most certainly will not be at a point where I need it again.


I also got rid of a lot of the clothes I "settled" for, and that certainly wasn't a struggle for me.  Pants and tops that I hated, but were the only things that somewhat fit me.  Now they're too huge, and good, because I hated them anyway.  I now have a few new pieces that definitely weren't ones I settled for.  They're pieces I like and chose carefully, and will hopefully fit for awhile so I can get my money's worth until I have to do the next closet overhaul.  I'm proud to hang them up in my closet, though I wish I had an idea of what my work situation was going to be so that I could have a sense of what types of clothes to buy in bulk!  I definitely need more because I basically have three pairs of jeans!

One thing I still cannot get rid of is this t-shirt.  I don't have to tell you this, but it's really freaking old.  My beloved grandmother got it for me when I was either 15 or 16 and I am now 35, so yeeeeeah.  It should be in the Smithsonian. 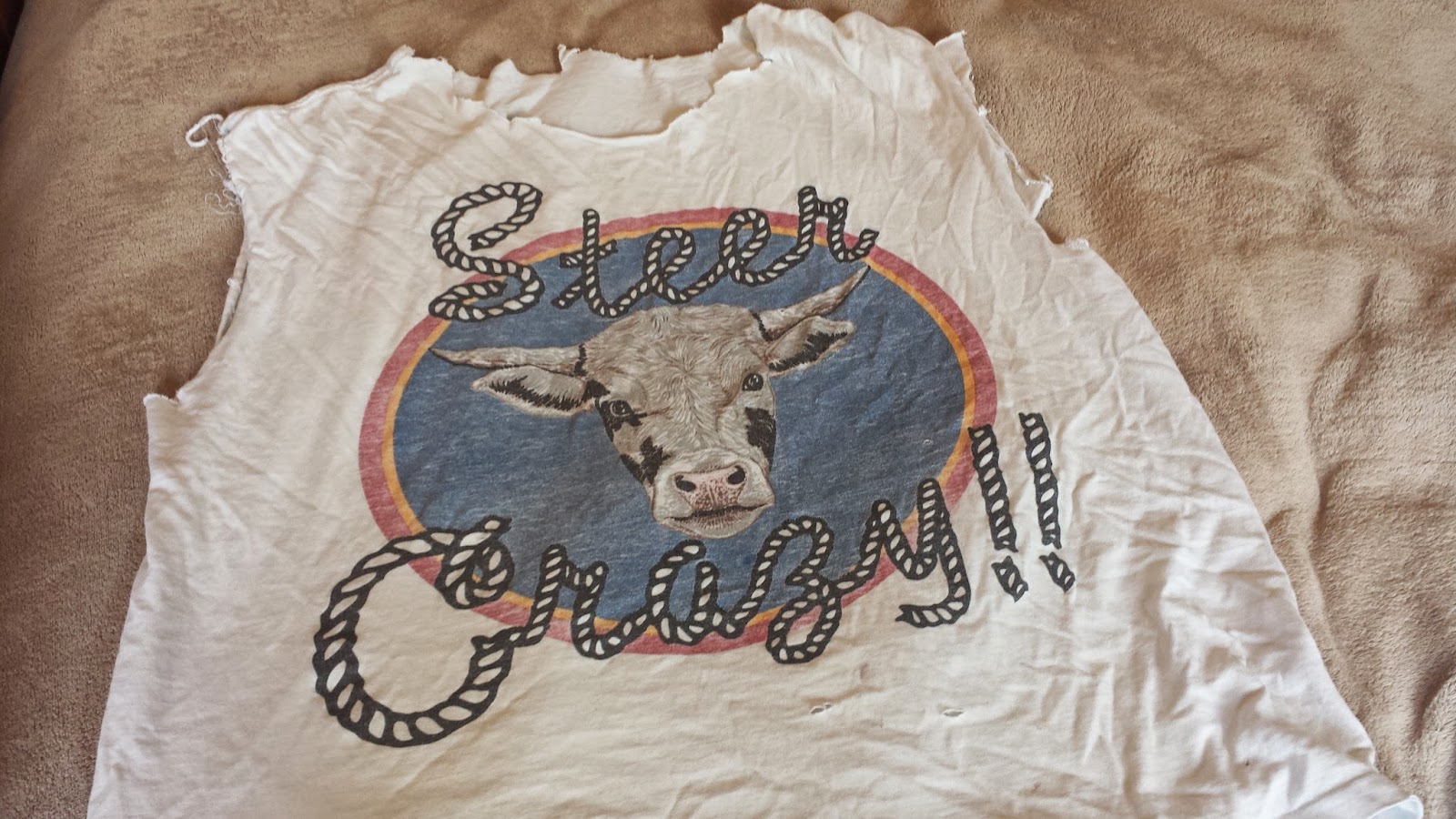 This poor shirt is truly so raggedy, it used to have sleeves that pretty much denigrated, as well as the collar.  One of my friends, her husband once was trying to quote the Ludacris song "Area Codes", but instead of the correct lyrics said "holes in various area codes" in his adorable Indian accent.  This shirt definitely has holes in various area codes.  But I just can't get rid of it, the way I can't ever get rid of anything my grandmother gave me.  If she were standing before me right now and I was trying to explain to her why I keep this shirt, she would roll her eyes and say "Oh hell!" very impatiently.  Because she was not down with the "looking tacky" or keeping something so threadbare around. Even so, it stays in the dresser!