#WhoIsBeck and the Crepes That Never Were

So Pineapple Express is not just a really dumb Franco/Rogan movie, it's an equally annoying weather system that has been sitting over us for like a week and bringing obscene amounts of rain.  I guess Washington especially is getting hit hard with flooding and all of that fun stuff, and Oregon surpassed the amount of rain it normally gets for the whole month of February just last week.  Fun!  Actually not, because the sidewalks where I go run are an utter nightmare.  I already have a fear of falling while running, mostly because I am like Samuel Jackson's character in Unbreakable and get injured over the most minor things, so I can't imagine what a fall would do to me.  The sidewalks were literally spaced every 20 feet or so with puddles that are ankle deep and 3 feet wide both ways.  You would think engineers would gather that we live in a super rainy state and that maybe designing streets/sidewalks for optimal drainage would be important, but you know, details. 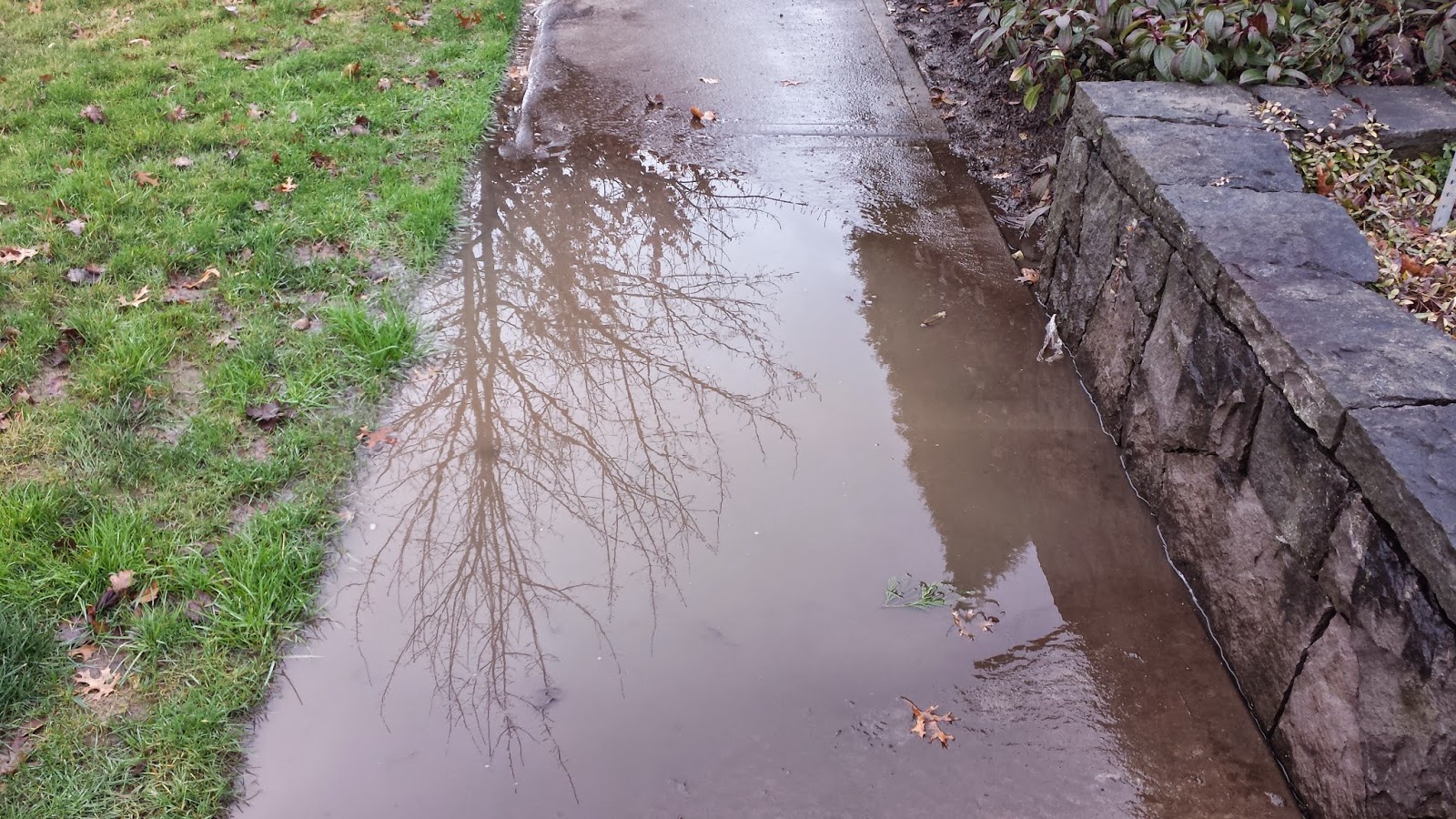 I went out this morning with the intent to run, and I did for probably a mile, but I was having to tip toe and navigate water/mud so much that I just gave up and walked.  Then I gave up trying to dodge the puddles and suffered with wet socks/shoes the whole time.  I ended up doing 5.2 miles and it was miserable every step of the way.  To quote Four Weddings and a Funeral, "there comes a point where you're so wet that you can't get any wetter", and that was today.  The rain never stopped, not once and I was so cold and wet from head to toe that all I could think about was a hot shower, hot tea and dry pajamas the entire time.  But I've been so inactive lately that I had to break the cycle and do something more than some little BS dick around walk with the dog, so that was my version of paying the piper.  I felt good once I was done and able to get home to dry off, but I definitely earned this one today! 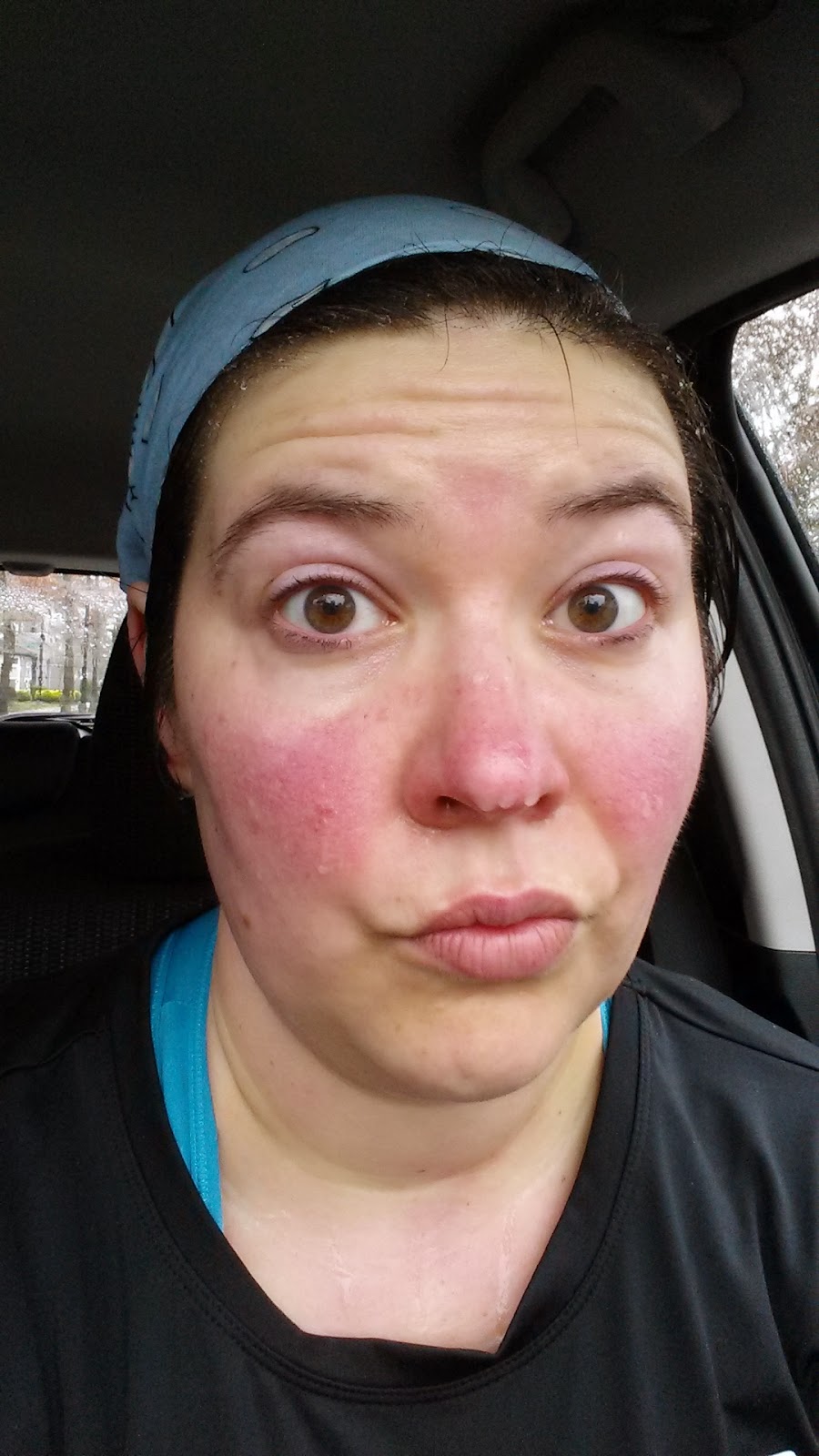 My eating has also been awful lately so this morning I tried to make another recipe from my Runner's World cookbook.  I am a good cook but sadly, I am not a "pretty" cook.  I can't do fancy pipings of buttercream or delicate things because I have the gentle touch of Godzilla.  The recipe I attempted to make today were these egg crepes with a vegetable filling.  All a wonderful idea in theory but I realized immediately that making thin, delicate crepes that require some finesse wasn't going to work out for me.  I just ended up scrambling the egg mixture and having it with the asparagus I roasted.  As they say, it's all going to the same place in the same condition, so it was fine.  At least it tasted good.

Did anyone watch the Grammys last night?  I wouldn't have really on my own, but Eric wanted to watch them because he's a geek and a walking Wikipedia when it comes to anything music related, and I mean that in the most loving sense because I'm in awe of all he knows.  Unlike his mean old lady wife, music did not cease to exist for him once 1999 came and went, and he's very open minded and in touch with what's out there.  He does force me to listen to more recent stuff and I have been won over by a few things, but I rarely find stuff that I'm super into.  I fully admit to throwing a judgmental side eye and a disdainful sneer to most of the top 40 stuff the way I'm sure my parents did with my music, except the difference is that I loved my generation's music AND my parent's generation of music AND my grandparent's generation of music.  I didn't dismiss their music because it was "old".

Anyway, the performances last night actually weren't that bad other than I don't get why country music gets 25 awards shows a season AND got to perform like 5 times at the Grammys.  That's a personal complaint because I'm just not down with contemporary country at all.  It would be nice to see some jazz, blues or God forbid, some metal/rock performances.  I know everyone has their knickers in a twist about Sam Smith, but I thought his performance with Mary J. Blige was really nice.  His song is a little mopey for my taste, but it's better than most of the stuff out there.  Hozier's "Take Me To The Church" with Annie Lennox was pretty awesome too.  Beck was the pleasant surprise of the night and I was pretty happy about him winning until I saw #WhoIsBeck was trending on Twitter.  I already had the faints over the fact that a lot of the "youngsters" don't know who Paul McCartney is, which seriously makes me want to turn all of their parents into CPS.  Not telling your kids who the Beatles are is child abuse.  But with Beck it's like, really, you can't even bother to know music that is only 15 years old or so, plus the guy is still making albums today?  It's not like he was given an award for Odelay, it was for his NEW album.  I know I'm about to slip slide away into an old age rant, but I find this generation's mentality so depressing sometimes, it's like the only thing that matters is what's right in front of you in the moment, and there's no willingness to open your mind.  Instead of saying "Ug, who is this" maybe say "hmm if this guy won best album, maybe I should check it out because I might like it."  Just because you don't know him doesn't mean he's unknown.  I can't stand willful ignorance, so the refusal to see what else is out there besides the overly corporate, formulaic crap that is being spoon fed down millennial's throats drives me crazy.  Ridiculous.  And does anyone need to GO AWAY more than Kanye West for being an insanely rude prick all of the time?

My main point of concern however is finding out what Beck's secret is, because the guy looks younger somehow than he did in the 90's.  How is that even possible?  I mean what's going on there, some Pond's cold cream action?  Bathing in angel tears nightly? Voodoo?  Whatever it is, I need it.  And can we also talk about the most important person of the night, ie Prince? 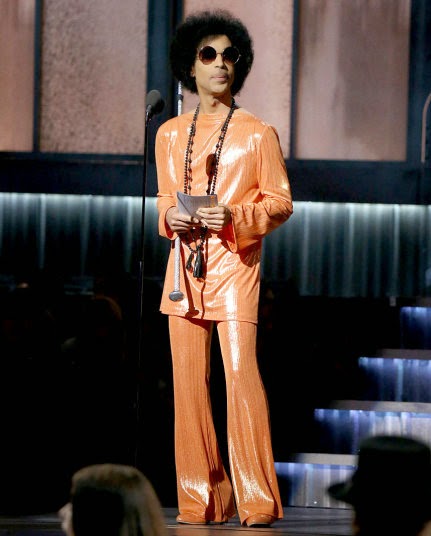 Prince was wearing a hot smirk, a hot outfit and a hot afro, and really that's all you need for timeless glamour.  His outfit is Blanche Devareaux meets Sly and the Family Stone, and I love every bit of it.  He looks like he's about to slink off to the Rusty Anchor and sing a breathy old standard next to the piano (that's for you Golden Girl fans).  Love this dude.  Besides the fact that he shreds a guitar like no one's business and is one of the most talented musicians alive, he can make any crazy ass outfit cool.
Posted by Runs To Get Waisted at 11:58 AM