Not a ton of updates on my health stuff other than to say that I wish I could yank my lungs out and get a brand new pair, and that if I had a dollar for every time I have said "God someone just shoot me" in the last 48 hours....well, I'd have a lot of dollars.

I mainly want to post pictures of our Mardi Gras ball from last night, which I laid in bed all day yesterday to reserve my energy in order to rally last night, and boy rally we did.  The Krewe who puts on this ball is the Mysti Krewe of Nimbus, and while they are Portland based, all of the members are from Louisiana.  The theme for this year's ball was Voodoo Valentine since the ball fell on Valentine's Day this year.  Since Eric and I don't really celebrate Valentine's Day, it seemed completely "us" and appropriate to dress up in ghoulish costumes and go dancing.  ;)

I dressed as a voodoo doll and Eric was a voodoo priest.  I put some effort into actually buying a cheap dress and sewing some random details on it, mainly the heart with voodoo needles sticking out.  I did my own makeup as well as Eric's, and I have to say, everything turned out exactly the way I wanted it to!  We took about a million pictures of our outfits, but here is a small sampling: 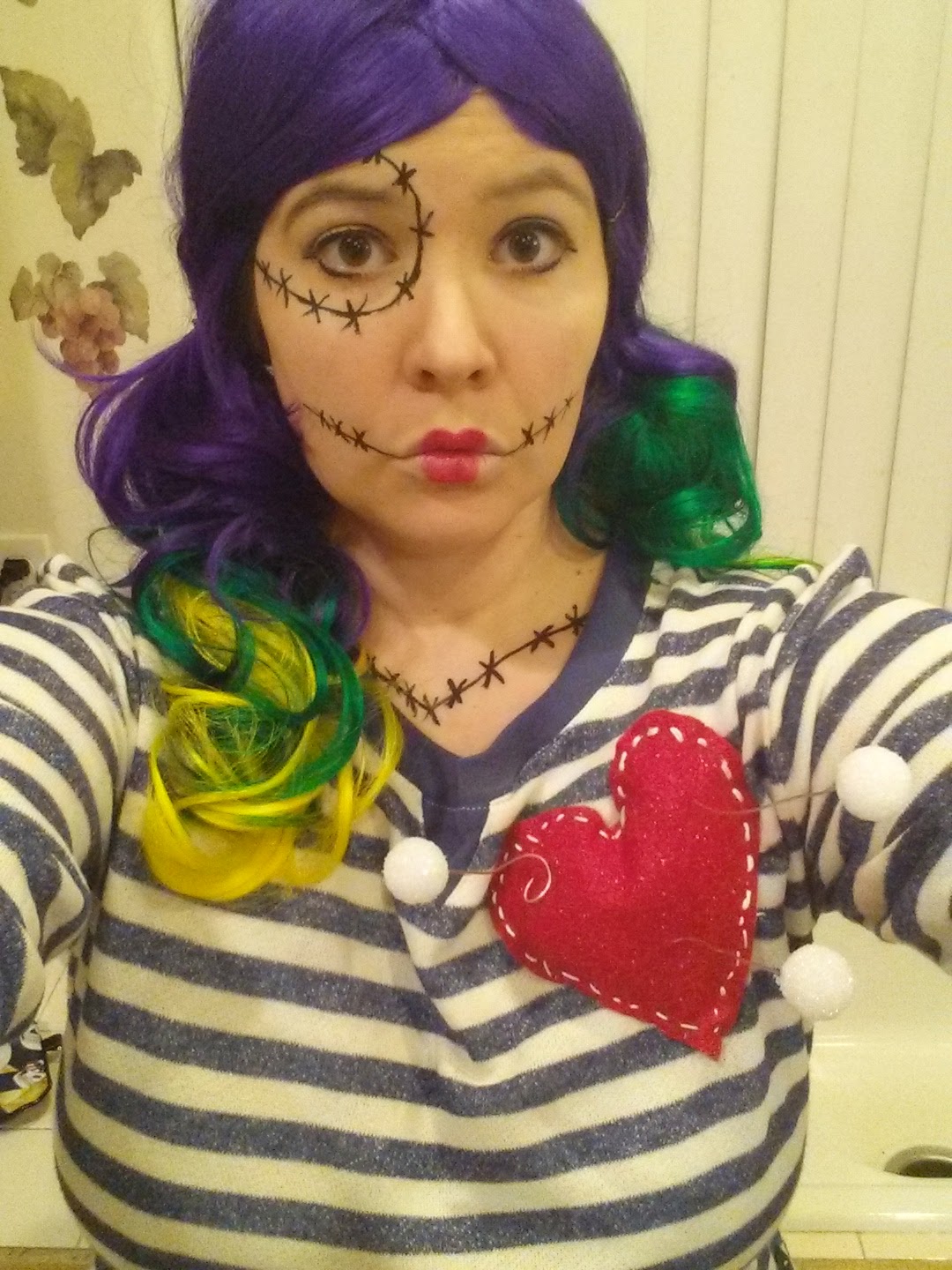 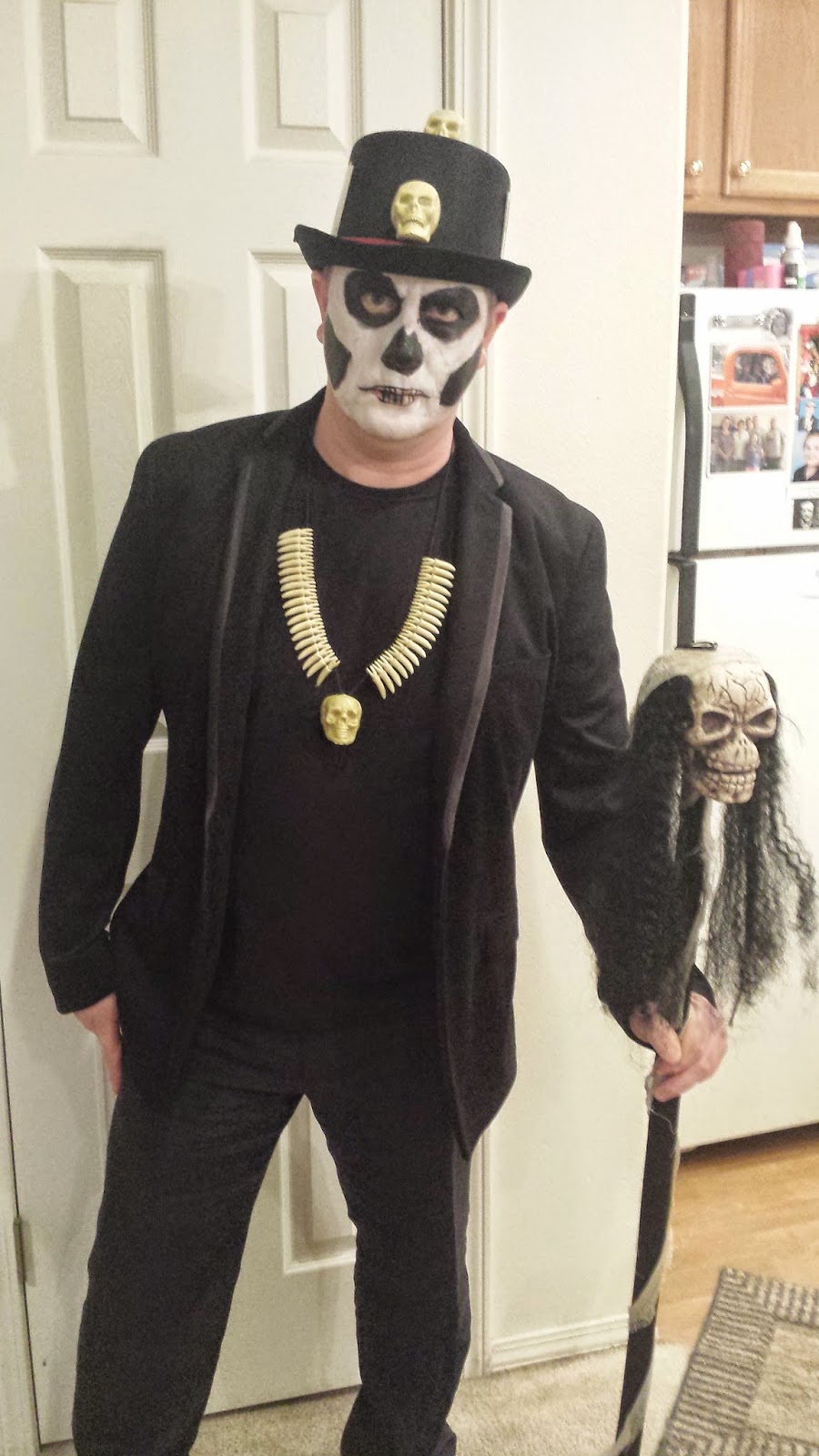 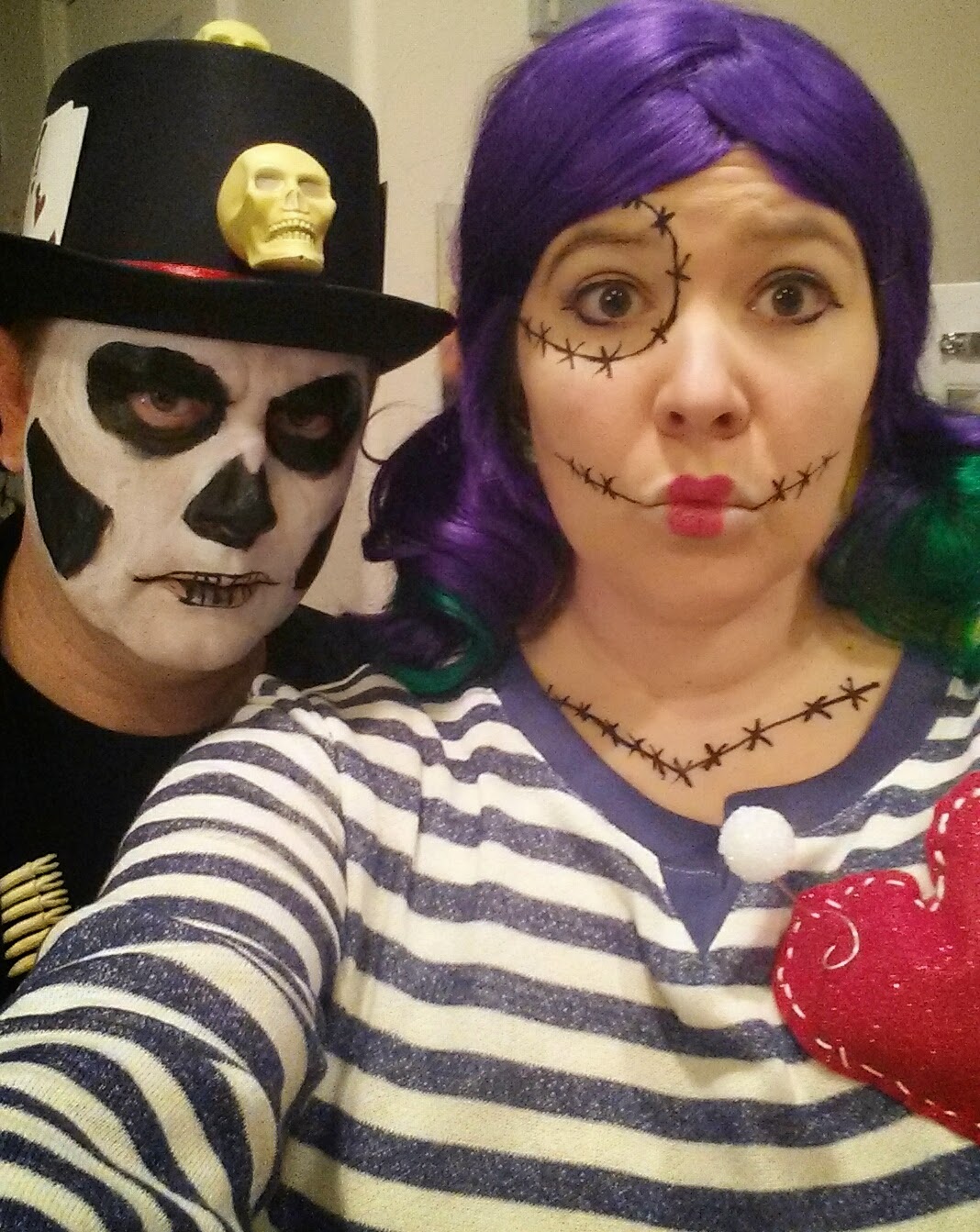 And to show you that Portland stands by its motto of "Keep Portland Weird", we walked several blocks in those outfits and barely anyone batted an eye!  The only time we really got a reaction is when we walked past this fancy restaurant and several people did a triple take at Eric.  I told him that he should have leaned into the window and stared menacingly at everyone.  ;)

The ball was absolutely amazing.  Besides a very embarrassing coughing jag (near the food no less), I was able to pull myself together once I funneled a drink and some scalding hot gumbo down my throat.  When we first got there there was a really great brass band playing, so we ate quickly in order to get out on the dance floor! 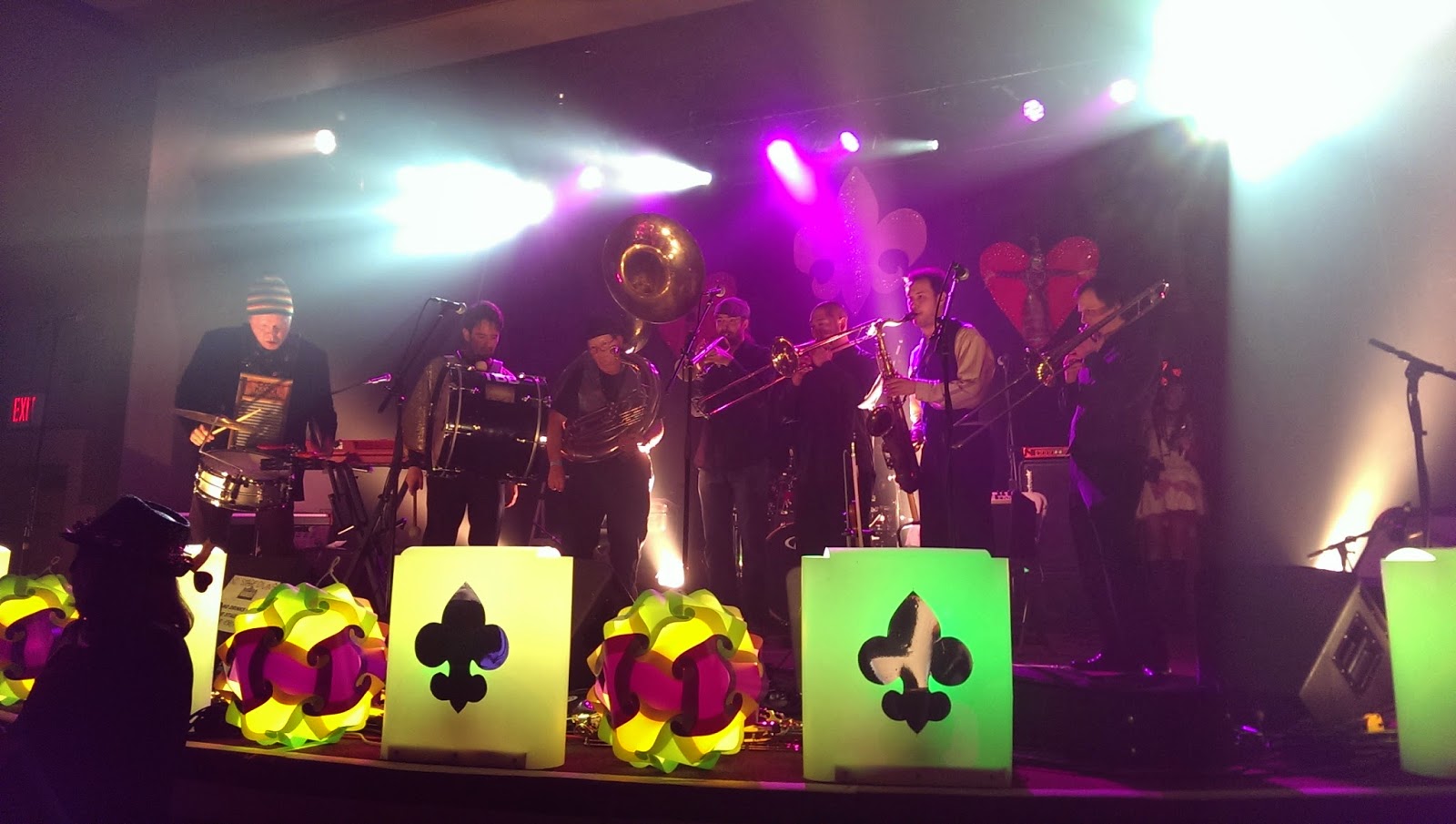 I love seeing what traditional music from my neck of the woods does to people.  There was so much joy in the room and everyone was having a blast.  A lot of people at the ball were clearly transplants from Louisiana, but many were just regular old Portlanders.  Everyone was out dancing like crazy and grooving to the music, including us!

Then shit got real and they had a Skull and Bones gang do a processional through the ballroom.  I admittedly was not familiar with this tradition since I didn't grow up in New Orleans proper, but it's part of an ancient African/American Indian tradition.  The skull and bone gangs dress in skeleton costumes and go through the streets at dawn on Mardi Gras day, knocking on people's doors and getting everyone up before the first parade.  The procession was totally crazy, and while I did get a lot of pics, most of them are blurry.  I wish I'd taken video, because there is no way to describe it adequately.  It was like Eyes Wide Shut meets The Crow or something, it was wild.  The Skull and Bones gang came through beating drums, dancing, chanting and prompting a lot of call and answer stuff.  They stayed in the crowd a long time, dancing with people and continuing to sing and chant.  They finally all made their way onto the stage and did several songs with the next band. 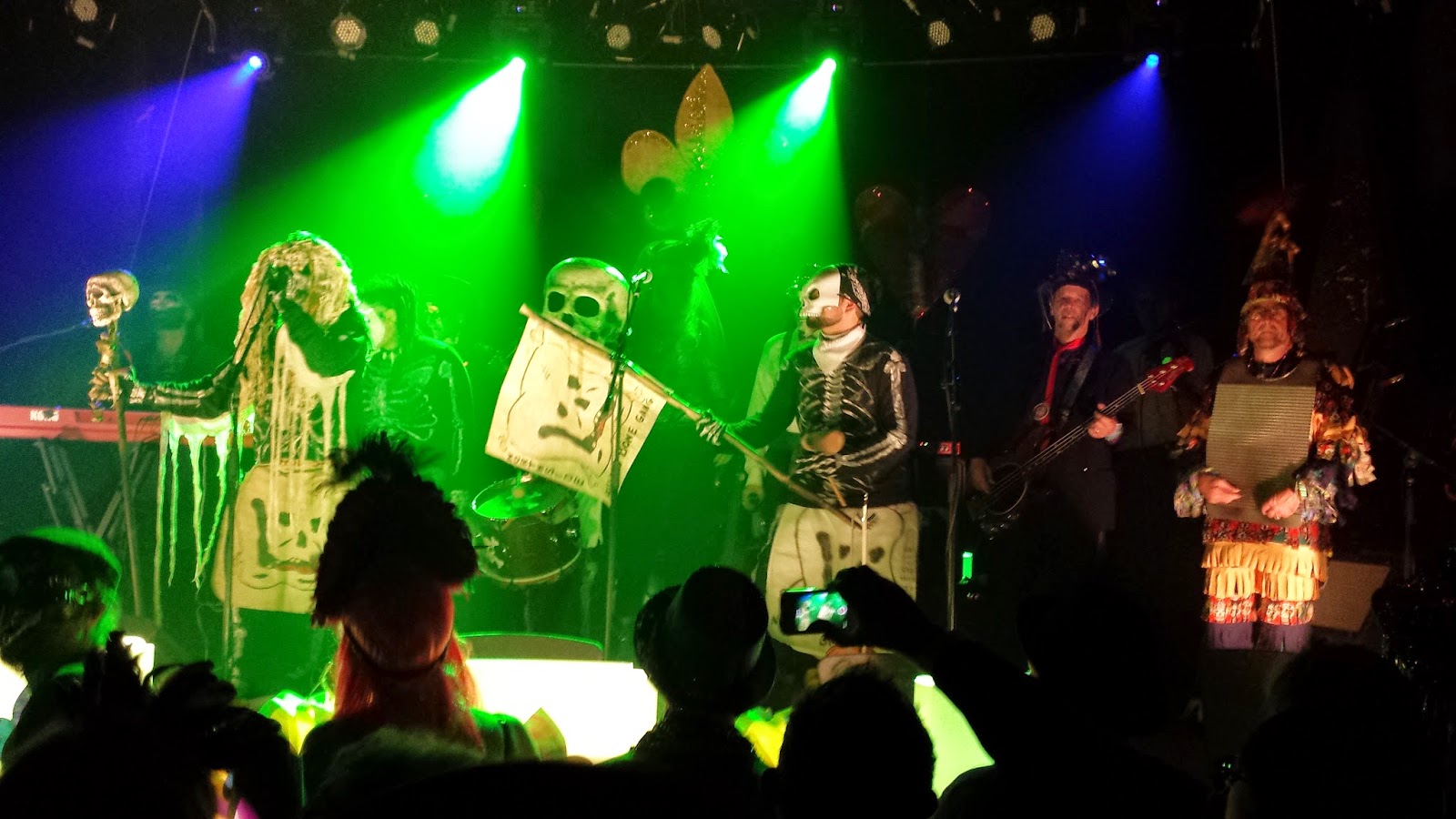 The guys in all of the skull masks are obviously part of the S&B gang.  The guy with the mop hair was especially awesome.  We danced almost the entire time we were there, and we were so sweaty and hot by the end of the night!  It's probably the most activity I've had all week!  I honestly felt like I was back home, even if it was just for a couple of hours, that type of music just does good things for me.  I was glad that Eric got to have a taste of what real Mardi Gras and its traditions are like, and not the beads and boobs version you see hyped up for tourists.

One thing I did NOT like was that there was a giant, and I really emphasize the giant part in this, voodoo doll mascot that wandered through the crowd all night.  Fun Mary fact, I actually have a mascot phobia and really don't like even being in the same room with mascots at all.  I have been known to use people as a human shield if one gets close to me.  I was seriously paralyzed with fear a couple of times last night because this thing would suddenly be behind me on the dance floor.  But you would be paralyzed too if you turned around and saw this standing behind you: 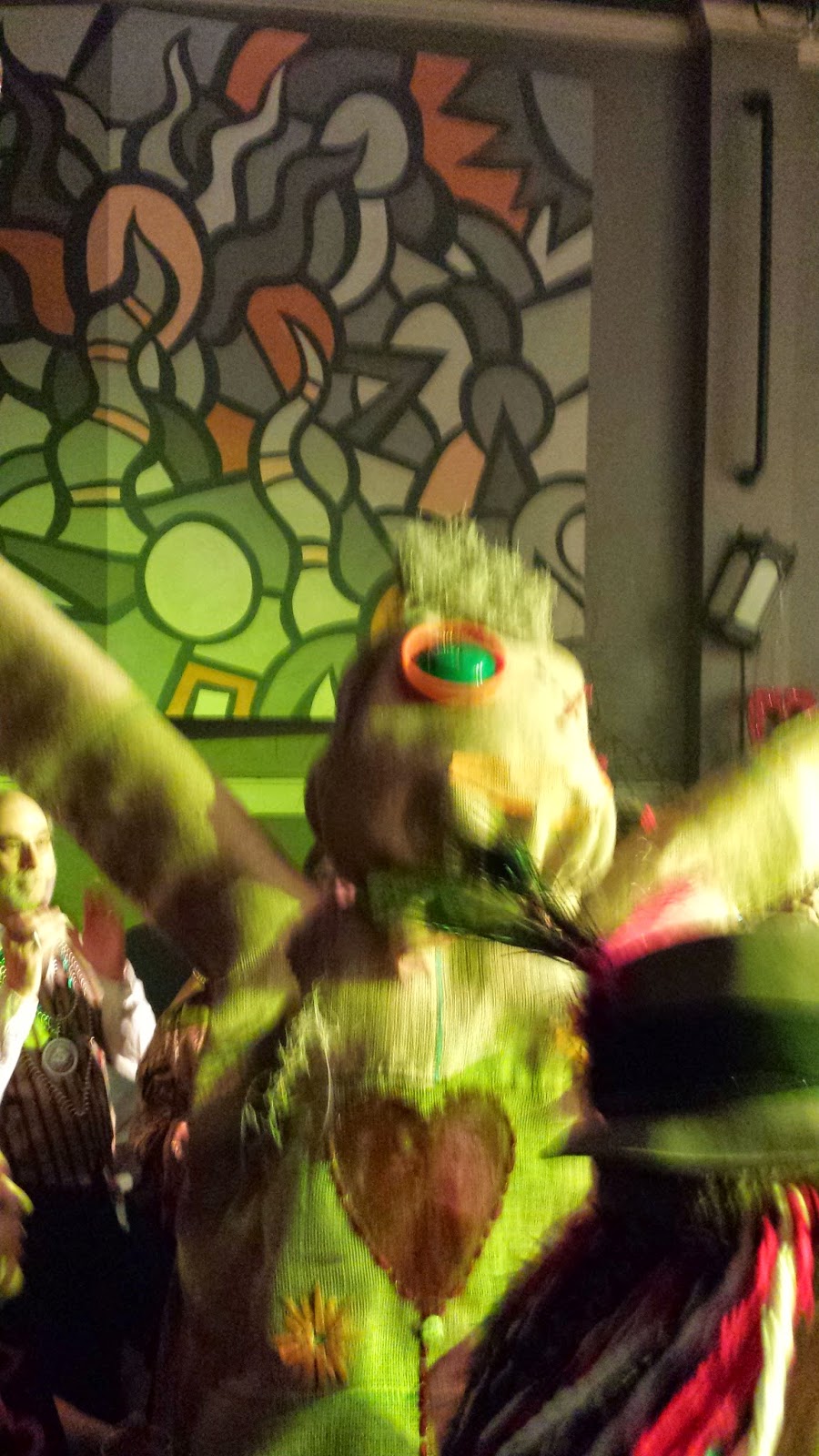 I mean am I right?  I know that's not a great picture, but this thing was about 7 feet tall and crazier looking than all get out.  *shiver*

All in all we had so much fun that we definitely want to make this a tradition!
Posted by Runs To Get Waisted at 4:34 PM