We've been so blessed this week when it comes to weather.  On Friday I met Eric for lunch and then drove to this huge garden center we have up here called Al's Garden Center (in my mind it's eternally referred to as "Big Gay Al's" due to my love of South Park).  I walked around for well over an hour just because I could.  Gardening is one of my passions, and walking around in the sunshine and browsing all of the plants and planning out my 2015 garden really did me some good.  I needed something to replace my poor dead lilac tree, and I finally settled on a Texas Scarlett honeysuckle vine.  Of course we're supposed to get freezing temps over the next couple of nights, so hopefully it survives!

Today we went to the Farmer's Market because we thought the kettle corn people would be there, and we needed popcorn for our Oscar party tomorrow.  I totally misunderstood their site, because they happened to not be there.  It was such a gorgeous day that we didn't really mind, especially since it was an opportunity to get some fresh vegetables.

We we walked around and chatted until we finally chose a few things for dinner tonight, including grass fed NY strip steaks and locally grown fingerling potatoes.  There has been such an anti-potato sentiment in the media over the last few years, but they really are so good for you.  They have crazy amounts of potassium and vitamin C, and are actually very healthy.  Just don't slather them in butter and sour cream! 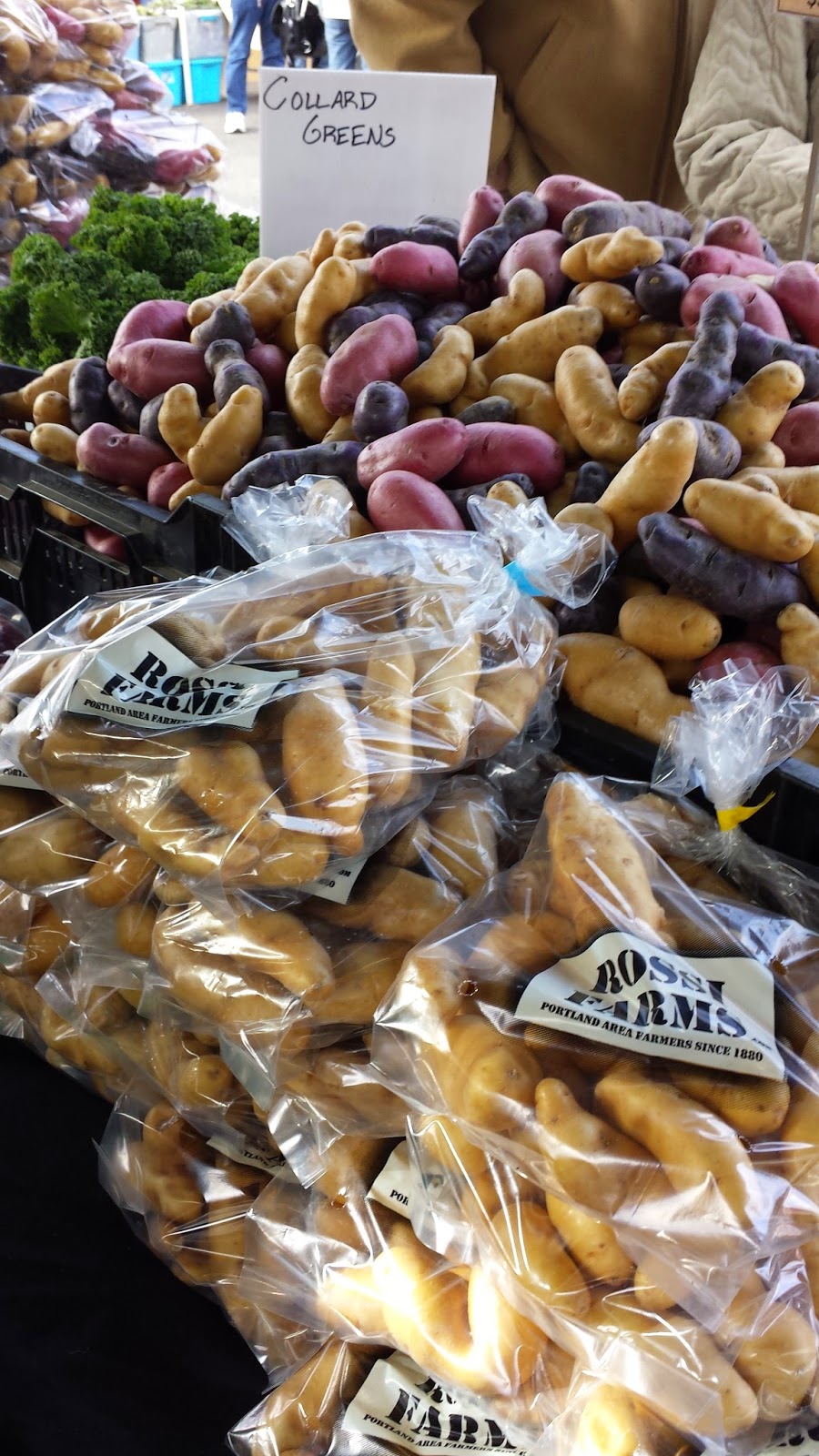 The insides of them were beautiful when I was cutting them up.  The red ones had pink flesh, the purple had white and lavender swirled flesh. 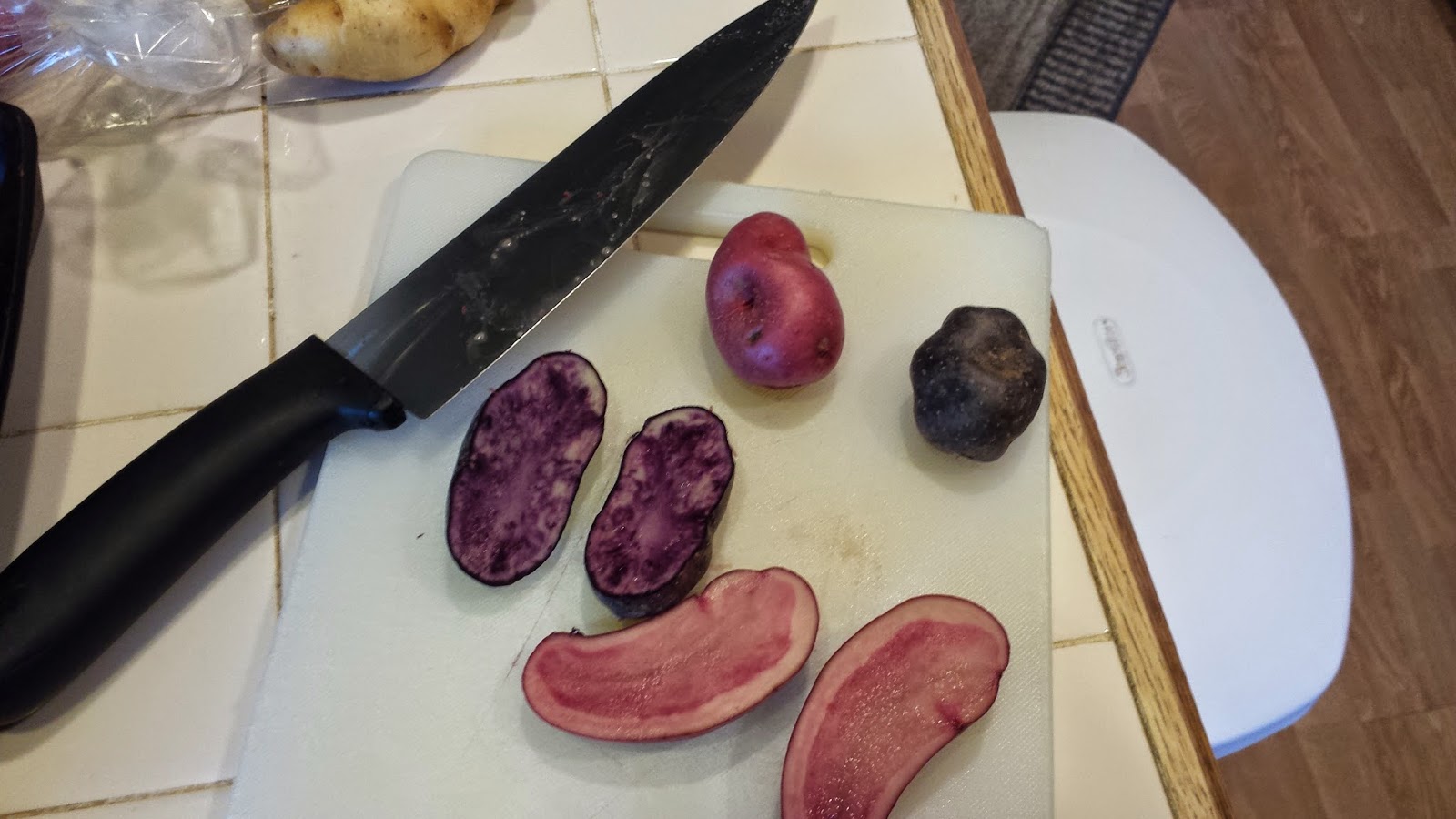 And then there was one potato that looked like....well, what do you think it looked like? 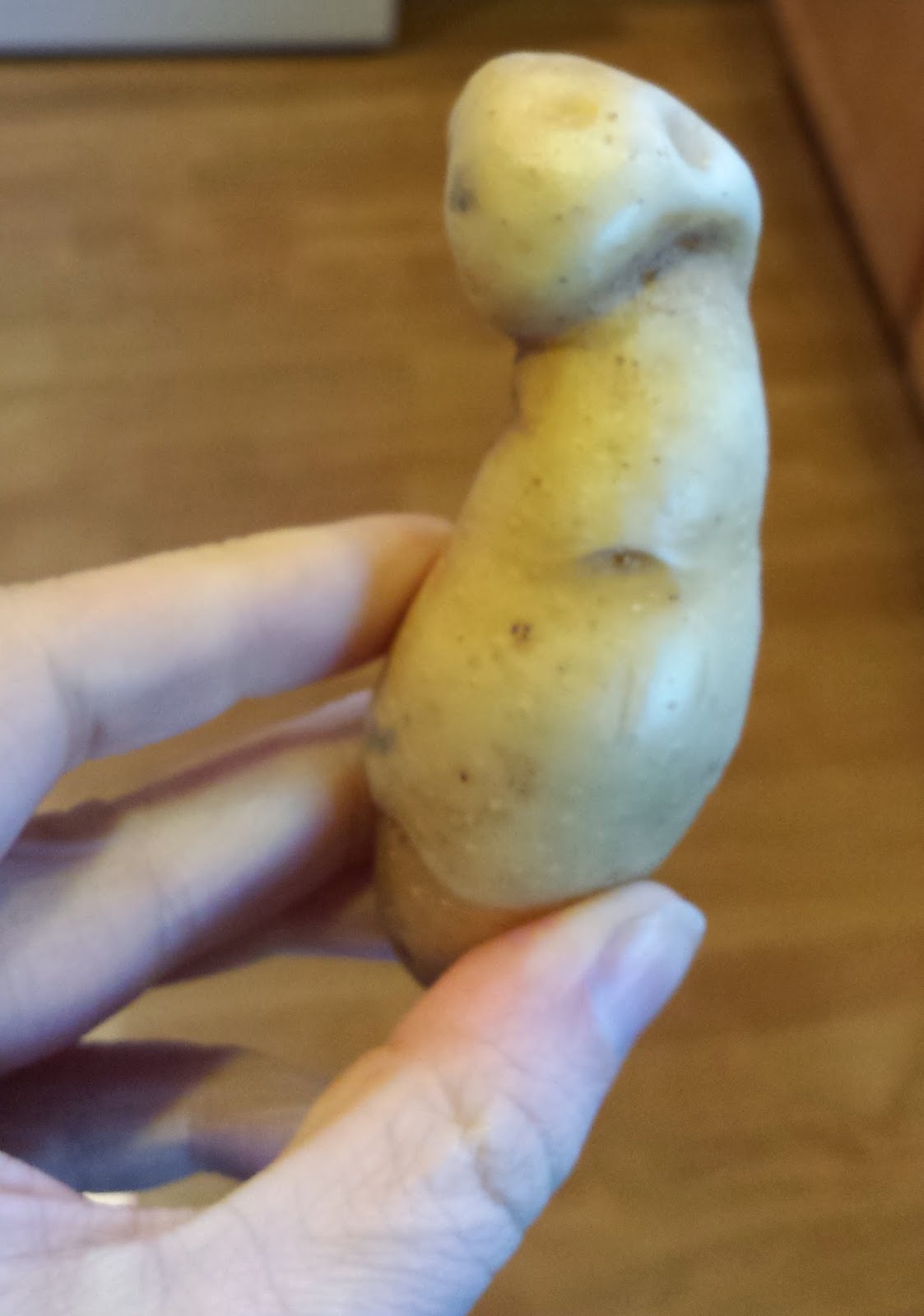 We also got a small bunch of stinging nettles, which if you have never had, you really, really should.  They are kind of scary because they will eff you up if you touch them raw.  But once you know how to handle/cook them, nettles are delicious and incredibly nutritious.  If you can find them at a local farmer's market, or if you know where to go pick them in the wild, you really should make the effort.  They are loaded with potassium, protein, vitamin A and fiber, and also have such a delicate flavor.  You do have to handle them with care until you cook them or they will sting the shit out of you, so I had to snip the leaves off using tongs and scissors! 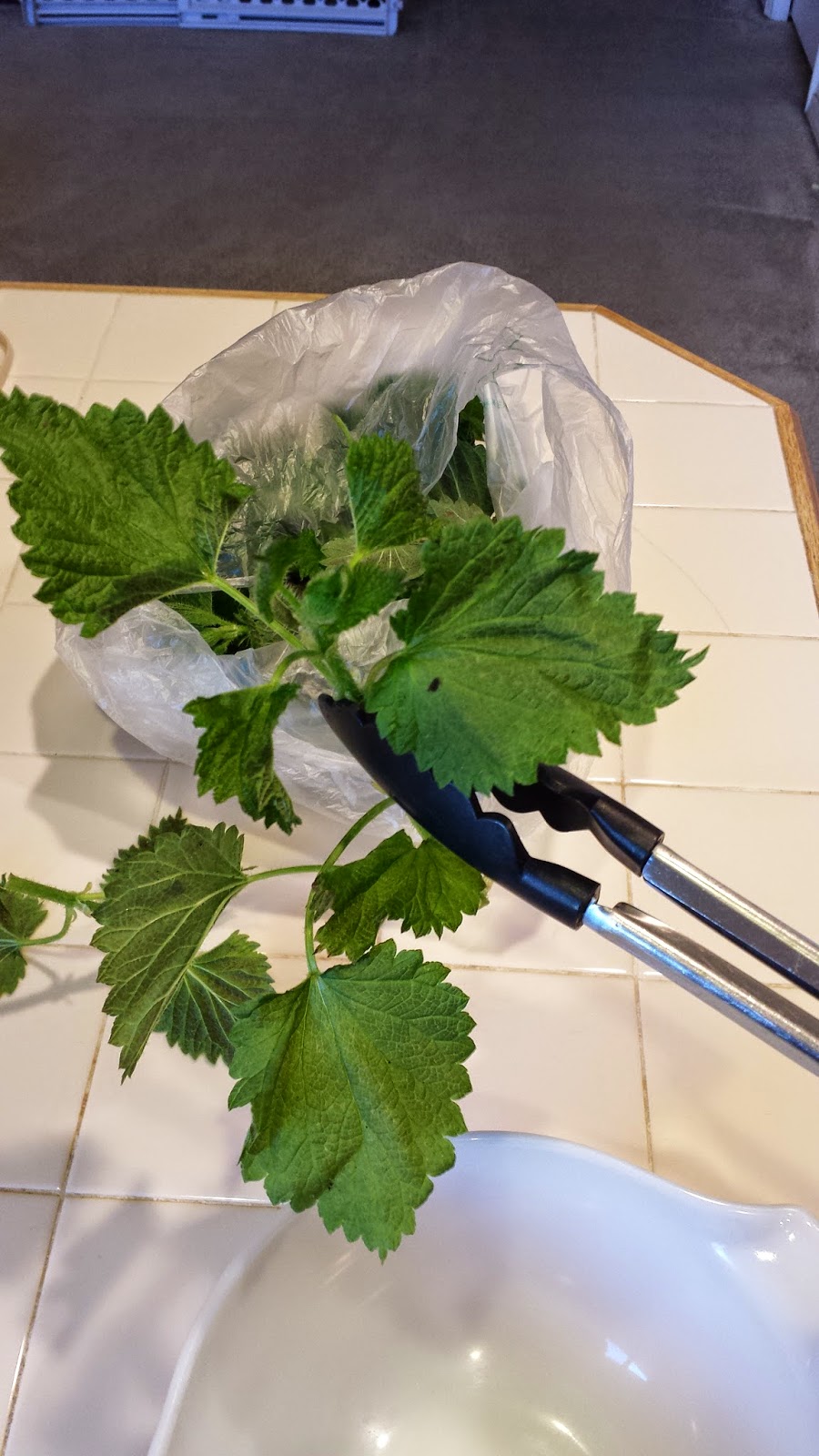 Once I boiled the stingers off I didn't really have enough to do a side of sauteed nettles, so I decided to fold the cooked nettles with some shredded cheese into biscuit dough. 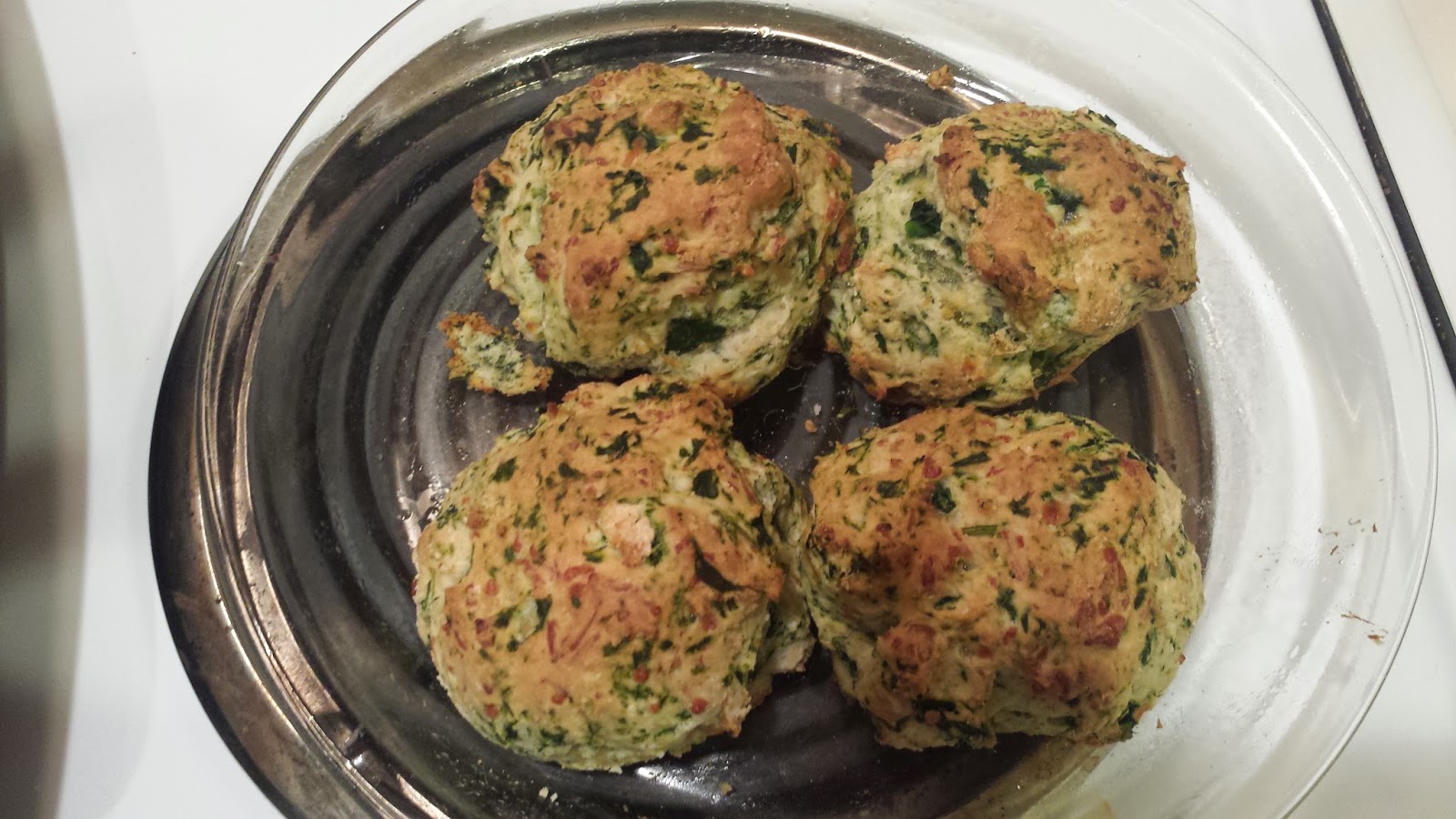 The nettle biscuits were so delicious!  The cooked nettles have such a delicate flavor that it worked well with the biscuits.  Buttered?  Even more glorious.

These are the types of dinners that make me so grateful to live in Oregon, especially since we were able to grill our lovely steaks outside!  I love being able to work with fresh, local ingredients.  I only wish I had been smart enough to get a bigger bag of nettles!
Posted by Runs To Get Waisted at 7:44 PM