Just so y'all know right off the bat, I'm a little punch drunk this morning because I had a bout of insomnia last night, so I'm not exactly firing on on cylinders.  (You:  "Are you ever?")  If I say something that doesn't make sense (You:  "Again..."), you'll have to forgive me.  But you always do.

Sorry in advance to the menfolk reading, but I am dealing with the beginnings of my TOM (or as my friend Desiree brilliantly calls it, Shark Week), so my hormones are raging and it's completely frustrating.  For the last two days I've felt like I am in constant state of starvation and have absolutely no energy.  I've had this insane urge to eat everything in the house.  For the most part I have not, but yesterday I broke all the rules at dinner.  I made the wonderfully yummy potato salad recipe from my Runner's World cookbook, and it's by far one of my fav recipes from it because it's just perfect in every way.  Super tangy from the dressing, salty from the capers and tons of hot herb action from the mint/scallions.  Long story short, I wolfed down my portion, and then said "F it" and went back and demolished most of the batch.  Definitely no slow or moderate eating involved, I was in complete obsessive autopilot mode.  I felt so uncomfortably full after dinner that I wanted to slap myself, but in another way it at least hushed to obsessive "I'm hungry, I'm hungry, I'm hungry" mantra going on in my brain.

I don't feel terribly bad about it overall.  I mean I do, obviously it's not good to overeat or get bingey, but I'm objective enough and know myself well enough to know that this was all hormone based.  I've been doing everything right from a nutrition standpoint the last couple of days, I'm just genuinely hungry.  This isn't something like Nutella or cold cereal where I will eat it obsessively until it's gone anytime it's in the house.  This is just how I am for a couple of days before "Shark Week" begins, and I know it's temporary and will be over soon.  All I can say is thank God we don't keep many treats or chips in the house.  If all I have in the house to overeat is a healthy potato salad recipe, then I guess so be it.

Speaking of Runner's World, I realized by the day's end that I had made something from my cookbook at each meal!  I listed what I ate below, and thankfully there are links to everything I made so that you can enjoy them too!

That Asian noodle salad was fantastic, although next time I would personally wilt the greens a little because the texture of them against soft noodles/eggs just didn't set well with me.  You know what else didn't set well?  That my dog is a complete turd and touched that piece of lettuce with her mouth, causing me to have to give in and give it to her because, germs.  She is obsessed with lettuce! 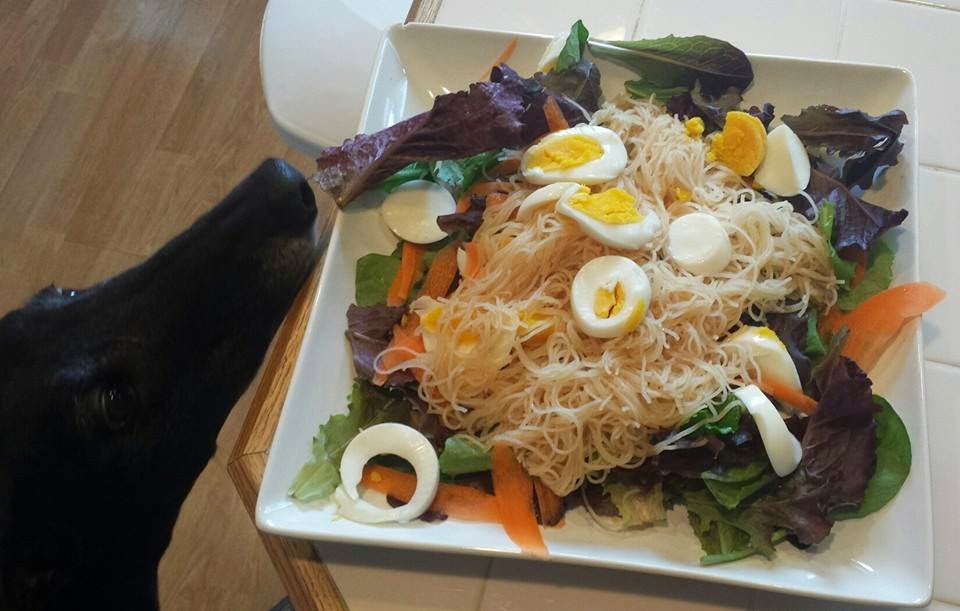 My plank was difficult yesterday but I managed to eek it out.  I'm going to go on a long walk today because I haven't all week, and I'm feeling crabby after not exercising all week.  I'm also feeling stressed and need to clear my head, so the walk will do me good.  I'm going to try for a longer run this weekend.

So there has been a lot of hoohah online about that study that was released on jogging vs running, and that running hard or a lot may pretty much kill you.  Just thought I'd weigh in with a few thoughts:

Now if you'll excuse me, I've got to get off my tail and actually go move my body!

Posted by Runs To Get Waisted at 8:21 AM