Not a ton to report on Cough-pocalypse 2015, I am slowly getting better but am still having life altering coughing jags that require mighty amounts of hot tea in my hand at all times.  The strength of my kidneys has surely been tested the last few days.  Physically I feel better, plus I am getting more sleep than I was though not by much.  Last night was about 6 hours, I am still having issues with coughing while laying down so I don't really get a restful sleep.  But I'll take anything over not sleeping at all.

I did crack up at these step charts on my Up band.  This first chart was on Monday, which was easily my lowest moment of the week.  I had slept 6 hours over 2 days and was having panic attacks because I couldn't breathe.  Also note that my steps start at 12:35 AM because I was a zombie lady that day: 1,987 is insanely low, like even at my laziest my steps aren't usually that low.  1,987 steps translates to me staring sadly into the abyss while sitting on the couch and coughing.

Before I show you my step chart for yesterday, let me set the scene.  I'd had 7 hours of sleep, woke up feeling pretty good, and it was a stunningly beautiful day here yesterday.  Like, Portland broke temperature highs for the day (sorry Midwesterners and East Coasters, I don't say that to rub it in).  I was like a woman freed from death row. 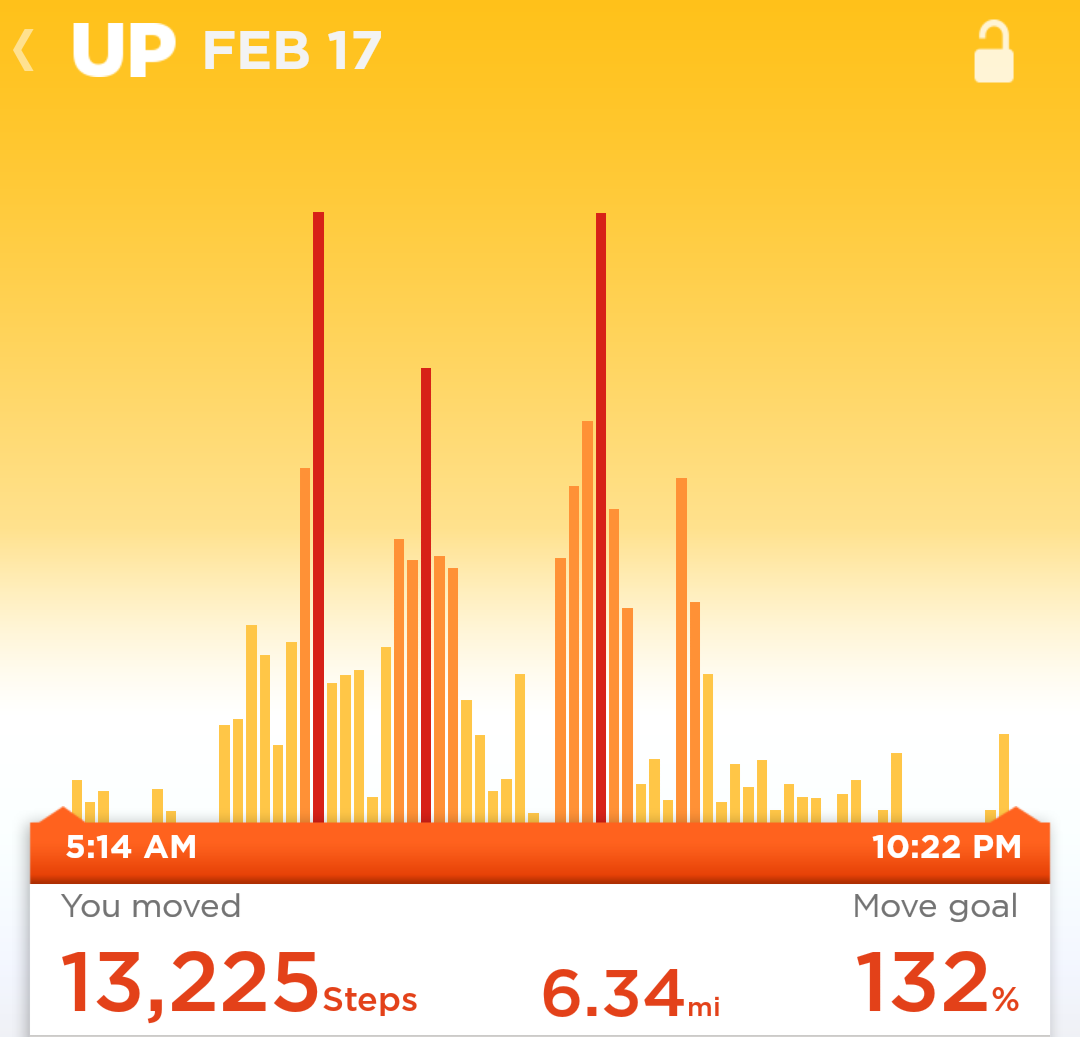 Can you tell that I felt better and that I was slightly climbing up the walls from the need to get outside and move my body?  I took a trip to the store and walked the dog twice I was so excited to be able to leave the house.  I also Lysol'd the shit out of the house AND made a king cake for Mardi Gras.  I got more steps yesterday than the previous 3 days combined, and I'm not even joking.

Last night was so much fun and a nice break from being sad over how crappy I've felt.  We had my aunt and uncle over for dinner and to binge watch the first three episodes of Better Call Saul.  If most of you couldn't tell, I have a total lady boner for all things Breaking Bad, for me it's up there with Twin Peaks and Seinfeld in The Best Shows of All Time category, if not THE best show of all time.  BB ending left a huge hole in our TV shows we really care about lineup.  I don't even want to start a new TV show because I don't feel like anything could even begin to fill BB's shoes!  (yes, I'm aware that's over dramatic and silly) I have been cautiously hopeful about Better Call Saul (BCS), but have not wanted to get my hopes up.  I have to say, while it's too soon to tell if it will be on the level of BB, I've been very pleased with BCS so far.  Bob Odenkirk is great, and seeing familiar characters is pretty awesome.

Yesterday was obviously Mardi Gras, and I wanted to do something to celebrate it.  I made a playlist of some Mardi Gras classics for us all to listen to during dinner, and I also made a king cake for dessert as a surprise! 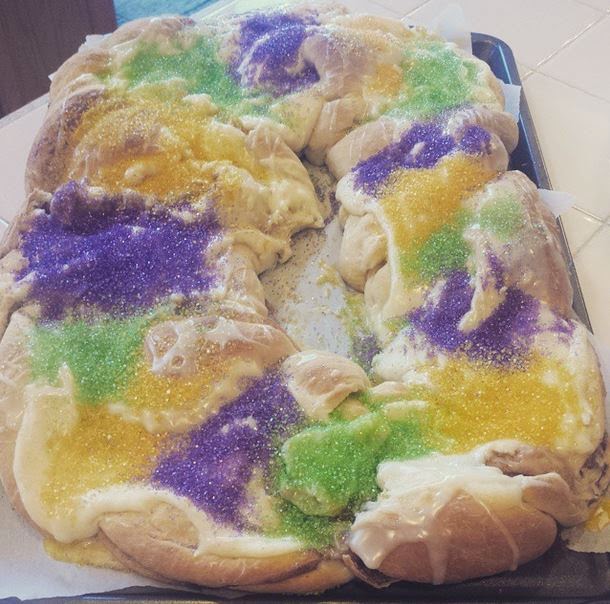 I was very happy with how it turned out, and thought I got it pretty close to the ones you can get back home.  It's the first successful king cake I've ever made and I'm pretty excited about it since it's something I really miss.

Now I have to admit, I get uppity and frustrated on the subject of king cake and Louisiana cuisine in general.  I love Portland, I truly do, but I get pretty annoyed at some of the attempts to take on what is a very unique culture and cuisine.  One of the things that drives me bonkers (probably unnecessarily so) is that there is a difference between Cajun and Creole, yet people label all Louisiana food as "Cajun".  Really irritates me. Also irritating is trying to educate people that dumping a shitload of pepper into something doesn't make a dish Southern.  One of the dishes I see trying to be most replicated and most butchered by silly Yankees is king cake.  I don't know why it gets butchered so badly because it's not a difficult pastry in theory, but I've never had king cake up here that wasn't screwed up seven ways to Sunday.  And it makes me sad, because I have the feeling that people have the impression that king cake is gross, but it's only because they're having bad impostor king cake.

Here is what king cake IS:  Rich in history and tradition, a texture between cinnamon roll and hallah, moist (I hate that word but the only one that can describe it!), delicately balanced between pastry and filling, and sweet but not overly so.  (Hint, the secret to this is citrus zest). The flavors should be layered and balanced (earthy yeast in the pastry, spicy cinnamon, tangy glaze/cream cheese filling and crunchy sugar topping).  There is also no light, gluten free or vegan shortcut that is going to result in traditional king cake results.  Sorry folks.  That's why this is eaten once a year, it's a big egg/icing/butter/gluten party.  And to the people that I've seen make fun of the colors, um, that's traditional and the  3 colors represent different things.  Educate ya-self.

Here is what king cake is not:  dry, heavy on bread texture, rolled vs being braided, too heavy or too light on icing and sickly sweet.  If you see king cake that looks like this... 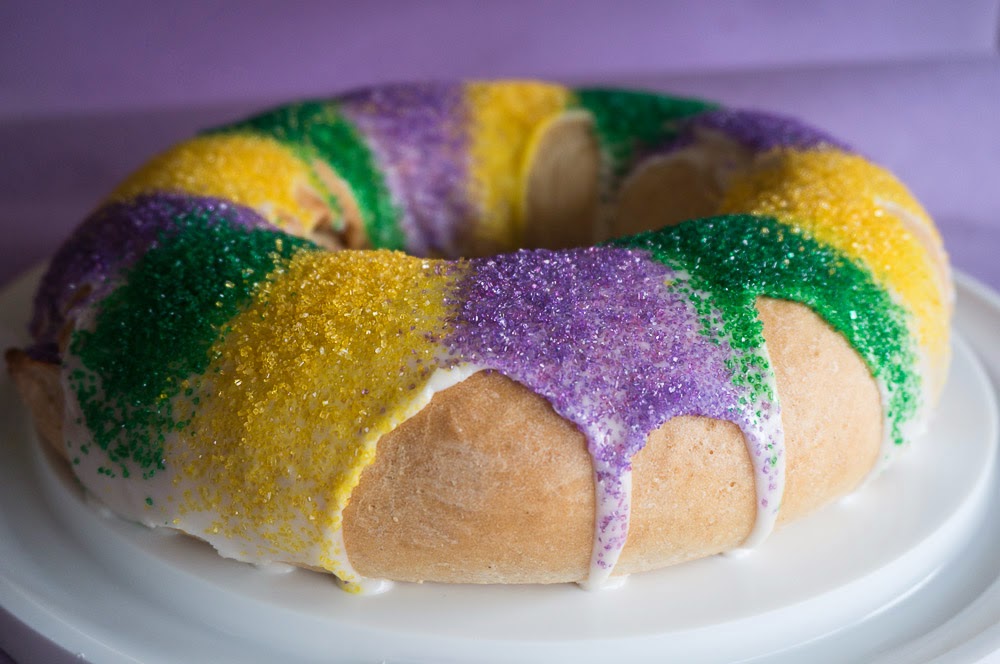 as opposed to this... Just don't bother.  Run away and save your money.  That puffy looking one means that the dough has been rolled, which will mean 2 things.  Not enough filling and it will be dry as hell.  It will be like eating three day old coffee cake with Betty Crocker icing on it.  King cake is traditionally braided, which means a better distribution of pastry and filling, plus it cooks faster and will not be dry.  It also means the glaze and filling can really get into all those lovely braided crevices which will lead to more gooey results.

This is the recipe I used, and it's supposedly based on the Haydel's king cake recipe which is my favorite king cake from back home.  I agree that it is really close.  My aunt and uncle really liked it, so I am going to start making this every year!  The orange/lemon zest is what sets this apart and gives it the traditional taste, and also what keeps the sugar from being overpowering.  The cream cheese filling is to die for, seriously.  The one thing I will caution you on, and the one direction you should NOT follow from this recipe is to bake the plastic baby in the cake.  I don't know what this lady is thinking, but for God's sake don't bake plastic.  The baby (if you're using one) is always stuffed in the cake after it has baked and cooled!!

Anyway that's my little cultural lesson for the day!
Posted by Runs To Get Waisted at 9:21 AM