I've had a few of these close calls in the last few months, but I am pretty certain I'm getting sick.  I really hope it passes like it did all the other times I thought I was getting sick, mainly because I will be flaming pissed if I get sick before this Mardi Gras ball that I have anticipated for 3 months.  I mean seriously, I Youtubed how to sew just so I could make a costume for this damn thing, I refuse to get sick!  I was going to do a run today, but I may just walk and then come home and take it easy.  SIGH.

On a nutritional related front, I went shopping yesterday because I was out of a few random staples.  I usually wait until Fred Meyer has a 2 for $5 deal on their organic eggs, but went to our fancy foo foo New Seasons instead since it's close to where I go walk.  I just about fainted at the cost of eggs there, and this was just the normal store brand eggs, not even the fancy "the chickens were fed only with fair trade bugs and grass clipped from the top of the Andes mountains" eggs.  The other thing I noticed?  Brown eggs are $2 more than the white ones.  This is a trend I've noticed lately, and I wondered if there was something to it and brown eggs are indeed more nutritious...right before I got the white eggs since they are $2 cheaper.

I went home and did some seriously scientific research (ie an internet search), and the bottom line is that there is no nutritional difference between brown and white eggs.  You are paying more money just based on the color of the shell, which then gets thrown into the garbage.  Some people swear that the yolks of brown eggs are different, but as a country girl I can attest that the only thing affecting the yolk is the hen's diet.  A diet rich in grass/bugs equals that beautiful orange yolk you see in free range eggs.  A grain diet or a winter diet where the hens have less grass/bugs available equals paler yolks.  To quote my spirit animal Jesse Pinkman, "Yeah bitch, science."  So, buy whatever you like.  I do prefer to get the organic or free range eggs since I like chickens and don't want them to be cramped in sad warehouses.  (side note...I had a typo on warehouses so spell check flagged it and suggested "whorehouses" as a spelling alternative.  I mean....)

This led me to the old brown rice vs white rice debate.  I personally like both, although as far as love and affection go, I do love white rice.  I know some people hate brown rice, which I don't really get unless it's a texture thing.  Much like steel cut oats it's a pain in the butt to cook, which is probably why I tend to make white rice instead.  I posted a chart below, and the bottom line is that brown rice does edge out white from a nutritional standpoint, but honestly not by much.  The places where it trumps white are pretty negligible, and there is only a 20 calorie difference.  Brown even has more sodium and fat, though again, not by much. 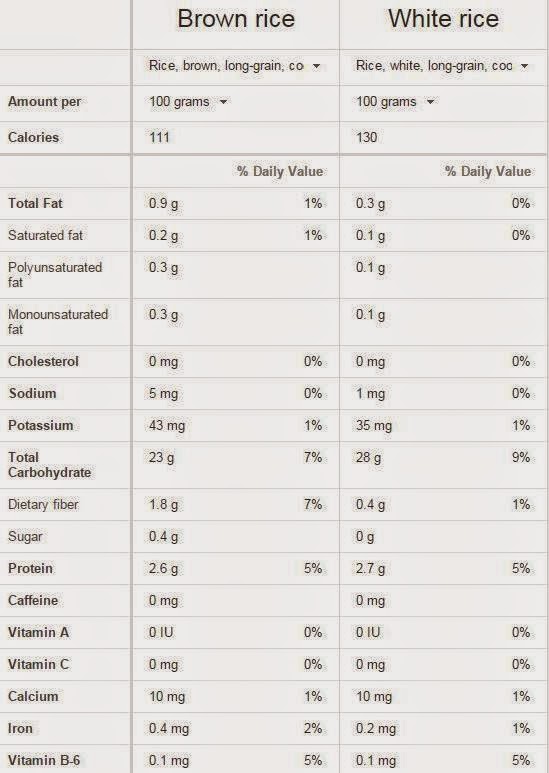 The other fun fact is that arsenic naturally occurs in rice and brown rice has 80% more arsenic than white rice.  This may be of interest to those of you with kiddos, because the FDA is recommending that due to arsenic levels in rice that kids shouldn't eat more than one serving of rice based foods per day.  If you're interested in learning more, this Consumer Reports article from November breaks things down pretty well.  Bottom line, brown is a little better, but if you hate it then eating white rice isn't going to hurt you.  And ultimately, don't eat too much rice or you'll be like the Dollanganger kids from VC Andrews' Flowers in The Attic due to the arsenic content.

I thought I'd end with another Mardi Gras song today, another one of my faves by Oliver Morgan.  This whole story is kind of a big casserole of sadness, but the song is about a New Orleans singer (Lawrence "Prince La La" Nelson) who died of a drug overdose under mysterious circumstances, ie "shot" being heroin and not a gunshot.  The man who wrote and sang this had his house destroyed by bitch ass Hurricane Katrina and had to evacuate to Georgia where he later died of a heart attack.  #Depressing.  Anyway I know that I have not set up a big time party atmosphere, but I had to tell the story so y'all weren't  like "what the hell is a lala and who shot him?"  This song is really great and always comes up around Mardi Gras, so go pour one out for Oliver Morgan and the Lala.