Why You Can Marathon 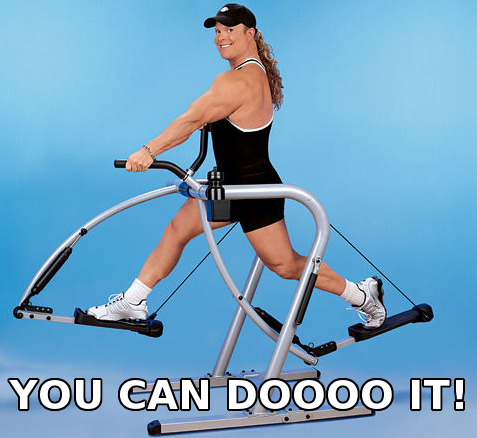 So I wanted to address a common thing I hear when I tell people I'm running a marathon.  I heard it the last time and now I'm already starting to hear it again.  Besides the typical "You're crazy" comments, I always have people say things along the lines of "I wish I could do that" or "I have always wanted to do that but I'm just too scared.  I don't think I could make it through."

Yes you can.  When I ran Portland I was probably 230 pounds and had not trained properly at all.  I did it with a hurt leg for the last few miles and still finished it.  If I can, I know you can.  If someone walked up to you right now and looked you over then said, "You'll never be able to do a marathon, you're not tough/fast/strong enough", would you murmur "You're totally right" or would you say "Screw you!"  (I would also like to think you'd throw in a dramatic gesture such as throwing a martini in their face after saying "screw you", but that's only me projecting because I've always kind of wanted to do that to someone.  It's so Dynasty.)  My larger point is, you wouldn't put up with someone saying it to you.  So why are you putting up with YOU saying it to you?

I am telling you that you can do it.  You can't do it today maybe, but you can do it if you put your mind to it and train and run it a few months from now.  And that's what it's all about, picking a training plan that will work for you and trusting the training.  It's like the proverbial slow boiling of a frog.  You don't just go out day one and run 20 miles.  It increases so gradually that all you can do is think week to week.  Of course you can't start out doing an 18 mile jaunt, but suddenly one day, you can.  And that's when the training runs hold a strange beauty to them.  When you look down at your Garmin and are like, um I just did 16 miles.  It's pretty powerful.

I am not going to sugarcoat it.  The training really, really sucks a lot of the time.  Some days the level of suckage is worse than others.  It's time consuming.  You're hungry.  You're tired.  You hurt a lot.  You will probably cry a few times, maybe even in public.  Sometimes you almost poop your pants.  Your butt cheeks chafe.  You quickly learn where the hot spots are on your feet, so your foot routine because a lengthy session of "What do I have to tape up before I even put my socks on".  Every mental demon you've ever had will dredge itself up when you're out there running.  I run alone and without music, so it was especially bad for me.  I'm sure it will be again. You will have doubters or people telling you you're crazy all the time.  But honestly the biggest obstacle and person you'll have to overcome is yourself.  But you can and you will.  As I like to tell people, a marathon will be the best and the worst experience of your life.  But marathons are kind of wonderful.  You will see a whole spectrum of people out there, just like any other race.  Fat, thin, old, young, people on two feet, people in wheelchairs....they're all out there, plus everyone in between.  You fit into the spectrum too.

Since I don't expect anyone to dig back into my 2013 posts, I wanted to post links to my race recap from the Portland Marathon, as well as a final thoughts on marathon running post.  If you have doubts or are on the fence, I hope those help.  And yes, you can totally give me crap for saying "oh I'm never doing another one", since here we are a couple years later..  If you want to dive more in depth, I started training in July of 2013, so you can read all of those posts up to October to see what training was like and where my head space was at.  There's a ton of whining about how hot it was.  *cue Mary praying for the coldest summer on record for 2015*

The last time I did a marathon I had a few people tell me that I inspired them, which made me so uncomfortable because I didn't feel very inspiring at the time.  I didn't train right, was overweight and was at a job I hated because I was "supposed" to be.  Things are different now, and now I hope I can inspire someone along the way and to make them feel empowered enough to take on a marathon, or whatever seems challenging and impossible to you.

Anyway, that's my little Saturday schpeal.  I'll go back to my regularly scheduled bitchy programming here on the blog tomorrow.

Posted by Runs To Get Waisted at 9:32 AM