We were busy bees this weekend!  Yesterday we decided to go for a nice brunch on the Columbia river at this place called "Salty's on the Columbia".  We had a really nice time and I loaded up my plate with steamed crab legs, lox and fruit.  My big splurges were a Bloody Mary (with about a gillion olives)  and a few items at the dessert bar:  one marshmallow and one strawberry, both dipped in the chocolate fountain and a tiny chocolate mousse.  I took a fancy panoramic picture of the Columbia river, but I don't know that it did it justice, especially since it was foggy.  We were at a window seat and it was very relaxing watching the water.

After that we drove to the Portland Art Museum and walked around, which we like to do once a year just to kind of check out what's new there.  We've definitely seen better things there in past years in my opinion.  Three years ago or so we saw Raphael's "Woman with a Veil", which was super cool.  There have been various Warhols loaned to the museum that were interesting, plus last year they had bunch of Chinese art that was beautiful.  This year we got this wonderful work of art: 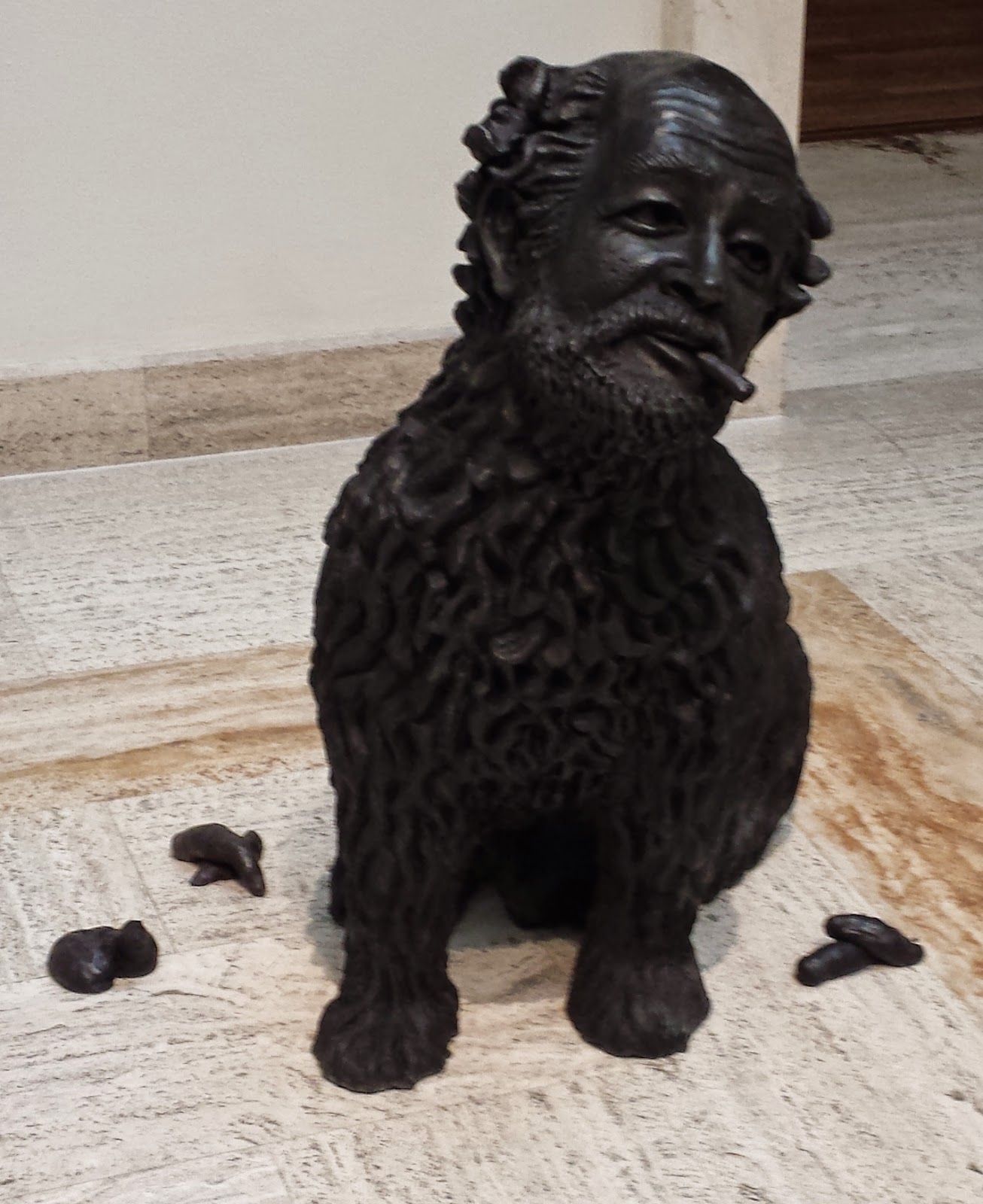 Yes, that is a dog with a man's head, smoking a cigar, surrounded by poop.  Yes, I also think it's utterly stupid.  Maybe that makes me uncultured and not "arty" but seriously.  One thing they had that was pretty cool was this exhibit called "Forbidden Fruit".  The pieces looked old but were actually recently done by a local Portland artist, and it's going to tour to some other museums after it leaves here in February.  Hard to describe, but basically they were a bunch of naked people being naughty, but they were so beautifully painted and in such detail.  I took a picture of one of my favorite parts, this really realistic looking tower of fruit.  You can also see the bigger main piece to the left in the mirror reflection, but it was of a lot of naked dudes at a table, so I figured maybe y'all weren't into that. 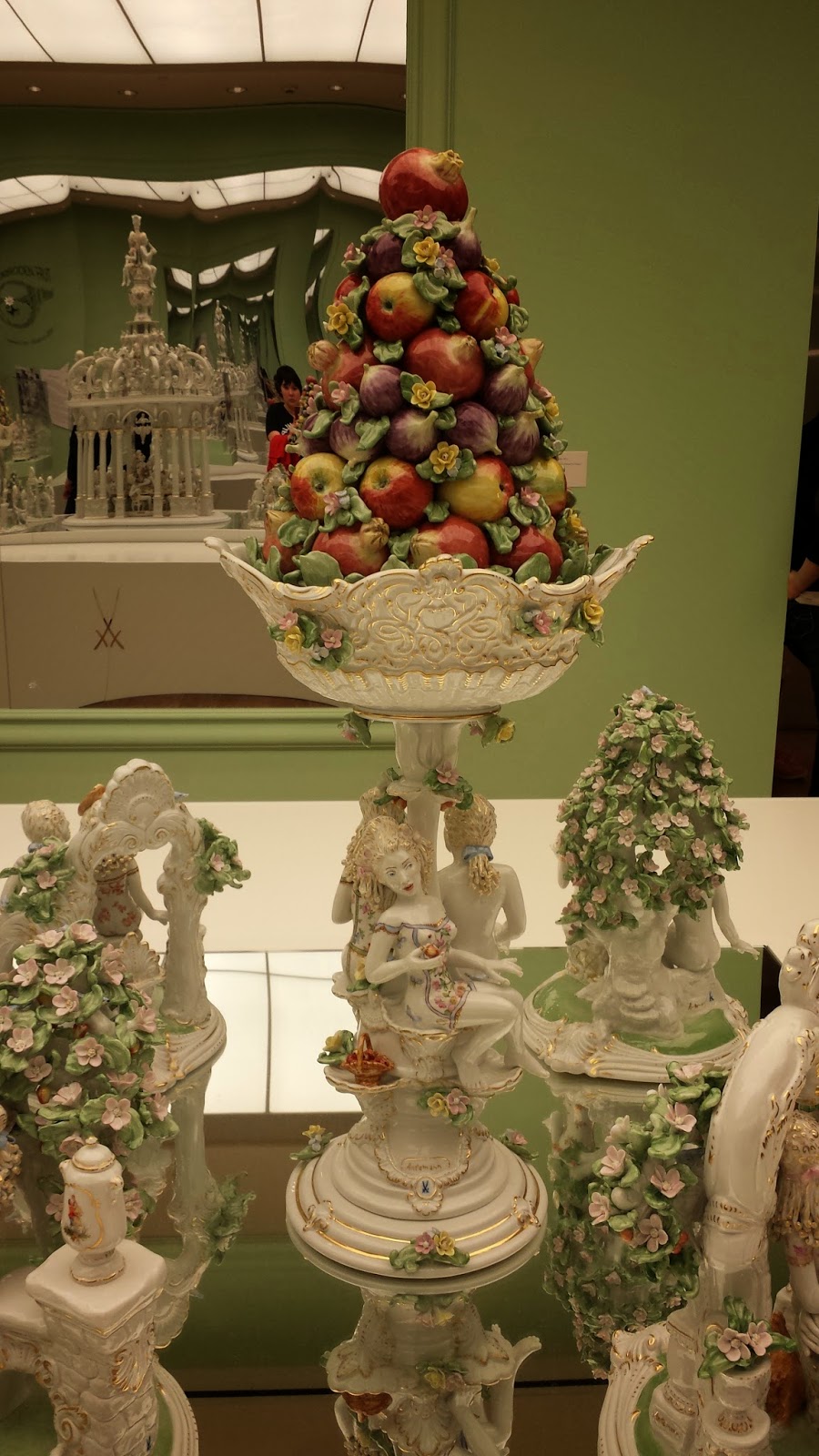 And I took a picture of us standing in the mirror, because for some reason it really made us look super skinny.  I need one in my house!! 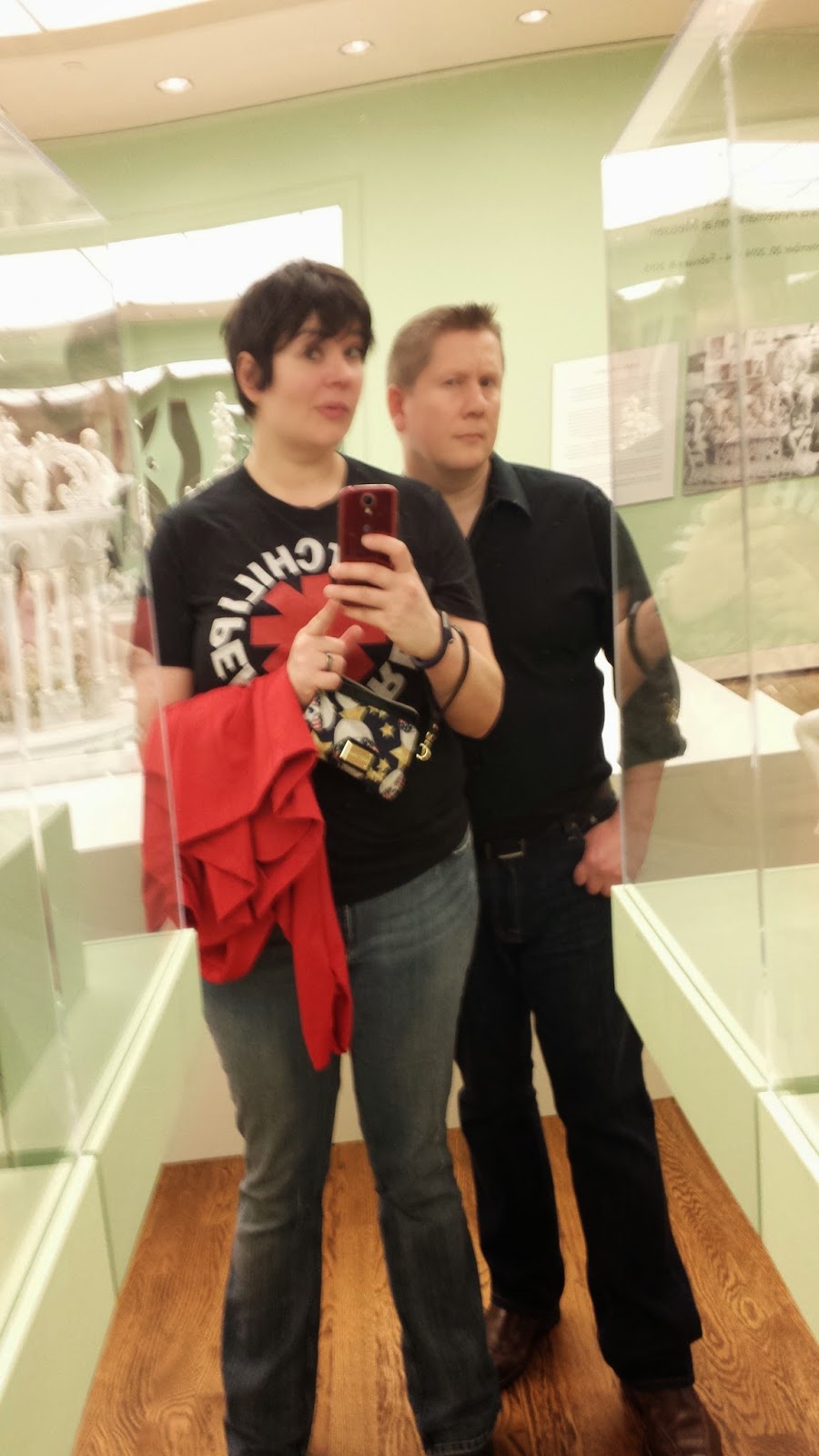 Today was spent taking down all of our Christmas stuff, which is a little sad but also kind of a relief to get down and put away.  We did a better job of organizing and labeling our decoration boxes, so next year should be a cinch.  Glad that at 35 I have finally figured out that organizing will make my life easier.  ;)

I've done well with food and exercise this weekend, although I am really battling these back issues.  I did all my challenge stuff yesterday but fell woefully short of my step goal, despite walking around all day!  Today we took a 2 mile walk and then obviously were busy with taking down decorations, so I should have more steps in.  As I said, I have battled yet another back issue all day today, and it's really pissing me off.  The pinching on the right side of my lower back/sacrum area feels better, but I somehow wrenched the left side this morning.  Bending over is absolute agony, as is walking up the stairs.  I mean it's like, seriously???  I'm just sick of being hurt all the time, especially when it's weird spine or joint issues.  Muscle soreness I can handle, but this just sucks.  I have challenge stuff to do, but it's squats and weights, so I'm not sure if I should do it, or move it to tomorrow (technically a rest day).  I honestly want to just get it over with so that I can have a rest day tomorrow, which won't even really be a rest day because I have a run on the schedule!

I am pretty excited about dinner tonight.  I made one of the frozen crockpot meals I put together a couple of weeks ago, the chicken tortilla soup.  I tasted it a bit ago and it is pretty good.  I forgot to buy any tortilla chips to go with it, so I'm just going to have to toast up one of my sandwich wraps, lol.  It's not like I really needed a bag of chips hanging around the house anyways.  It's been that really damp type of cold lately that seems to penetrate into your bones, so a hot cup of soup with a little cheese will hit the spot.

Posted by Runs To Get Waisted at 4:09 PM