Super excited today about a couple of things, so let's get right into it.  Today was weigh in Tuesday and I am at 209 on the nose, which means I lost 2 pounds this week.  Literally don't know how that happened because I was less active due to my back, but I will obviously take it.  I weighed myself 3 times just to make sure!  Not much to say other than I'm going to keep plugging along and getting it done.

Now for the next thing, and disclaimer to my dearest Oregon friends who read this blog and are Ducks fans....you may want to skip the post today.  Know that I love ya, but you may want to stop reading because I'm going to be a big old bitch, but only in this one post.  Then I will go back into my groundhog hole of silent spite until next winter.  So last night was the big college national playoff game between the Oregon Ducks and the Ohio Buckeyes.  Oregon lost big time, and you know that scene in Return of the Jedi when Emperor Palpatine is cackling while Darth Vader/Luke Skywalker are fighting and says "Good, good"?  Yeah, that was me. 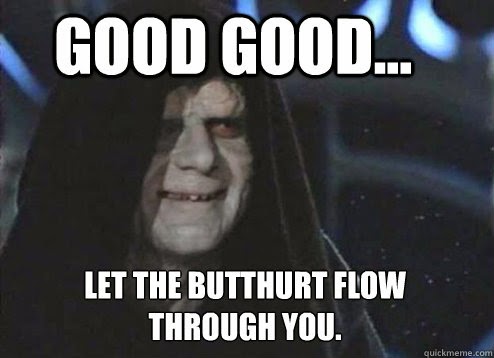 Over the years I've really grown to dislike anything Ducks.  It's hard to describe the insanity up here, but people here are disproportionately rabid about them, and the longer I live here the more it irritates the shit out of me.  Almost the entire sports section of our paper is all Ducks related every day.  The local newscasts up here are unbearable when the Ducks are doing anything, and it is not unusual when "important" game stuff is going on for 20 minutes of a 30 minute newscast to be about the Ducks.  I shit you not for the past week our weather forecasters spent the entire forecast on the weather in TEXAS where the game was being played.  Nevermind that not only is the game in a dome and the weather doesn't matter, but it's NOT OUR STATE.  The worst part is the fanbase, who I find is incredibly smug, pompus and over the top about rooting for the Ducks.  It turns people who are normally nice people in every other aspect into crazy people.  It's hard to describe.  I thought LSU fans were crazy about the Tigers (sorry Des and Bitsy!), but they have nothing on Ducks fans.  I really enjoy football, and I root for the Saints/Bills with pride, but if they win or lose my day goes on just the same.  Ducks fans go insane when they win, and gnash teeth, wail and pout when they lose.  It's like a toddler who never gets told "no" being denied a candy bar.  You would think their loved ones were assassinated or something.  It's the craziest thing I've ever seen.  As a Southerner who grew up in SEC territory where everyone is crazy about football, even I am saying "Y'all need to get a damn grip".  Seriously.

I think some of the issue is that we don't have an NFL team, so football fans cling to Oregon even though they didn't go to the college because they need someone to root for.  Which ultimately that is what irritates me.  Colleges are like their own little society, and I find it incredibly weird to foam at the mouth about a college that you didn't even go to.  I somewhat excuse foaming at the mouth if you graduated from UO, but most people who are fans didn't attend UO.  I personally find that a bit bizarre.  NFL is one thing because that's a state thing, and people have various reasons for being affiliated with a certain state.  My hubby is from the Buffalo area and I consider that my second home, so I root for the Bills.  (no one can accuse me of being a bandwagon fan).  I root for the Saints because I'm from Louisiana.  With college it's like, if you didn't go there why do you give a crap?

So anyway after a full month of Ducks in local news, local newscasters saying that Texas police stopped the Ducks bus because they were "leaking awesome" (not kidding), Ducks in my paper, and pompus fans bragging that the Ducks were going to blow Ohio out 50 something to 10, Eric and I were both just about crazy.  We were silently begging every deity known to man (including Zeus) for them to please lose.  Eric was at dinner with one of his friends and I was at home, so we were texting each other throughout the night.  He was at a bar and was quite gleeful in telling me how quiet it got once Ohio pulled ahead.  We can't describe the relief at them losing, I really can't imagine what the news would have been like if they'd won, not to mention the quacking and puffed chest prancing around of the fans.  (You think I'm joking, but they quack at each other.)  I enjoy a good dose of humility where it's deserved.  I know that's incredibly mean, but I feel pretty justified in having one day of joyful spite after enduring months of over the top arrogance and crazy.

Anyway, that is my little rant for the day.  The hourglass until next year when all this crap starts up again and my silent resentment begins to build, has been officially turned over.  ;)
Posted by Runs To Get Waisted at 8:26 AM