So yesterday I was a scheduling/goal setting fool.  I evaluated my back injury vs my January goals, and I decided to take the strength training stuff off the table this month.  So, no dumbbells, no plank/donkey kick stuff, no squats.  I just feel like it was the right call in light of the fact that my back is still messed up, and I feel like moving to much too soon with the weights is what caused it.  My new goal is just an activity every day except Tuesdays, (either a long walk, a run, Richard or yoga).  Although having more muscle definition and being stronger is a goal, I still feel that when you look at the bigger picture, I'm consciously doing something active almost every single day.  That's huge for me and something to be proud of.  I was doing just fine kind of doing yoga, aerobics and whatever else I could fit in when I started back in October.  Perhaps I can reevaluate in February.  I did keep my step goal of 375,000 steps, which I honestly doubt I"ll hit, but I am going to do my absolute best to hit!

I also made a daily schedule for myself.  Now that I am job searching, I feel a ton of anxiety and feel like a chicken with my head cut off.  When I get in that headspace I tend to work myself into such a frenzy that I can become paralyzed and not do anything, so I decided to have a strict schedule every day with time slots for all the important stuff I need to get done.  Exercising, job searching, etc.  I even included an hour at the end of the day before Eric get's home to work on projects for the house.  That way I know exactly what I'm doing, when I'm doing it, etc.  I even set little alarms on my phone to remind me when to change from one mode to another.  I felt much more relaxed and prepared once I got finished making my schedule, so I think it will be super helpful going forward.

Today has been different because we had to have fence guys come over to fix a section of our fence that's all janky.  It got half blown over when we had that bad windstorm (the one that knocked out our power), and pretty much the only thing holding it up was our grill and our neighbor's grill.  Eric worked from home and needed our laptop, so I had to busy myself in other ways.  I took Molly for our usual little walk.  I dressed us both better this time, but we were both still freezing, so we only managed a little over two miles.  We had a funny little encounter during our walk.  My neighborhood sucks for walking (no sidewalks and unleashed dogs) and I don't really feel that safe, so I drive us over to a nicer more well-to-do place to do our walks.  It's mostly old people and rich Intel employees that live over there, it's quiet, everyone acts with some sense, and I don't encounter things like meth pipes on the ground.  Anyways, I see the same people all the time (Eric tells me I'm like a live version of The Truman Show), mostly old peepaws out doing a morning stroll.  They all like to carry on over Molly, which she really enjoys.

This morning I was wearing a sweatshirt from my college (SLU), which unfortunately has the same colors as the Oregon Ducks.  Whenever I wear this particular sweatshirt, a lot of people mistake me for a Ducks fan because they see green/gold (Even though our mascot is a freaking LION, which does not look like a duck and my shirt says "Southeastern", which does not look like "Oregon").  I would honestly rather be mistaken for a Nazi war criminal than a Ducks fan, so I get pretty irritated about it.  Anyway, this old guy I see all the time apparently was an Ohio graduate (the team they're playing next week in whatever godforsaken championship game is going on), and he mistook me for a Ducks fan.  (Note to self, remind me to burn this sweatshirt lol.)  I quickly corrected him, and we got on the subject of football, and he sang some fight song about the rivalry between Michigan and Ohio as we were standing in the middle of the street.  It just kind of cracked me up.  I have my little peepaw posse for sure.

I wanted to leave the post with a book recommendation.  I have been an avid reader since childhood and just devour books, or at least I did until the demands of my job just got to the point that I was too exhausted and brain dead every day to commit to reading anything more than a magazine.  Anyway, besides the million other benefits of leaving my job, I discovered my joy for reading again and have again been devouring books.  I didn't realize how dead and desensitized I felt from sitting around watching TV or looking at my phone all the time.  When I'm reading, nothing and no one else exists, which is really nice.  I am really enjoying my latest read and thought I'd pass it along: 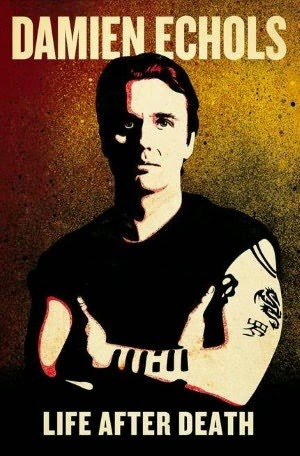 I am not sure if anyone is familiar with the case of the "West Memphis Three", but in a nutshell these 3 teenage boys were falsely convicted of killing 3 young boys back in the 90s.  The case was clearly botched by local police, who labeled the boys as "satanic" simply for liking heavy metal.  They all went to prison, but the main boy Damien Echols was sentenced to death row.  Several celebrities such as Johnny Depp, Eddie Vedder, and Henry Rollins got invested in trying to get these boys freed, which they finally were after serving over 18 years in prison.  If you aren't familiar with the case you should really go read more about it, because it's insane, compelling and heartbreaking on all fronts.   There was a series of 3 documentaries done about the case that I would recommend called "Paradise Lost", although I could only make it though 10 minutes of the 3rd and last documentary because there was such graphic footage of the crime scenes, so you have been warned!

This book is Damien Echols accounts from his journals he wrote while in prison, just reflections of his terrible childhood and his terrible time in prison.  I am about halfway through this book and can barely bring myself to put it down.  I totally relate to the small Southern town mentality, the being labeled for liking a certain kind of music type thing.  I highly recommend the book!
Posted by Runs To Get Waisted at 6:21 PM