You know back in the 80's when they would have "very special episodes" of normally cheery TV shows, and the episode would be very serious and we'd all learn something in the end?  You know, like the episode of Saved By The Bell when Jessie got addicted to caffeine pills and freaked out about not having time to wash her hair...or something like that. 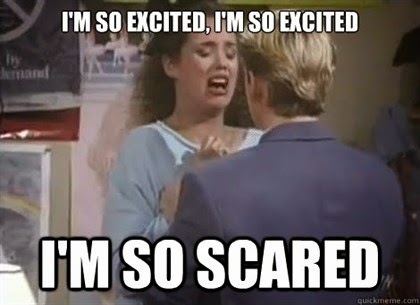 Today's post is going to be a little bit like that, and I'm sorry in advance.  I don't normally like writing heavy posts, I like to be funny or down to business.  But if I only did that then I wouldn't be honest, and I always like to be honest, because maybe someone else is feeling bummed out and my honesty will help them.  So this is a "very special post" for Runs To Get Waisted.  Unlike Jessie I am NOT addicted to caffeine pills, but I'm pretty sure I'm going through a midlife crisis right now.  If I were a man I'd buy a Corvette and start dating a buxom blonde half my age, but as a woman I don't really know what to do other than have a good cry while wearing my tattered and perfectly baggy Bills sweatshirt.  The Corvette option is definitely more glamorous.

I really, really would like a career change, but I am running into the same thing I did when I was a young'un and first started job hunting.  You need experience to get a job, but yet if you can't get a job, then you don't have experience.  Except now I have so much experience in one field that other positions I'm pursuing won't give me the time of day.  What I want to do isn't that far off from my experience in my current field, but I am either not hearing back from certain positions at all, or am just being told flat out that I don't have the experience.  I respectfully disagree with this point, plus I feel like if employers could see that I am very smart, loyal and capable that I could totally kick ass.  More and more I feel pressured to go back into my old industry and likely would be able to snap up a job pretty quickly if I pursue jobs in that field.  I thought I was fine with that, but had a mini-meltdown yesterday when I realized I'm totally not fine with it.

I think one of the worst parts of my last job was feeling like I didn't matter and that I wasn't doing anything meaningful.  I also hate being pushed out of my comfort zone, which can be a very negative thing when the push is towards forcing me to try to be a person that I'm not.  I'm an old soul, I like to come in and be very dedicated about doing my work and do a great job.  And then when the work day is over, I want to get the hell out to pursue my running/blogging/assorted shenanigans/ on my own time.  A separation of church and state if you will.  This was out of the question with my last job, which is one of the reasons you see so few posts back in 2012/2013, why my training and self esteem was in the toilet and why I stress ate/drank so much.  You belonged to the company 100% 24/7.  You were not a person.  Anyway, this new age push that you have to constantly gunning for promotion and trying to cut people's throats is simply not me.  When I look at job postings or go into interviews and hear the phrase "potential for growth" or "career path", that means if you're not gunning for promotion constantly then you will be given a side eye and considered to be lazy.  I am the opposite of lazy, but I also have pretty simple needs.  If they are being met, then I don't need to find greener grass.  If I am content where I'm at, then that means I'm happy and the employer should be happy they are doing something right.  Except I know that's never how it works.  The last 3 years of my last job were pure hell, constantly trying to come up with "stretch goals" every quarter, justify "yes, I'm doing things and am valuable" and to state how you were going to "be noticed" by higher ups and try to advance.  And I had to fake my way through, knowing all the while I didn't want any part of it.  I just wanted to be left alone to do the job I was hired for.  I even told my boss at one point that I felt like I wasn't allowed to just say "I'm happy doing what I'm doing, I don't need to be a manager."  I was told that I could state that, but then I would rank lower on the curve of the team, despite doing quality work day in and day out.

If there is anything I hate being, it's fake and inauthentic.  I felt like a fraud on a daily basis and felt so ashamed for keeping up that charade for as long as I did.  Anyway, now I'm having panic attacks because I want to follow my dreams and do things that are meaningful and that can help people.  I want to feel good about what I do.  On the flip side I also want to be able to pay my mortgage and not have people be disappointed in me.  So to use my husband's Blackjack analogy, should I take a risk and take an extra card, or stay with the hand I've got and not lose all of my money?  It's a very frightening, stressful place to be.  I'm 35 and that's still young, but it's not far from being 50 in a way.  I don't want to make a mistake and regret the way I live my life.  I did that for 9 years at the last job.  I don't want to do it for 9 years at another one.

Can someone just discover my silly blog so that I can write for a living the way I've always wanted to?  I know there has got to be a deep demand out there for a fitness blog that covers Michael Bolton, Richard Simmons, and sometimes running right?  Or at least someone could share their lottery winnings with me?  That would be super!

Speaking of, even though I feel stressed and have the sads today, I decided to combat it by being healthy and treating myself with respect.  I started out with a smoothie for breakfast.  I took a picture of my yummy protein powder and the Cara Cara oranges I got from Costco instead of the actual smoothie.  (The protein powder turns the smoothie a very unattractive shade of brown, so y'all are better off without a picture of it.)  I used oranges, a banana and a cup of frozen pineapple with some almond milk and my protein powder.  Good stuff for sure. 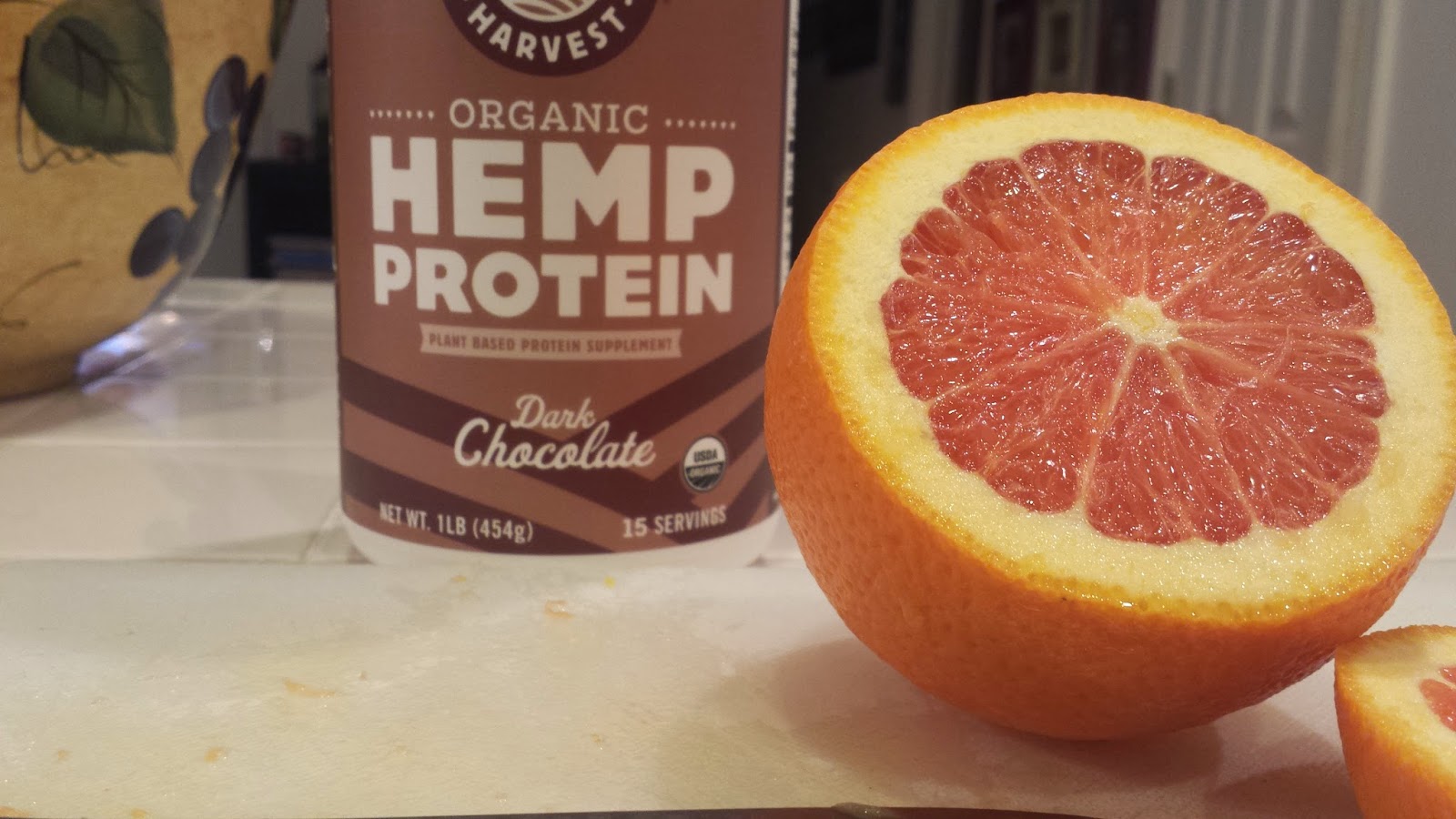 And then I put on my workout clothes, including my Portland Marathon finisher's shirt to remind me that if I did a marathon, I can do anything.  That if I was able to do that, then I must be pretty strong and have some value in life.  That you can't quit when you're at mile 23 of life, even though you really want to. 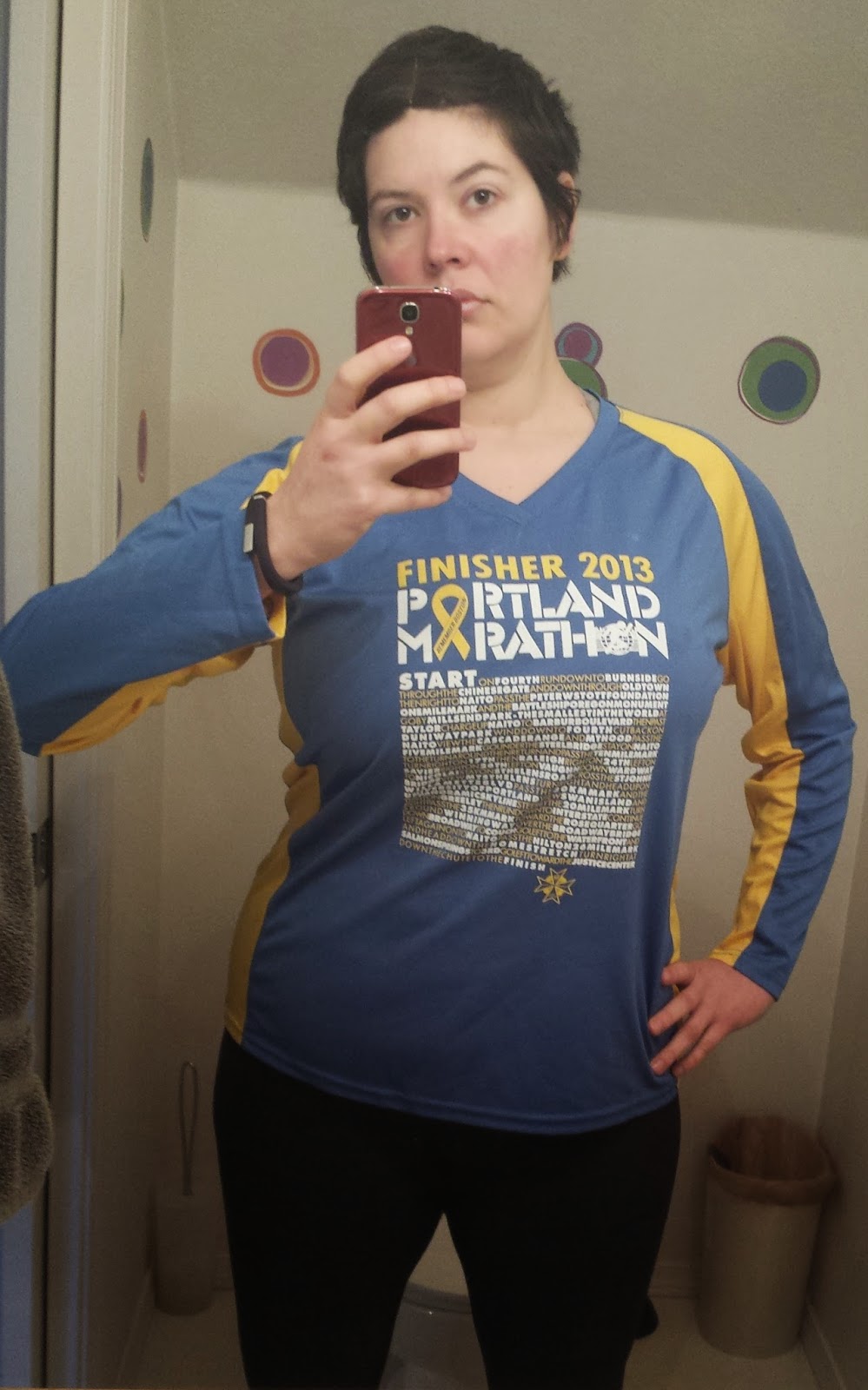 And as I took my picture, I mentally remarked to myself that I couldn't believe that my shirt was loose and that 3 months ago I couldn't even fit into it.  That I've made so much progress in such a short amount of time and that I feel pretty great.  And that if that was possible, maybe other dreams are possible.

Then I packed up Molly, aka Baby Smaug, aka "Molly Stop That" in the car.  I sang along loudly with The Proclaimers "500 Miles" song because I was alone and didn't have to pretend it was dumb.  And then we walked for two miles in the sunshine. 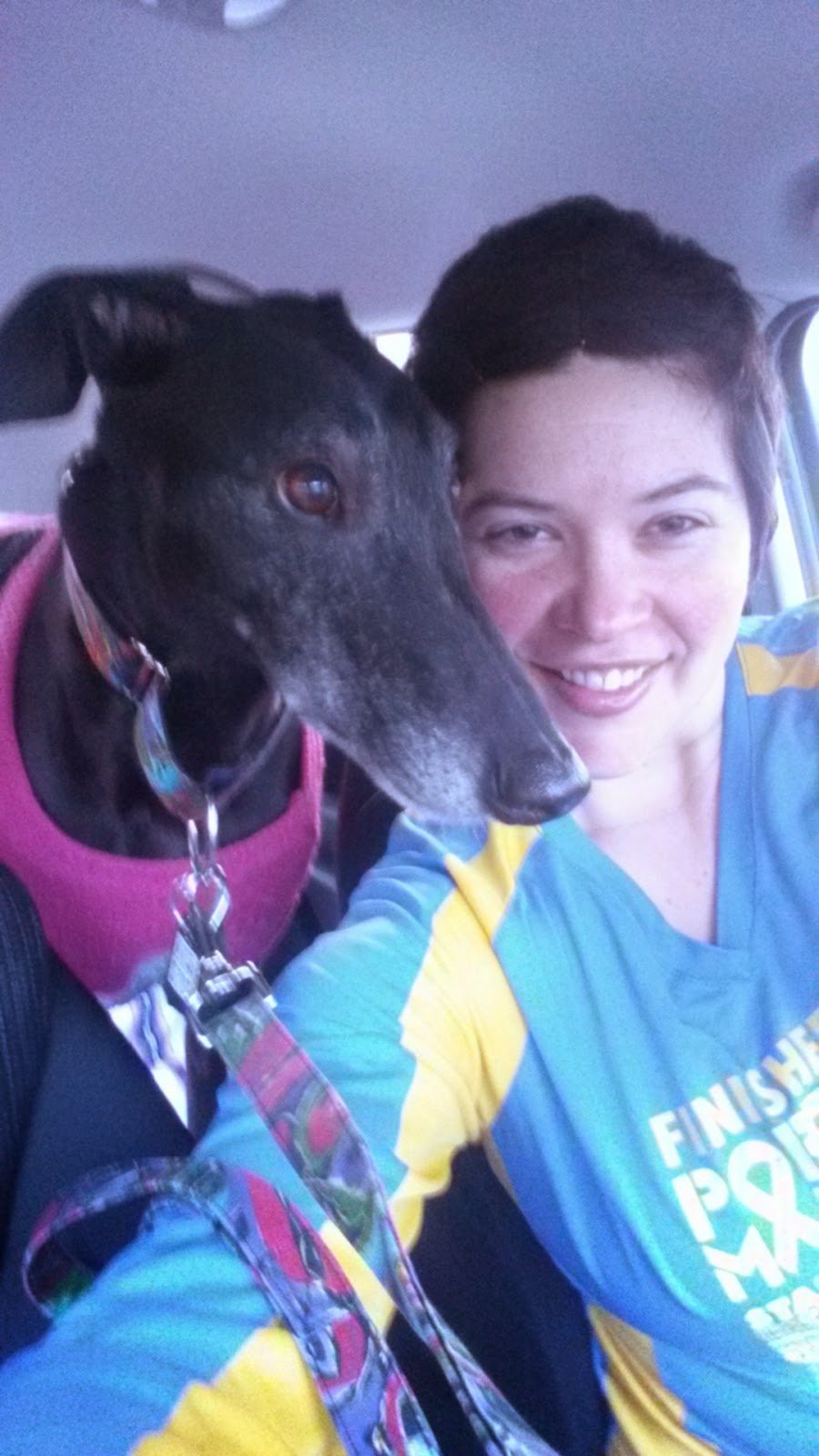 And then when we were done with our walk, I went to the store and bought myself some flowers.... 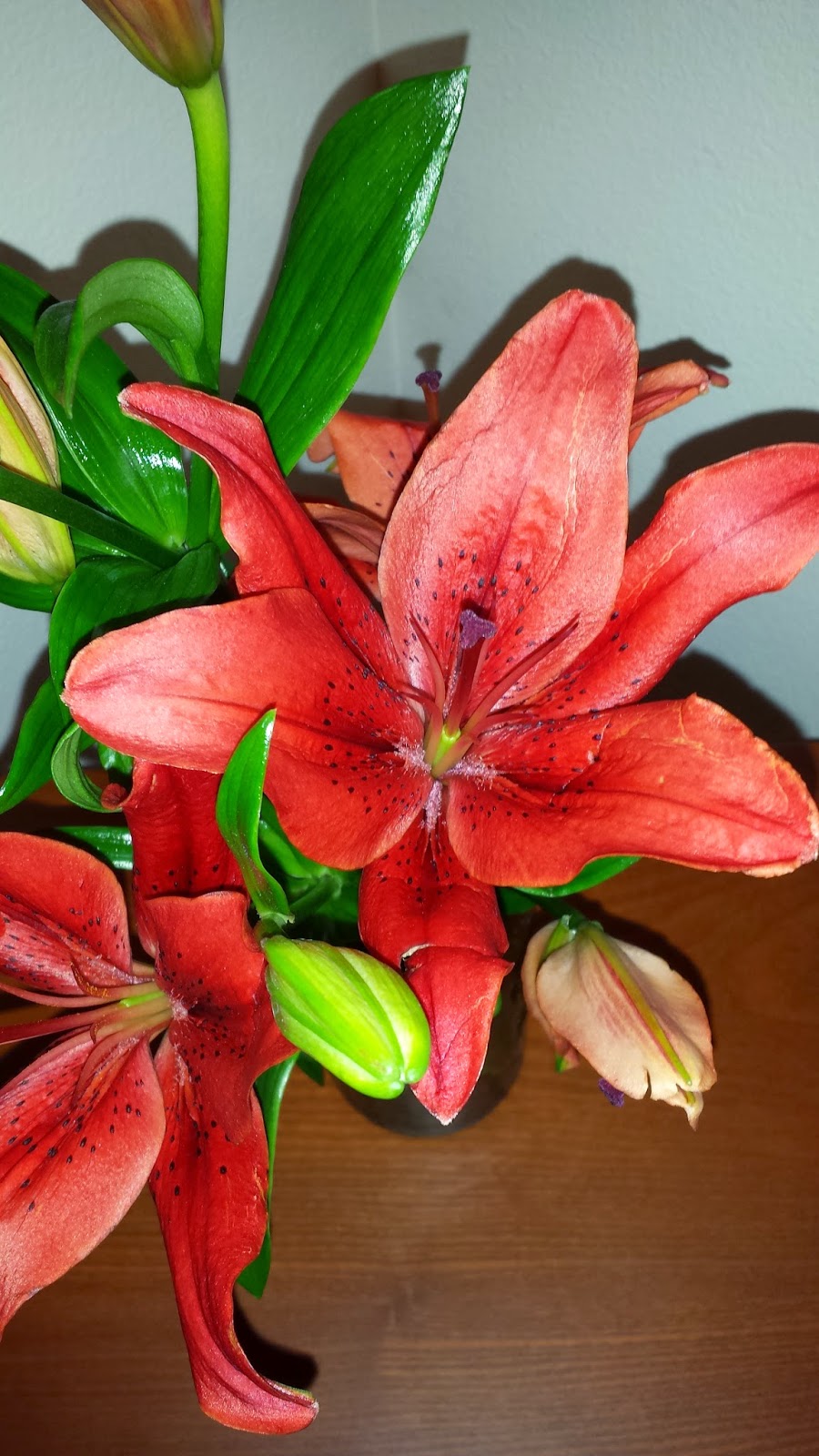 And some pickled okra because it's deliciously salty and clearly the talk of Texas. 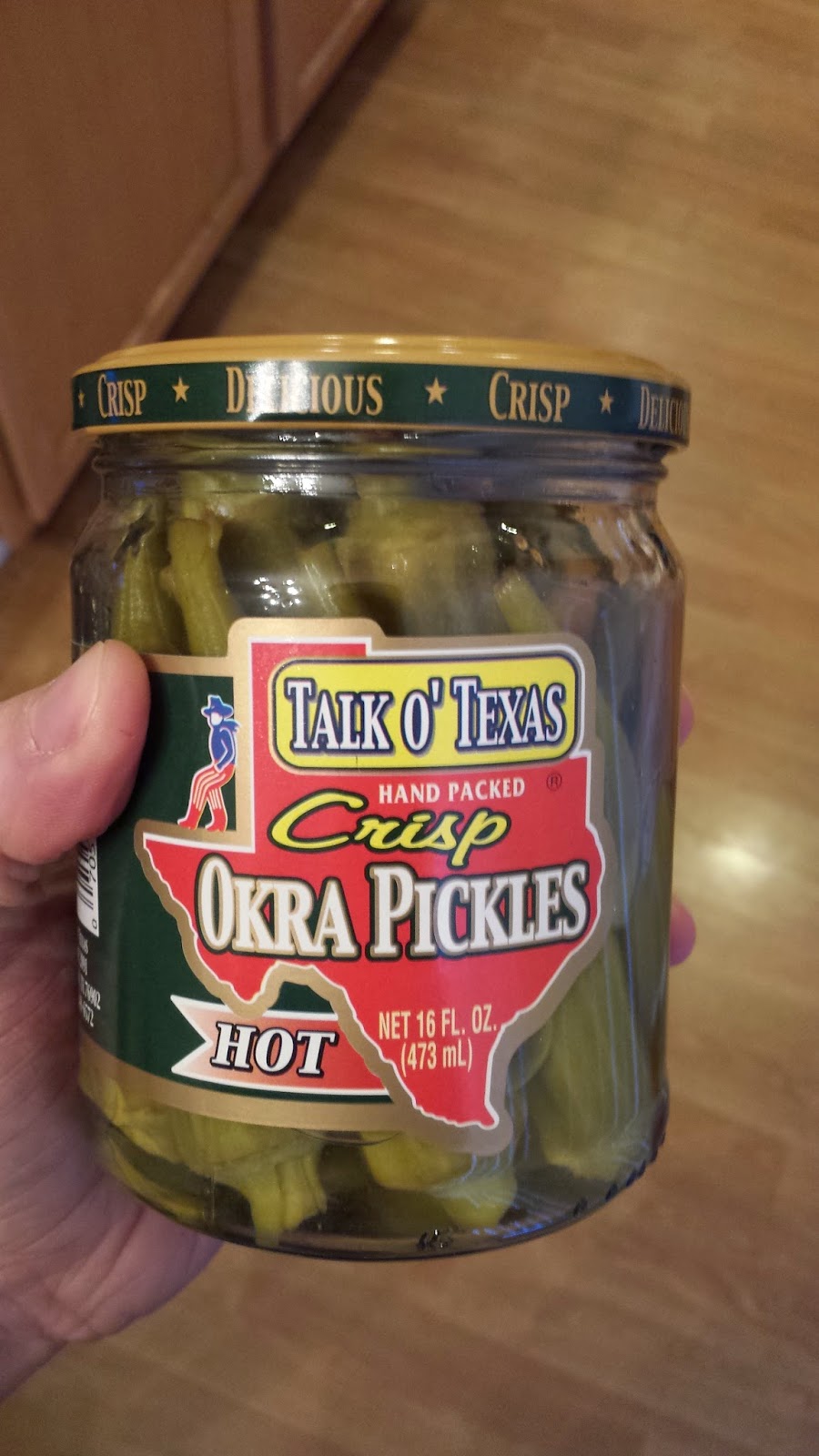 I still feel scared, but I feel better.  I sipped a smoothie instead of burying my face in a cupcake, and walked instead of wallowing.  I cared enough about myself to choose my new habits and new outlook over the fear, resentment and stress in my old life.  I may not do that tomorrow or the day after, but at least I'm doing it today.
Posted by Runs To Get Waisted at 11:22 AM