So I've been yapping a lot lately and my posts have been super text heavy, so I thought we could go on a photographic journey today so that you guys aren't subjected to another lengthy Peter Griffin "You know what really grinds my gears" post.  There's no theme for today, it's just all kind of random.

First and most importantly as a follow up to the Michael Bolton post, I'm glad that you guys were as amused by it as Eric and I are.  Actually it may just be me that's amused, every time Eric finds Michael I usually can hear a huge sigh followed by "Dammit" being muttered.  As I was digging for some photos today I actually found pictures from the concert in question.  This is for the ladies: 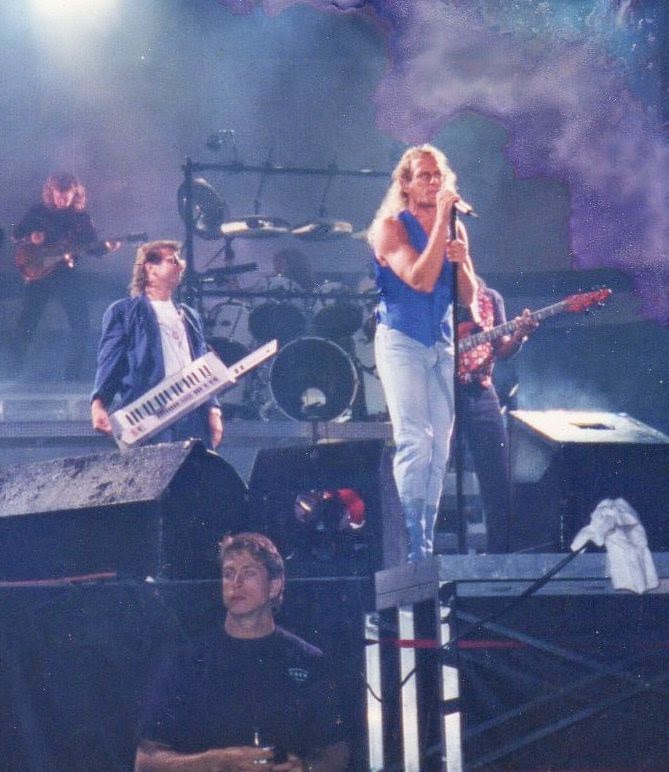 Yep.  Luscious dad jeans, mullet and a vest with no undershirt.  It really doesn't get any better.  And if you're like "Hey Mary, what's that dreamy looking illusion in the top right corner?  Are those delicate wisps of fog rolling in to further illustrate what an ethereal moment that was?"  Nope, that is a the result of a clumsy ass 15 year old girl spilling half a bottle of Sand & Sable perfume on her box of pictures.  I am and have always been very graceful.  Do they still make Sand & Sable perfume, because that was some classy shiz back in the day.

I also found a picture of my adorable little Natasha when she was a puppy.  I can't believe we're coming up on the 2 year anniversary of her passing away next month.  I've never loved a stinky, silly, sweet little dog so much in my life.  My little court jester.  We still talk about her and how much we miss her a minimum of 5 times a day, she was definitely one in a million.  It still really hurts.  I hope that little walnut brain of hers understood how much we absolutely adored her. 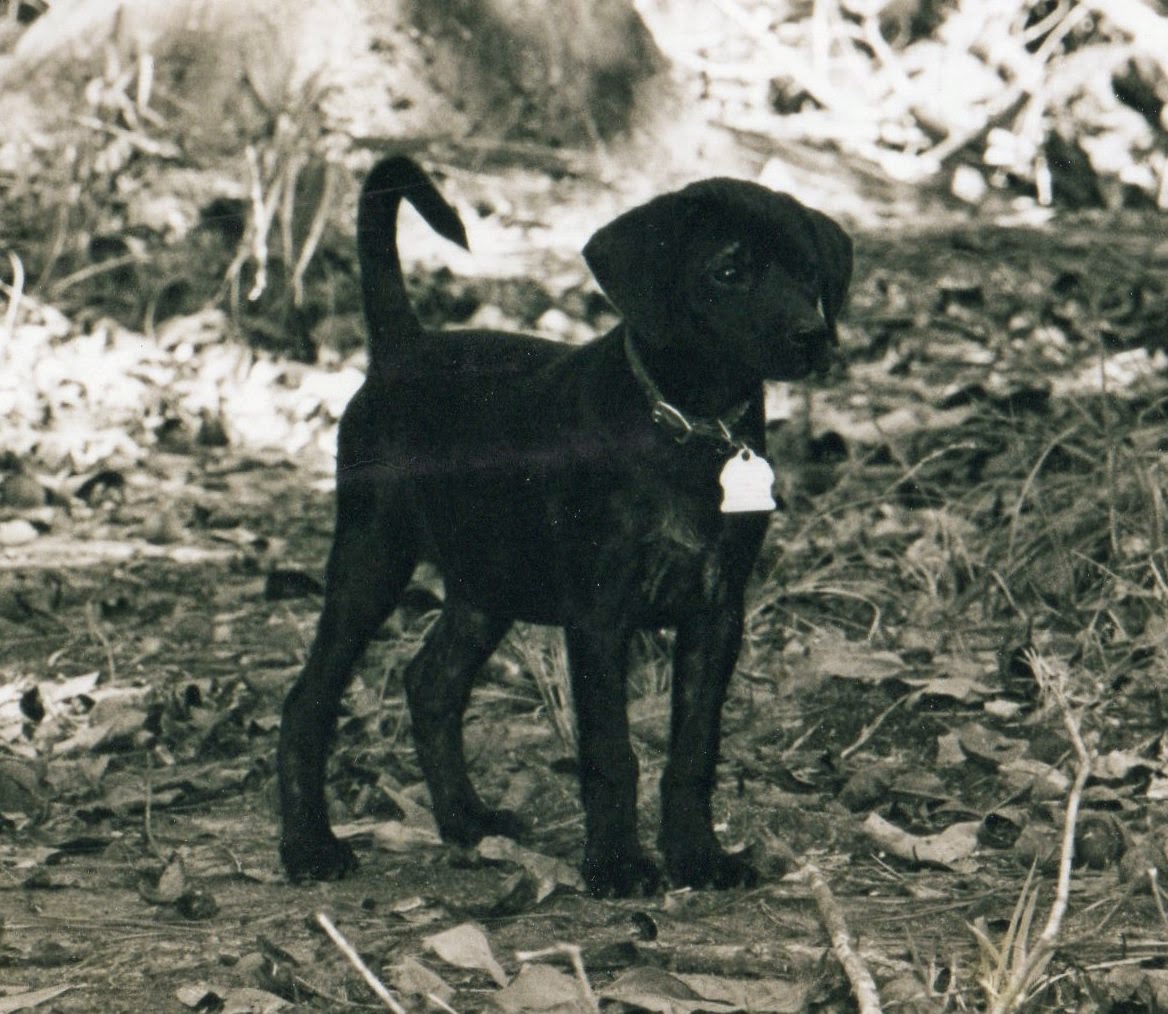 I haven't talked a ton about nutrition lately, but I am still at it pretty well.  We had some high caloric dinners the last couple of nights, but I haven't had issues with snacking during the day and any of that.  I've been trying to mix up breakfast because all I've eaten for 2 months are scrambled eggs in a tortilla because they are fast and tasty.  I tend to behave better when I have a savory breakfast as opposed to sweet, so that's what I'm trying to do in the mornings.  Today I still made eggs, but I soft "boiled" them in my rice cooker, then topped them with a little chimichuri sauce.  I also roasted a purple Japanese yam to have on the side. 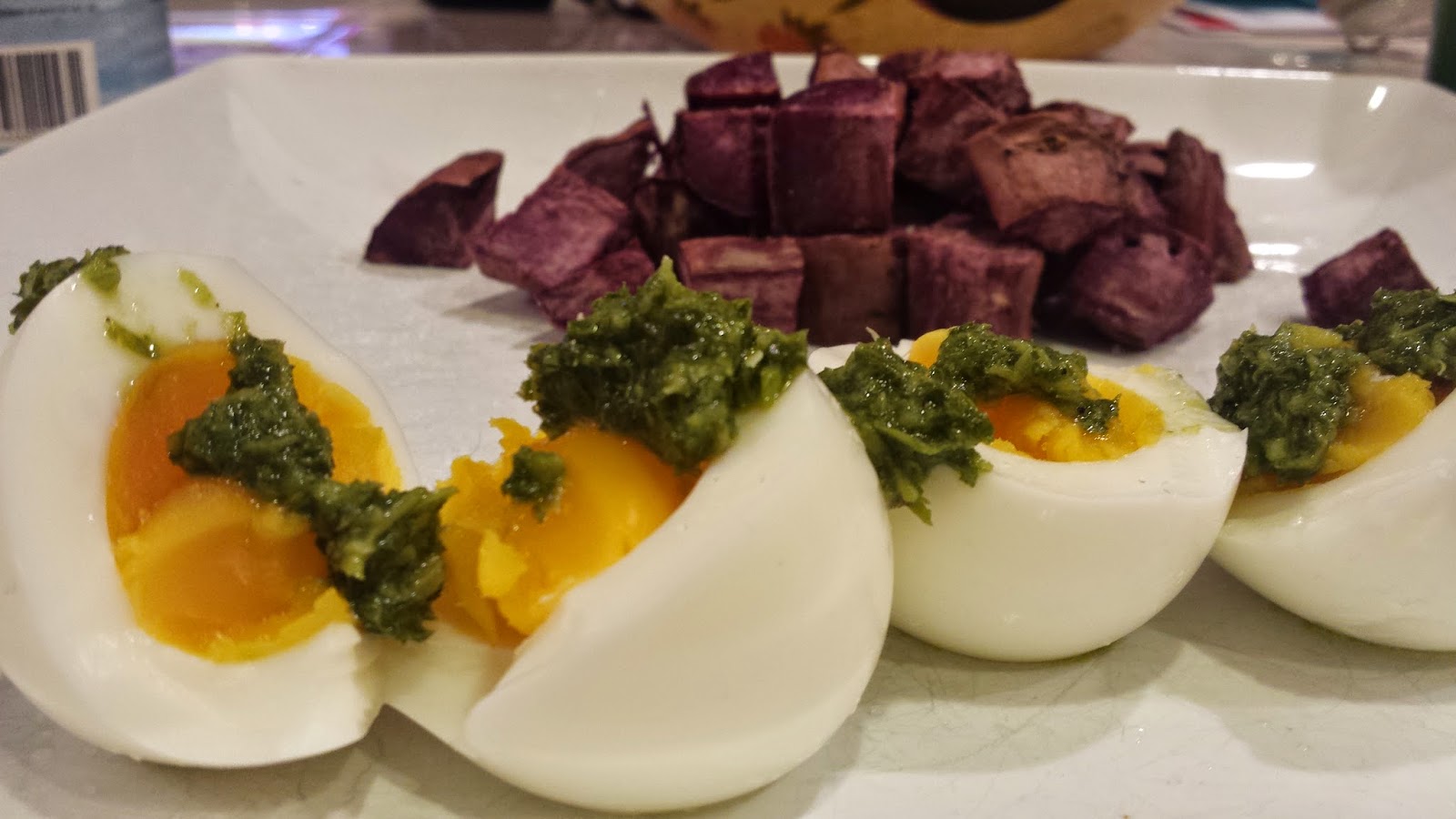 If you don't know what chimichurri is, then you need to get to know it.  It's an Argentinian sauce that's kind of a cousin of pesto, but I think it's tastier than pesto.  The basic ingredients are parsley, vinegar, red pepper flakes, olive oil and garlic.  It's wonderfully fresh, tangy, garlicy and spicy, so it makes a great condiment.  I love it on eggs, but the traditional context for chimichurri is steak.  But you could use it for just about any grilled meat, fish, as a spread for sandwiches/wraps, tossed with roasted vegetables, or drizzled on top of Laughing Cow cheese and crackers.  Once you make it, you'll find all kinds of uses for it.  I made my batch a little over a week ago and keep it in a jar in the fridge.  All the ingredients are very good for you AND it's tasty, so win/win right?

Finally, I've been looking back on old pictures of me.  It's not something I do much, simply because I feel like I used to look like I crawled out of Mordor or something.  Anyways, I found a picture of Eric and I from a few Christmases ago.  I'm not sure what year it was, but I'm guessing it had to be 2008 or 2009.  This is why I miss K&B drugstores (only Des and my aunt will know what I'm talking about), not just because they somehow had the best ice cream ever, but because they would stamp dates on the backs of pictures!  Anyway, I couldn't believe how huge I was.  I compared it to the picture of us this last Christmas, and it was the ultimate "You've come a long way baby." 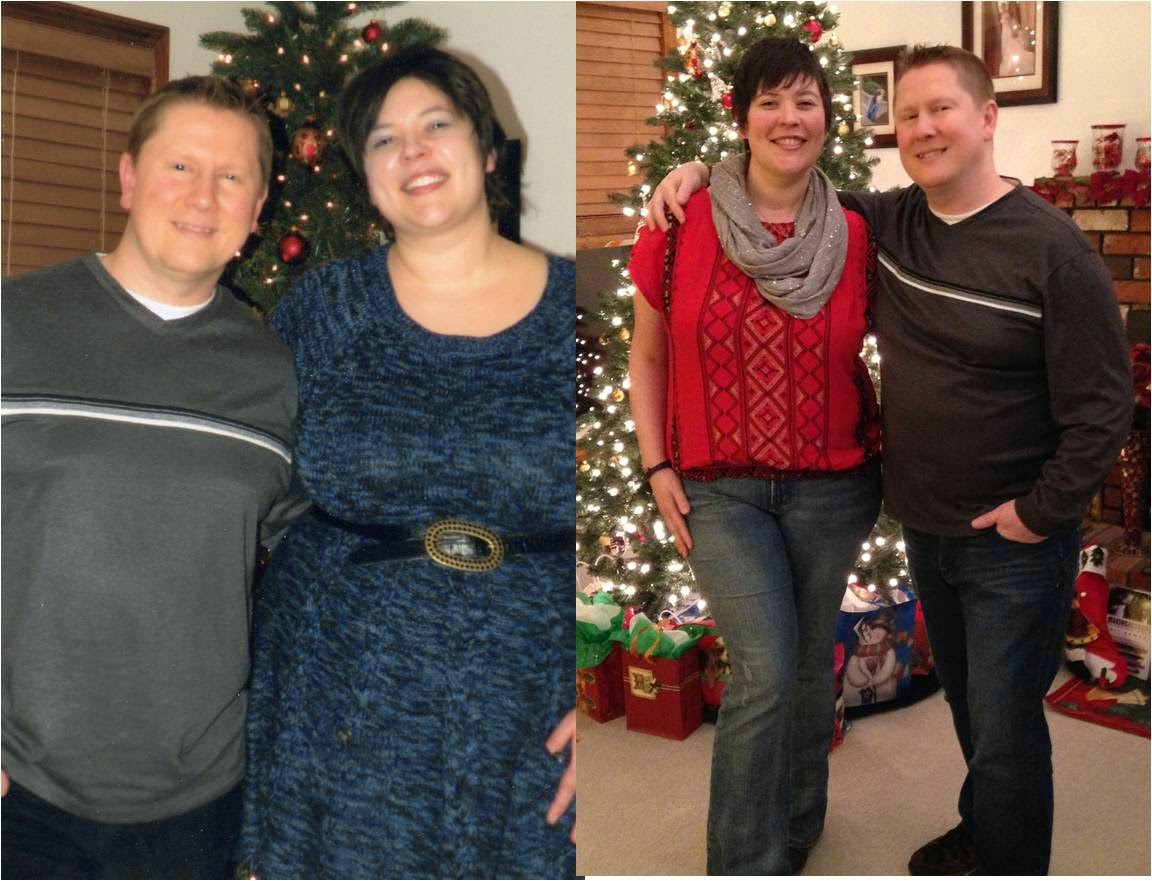 The belt I'm wearing in the left picture?  I still have it, but now I actually use it as you know, a belt and not as a pathetic attempt to look like I have a waist.  I can cinch it about 4 holes in, and was just thinking the other day that I'm going to have to get rid of it because it's too big.

This picture is also pretty triumphant for me.  I got dressed to go to the dentist yesterday and threw on the Nirvana shirt that Eric bought for me last year.  I haven't been able to wear it until just a few months ago because it was way too tight, and showed every roll in the world.  Now?  It's baggy. 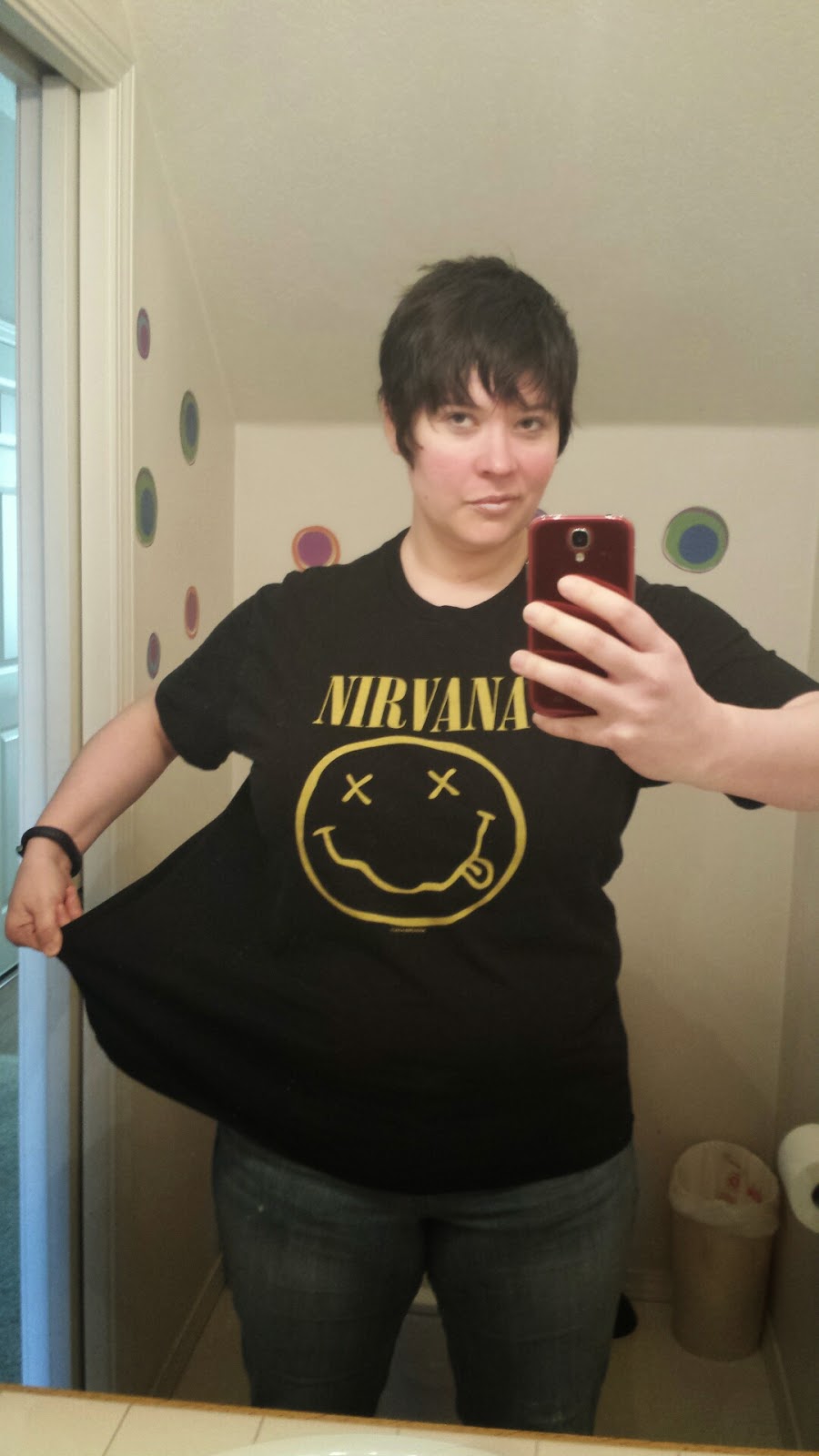 It's always a good but confusing feeling to expect something to fit the same but it's baggy.  It's like your brain can't wrap about the reality.  "Shit, that's loose now?  How did that happen?"

So that made me run upstairs to try on a couple of concert shirts I have that I could barely pull over my head, much less wear.  They do fit now but are both still pretty tight and I would not wear them in public just yet.  They're my new goal shirts! 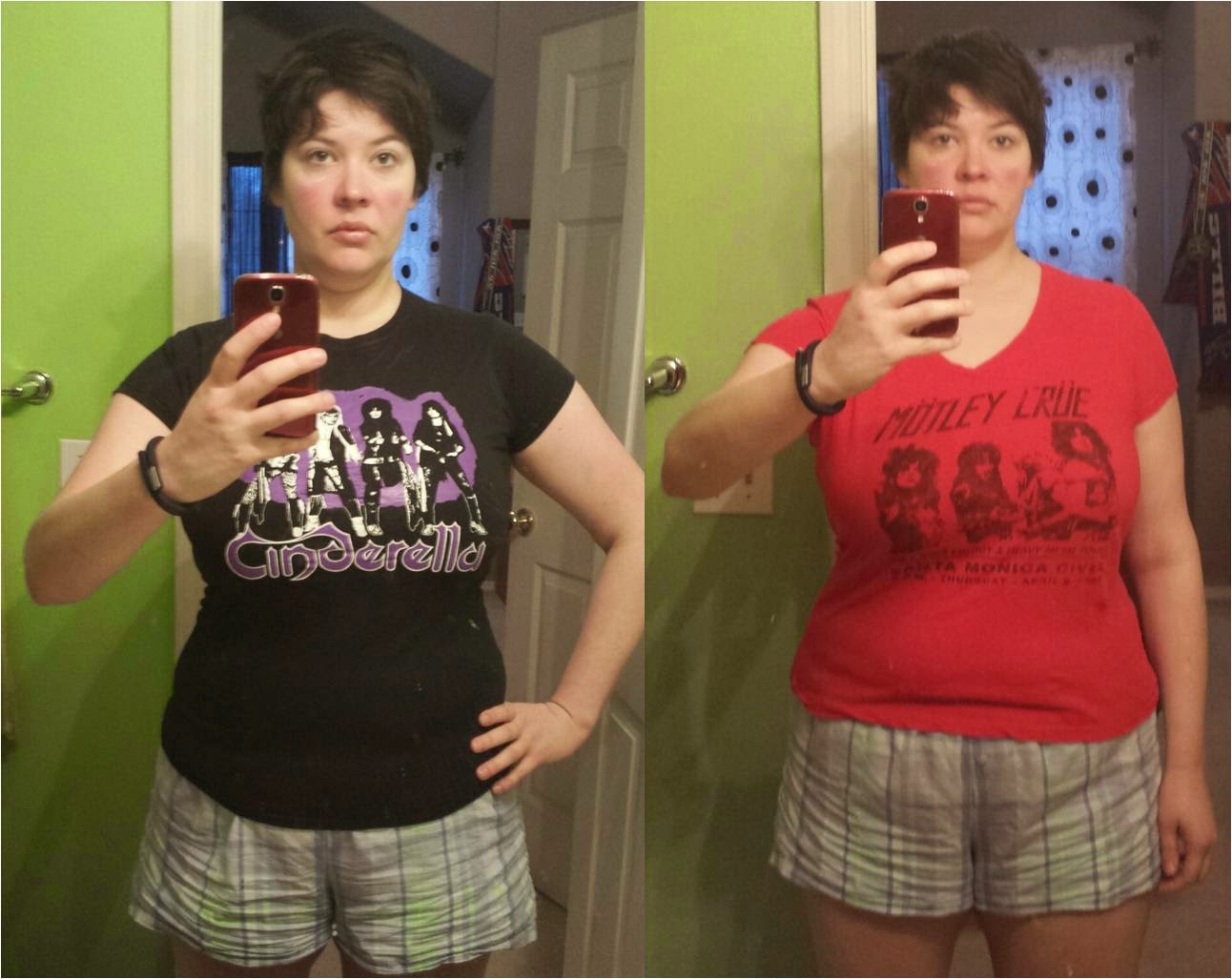 A few things out of the way here.  Yes, I own a Cinderella shirt and no, I am not sorry.  Yes, apparently every shirt I own is a band shirt.  No, I do not have on makeup and yes I have some serious cowlicks and craziness going on with my hair this morning.  I got it cut last week and it's still settling in.  I'm also not sure why I look thinner in one pic when they were taken seconds apart.  Tom Keifer and the rest of the Cinderella members must be holding in the fatness for me.

It's nice to see progress like this.  It's something that is more validating than a number on a scale or even a number on the tape measure.  I'm a touchy feely visual person and really don't have much use for numbers, though it's been nice seeing the numbers go down in both respects.  But the chick in me really loves being able to look at pictures and see a difference, or to throw on a shirt I really like and not feel worried that I look ridiculous.  For those of you just starting your journeys, take TONS of pictures and make sure you take measurements too!  You'll be glad you did!
Posted by Runs To Get Waisted at 10:20 AM