So today I wanted to catalog some of my favorite fitness related things, and since "favorite" starts with an F, and "Friday" starts with an F, we're doing this shiz today.  I had mentioned doing this about a million years back, but then being the scatterbrained Sagittarius I am, I never did it.  Actually I probably forgot that I said I was going to do it because, old age.  But here we are so, let's get to it.  And disclaimer, none of these companies or people asked me to write about them and no one's paying me to do it.  Just doing it because it's how I feel and because I want to. 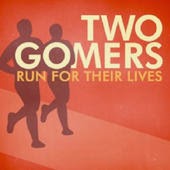 So everyone starts somewhere.  In 2009 when I was super sad over how fat I'd become, and realized I needed to do something about it, the "something" I decided to do was start running.  But I knew absolutely nothing about running and was scared out of my mind.  Online searches for information just bring up sites with advice from "serious" runners (the ones I like to call the tiny shorts runners) who talk about fartleks and "insane x holy crap" speed training workouts.  Super intimidating to a clueless chubster.  I started searching for fitness podcasts since I was at my job where I was just sitting 8 hours a day and needed something to listen to, and stumbled upon a podcast called "Two Gomers Run a Half Marathon".  I was like, "what is this nonsense" and started playing the first episode.  After 3 episodes I was hooked.

In a nutshell, these two longtime friends who were not that physically fit decided to run a half marathon together, and to also document their training experience via podcast.  Neither of them knew anything about running, they just kind of figure out things along the way.  The podcast is just what I needed at that time, I needed to feel like there were people who were just figuring out the running thing the way I was figuring it out.  Their podcasts are charming, funny, and honest, plus I felt like I was learning right along with them.  (The first time I almost pooped my pants when running, I was like, "Oh it's just like what happened to Anthony!")  And best of all, they don't make everything so serious and can easily get strung off on Star Wars, Home Alone or Full House for 15 minutes.  It makes their podcast human and approachable, which is much more appealing for a fellow geek like me.  The Gomers are still recording these days and have since done several races AND a triathlon since that first season!  I fully credit them as one of the inspirations that kept me running and eventually got me to do my marathon.  For anyone who wonders what the hell those "Team Gomer" shirts I wear are about, this is what it's about.  :)

The Gomers have been a bit of a model for me for both running and the writing style of my blog, though I just really had that epiphany a few days ago.  They keep things real, good or bad.  They don't take everything so seriously.  They talk about their lives other than fitness.  And they dive into goals even if it scares the crap out of them.  Check them out at www.twogomers.com and start at Season 1.

I used to be a huge soda hound but once I started trying to live healthier I quit drinking them.  I may have a real sugar cola once in a blue as a treat, but that's about it.  Also, fun fact: once I quit drinking diet sodas, I stopped having the debilitating headaches that I used to have 2-3 times a week.  After doing some research, I fully believe that the aspartame in diet stuff was triggering migraines for me.  Pretty scary isn't it?

I rarely drink anything other than water or tea now.  Well, and booze, but even that has trailed off.  Plain water gets boring after awhile so I decided to take up tea drinking to spice things up, and now I'm addicted to loose leaf teas!   I used to love Teavana but when Starbucks bought them out I pretty much dropped them and never looked back.  Starbucks ruins everything it touches and from what I've read of their recent tea reviews online, I was right.  I mean what do you expect from a company that somehow makes any variety of coffee they make taste like burned hair?  However, I have a bit of an Earl Grey Creme addiction and was beginning to get the sads that I didn't have a good replacement.  I tried David's Tea because everyone seemed to be collapsing on fainting couches about them, but I'll be perfectly honest, their tea just tastes like chemicals to me.  The one tea of theirs I liked (Toasted Marshmallow) got discontinued, plus one of my dude friends told me it smelled like a stripper.  Alighty then.

After some digging online I found this company in Massachusetts called The Tea Guys.  Since I like supporting smaller companies if I can, plus their prices were reasonable, PLUS they make Earl Grey Creme I gave them a whirl.  Oh my.  Their teas are pretty exceptional across the board, and they seem to use natural ingredients to flavor their teas instead of chemical additives.  They have this toasted coconut tea that is faint worthy, and during Christmas they had a maple bourbon tea that tasted just like eggnog.  Glorious.  Their Earl Grey Creme is much better than Teavana's, which makes me happy.  I also like that you earn points with every order that you can then convert to money off your next order.  Highly recommend them if you have a loose tea addiction like I do!  You can browse their teas here:  http://www.teaguys.com/

My relationship with MFP has become like the plot of a sappy 80's movie.  All these years I've been chasing after diet fads (aka the hot bad boys who just let you down) in the hopes of slimming down, when the solution was right in front of me.  It was MyFitnessPal all along, aka the charming best guy friend who has been in love with me since 5th grade, and is just waiting and hoping that one day I'll realize he's my true love.  Actually, did I just describe the plot to "13 Going on 30"?  I think I did.

Since the keys to lasting weight loss and life change are diet + exercise, it stands to reason that you will be more successful if you can see the amount of calories you're eating/burning so that you can adjust portion sizes, adjust workouts and play with the numbers until you find what works for you.  Truly it's not difficult, though I tried my utter best to make it super difficult for years.  I've had MFP and tried to use it on and off for years, and would just blame it for my failures, when all along it was just my fault.  Once I started using the tool properly and logging for more than 5 days a time, I've reached success like I've never had before.  I am on day 103 of tracking, and I can't live without MFP.

It's free and their database is the most comprehensive of any tool I've ever seen.  I make so many better choices now that I use MFP as intended, and as a result the weight is dropping off steadily.  If you're at the beginning of your journey, I highly recommend using it to get a sense of what your intake is a day.  You will be shocked at the calories in some of your favorite things, and then your thinking becomes "no wonder I've gained weight" instead of "how could I possibly!"  If you track honestly and completely, you will see results.  And their app is pretty good and also includes a bar code scanner, so there's really no excuse to not track!  You can get signed up for MFP here:    https://www.myfitnesspal.com/

So, I am cheap in random ways, but one of those way is with workout videos.  I just know myself and know how many DVDs I have sitting and collecting dust.  The workouts would come in, I'd do them for a week, then realized I hated them.  One of the most important things about creating a healthy lifestyle is to do an activity you enjoy and doesn't feel like torture.  I've really come to rely on Youtube as a place where I can go check out different types of workouts for free in the comfort of my own home.  I've found Zumba, yoga, ballet barre stretches, meditation sequences, calisthenics and all different types of videos.  That way if I like it I can keep doing it, or I can never pull the video up again.  My wallet stays closed either way and I haven't made a poor investment.  And especially for something like Zumba where you're like "eh, not jazzed about doing that in front of people", you don't have to.  You can just shake your money maker in the privacy of your own home!

It's also great for fitness and cooking advice.  This is utterly stupid, but I could not for the life of me roll a burrito 4 months ago.  But I started watching Youtube videos on how to roll a burrito, and now I can make fast and healthy wraps like no one's business.  I even taught myself to crochet on Youtube!  I'm a very visual person, so it's great for people like me.

I'm going to cut my favorites off there, but hopefully I can remember to do another segment some Friday down the line, because I have tons of things I'd love to share!
Posted by Runs To Get Waisted at 11:15 AM