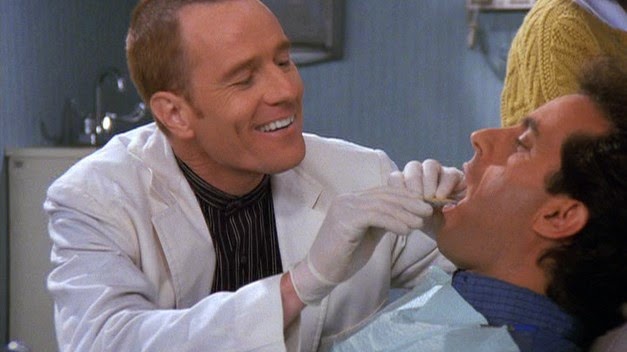 Holy cow kids.  Do NOT neglect your teeth.  When your dentist says "come in every 6 months for a cleaning" you say, "Okay dentist."  Especially if your dentist is Bryan Cranston, which my dentist sadly isn't.  I kind of wish she was because I have a B. Cran shaped hole in my heart since Breaking Bad ended, and no one else can fill the void.

Anyway I am a very lucky girl because despite not going to the dentist since 2009 I didn't have any cavities.  If there was one thing I got on the hereditary front, it's good teeth thankfully.  What I did have was tarter buildup that was being such an asshole to my gums that a normal cleaning ain't going to cut it, I had to have a "you're getting 4 shots in your mouth, intense, multiple visit" kind of cleaning.  My face was numb most of the afternoon and I thought I was going to choke to death on a peanut butter sandwich because I couldn't feel my tongue.  Getting feeling back in my mouth sucked more than the numbness.  I couldn't chew on the left side of my mouth (the side she cleaned) due to the pain, and I had to dig in our medicine cabinet for some pain meds that were older than Methuselah just to help a girl out.  I have to go back next week for her to finish the other half.  THEN I have to go back for a follow up where they will check to make sure my gums are healing, and then they will polish my teeth.  I know right, 3 damn visits.  But that's my own fault for not going for so long.  I guess I'll be making it rain in deductibles this month.

So I have a clothes issue that really isn't an issue, I guess more of a realization I'm dealing with.  When you set out to lose weight, I feel like everyone has that one item in their closet where you say "if I could fit into that again I'd be thrilled."  For me it was a couple pairs of jeans I've owned roughly for forever, especially this one pair that I have idolized for years despite the fact that it has weird riveting on the back pockets that kind of makes a farting noise when you shift around in a chair.  But they make me look like I have a butt and they are the perfect length.  I've been able to fit into the two pairs of jeans that were my "I'd be thrilled" items for about a month now.  But now...they're too big.  I walked to the dentist yesterday because the office is by my house, and when I went to run across the street, my jeans immediately almost slid down my butt.  Besides the trauma of almost being nude on a major highway, I was a bit shocked that the jeans were too big.  It never occurred to me that if I kept going in this journey and was successful that I'd have to find a new smaller "I'd be thrilled" item of clothing.  I never thought beyond those jeans, which makes me sad for "old me" who was just going to settle for some size 16 jeans and never believed she could be smaller than that.  I guess it's time for new goal clothes and a new attitude!

So speaking of that new attitude and having a goal beyond what I think I can do....

As you know, I was waffling yesterday about entering the lottery for the NYC Marathon.  After sitting down and thinking about it last night I decided that I wasn't going to enter the lottery mainly because of the cost.  I had to think in terms of "if I get picked", which meant an over $200 entry fee, a second flight for 2 people to the East coast this year (we're already going back in April to see my in laws) and a hotel in NYC for however many days.  It's just not a cost that I need to go out and purposely try to bring on myself at this point.  So I was like, maybe I could quit being a baby and do the Portland Marathon again.  I was perusing the site and scrunching my face slightly because I just feel like I've done Portland, and I really just want a new experience.  I saw mention of the Seattle Marathon on the Portland site and clicked over with mild interest.  The more I started reading about the course (which is a hell of a lot more scenic than Portland's), the more I was like "I could get down with this."

I cannot f'ing believe I am doing this again.  I swore I wouldn't, but I am.  I guess this time I'm driven by a desire to do a marathon right.  Make no mistake, I'm proud for doing the Portland Marathon and I made it through somehow without injury, but I didn't do things right.  I barely trained, I was overweight and made no attempt to eat properly during the process.  I finished, but it took me 7 hours.  Ever since I've been plagued with wishing I had my new attitude back then.  That I'd been lighter, that I was incorporating better food into my routine, that I was taking care of myself and being more disciplined about exercise.  I've thought a lot of "what if" thoughts.  What if I'd been doing those things, would my finish have been more like 6 hours?  5?  I've got to see if I can do better while I'm still young.

I will still be training in the summer, but not quite as much.  A majority of the long runs are going to be taking place in October and early November when it's not Satan's balls hot, so there is cold comfort there (no pun intended).  My goal right now is to continue to get lighter and just get back into the habit of running.  Training in earnest will be around June, so I have plenty of time to ramp up to being in better shape.  Seattle is a great city (other than their football team and their psychotic fans), so I am pretty excited for the course.  We go past the Space Needle, the EMP and get to run on the floating bridge.  It's going to be a beautiful course!

So, get ready for some bitching and moaning this year folks.  ;)  If you weren't around for the my commentary on my Portland training, ready yourself for some good times.