This morning was weigh in Tuesday, and I did lose a little bit, but only 0.6 pounds.  I know a loss is a loss, but I can't help being disappointed all the same.  I figured the losing 2 pounds a week party was going to have to come to an end sometime, but it still sucks because I just want to get in the 100s so badly!  I played with my calories again this week on MFP and put myself at 1500 calories a day, so I don't know if it was that or just that I've been less active the last 2 weeks.  I am a little bummed because my hips and knees are still smarting a little bit from the RFC 5k.  It's like, "really body, because we've got a full year of this with astronomically long runs to come, so let's get it together shall we?"  A walk yesterday was out of the question, but when I finish up this post I'm going to take a walk with Miss Molly.  Maybe I'll throw in some Richard too if I have time.

I tested another muffin recipe this morning, this time from my Runner's World cookbook.  I get wild hairs every now and again and pick it up to thumb through it, then get excited about it all over again.  Today I made the Hearty Whole Grain Muffin recipe, and sadly I don't have a recipe to link to it.  I would write the recipe down here, but I would rather not get the ever loving crap sued out of me by Runner's World.  Anyway, the muffins turned out great and I liked them a lot better than the banana ones I made on Friday.  The recipe has whole wheat flour, oat flour, oat bran and ground flax seeds in it, which makes them taste really wholesome.  I also added in chopped pecans, dried blueberries and dried cherries.  Definitely was a huge hit this morning.  They are higher in calories than the banana ones I made, which I'm not sure how that's possible, but they are 153 calories each.  I of course had two because one muffin doesn't cut it for me.  Whoops, guess I'd better definitely walk today! 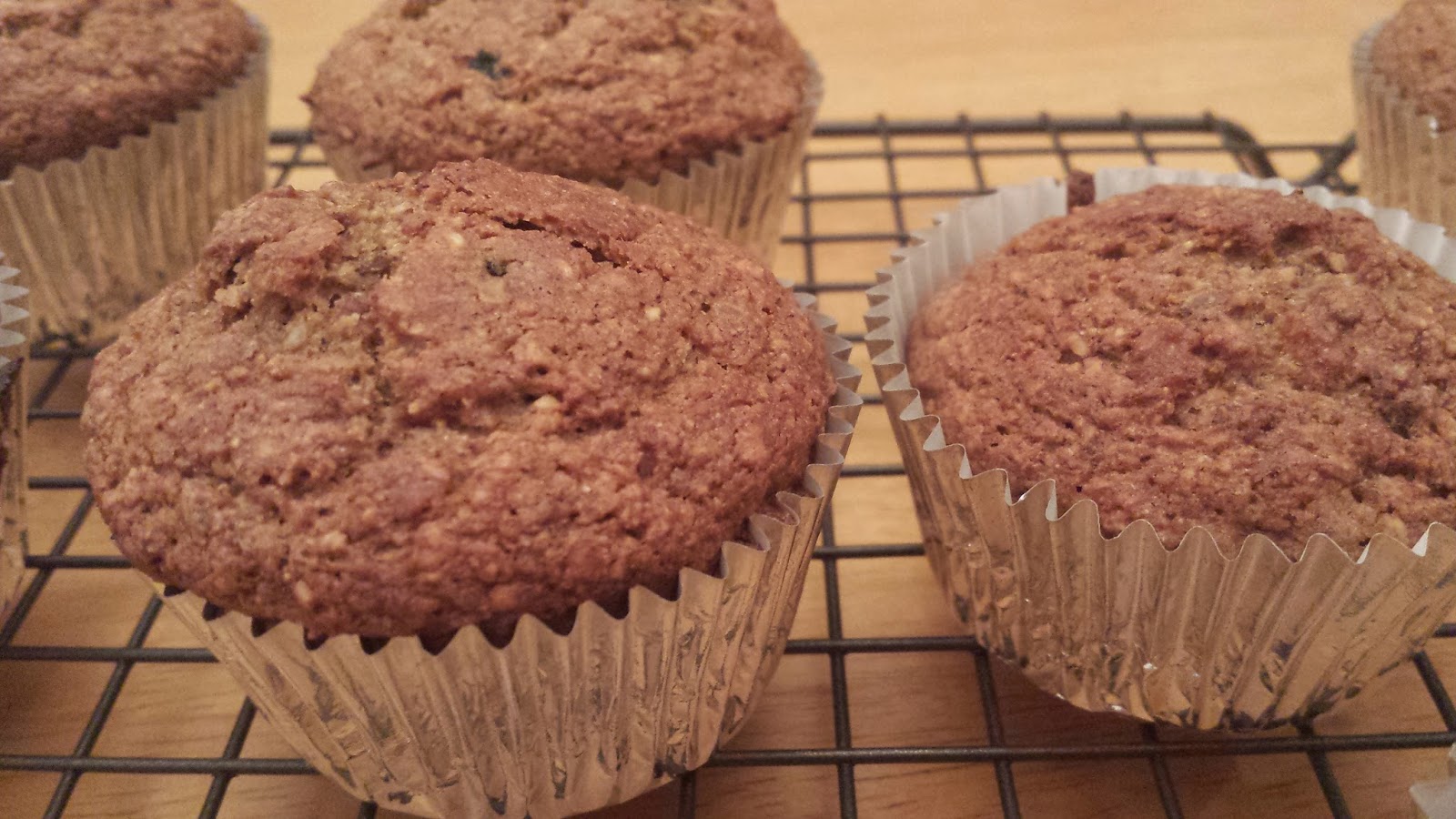 In random crap I notice news, obviously this blizzard stuff is huge in the news but I have to ask...did anyone else notice the sign language interpreter dude for Bill De Blasio?  He is the gentleman with the hot hair game who also seems to be hanging ten:

This dude was mesmerizing and hilarious, and it's like he's giving the sign language performance of his life.  You've got to check out this video of him:  ASL Guy

So, I wanted to show you guys a little project I'm working on.  I zoned on telling you guys this, but I am actually going to a Mardi Gras ball here in Portland on Valentine's Day!  I ironically have never been to a Mardi Gras ball before, so you've got to love that my first one is up here in Portland and not Louisiana.  Go figure!  I forgot how we found out about this, but at some point last year we discovered that there was a Krewe here in Portland. (for non-Southerners, a krewe is a group who puts together balls and events for the Mardi Gras/Carnival season).  Anyway, they are throwing a ball on the Saturday before Mardi Gras, so we're pretty stoked about it.  The theme is "Voodoo Valentine", so Eric and I are going as a voodoo priest and a voodoo doll respectively.  I'm sure pretty much everyone else will be doing the same, but whatevs.

Eric bought most of the pieces of his costume already and I am going to paint his face.  I decided that I didn't want to order my costume because 1) I wasn't sure of sizing and 2) I wanted to look unique and not slutty.  I have a vision of what I want my costume to look like and to my utter shock it's actually unfolding.  I'm good on visualizing crafty things, but I'm not so good on the execution of said ideas.  I found a babydoll-ish looking dress at Ross for a whopping $9.99, and got some pieces of felt for 49 cents at Joann's to make patches for the dress.  I wanted to make a heart with needles coming out of it, plus random patches to give myself more of a rag doll look.  This meant hand sewing these on with a needle and thread, which I have never done before!  I didn't even know how to thread a needle properly, which if my talented seamstress mother heard that, she would probably disown me.  Anyways, my friend Youtube taught me a few things and I got started yesterday. 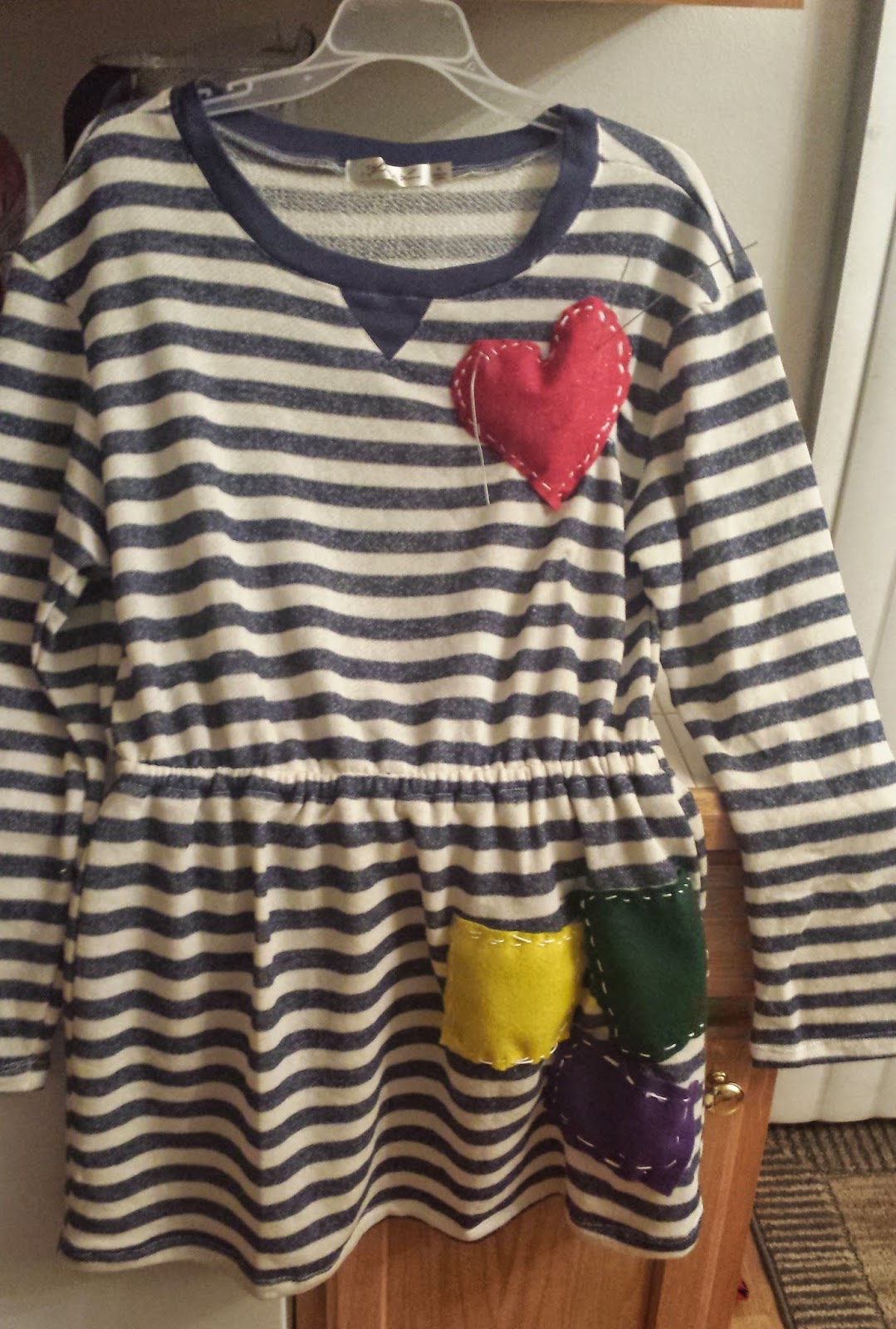 So first of all, thank God that the patches are supposed to look raggedy, because I clearly don't have a career as a seamstress anytime soon.  But despite them looking pretty rough it's actually the vision I had for the dress.  I cut out the felt heart, sewed part of it up, then pushed florist wires through that are going to become voodoo needles, stuffed the heart with cotton balls and sewed the rest of it up.  You can't see the wires in the pic, but I am going to clip them smaller then attach foam balls to the end so that they will look like push pins.  The patches at the bottom are all the Mardi Gras colors.  I've still got more stuff I want to add to the dress so it's not really done, plus I might do another couple of patches filled with cotton so that I can have extra "needles" sticking out of me.  We'll see, the filled patch was a huge pain in the butt to sew as opposed to just the flat patches.

Anyway I am pretty proud of myself for doing the hand sewing even if it looks like a 5 year old did it!  I've got to get a pair of tights to wear with it, and then I'm probably just going to wear my New Balance shoes.  They're not only comfortable, but they are also purple and that's one of the Mardi Gras colors.  I also have this crazy wig I'm wearing that's purple, gold and green.  I have an idea of how I want to do my makeup, but it's not going to be as intense as what we're going to have to do with Eric's makeup.  I of course will post plenty of pictures when this all goes down.
Posted by Runs To Get Waisted at 8:11 AM