Weigh in Tuesday strikes again!  I had another loss, but only of 0.8.  I forgot to mention this earlier this week, but I bumped my calories up on MFP from 1400 a day to 1600 a day just to see what would happen.  During the week prior I was eating 200 calories or more over my limit every single day because I felt so hungry.  Since I wasn't exercising as much, I decided to bump my calories up just a little since I was used to earning extra calories with workouts, and now I'm hungry a lot.  Plus for some reason, I'm less hungry when I'm working out.  I'm not really stoked about only losing 0.8 and I think it's because of the calorie bump up.  I was really hoping to be near the 100s mark by the end of January, but I'm thinking it's going to be more like mid-February.  Now that I'm able to work out again, I may bump back down to 1400.  I am guessing maintenance for me is going to run 1600 to 1800 calories netted a day.  Math:  It's what's people are doing.

Speaking of MFP, I am on a 100 day logging streak as of today.  I'm pretty proud of that, I really don't know that I have ever logged food for that long.  I think it's really kept me on the straight and narrow this go around, it's really hard to be in denial when you see the numbers in front of you.  I don't always make the better choice, but at least I know what I'm getting myself into.  Most of the time I do make a better choice, which at least leaves more room for naughty choices.

On the "so many feelings" front....I have to admit, and I know this is super vain, but it's kind of disappointing that I am almost at the 20 pounds lost mark and no one has really said anything to me about looking different.  I mean, my aunt and husband do because they are awesome as a default, but there's also that "they have to say that because they love me" complex.  I know it's silly, ultimately I'm doing it for me and I certainly see a difference and feel better.  And I know I do look different, I can see it.  It's just nice to get an atta boy once in awhile I guess, vain as that is.  Ah well.

I'm also feeling a bit run down this morning, I've been having trouble sleeping lately, which kind of amuses me since I could sleep like Rip Van Winkle in my 20s.  Not so much any more, which throw that into the "getting older sucks" category along with the crow's feet and not being able to recover from drinking as quickly.  Most of it is anxiety, I've been feeling a lot of that lately and it's been keeping me awake.  I felt extremely anxious when I woke up today, so I'm hoping that will pass.

Just to leave the post off on a humorous note, I wanted to fill you in on a weird marital inside joke between Eric and I.  When I was going through a "what am I doing with my life" glass cage of emotion fit last January, I decided to declutter the house in order to start simplifying my life.  I was a bit of an emotional packrat when I was younger, and while I'm not really anymore, I've never attempted to clear out the crap that is cluttering up our closets from years ago. and all that kind of thing.  Anyway, in my travels I found this souvenir ticket from the Michael Bolton concert  I won tickets to in 1994.  By the way, this is the ONLY thing I've ever won in my life.  I don't know if that's amazing or sad.  The ticket's truly pretty glorious, the picture on the front is quality, Michael being very smoldering and sexy.  The back is a full length picture of him and he totally has on dad jeans.  I love a hot ass pair of 1990's dad jeans that are too short with the belt cinched.  Eric and I had a good laugh about it, and then about a week later I got the brilliant idea to hide it in a dresser drawer on top of his clothes as a joke.  That small act has sparked a marital war between us that has gone on for a year.

You never know where Michael is going to turn up.  He may be hiding in a book you're reading.  He may be chilling out on top of the toilet tank, or waiting for you in a random drawer.  Michael tried to stowaway in Eric's suitcase when we went to Los Angeles last summer, but I got busted at the last second so Michael didn't get to make it to the City of Angels.  After spending time under Eric's shaver, Michael decided to hop up last night on top of our washing machine and hang out until I found him. 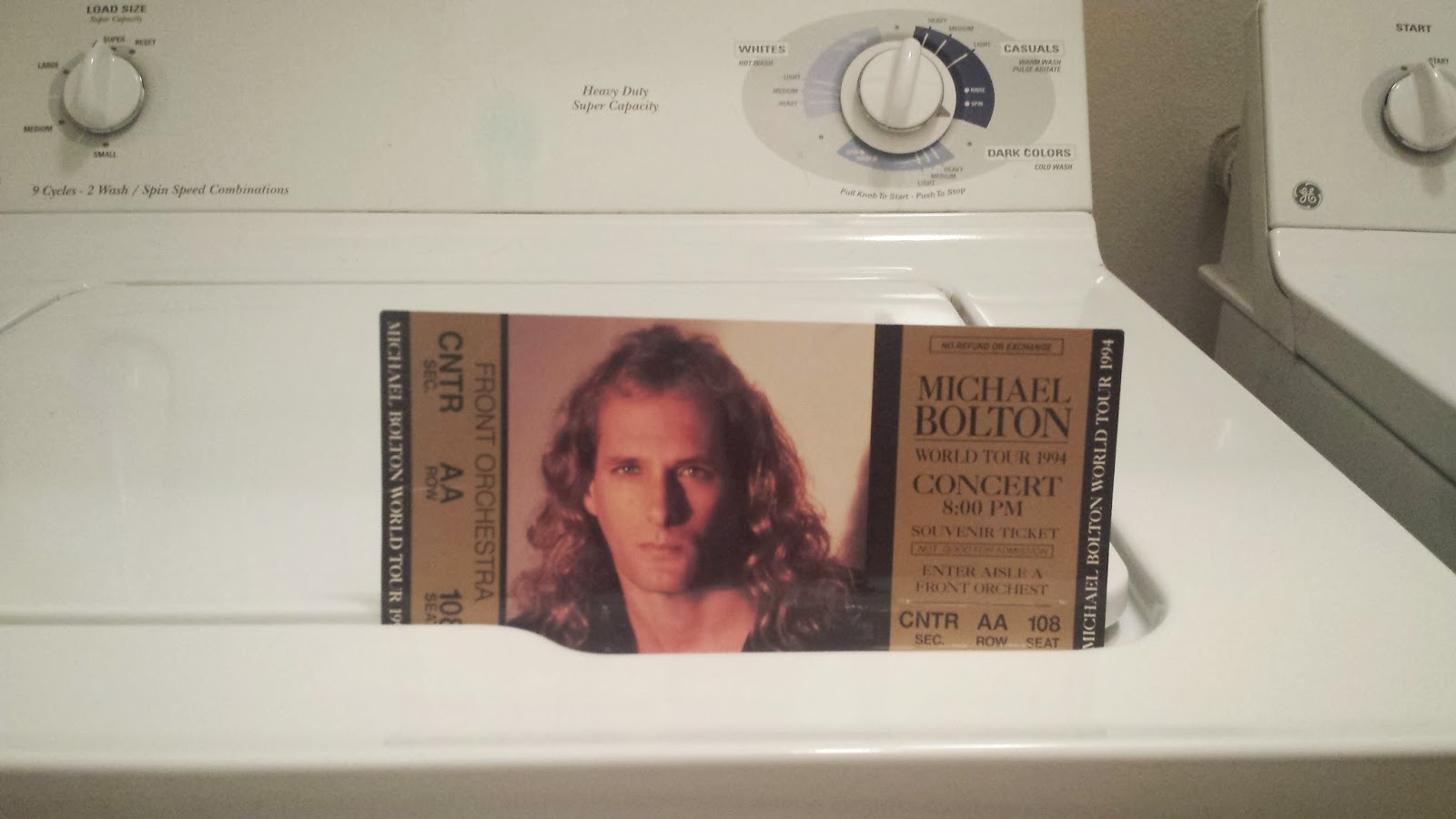 It's like our weird, demented version of Elf of the Shelf,  but only slightly less creepy.  Marriage, it's magical people.
Posted by Runs To Get Waisted at 1:10 PM