Well, our behavior at the Ale Fest yesterday ended up being a solid B minus, although I still really felt like garbage at the end of the evening.  I suppose the bonus is that I didn't feel like garbage this morning, which is a definite improvement over other years!  My issue honestly wasn't the beer, it was food!

I was very proud of myself, I not only stuck to tasting only the beers on my planned list, but I dumped a taste that didn't blow me away, AND I didn't taste my 10th beer on the list because I recognized that I'd simply had enough.  How I managed to have a moment of clarity when I was full of alcohol holiday spirit is beyond me, but as I was sipping my 8th taster I was like you know, I'm over it.  I gave my last 2 beer tickets to Eric and was done.  Never have I dumped a taste just for being mediocre, I usually only dump if they're super nasty.  And never have I not used all my tickets, in fact I usually buy more!  There have been years we easily tasted 15 to 20 beers.  We also didn't buy any full glasses of beer this year, another first.  So those are all very positive behavior changes that I can be proud of.

The food thing started out good.  Eric and I split a wedge of a muffaletta sandwich from this place called Bunk Sandwiches.  I was pretty skeptical that they would make a decent muffaletta being that it's a Louisiana thing, but it was almost spot on.  The sandwich literally almost made me homesick it was so good, their olive salad was frighteningly on point.  Then we got a bag of roasted cinnamon almonds to split, and even shared some with some strangers around us.  So, 1/8th of a muffaletta and probably a half cup of cinnamon almonds, not the definition of health, but not as bad as past years.  Where we went astray was once we left.  I was feeling pretty fried and ready to get on the train to go home, but Eric was hungry and wanted to go to this French bistro around the corner to eat.  My mistake was that I wasn't hungry, but decided to eat anyway since I thought it would help soak up some of the beer.  Not a good plan.  For some reason they were running brunch (it was almost 4 pm!), and everything on the menu was super heavy.  I was surprised since they usually have salads or just smaller plates you can get, but there was nothing light.  I got the opposite of all that, which was an eggs Benedict.  Such a bad idea, it was so rich and greasy on top of all the rich beer, I was only able to finish half of it.  So, huge mistake #1, eating again.  Mistake #2 was immediately coming home and going to sleep at 5 pm, although my body really wasn't going to give me an option on that.  I woke up at 6:30 pm not knowing who I was, where I was and also kind of wishing someone would shoot me in the face.  I seriously felt so sick that commercials for food made me feel like throwing up.  I drank a ton of water and refused to eat any kind of dinner.  I honestly don't know that I could have kept it down if I'd tried.

As awful as all of that was, I really didn't feel that bad when I woke up today, it's almost like I experienced all the hangover type stuff last night.  I know that doesn't sound very impressive or fun, but in past years the day after the Ale Fest was always a lost day filled with regrets, horrible headaches, dehydration and self loathing lol.  Waking up without feeling all of that was definitely an improvement.

Next year I am going to further improve my Ale Fest game by only drinking half of my tastes unless they are super delicious.  There were really 4 beers out of the 8 that I tasted that were super memorable and worth drinking the whole taste.  The other 4 were good, but I could have dumped the rest of the tastes on those 4 without feeling super bummed about it.  I also realized this year that we need to have a food plan in place if one of us wants to go to a second location, and already have a place picked out that has better options.  I honestly think having that second meal really messed me up, I am just not able to handle several rich meals in a row like that anymore.  All good learning curves for next year!

Today has been spent drinking a ton of water and going Christmas tree shopping!  We picked out a monstrous 7 foot Grand Fir that was comically difficult to wrestle in and out of the car.  Despite it being the size of a linebacker from the Steelers, it is really pretty and smells heavenly!  It's always so much fun to get our special ornaments out and put them up.  We've managed to gather up a collection over the years.  I got a special ornament made last year with a picture of Natasha (her nickname was Tootie) as a surprise for Eric.  It's definitely dear to us and we gave her a place of honor right at the top/middle of the tree. 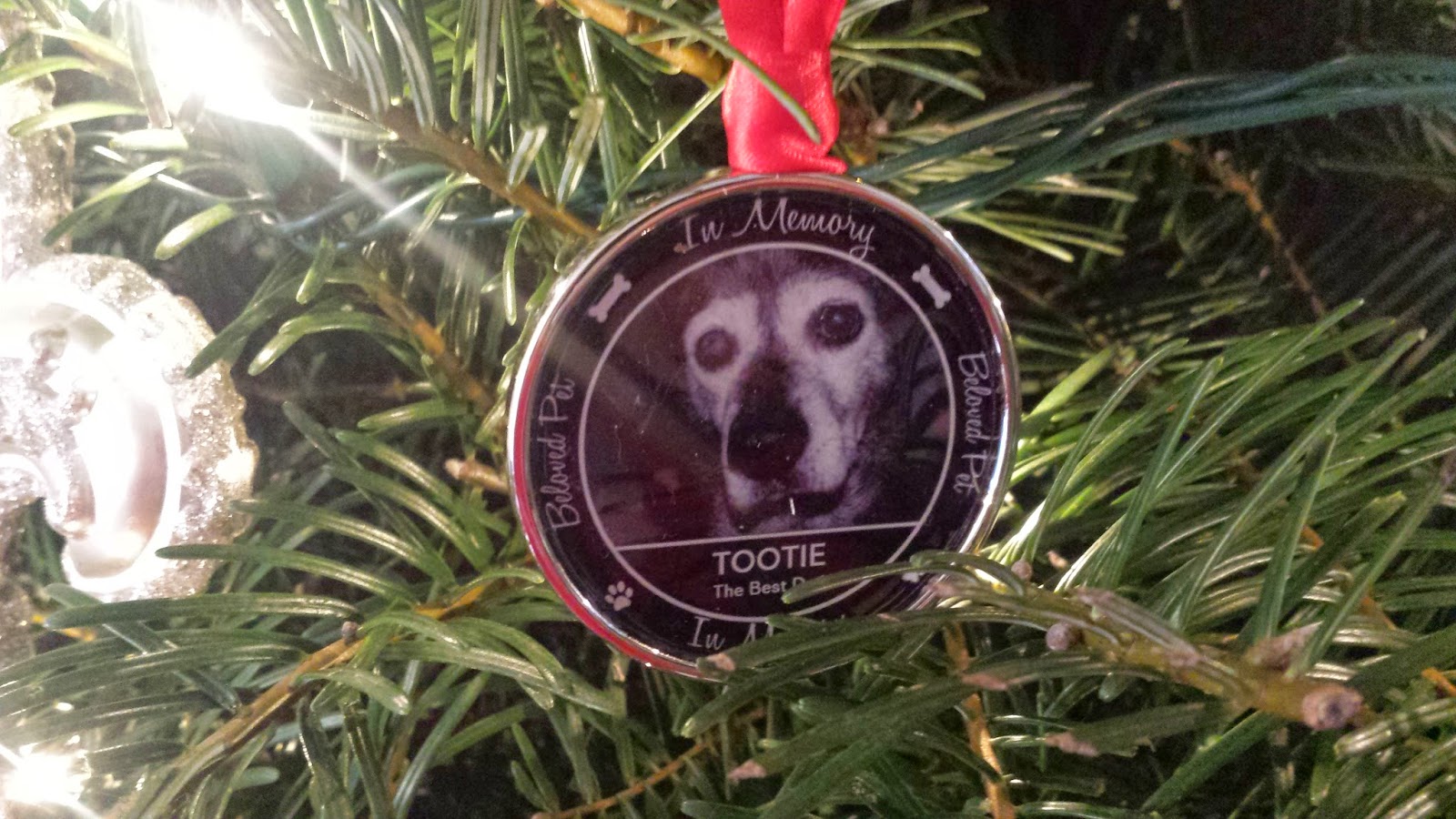 I was definitely happy with the tree once we got it done, although it's so huge that Eric had to switch places with Molly on the couch because he couldn't see the TV from his normal side! 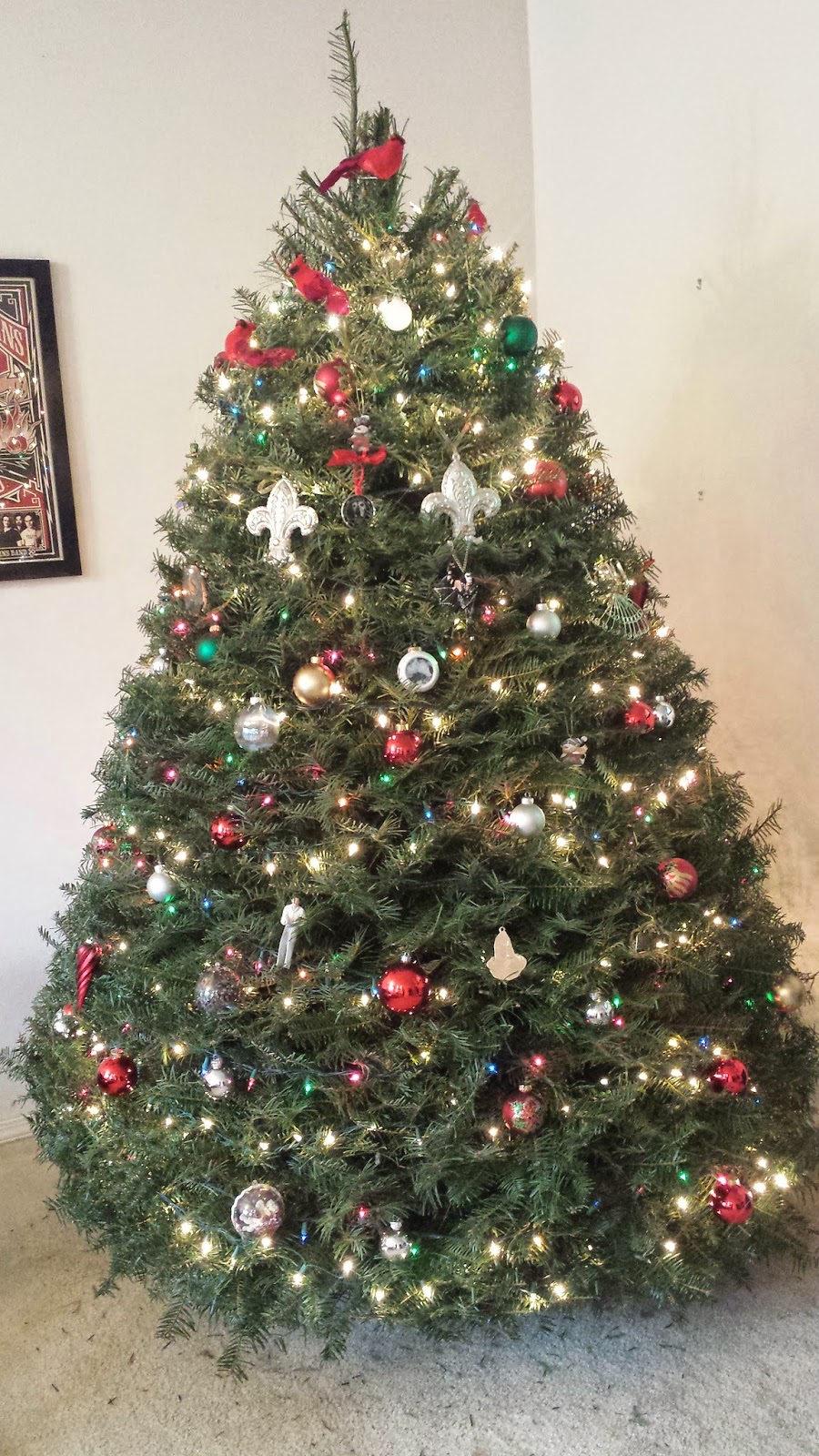 I know my choices for our Christmas Musical Advent series have been pretty wild so far, but for Day 7 I'm going super traditional.  Since this was the last of my Christmas decorating, I thought "It's Beginning To Look A Lot Like Christmas" by Johnny Mathis was appropriate.  :)

Posted by Runs To Get Waisted at 4:48 PM