Hard to believe, but this is the last Tuesday weigh in of 2014, and sadly I didn't end the year on a "loser" note.  I gained back another pound this week, making for a 3.2 gain since my low weight on December 16th.  I guess I'm lucky it's not more with the way we've been eating/drinking, or as I so eloquently put it to my husband last night "it's been a sleigh ride into Hell since my birthday."  I credit the fact that despite everything else, I've kept up with my long walks almost daily.  I am trying to just survive these waning days of December when everyone seems determined to shove alcohol or a dessert into my face.  I really wanted to dry out this week until NYE in anticipation of our really special bottle of champagne, but we went to see our friend's new baby last night, and they poured us a glass of wine pretty much when we walked in the door.  I did limit it to one glass because most pinot noirs and my stomach are not a good combo.  I am actually really over drinking, but won't have a problem rallying for champagne tomorrow night.  ;)

I am so very close to my step goal, but it's pretty exhausting.  I pretty much have to get 13,300 steps today and tomorrow in order to hit it.  I took a long walk (4.5 or 5 miles, I accidentally shut my Garmin off so I am not entirely sure!) in the super bitter cold today and was still only at 11,000ish by the time I was done, so I'll have lots of pacing to do in the house today!

We are having a quiet little New Year's Eve here at the house.  Last year we had a super kick ass time with my brother-in-law and his girlfriend in Los Angeles, but opted for an at home NYE this year.  Those are always nice, just being in your jammies and being able to indulge without worrying.  I don't like being out on nights like that anyway, where you know everyone and his brother is drunk driving.  I'm going to get a Dungeness crab since they are in season now and also make shrimp ceviche, so that will actually be pretty healthy!  I'm also making garlic monkey bread, which will NOT be healthy.  ;)  I'm going to make a traditional New Year's lunch with greens, Hoppin' John and cornbread and my aunt/uncle will join us.  It's pretty cold this week, so I'm pretty excited at the thought of a warm bowl of black eyed peas.

Since I will likely not post anything tomorrow because I'll be mad busy, which means this will be my last 2014 post, I thought I'd do a little "year in review".  2014 was not a prolific year for me for me when it came to races or fitness, it was really more of a year with a ton of strife, major life changes and a lot of soul searching.  2015 is going to be a little more of the same (hopefully minus the strife!) since I will be figuring out career options and seeing where all of that takes me.  I just wanted to look back on 2014 and highlight some things that happened.

1.  I ran the Louisiana Half Marathon in January

At the beginning of the year when I was on sabbatical, I planned to go down to Louisiana for 2 weeks to visit my family.  I thought it might be fun to do a race while I was down there, and ended up choosing this one.  This was a somewhat last minute decision but ended up being one of my favorite races that I've ever done.  The course was super awesome, it was really well organized and the spectators were great.  I can't recommend it enough if you can get down there.  But the biggest surprise of all came 2 days before the race when my big brother surprised me and told me that he had signed up and would be running with me!  It was his first race ever, so I was very proud of him for deciding to run it with me since I don't know that the organized races are his thing.  Of course he actually runs all the time and is very fit, so his chubby baby sister slowed him down, but we had a super awesome time filled with a lot of laughs and good conversation during the race. If you care to read more details, you can read my race recap here.

2.  I ran the Heartbreaker Half in February

I honestly almost forgot that I ran this race, although I shouldn't have because it was memorable on many levels.  It was freaking cold that day, I was plagued by a d-bag fighting couple the entire time, and there were no potties on the course yet I somehow managed to PR.  Sadly Eric was out of town and I didn't have anyone there to see me do it!  I did have a great sushi lunch with my aunt/uncle, plus I decided to be gauche and wear my medal (or as my husband refers to it, "the bling of accomplishment") into a liquor store.  My recap for that race is here.

3.  In April we celebrated one year of Molly joining our family 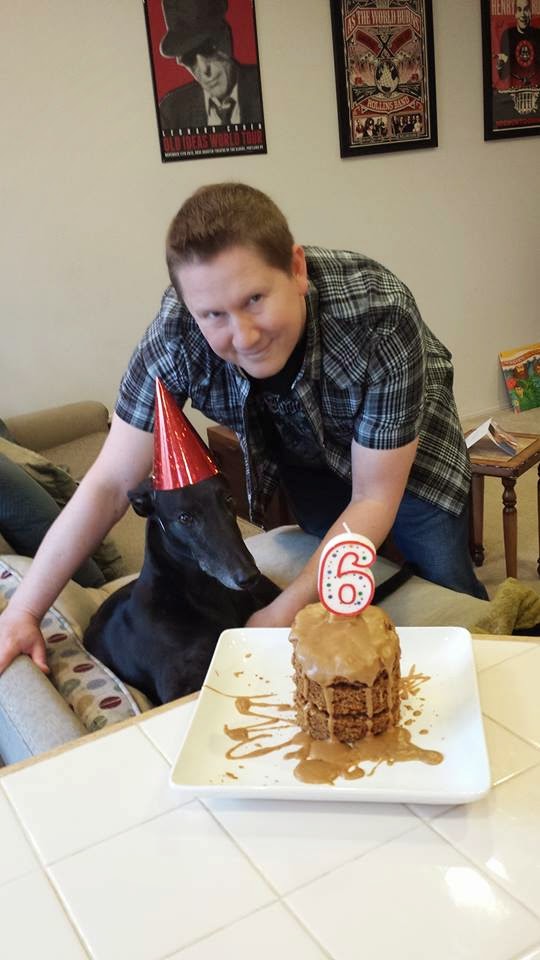 I can't believe we've had this crazy lady for a whole year!  She has actually become a very sweet girl since we adopted her despite being a little standoffish at first.  It's fun to see the changes in her, fun to have our little routines and even more fun to see how happy she is in our home.  And if you were wondering what kind of people throw birthday parties for their dogs, well...us.  We're those people.

4.  There were tons of professional changes this year

The year actually started off with my poor hubby getting laid off by our company, which made me equal parts relieved and furious.  Luckily he found a new job that is the polar opposite of where we were, and he has a great manager and work environment.  It truly is such a blessing and I am so happy that he finally found the work environment that he deserves.  I finally took the plunge and quit in June after finally having my fill of my health and life being compromised for 9 years.  It's been wonderful and scary all at the same time, (I do miss seeing so many of my coworkers) but the much needed break has put me in the healthiest state I've ever been in.  I am incredibly lucky to be in a position where I could take the time to focus on myself, I know a lot of people don't get that luxury.  If you've been reading this blog for awhile, you know how much the job drained me and sucked the life out of me, so I feel like a whole new person both physically and mentally.  It will be time to go back to the career drawing board in 2015, but I'm ready to face that with confidence.

5.  I ran the Halloweenathon 5k in October

This race was interesting because it was the first one I did since the Heartbreaker in February.  I don't know that it was my fave of all time due to the course, but it was good to get back out there, and of course to add another medal to my count.  ;)  Y'all know how much I love my medals.  You can read my race recap here.

6.  I finally got it together

A lot of it is due to the luxury of having a break from normal commitments and pressures, but I really feel like I turned a huge corner in October with my philosophy on health and fitness.  No more fad programs.  No eliminating foods.  No more guilt.  No more little horseshit excuses.  No more doubting my abilities.  No more selling myself short.  Just make things fun, make things doable, and make myself consistent.  That is probably the theme for 2015...consistency.  The end of 2014 has been great, and I know that next year will be even better.  Instead of saying "I HOPE I can get healthier and slimmer next year", I KNOW I can do it, and I can totally envision getting lighter and lighter, and all of the things that I will accomplish during that process.  I know at some point I will be able to slip on a pair of "normal" jeans next year.  I know I will have more muscle tone and be stronger.  There is no hoping or maybe about it.

Anyway that's really been about it for 2014.  I hope you all have a safe and happy New Year.  If you're indulging in grown up drinks make sure you have a sober driver.  Don't make any Taco Bell runs at midnight.  Make sure you have plenty of water and healthy lunch/breakfast options available when you stumble out of bed on January 1.  Most importantly, be ready to kick ass when you put up your 2015 calendar.  Let's make 2015 THE year.  :)
Posted by Runs To Get Waisted at 11:32 AM