We've had such a nice and relaxing weekend!  It's no secret that fall and winter are my favorite times of the year, and besides all the obvious reasons, there are two more.  One is that for some reason, our social calendar seems to lighten up and we have a lot of time to ourselves.  There's not a lot of rushing around and having to squeeze in this, that and the other, so I tend to feel a lot less anxious.  Secondly, this is the time of year when all of the good movies start coming out!  We love the Golden Globes, Indie Spirit Awards and of course the Oscars, so this time of year is when the award worthy movies start coming out.  We started off our weekend on Friday night by going to see St. Vincent with Bill Murray and Melissa McCarthy.  It was really cute, although kind of predictable, but it was a very sweet and enjoyable movie.  Melissa McCarthy was great in it which made me glad for her.  Since Bridesmaids she's really been in some stinkers, but this movie proved the girl has chops.  Sometimes I think these comedic actors do better when there is a slightly serious edge to the story.  My favorite person in it was actually Naomi Watts, she was totally great and funny.

Sadly my crab rangoon roll ups that I made before the movie were NOT award worthy.  It wasn't even a taste so much as a texture thing, the canned crab really felt gross.  It was kind of like hair or something.  Note to self, spring for the fresh crab meat at the seafood counter.  I did have an almond Snickers at the movie and it was delightful.

Saturday was so beautiful!  We went for breakfast at our favorite bakery, La Provence.  I had an insanely huge breakfast compared to what I normally eat, so I was stuffed by the time we left!  I got the "daybreaker" breakfast, so I had two sunny side up eggs, chicken sausage, and roasted potatoes.  I also got a very lovely passion fruit mimosa. Our breakfasts also came with a croissant, raspberry jam and a piece of brie cheese!!!  It's way too much food, literally two people can split one thing.  I did eat the brie with a little spoonful of the jam, but I saved the croissant for my breakfast today.    After that we came home and got Molly to take her for a walk so that we could justify eating such a crazy breakfast!  We couldn't believe how pretty the weather was, I even wore shorts with knee socks on the walk because it was so warm in the sun that you really didn't need a full on warm up outfit.  We walked for two miles, so not bad.

Last night I did something that I've ever been able to do, and that's to make a pizza crust that didn't taste like crap.  I seriously have trouble sometimes making "simple" things like bread come out right, and I have never made a pizza crust that I've liked.  They're always super doughy or flavorless, and I've never been able to get that crisp chewiness that I really like in a pizza.  I found this yeast specially formulated for pizza dough when I was shopping the other day, so I decided to buy it and give it a try. 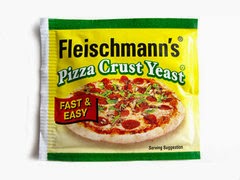 I searched online for a pizza crust recipe that looked decent, and stumbled on this one from Alex Guarnaschelli from the Food Network.  I figure that she is Italian and has a bunch of successful restaurants so that it couldn't be that bad.  I used the pizza crust yeast, and even though it says you don't have to let it rise, I did for like an hour.  I also chopped up some fresh rosemary and added to the dough for a little pizzaz, then topped the pizza with bell pepper, basil, green olives, mushrooms, caramelized onions and cheese.  I have to say, I was so pleased with how it turned out!  The dough was incredibly easy to roll out and handle, and it baked up just the way I liked, thin, crisp on the edges and chewy in the middle. 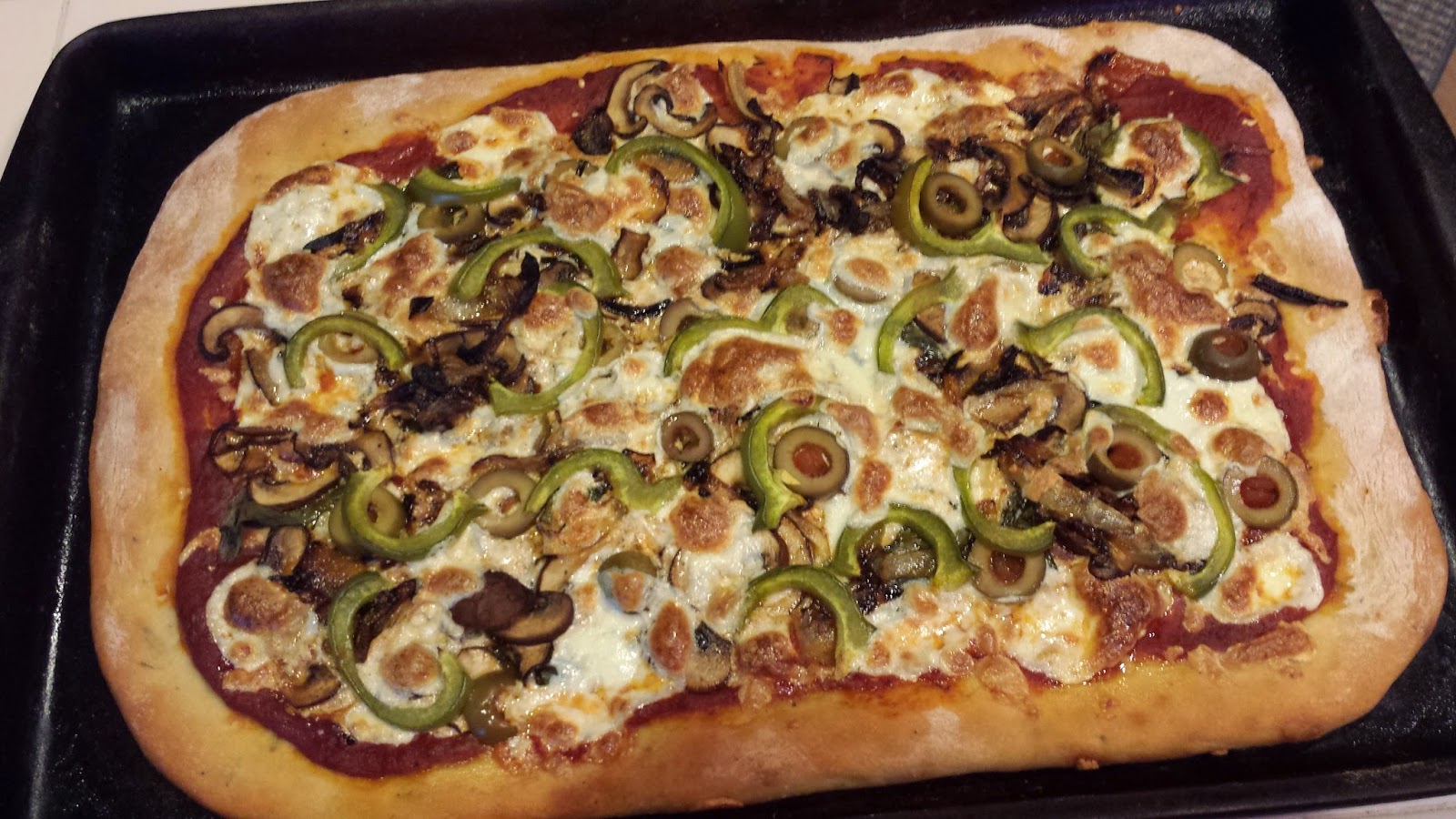 The recipe also made enough for two pizzas, so I froze the other ball of dough plus the other half can of Muir Glen pizza sauce I used, so we'll be able to do another pizza night at some point!

My TOM is in full swing, so I don't have high hopes for the scale tomorrow.  Having a lovely French breakfast plus a pizza night within one day probably won't help my case, but I guess we'll see.  Maybe I'm wrong since I've been more moderate today.  I did do Day 11 and 12 of my Stomach Solution program, so I'm almost done with Week 2!  For next week I'm going to start adding in some ballet barre challenges to the mix, though I need to make a final decision which ones!