So yesterday I got my copy of Sweatin' To the Oldies 3, and not a day too soon since I could have performed a one woman show by heart of the first one.  I busted out the new one today and I have to admit it was pretty amusing since I hadn't laid eyes on it since I was 15 years old.  Some observations.  First of all, Richard always has some show boating hussy in every one of his videos, I swear.  I thought the girl in the orange crop top in the first one was bad, but this girl in her jorts (over bicycle shorts!) is eye roll inducing.  Some of the moves in this one are "sexier", hip rolls and thrusts and that kind of thing, and this girl was so over the top with it.  I caught her at her most glamorous.  ;) 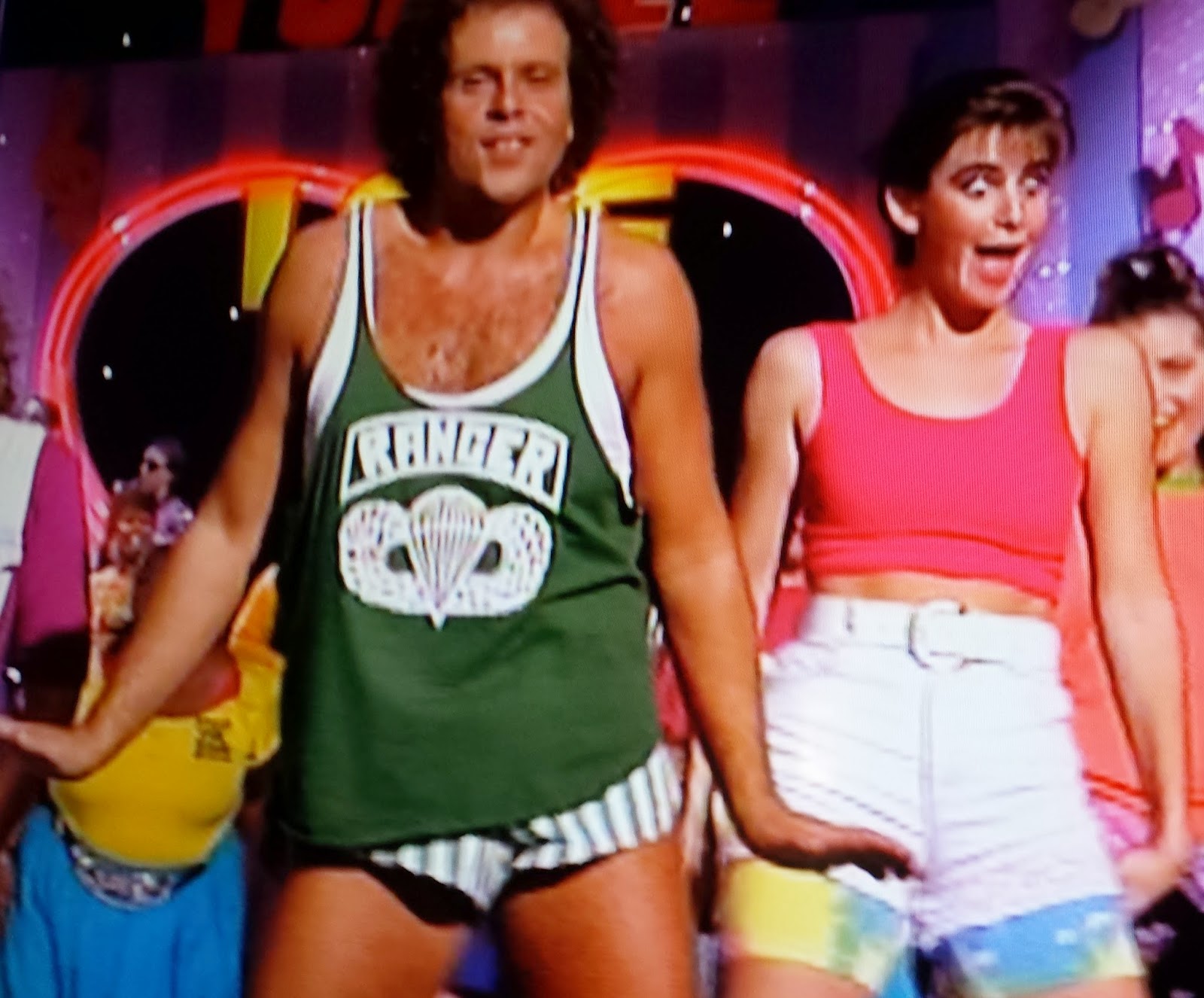 Secondly, sweet Jesus do I miss the 90's.  This was 1991 I believe, so there's still some 80's fashion amazingness, but with that Blossom/My So Called Life thing starting to creep up on the outfits.  And I want to order some Zubaz pants now because several people in the video are wearing them.  If you're a youngun you have no idea what I'm talking about, but it's this gloriousness.

In a world of skin tight pants, I kind of long for the loose and free wheeling ways of the Zubaz.  I just looked and there is still a Zubaz site up where you can buy them, and you can join the "Zubaz nation".  Um, get me my passport, because I want to join.  Let's bring them back people.  And I promise that lady isn't giving the bird, I'm not sure what is going on there other than unfortunate screen cap timing.

Thirdly, I've decided the song "The Name Game" (one of the songs in the workout) is the ear worm from Hell that burrows itself deep in your skull.  You know how you hear stories about the military playing loud awful American music to wear down terrorists before they interrogate them?  Yeah, they could use "The Name Game" to do that.  All day I've been catching myself being like "Molly, Molly-bo-bolly, banana fana fo folly....oh damn it!!!"  Truly awful lol.  I promise I didn't just take pictures, I actually did do the workout, which is a little longer and a little more sweaty than the first tape.

Today overall has been better.  I've felt more energetic and positive, I got both Richard and Zumba done, and I've been really good with my food.  I'm trying really hard to eat back less of my exercise calories on a day to day basis, mainly because I think MFP over exaggerates how many calories activities burn and I don't want to slow down my progress.  I always seem to get hung up around the same weight, and I'm at that weight right now.  From a psychological standpoint I've got to get past that number once and for all, because I'm tired of battling back and forth for the last few years.  I realized this week that I'm at that weight, and I also slipped into bad habits and snacking, so I totally had the "OMG, I'm sabotaging myself YET again" epiphany.  Time to buckle down and move past it.