Last night went just about as planned, and we had a lot of fun, although we were hopping to it all night handing out candy!  When I plugged my Jawbone in at the end of the night, I had a little over 15,000 steps!  We always enjoy looking at all the little kids in their costumes (the pissy teenagers with no costumes, not so much), and this year we were also handing out stickers to the little kids.  They LOVED that, so I may continue to get that as an non-candy option next year.

The food I made was hit and miss.  The stuffed figs (stuffed with a marcona almond and topped with honey, thyme and citrus zest) and the loaded sweet potato bites (sweet potato rounds that are baked and topped with Greek yogurt, scallions and smoked paprika) were amazing.  The edamame dip was super gross, and I would definitely not make it again.  It's the type of thing where you wonder if they actually tested the recipe before they published it in the magazine.  The vegan queso was great, although I wish it had been a little warmer.  Next time I will probably put it in a sauce pan to heat it up.  And I am sad to report that those ginger cookies from the Runner's World cookbook were an utter disaster.  I know I tend to substitute and modify recipes a lot, but I made this one as written.  I knew it didn't look right (this is why I modify recipes a lot, I can tell when something isn't going to work), it turned out more like a muffin batter than a dough for starters.  When I cooked them they looked like little cakes (and like cow flop I might add), and they tasted absolutely wretched.  I took a tiny bite and it was like consuming dirt mixed with pepper.  Note to self, never attempt to make a cookie that doesn't contain butter.  In the spirit of not eating things that don't taste good or make me happy, I threw the cookies away and ate 2 fun size Twix instead.  MUCH better!

We were shocked, but we got trick or treaters up until 10 pm, which kind of pissed us off because our light was off, which I thought was supposed to be the universal sign of "don't knock".  We were both exhausted and wanted to go to bed, but were worried people were going to continue ringing the doorbell.  I told Eric that we had such a surplus of candy anyway, that we should just put the bowl outside so that people could self serve if they were insane enough to TrT that late!  I put a nice note in the bowl saying that we were going to bed, and to feel free to take a couple pieces of candy.  We cracked up when we got up this morning, because all of the candy was gone!  I'm sure some little shit emptied the entire bowl into their bag, but at least we got rid of the insane amount of candy that we had and we don't have to worry about it!

Today was the only dry day in the middle of a really bad front of rain, so I told Eric I wanted to go for a hike to take advantage of it.  I feel like I sit around a lot on the weekends and am not quite as serious about fitness, so I wanted to do something active.  We decided to hike around a local place called Hagg Lake, which is about 20 minutes from our house.  It was super foggy this morning and it was so cold by the lake, which you could barely see because of all the fog! 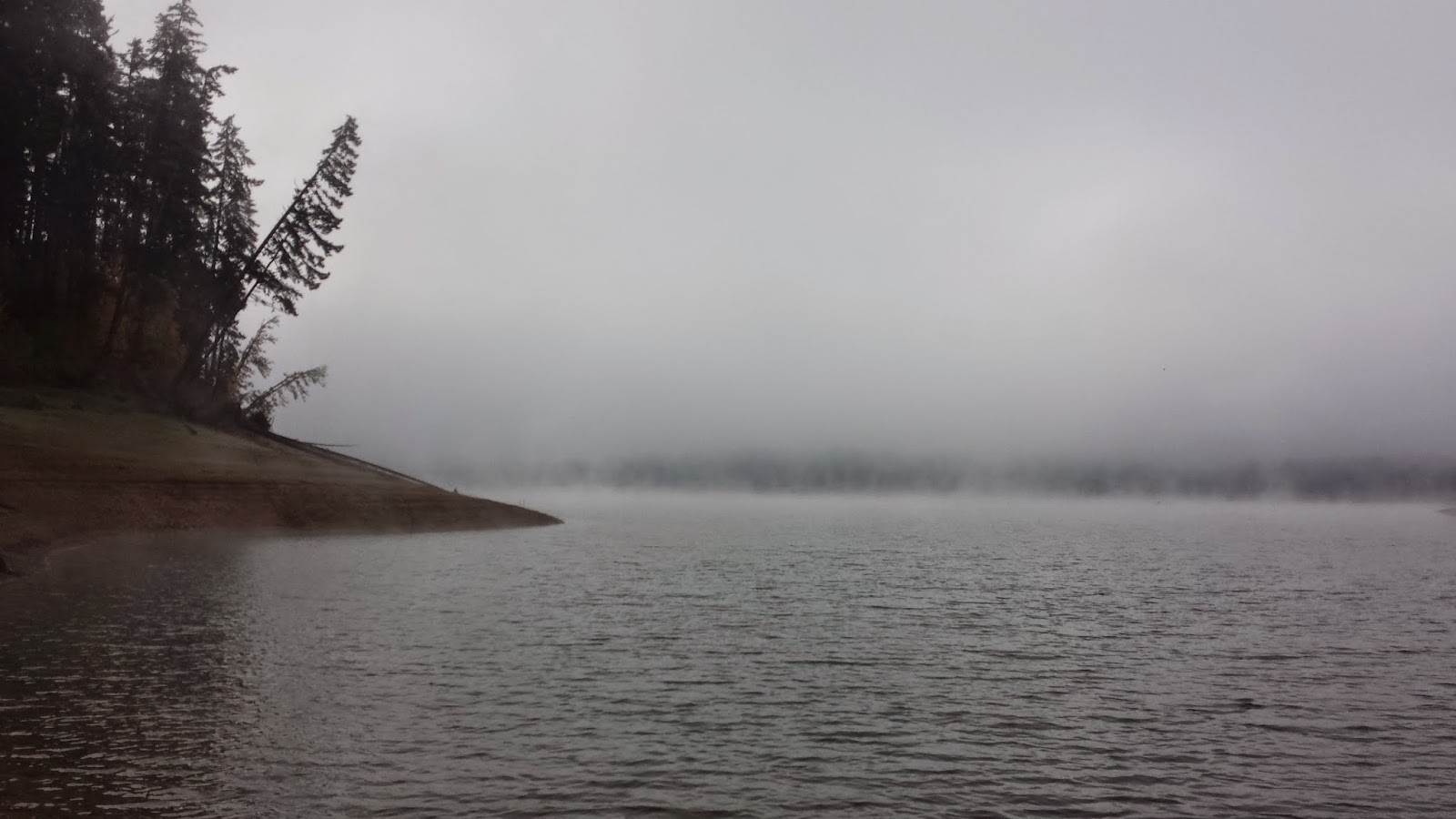 Isn't that pretty?  It was like something out of a movie.  We did a little over 3.5 miles in an hour and 48 minutes, got very muddy, very wet and very cold!  By the time we started hiking back, a lot of the fog had burned off the lake. 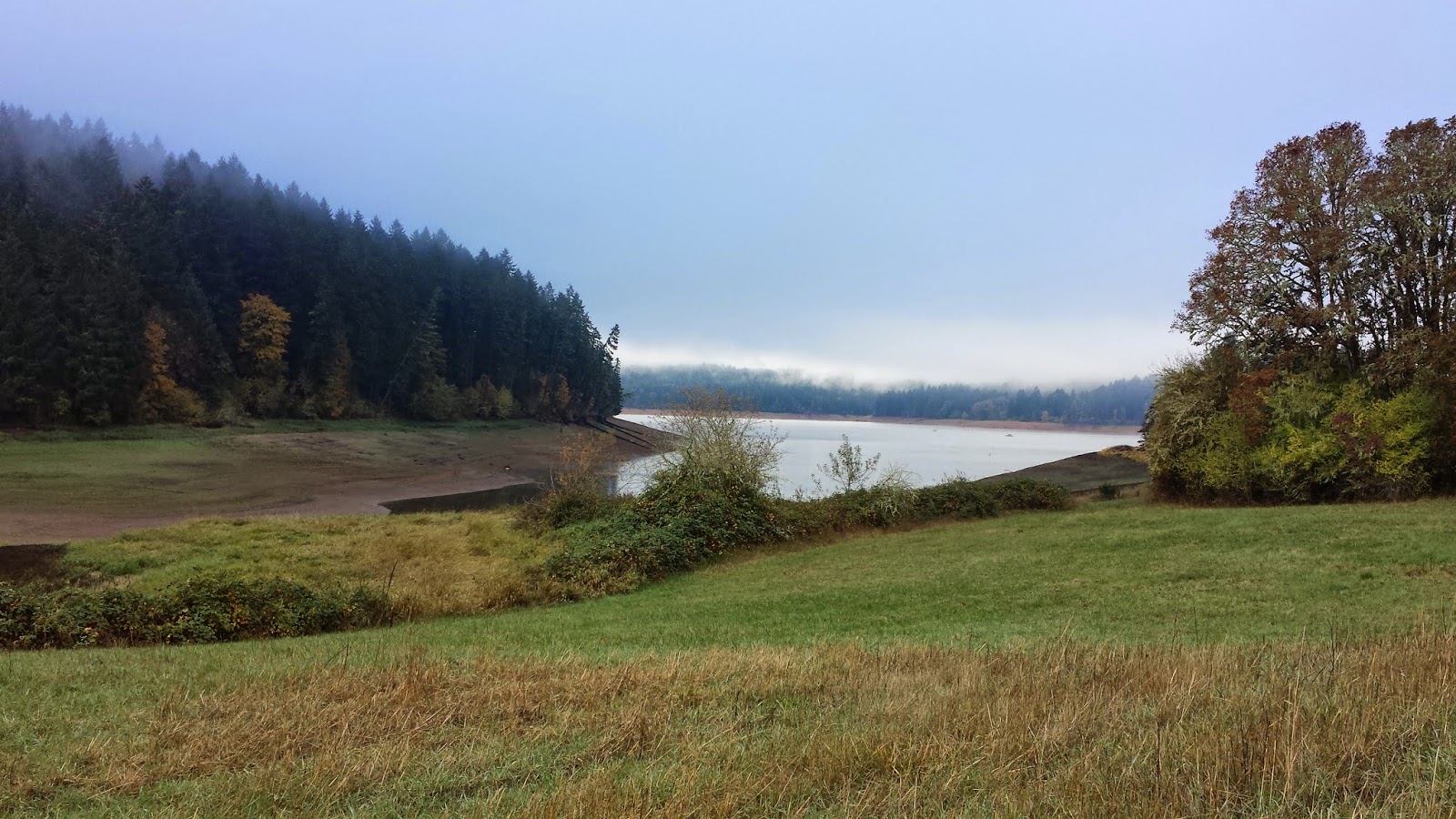 We were famished and didn't eat lunch until 2 pm!  Talk about hangry.  We did get pizza from a local grocery story, but I only had one slice (technically 2 slices, but it was a tiny pizza and 2 slices would have been the size of one normal slice).

Tonight I am going to have a late evening date with Richard for Stomach Formula Day 4 which Eric watches a concert on TV.  Afterwards, I did get us slices of our favorite cake to enjoy, so I'm going to eat that.  (yay for burning tons of calories hiking!)

Breakfast:  2 scrambled eggs and a smoothie made with pineapple, orange and a date
Lunch:  Slice of pizza and half an apple
Dinner:  Shrimp Fried Rice (I used brown rice)
Treat:  Chocolate Salty Dog cake
Activities:  3.5 mile hilly hike and RSSF Day 4
Posted by Runs To Get Waisted at 7:11 PM