Things are less dramatic than my title suggests, although I did wake up with a headache.  This always seems to happen when I go back to a better way of eating and cut down on sugar.  I thought for sure I got such a good mix of carbs and natural sugars in yesterday that this wouldn't happen, but I guess I'll just have to deal with it the next couple of days.

The more worrisome thing is my foot being so sore.  Since it's something that I've dealt with for years at this point, I know it can get really ugly really fast if I push too much.  After my walk/run yesterday the arch of my left foot was in borderline unbearable pain, and was still hurting when I woke up this morning.  I am definitely bummed out, and it's something I have to turn attention to ASAP before it gets worse.  I started out the morning with yoga, and judging by how tight/painful a lot of my leg muscles/tendons are, lack of stretching is the culprit.  I also decided to walk my scheduled 3 miles today instead of running, but even that was pretty painful.  I'm hoping that being really strict about doing yoga will put my feet back where they need to be.  I don't want to be injured right off the bat.

I did really enjoy just walking today.  It rained a lot last night, so everything was damp and there were so many leaves on the ground.  Fall is my favorite time of year, so it was nice to take a long relaxing walk and drink it all in!  I technically did an hour and 10 minutes of walking, but I deducted 5 minutes from that number for My Fitness Pal to account for Molly's dicking around.  She is a HUGE smeller/territorial pee-er, so she definitely adds some time to our pace!  I am going to have to figure out another arrangement for her when my mileage gets higher, because I don't know that she can handle more than 3 miles.  She practically acted like I'd had her on a 10 mile trail run than a leisurely 3 mile walk! 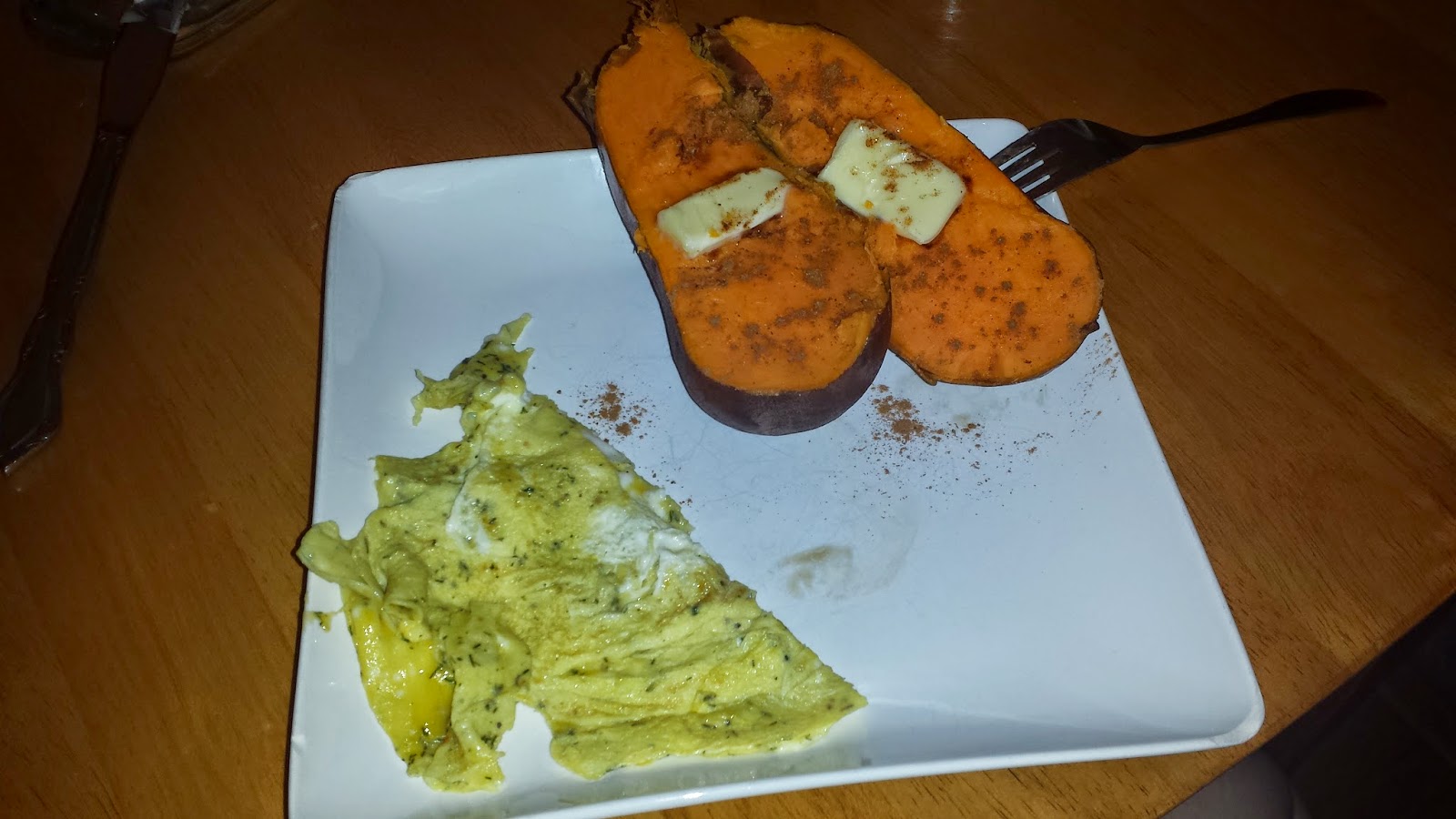 Again, my picture doesn't make this look very appetizing, but this was a great breakfast.  I am a weird person who will eat random combinations of things, and I love nothing more for breakfast sometimes than a sweet potato with butter and pumpkin pie spice.  In fact, I would eat baked sweet potatoes at just about every meal if I could, I absolutely love them.  I wanted to make sure I had protein with it, so I just scrambled an egg with Mrs. Dash and some dried dill.  We got super giant honeycrisp apples from the pumpkin patch on Sunday, so I cut up half for Eric's lunch and had the other half with breakfast.  It's not in the picture because I was snacking on it while I was cooking.  :) 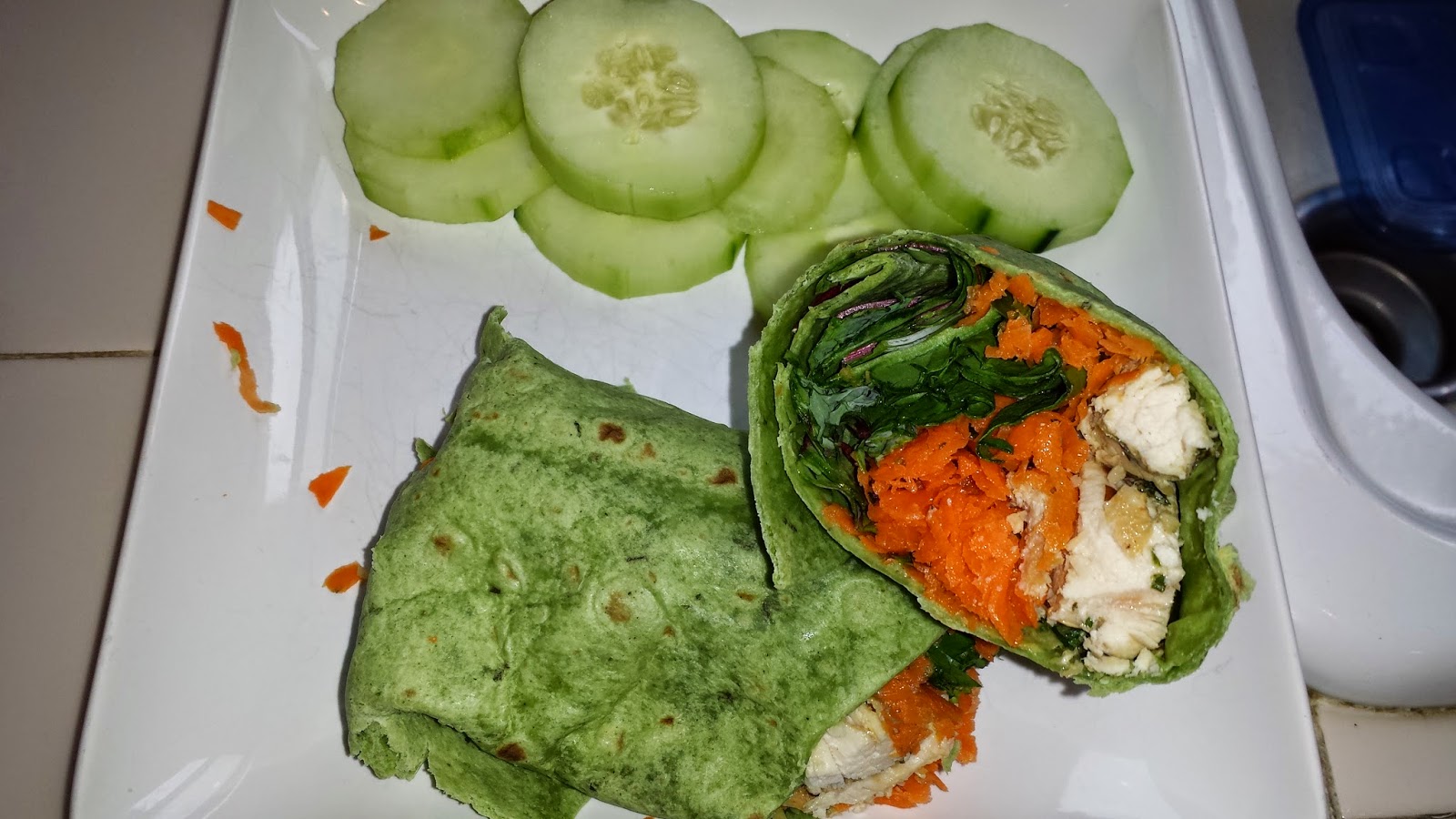 I failed this recipe on many levels, starting with the pesto.  I forgot to buy pinenuts, and the only nuts I had on hand were salted Costco almonds!  I had no Parmesan.  I have a fancy Vitamix blender and tried to make the pesto in that, but the proportions were so small that the stupid blade wouldn't blend it, so then I had to add water to add some bulk.  The pesto ended up never blending, so everything was just in giant chunks.  Note to self, next time just buy pesto or make it in the damn food processor.  The Vitamix pretty much does smoothies and soups and that's about it.

Secondly, the original recipe calls for this to be on an English muffin, which I honestly don't like, so I just bought wraps since we're having breakfast burritos in a couple of days.  Let me just tell you guys, there are a lot of things I'm good at, but wrapping wraps/burritos is not one of them.  I literally had to watch Youtube videos last night to get the basic gist of wrapping a burrito successfully, and I still fudged up the first one I did this morning.  Since I am a wonderful wife, I kept that one for myself and managed to do a better job on the second wrap, which I gave to Eric.

The wrap was just okay.  Besides the chicken the wrap has shredded carrot and baby greens in it.  It was pretty bland and boring, but I would call it less of a Runner's World fail than it was a Mary fail.  If I made the adjustments I talked about above it would probably be better and more flavorful.  I would also probably just use shredded rotisserie chicken in place of the grilled chicken breast next time, just so that the meat is more juicy.

Verdict:  Eh.  Would attempt one more time with adjustments though.

I bought this tea the other day just because I had a coupon, and when I saw the flavor, it just sounded good.  I have never understood why people love the syrupy sweet versions of chai tea from coffee shops, but I generally like unsweetened normal chai.  Last night I was really having the shakes because we normally have dessert in the evening.  I wasn't truly hungry, but just out of habit I wanted something sweet, so I made a cup of this tea.  I had plenty of calories left in my macros to throw in a tablespoon of half & half along with a teaspoon of coconut sugar to make a little tea "latte".  I took one sip, and let me just tell you, this tea warrants a George Takei "Oh my!"


It really stopped my brain from going into overtime about wanting sweets, which I find tea is typically pretty useful for anyway.  It was warm, spicy, creamy and pretty perfect for a chilly fall evening.  And the milk/sugar only was a total of 35 calories, so it was a no brainer treat.  I made another cup like this today at around 3 pm as a little midday pick me up, and it didn't disappoint.

Every year we go to our local pumpkin patch to get our Halloween pumpkins a gallon of apple cider.  There is just something about the real deal, especially when you warm it up in the evening.  It's so sweet, spicy, apple-y and good, and pure autumn in a cup.  I really don't have it except for October through November,

Tonight as a treat/dessert I am making hot apple cider, but taking to the next level with two little mini splurges:  a tablespoon of jarred caramel and 2 tablespoons of whipped cream.  I already can't wait!!