You guys will have to forgive me for the deviation from health and running so we can talk about music just for a bit.  I will get to all the health stuff, but I need to blow off some excitement steam.  Today is an exciting day because the Rock and Roll Hall of Fame released the ballot for the 2015 class.  The final nominees will be announced in December and the ceremony will be in April.  We are tentatively planning on going to the ceremony again, having been to the 2012 and 2013 ceremonies.  It's literally our version of the Oscars!

The ballot this year is pretty interesting, with only a few people who give me major scrunch face.  The commentary next to the acts are just my opinion, and my 6 picks are in bold:


I am probably a lot more forgiving towards the Rock Hall than a lot of people, although I do question why they continue to nominate bands like Chic when there are more important bands that have been snubbed.  Even though it's not my music of choice I am not against rap acts getting in, especially bands like N.W.A and Public Enemy who have very political music with a more gritty tone.  (In a year where law enforcement practices have been under a microscope, putting in a group whose biggest hit is "F the Police" would be quite interesting to behold).  I still think metal is shamefully unrepresented and unappreciated, but I can live with this list.  And Stevie Ray...I almost need a moment of silence every time his name is mentioned, his music is that good.  I really hope this is his year, he is the one I am most passionate about.  The one I'm pissy about is Green Day, but I am quite sure they are going to be in the 2015 Class, so I'm just going to have to make peace with it and let it go.  I hope we're able to work out going to the ceremony, they truly are amazing moments in music history and you see crazy stuff like Rush and Chuck D from Public Enemy singing together.

Okay, nerd moment is over.  Thank you for indulging me!

I finalized my menu for next week plus the shopping list that goes along with it, and I am definitely excited about it.  The stuff in parenthesis indicates what cookbook it came out of and the page number of the recipe, just to make my life easy. 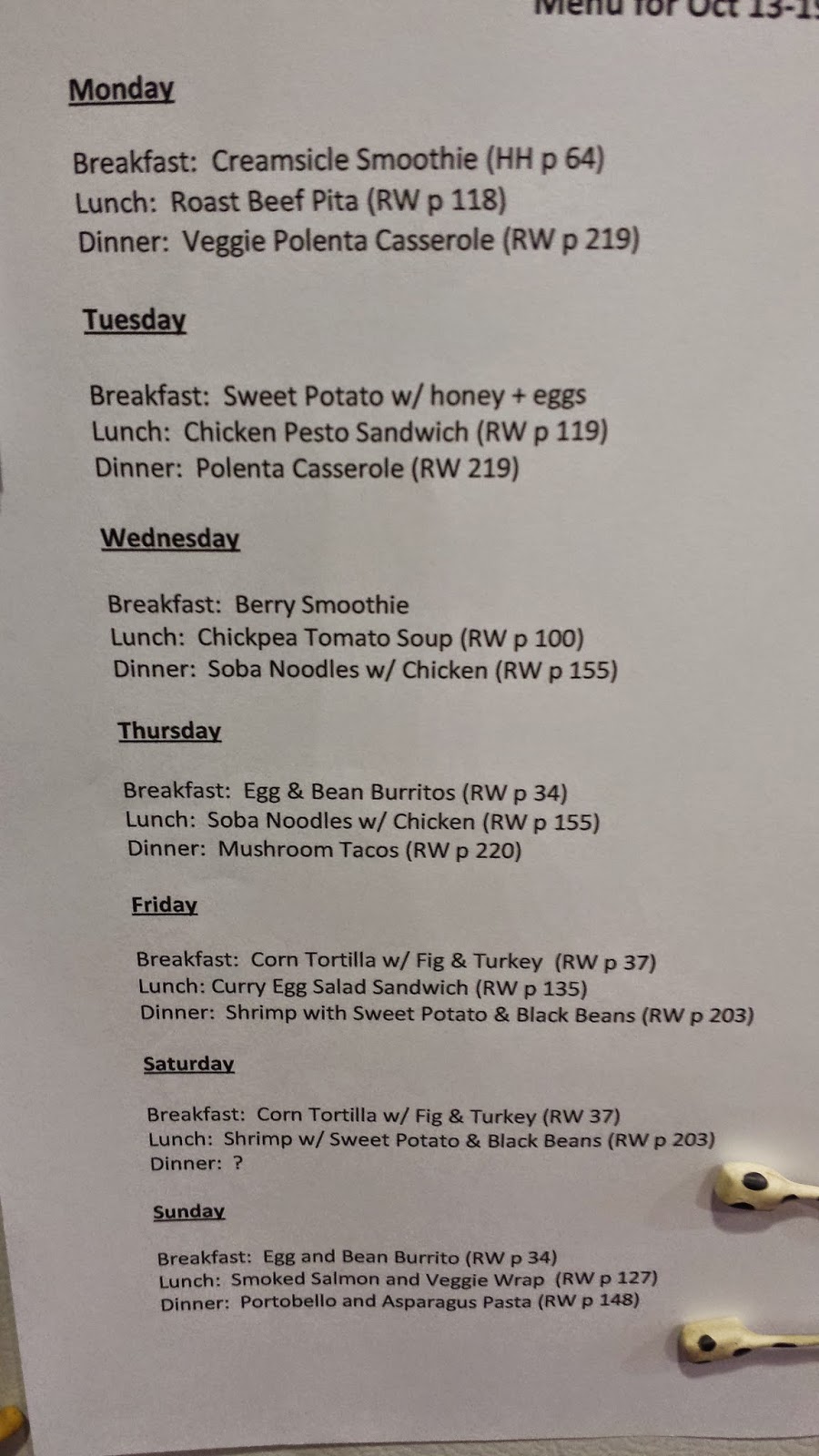 I feel like this is a pretty balanced and healthy menu with some variety so that I don't get bored.  I really did try to balance the amount of meat I was eating per day, and trying to not have too much carby stuff in one day.  Moreover, it just looks like a very satisfying menu where I will not be hungry.  I also tried to utilize leftovers where I could.  There is a question mark on Saturday night because my aunt and I are getting together, so I'm not sure what I will make, but I'm pretty darn certain that a bottle of wine is going to get opened!  I am going to sit down and calculate all of the calorie crap on this stuff over the next couple of days so that I don't have to deal with it next week.  I'm interested to see what some of the macros will be and if I will have to work some more exercise into some days to account for what I'm eating.

I also took that training plan I posted the other day and made it my own, and switched around when the cross training, long run days and rest days were. 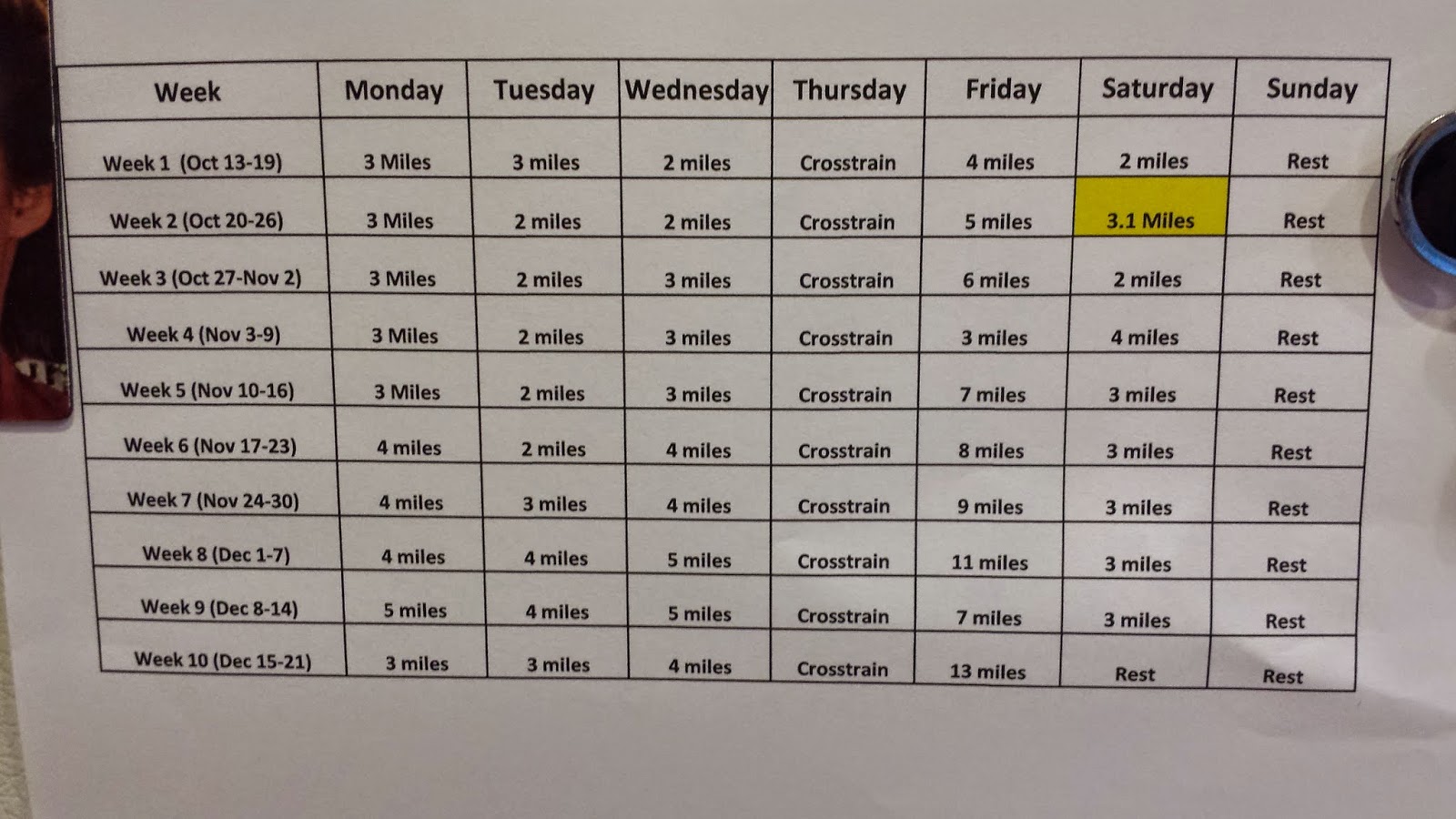 Obviously things will come up and certain days may get switched around, but I feel like this is a pretty good start.  And since I'm using yoga as my cross training activity, I really felt that one rest day (football Sunday, natch) was all that I needed.  And if you're wondering why one square is yellow, it's because that's the day of my Halloween 5k.

I am still in deep debate about the marathon thing.  Knowing when the Rock Hall ceremony is going to be actually helps, because it rules out some things and opens up possibility on other things.  Ironically there are a couple of marathons in Ohio around the time we'd be going, but I honestly think it would be foolish to try to work them into the trip.  There is a marathon the day after the ceremony, but the thing you have to understand about the induction ceremonies is that they are MUCH longer than you think.  The 2 hour thing that gets played on TV is a fraction of what actually goes on.  In 2012 I think we were there 6 or 7 hours, and it was about the same in 2013.  It gets majorly edited down for TV, and for all the other unedited awesomeness you see in person, there are things like a 20 minute ass numbing rambling acceptance speech from Quincy Jones you have to sit through.  I can't imagine leaving the ceremony at 1 am, then having to drive to some BFE in Ohio mere hours later and then running 26 miles.  It just doesn't seem like a good or fun idea. If I do one, I want it to be a good experience and the focus of that weekend.  So, April may be out.  I feel like it would be best to do a marathon in March, if I still intend to do one and have the fever for it.

Well friends, I will keep you posted.  Rock on.

Posted by Runs To Get Waisted at 8:16 AM