Yesterday was the Halloweenathon 5k, which was my first race since February.  I was definitely a little nervous since I haven't raced in so long, and let's face it, because I haven't run in so long!  I am pleased to report that the race went pretty darn well!  The race is done by this company called Uberthon and the races are usually small, and better yet, close to my house!  As much as I love Portland, it is nice to do these smaller local races sometimes.  We don't have to leave the house as early so I'm able to kind of take my time getting ready and prepping for the race.  I got up early enough to do the first half of my Yin yoga DVD, which focuses more on legs and hips and the second part is more about stretching the back.  I grabbed a quick smoothie and then got myself ready.

The race location was at a local golf course, and Uberthon was bragging that we had almost exclusive access to the whole course, and that we would be running on the golf cart paths (more on that in a second).  I was concerned that it was going to be storming the whole time, but the rain stopped right as we were driving over, and the sun even started peeking out!  The temperature was hovering around 49/50 degrees, so it was definitely the perfect coolness. 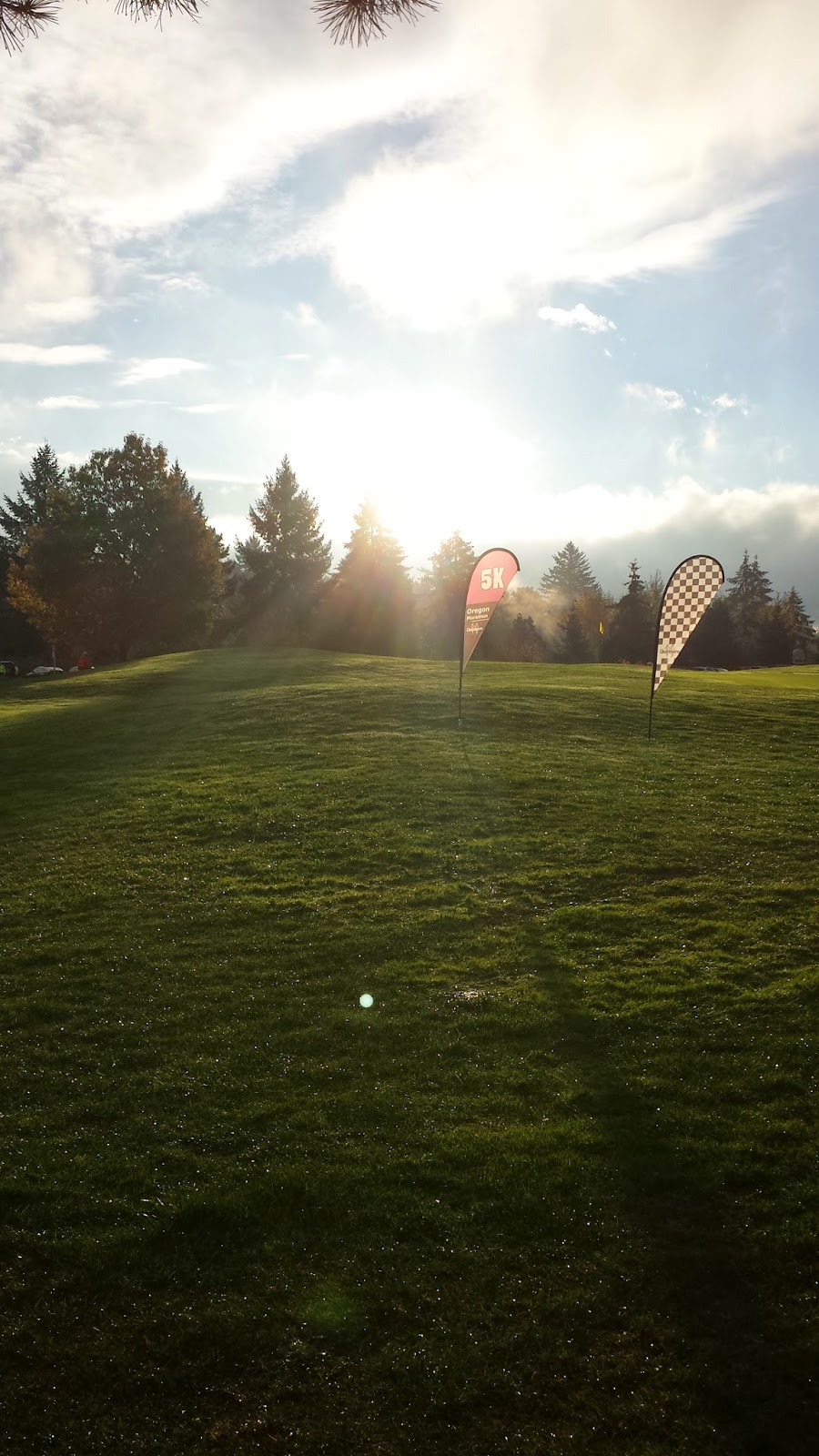 As we were standing there I heard someone say our names, and I saw one of my old coworkers from The Place That Shall Not Be Named coming towards us.  Libbie was the coworker I talked about running with for a spell during the Portland Marathon, and she loves running/racing.  I hadn't seen her since she left our old job, so it was good to catch up.  We ended up lining up together at the start line and running together for the whole race.  As you guys know I am typically a lone wolf when it comes to running, but Libbie was actually a good running partner because she's mostly silent, and we run at about the same pace!  I also feel like she pushed me (even if she didn't know she did) to keep running and to only take one walk break.

So I'm going to call BS right now on the "golf cart path" thing, because 90% of the course was on grass.  Now to be fair I don't play much golf due to the fact that I have no coordination and I would look horrible in plaid pants, so maybe grass IS a golf cart path and I don't know what I'm talking about.  But the way the email was worded was more like "you'll be running on asphalt paths, and sometimes grass", so I assumed the carts ride on the asphalt.  It was completely the other way around.  I train exclusively on asphalt, so running on grass was a whole new ballgame.  I actually prefer to run on asphalt.  We've also had some wicked rain, so the "grass" was really mud.  Three steps over the starting line landed us square on a patch of squishy mud, and my feet were soaked.  It was so gross!  Running in the mud was exhausting, so I was relieved that I had done yoga that morning and at least somewhat stretched out my legs, but was also worried if running on a foreign surface like that was going to cause an injury.  It also amazes me that I managed to do a marathon last year, because this 5k felt like it was never going to end!  There was also a 10k and 15k race, and I could not even have imagined doing another round or two on that course.

I took a short walk break around a mile and a half, just long enough to give my poor legs a break.  After that we kept running, even though my legs (specifically my quads) were screaming at me to stop.  This is where I was glad that Libbie was with me, because it made me keep running so that I wouldn't look lame.  ;)  Eric was cheering us on at the finish line, we crossed over with little fuss, and they managed to mispronounce my last name as I was crossing over.  It's like, if you guys can't pronounce my simple 2 syllable last name, I would love to see what you would have done with my 4 syllable, 12 letter maiden name!

I am pretty happy because my chip time was 39:33, so I did a sub-40 5k after months of not racing, and it's also not that far off from my 5k PR, which was 35:16.  It's always good when you do better than expected, and a relief when you haven't lost too much ground.  And either I AM losing weight or my husband is getting better at taking pictures of me, because I actually kind of look thin here!  This is also why I wish it was socially acceptable to wear compression gear everywhere.  ;) 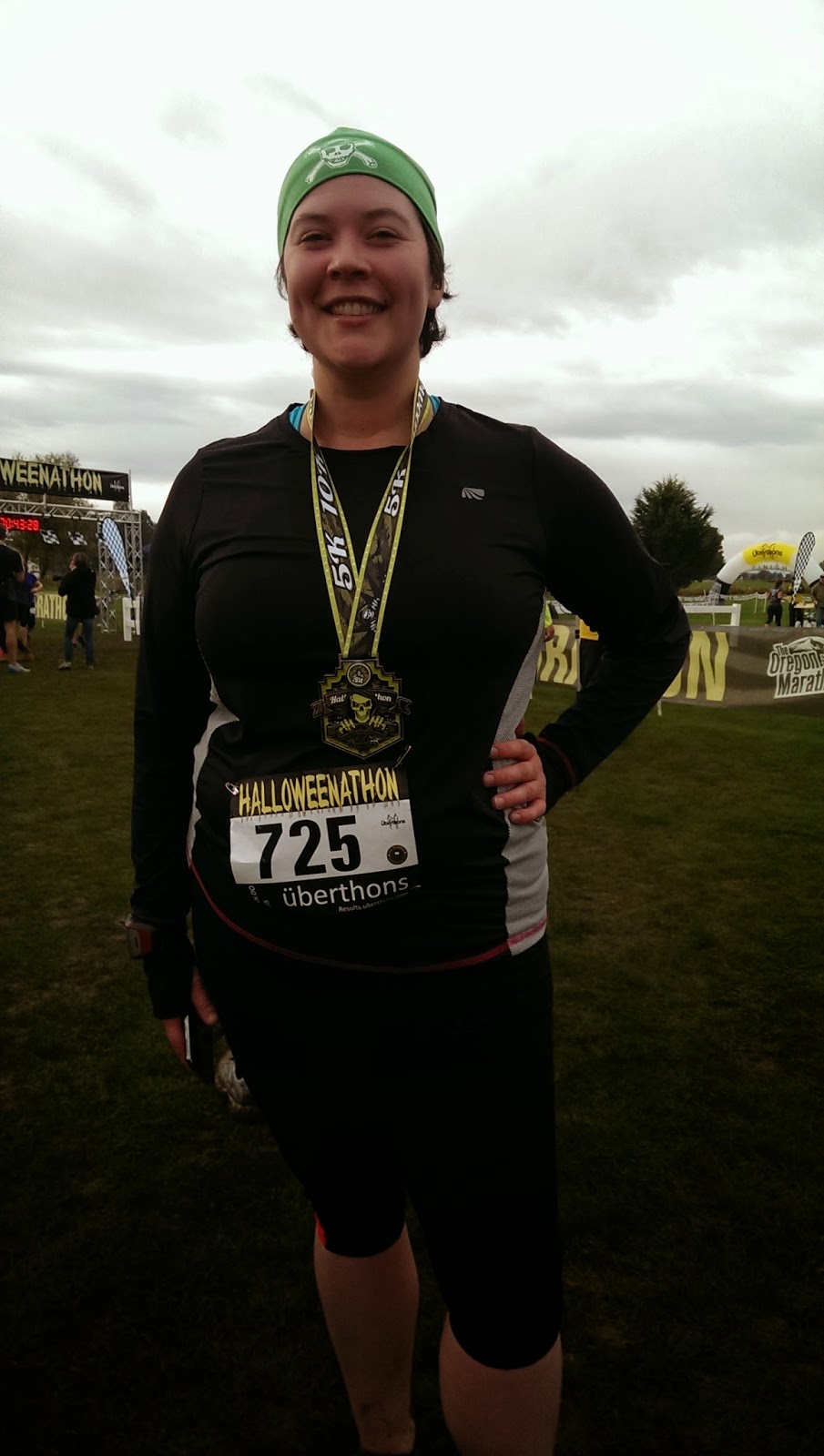 And you'll have to forgive me for taking a million pictures of the medal, but it was pretty cool.  Uberthon is the same group who did our turkey trot last year and gave out my wonderfully tacky turkey medal that I absolutely adore, and weighs 20 pounds (roughly).  They did it again with this medal, it was totally awesome! 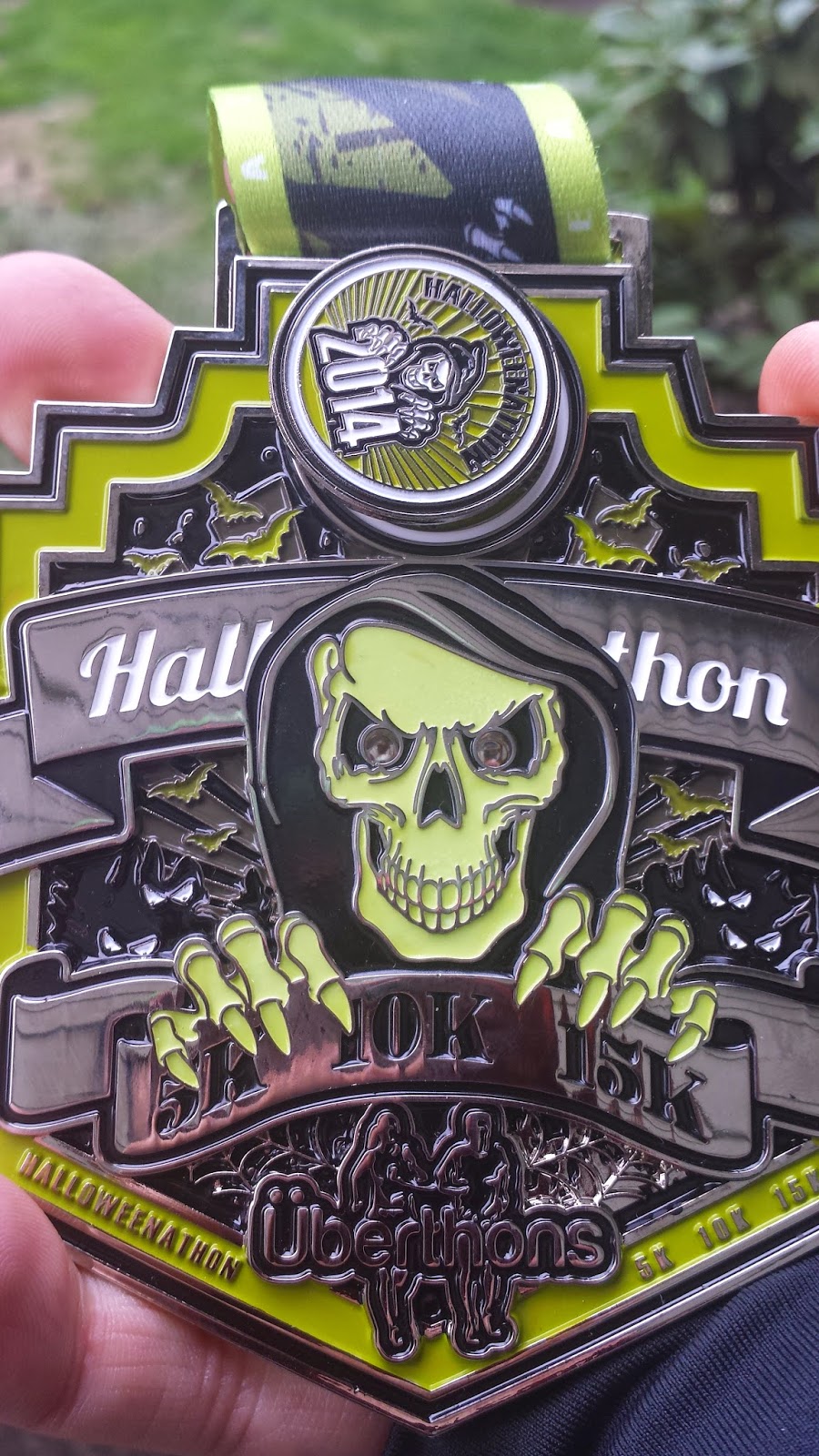 I kind of like skeletons and grim reaper stuff for Halloween, so I definitely loved this.  BUT, that's not all.  Not only is it creepy and cool, but his eyes blink.... 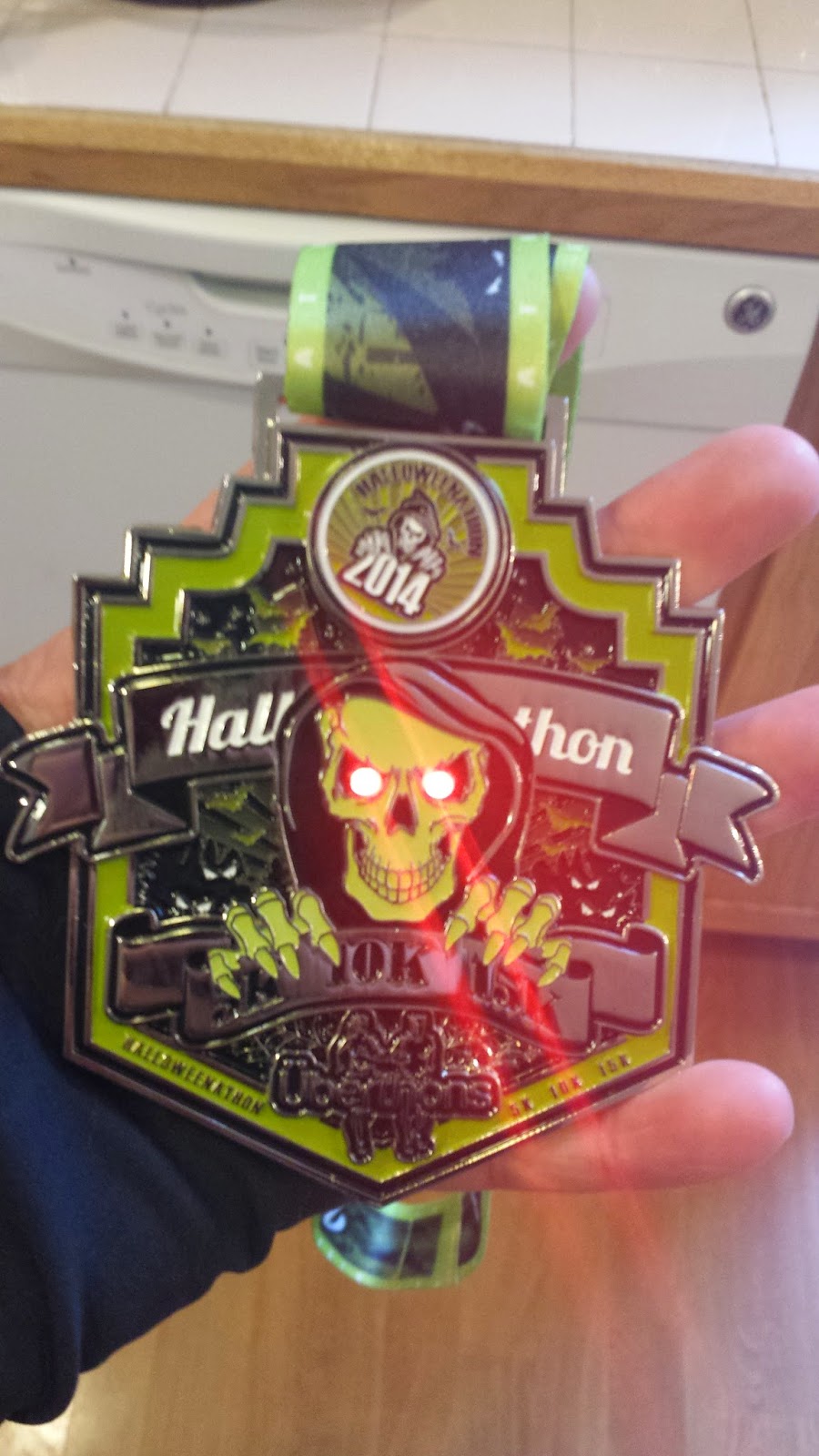 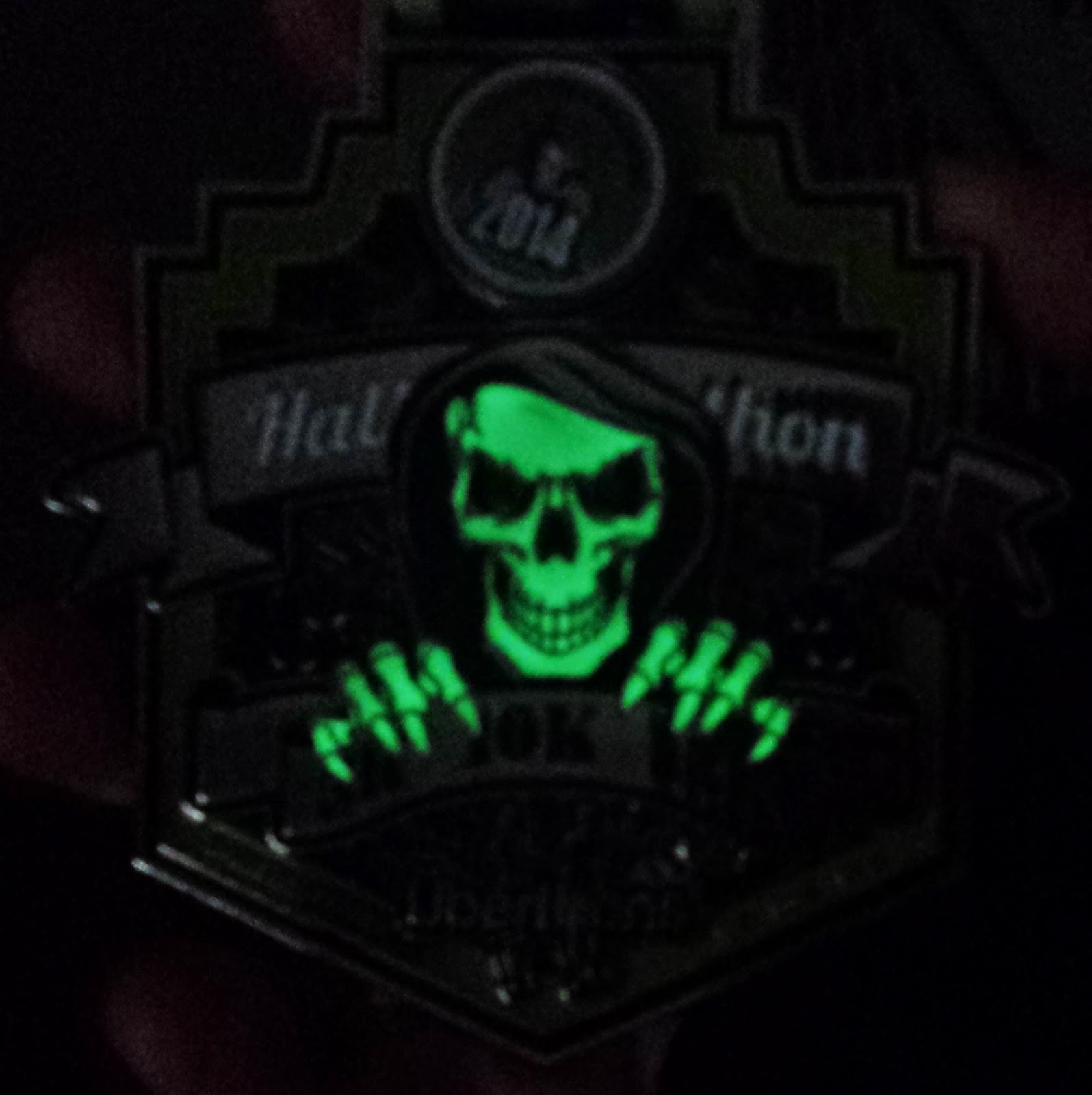 We came home and cleaned up, then I made a modest turkey wrap lunch since I wanted to save my calories for our jaunt downtown.  We went to see this documentary about the singer Nick Cave called "20,000 Days On Earth".  I honestly didn't know much about Nick Cave or his music, but Eric is super into him and wanted me to see the documentary to see what I thought about all of it.  It was actually very interesting and entertaining, even to someone like me coming in with no knowledge really, and it made me want to delve into his music more.  I'm quite sure this is mission accomplished for my hubby!  ;)  Afterwards we went to one of our favorite beer places called The Abby Bar and got some really freaking awesome Belgian beers, including this amazing sour cherry beer that I fell in love with.  We sat and discussed the movie, then started arguing (good naturedly) about the Rock and Roll Hall of Fame, then disagreed on whether Bill Withers was dead or not.  We're a barrel of excitement, let me tell you.

After that we had an appointment to do karaoke for a couple hours at this place that rents private karaoke rooms.  It's another one of those weird things we do, but it's so much fun!  You can control everything in the room via smartphone, and it's just kind of fun to have a karaoke room all to yourself.  I've sat through too many crappy karaoke nights with drunken frat boys singing Tenacious D, drunk broads thinking they are the second coming of Pat Benatar and douchey KJs with a power trip to ever want to do karaoke any other way.  We had a grand old time eating and drinking way too much and singing silly stuff.

Definitely a great day and a great race experience!  My menu today was impressive until dinner, but I only went over my calories by about 400, so as usual I'm not too worried about it!