Wow, so I got some sleep and what do you know, I don't sound like a total crackhead while writing a post!  My post last night was...disjointed.  I guess my philosophy is that it's better for me to just throw a post up that sounds off than to wait to perfect it, otherwise it's never going to get put up.

I have spent the morning researching training plans for running that are going to work for me.  I haven't run a single step since February, which is pretty sad and something that needs to be amended!  Getting back into it isn't going to be easy, which is why I have been putting it off.  My brain honestly went a bit haywire after my marathon last year, it really did mess me up, which makes me question why I want to do another one at all.  I was psyched about running for a couple of months after, then suddenly everything came crashing down from a life standpoint.  I really started to resent running as something else I was failing at and yet another thing that was encroaching on my life.  Which is silly since running was keeping me in shape and probably doing more for my stress levels than anything else, but that was my thought process.  After the Heartbreaker Half in February, I was just done mentally and emotionally.

But since then every time I see someone out for a run, I feel guilty.  Every time someone I know is doing a race, I feel guilty and left out.  Due to running so many races over the years, I now get at least 10-15 emails a week from various running companies saying "Hey, such and such race is open for registration!", so I can never seem to get away from it.  I was cleaning out a room and saw all of my running medals, including my marathon one.  Running seems to haunt me whether I'm doing it or not.  Then the nagging marathon thoughts started up again, which I can't even believe.  I am literally in denial that the words "I kind of want to do another marathon" flashed across my brain, much less were uttered aloud.    I still don't know what to do about it, but for now, I'm just going to start training to be comfortable with a 10k distance by the end of the year, and then just take things from there.

Since I wasted enough years at my job making spreadsheets, I wasn't about to make another one for a training plan.  I just did a Google image search for "10k training plan" and scrolled though to see what spoke to me.  This one is actually for a half marathon, but it's a "Couch to Half" type deal, and it looks pretty reasonable.  To give credit where it's due, it looks like the blogger who posted this is IHeartVegetables.com, and the training plan is actually from Fitness Magazine: 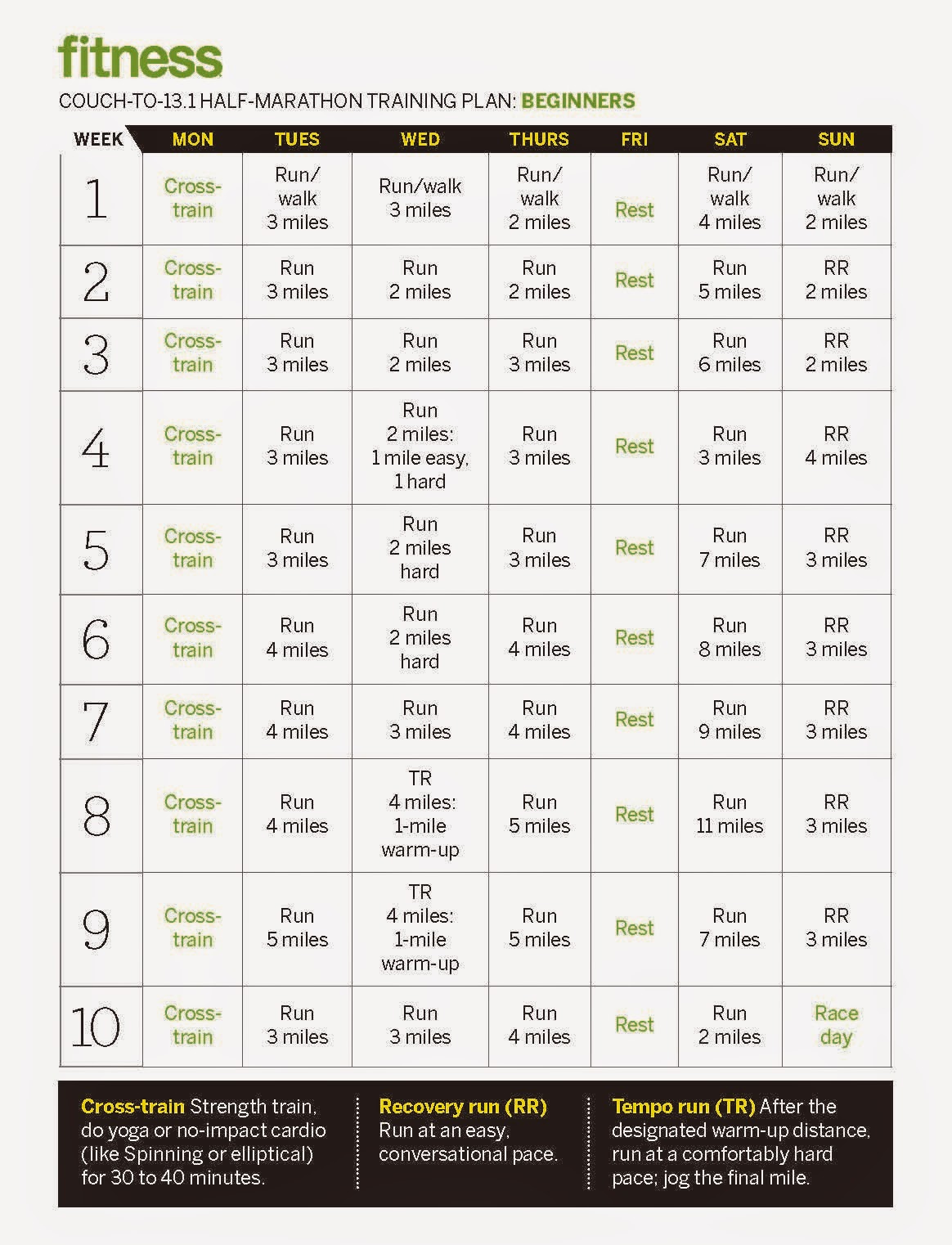 Nothing scary here really, and I can always repeat a week if I feel I'm just at a certain level.  The cross training is going to be yoga, which I also turned my back on and shouldn't have.  My back and feet are so screwed up!  It literally hurts to sit, that's how screwed up my back is.  If I'm going to run, I'm going to have to be better about doing yoga because it's what keeps my feet from going south on me.  The plan is to start the training plan next week!  Hopefully some stuff starts updating on Running in the USA so that I can find some races to keep me motivated.

The nutrition part is something I'm still working on.  Part of me wants to go back to doing the PINK Method since that was very successful in the past, and I know in the reset phase alone I can lose a grip of weight.  Admittedly it is also very limiting (although God knows I could use some limits), and I would definitely worry about getting enough calories once I do longer running distances.  The thing that was so great about PINK is that there is really no tracking involved since basically you are eating plants and proteins.  I've discovered I just really despise tracking my food, even when I have the time to track it.  It's not even the being accountable part, it's just the I'm freaking lazy part of it all.  It's the measuring, the searching, the calculating, etc.  I guess I also resent that I'm one of those people who is going to have to somewhat track for the rest of my life.  BUT, if I want an eating plan that allows for treats (and let's face it, life without treats sucks), then I have to track.  It's just my burden in life I suppose.  Regardless, I've got to start doing something.  If this marathon thing happens in earnest, I do NOT want to run a second one being at the weight I was when I did Portland.  Even for a half, I just want to be lighter.  It's just too hard.  I mean I want to be lighter in general, but running at my size blows.

So there it all is.  I'm going to spend the rest of the week really getting my head together, which admittedly is more difficult that putting things into principle.  I want to make menus and all of that fun stuff, and want to update you guys later in the week with where I'm at!
Posted by Runs To Get Waisted at 8:46 AM