I know everyone who hangs around here should be used to this by now, but sorry that I haven't blogged in roughly nine thousand months.  It's a horrible habit that I can only blame on being a scatterbrained Sagittarius.  I always say to myself "I need to write a post", and then promptly forget about that fun fact like 10 minutes later.  I am definitely still in a state of thrash with my life, and figuring out what I want to do ultimately long term.  That is mostly the reason I haven't blogged, because there's just been a lot on my mind.  I've also been working hella long hours at the winery, so any free time I get to myself are pretty cherished, and I'm probably not going to spend it blogging. But, I'll try to be better about it.

Physically I still feel awesome compared to how I was when I left the old job earlier this summer.  Short of taking nice walks with Molly, I haven't hard core exercised or really worked on nutrition since I quit.  I didn't realize how completely unhappy and burned out I was with running, and my heart simply wasn't into it when I thought about doing again.  Also, this summer was the hottest we've had since 2009, and after the misery of summer marathon training last year, I didn't have the heart to get out and do anything.  The summer was absolutely miserable here, and I am thankful it's over.  I am curious if this is an official thing that people have, but I actually feel I have reverse SAD.  I am completely depressed and miserable during summer, and don't even want to go outside.  Any temperatures above 70 degrees cause me to go into a glass cage of emotion, and I actually start to get major anxiety when it is hot for such a long period of time.  I feel violently and irrationally angry when I hear people here say how much they love the 95 degree weather.  Oregonians for whatever reason have the opinion that unless it's 95 to 100+ degrees every single day that we don't have a summer, and it makes me want to slap some bitches and tell them to move to Death Valley if they love the heat so much.  I am not a nice person during summer, and I feel like I can't be the only one that hates it!  However, once the weather here turns back to cold and raining, I practically want to dance a Bob Fosse routine down my street.  The sound and smell of rain is just glorious to me, and it makes me want to get outside and do stuff.  The rain started again this week, and I am soooooo happy!   Molly and I went for a nice walk yesterday, and I loved getting rained on and seeing all the fall leaves on the ground.

The cooler weather has done something else to me.  It caused a nagging thought to pop in my head that I never thought would be there ever again.  I was able to push this thought away initially, but it kept floating back at the most random times, until what I was thinking flew out of my mouth at dinner the other night to my poor husband.

I kind of, sort of want to do another marathon.  Cue the Stefon face. 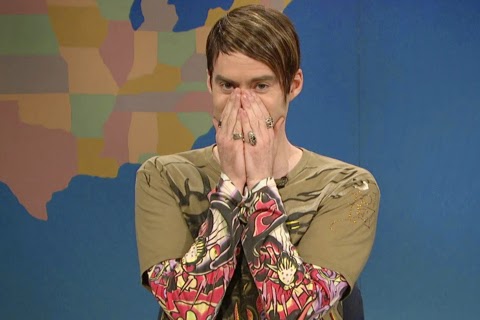 I know.  The joke is on me, especially after saying multiple times that I am "one and done", after posting several posts roughly saying "screw ever doing that again", etc.  I was just looking back on my old posts from last year, trying to remind myself of how much training sucked, and laughing at myself for saying I'd never do another one.  I don't even know what possessed me to think that it's a good idea, or why one day the thought slipped into my tiny brain.  But it's there.  When I told Eric he got a frightened look on his face, probably because unlike his idiot wife, he doesn't have amnesia about the many torturous months he spent supporting me and having to listen to me bitch and cry after every long run.

So yeah, I don't know what to do.  I feel like it's one of those things I'm going to obsess about until I do it.  If I started training now, which I'd have to start from the ground up since I'm super out of shape, it would put me on target to do one in the February to April range.  There isn't really a local marathon during that time that I see on Running in the USA, so it would likely mean a destination race.  But to where?  It's just a lot to figure out.

So yeah...guess I'll keep everyone posted?