I hope everyone either had or is having a wonderful St. Patrick's Day celebration, depending on what time zone you're in or what stage of partying you're in.  ;)  We opted for a quiet evening at home, since I am getting old and crotchety, and I worry about things like a million drunks being out on the roads!

Every time St. Pat's rolls around, I can't help but think of mine and Eric's first St. Pat's together.  We had only been dating for a few months, were even more freshly engaged, and he had just moved up here and was living with me.  I just remember we spent part of the day at an Irish bar, went to a natural store and bought a million different fancy berries and fruit, then came home that night and I used my Jack LaLanne juicer to make about a million fresh juice martinis while we binge watched Season 9 of South Park and laughed our tails off.  I'm sure that's exactly what Jack LaLanne wanted people to use his juicer for by the way, was to make a buttload of vodka soaked cocktails, but they were so delicious!  I just fondly remember that day what I can remember of it, and it comes to mind even 8 years later, just because we were still so newly in love and giggly about everything.  Such good times.

Last year of course I did the Shamrock Run in Portland, but opted to not do it again this year.  I am kind of being choosy this year about the races I do, and the Shamrock was just a little too big for me.

I am entering week two of food tracking and things are still going great.  I shed about 5 pounds last week (!!), which I think mostly was due to getting more water and less salt, and obviously less calories.  Either way, I'll take it.  I still have not experienced any awful cravings or hunger, so I'm continuing with the 3 meals and 2 healthy-ish snacks approach since it seems to be effective.  I've really tried to focus on making meals and snacks from "real" foods instead of processed options.  Obviously it's easy to grab something like a Clif bar for a snack, but I find that I enjoy the snack a lot more if it's something I physically make (such as the oat patties) or something that's fresh like an orange with Greek yogurt.  The healthy snack vs treat part seems to have been key.  In the past I've used a night time snack as a "dessert", and I don't know, it just seems to make things worse as far as having cravings go.  I've tried my hardest to keep variety going too, which I feel has kept my interest and makes me have to think about things a little more.  Amazingly enough I've been pretty good about packing my food either the night before or early in the morning, which obviously helps.  I'm saying all of this shit like it's some rocket science no one else knows that I finally figured out, but obviously these are common sense approaches!!

I did have a few little mini splurges this weekend in the way of some wine tasting, and a cocktail party that one of my friends threw.  Even so, I tracked everything I ate and still managed to stay within my targets.  The key was planning ahead and having a more modest breakfast and lunch to allow for the splurging.  I am sort of doing the same thing today.  We are having corned beef, cabbage and potatoes (and one...ok TWO...Harps!) tonight, and since the beef is so salty and not great for you, I've had pretty low salt, high fiber meals so far today!   Although my Irish dinner is pretty high on fiber too, will ya look at this cabbage? 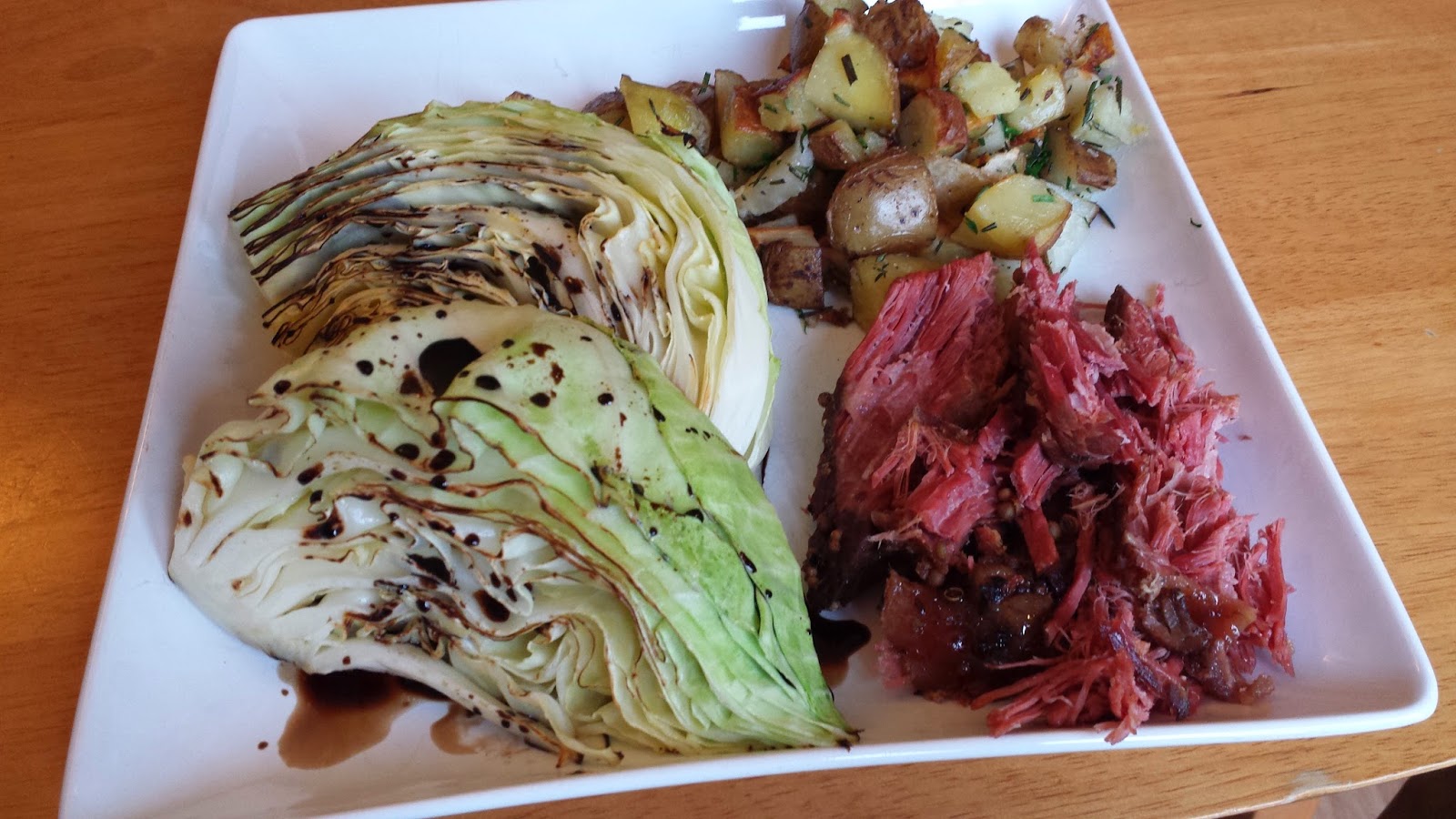 I used the recipe from Pioneer Woman where she keeps the cabbage in wedges, pan sears them, then throws them in the oven to steam.  There is also this balsamic syrup she makes with it that I also made, but wasn't quite as successful with.  It wasn't very syrupy at all, and I was scared if I reduced it any more that it was going to burn!  At least it tasted good.  And of course the corned beef was good, as well as the herbed potatoes, which are always my jam.

And for the record, Eric and I are still in love and giggly.  We just get giggly about annoying Molly by trying to take selfies with her. 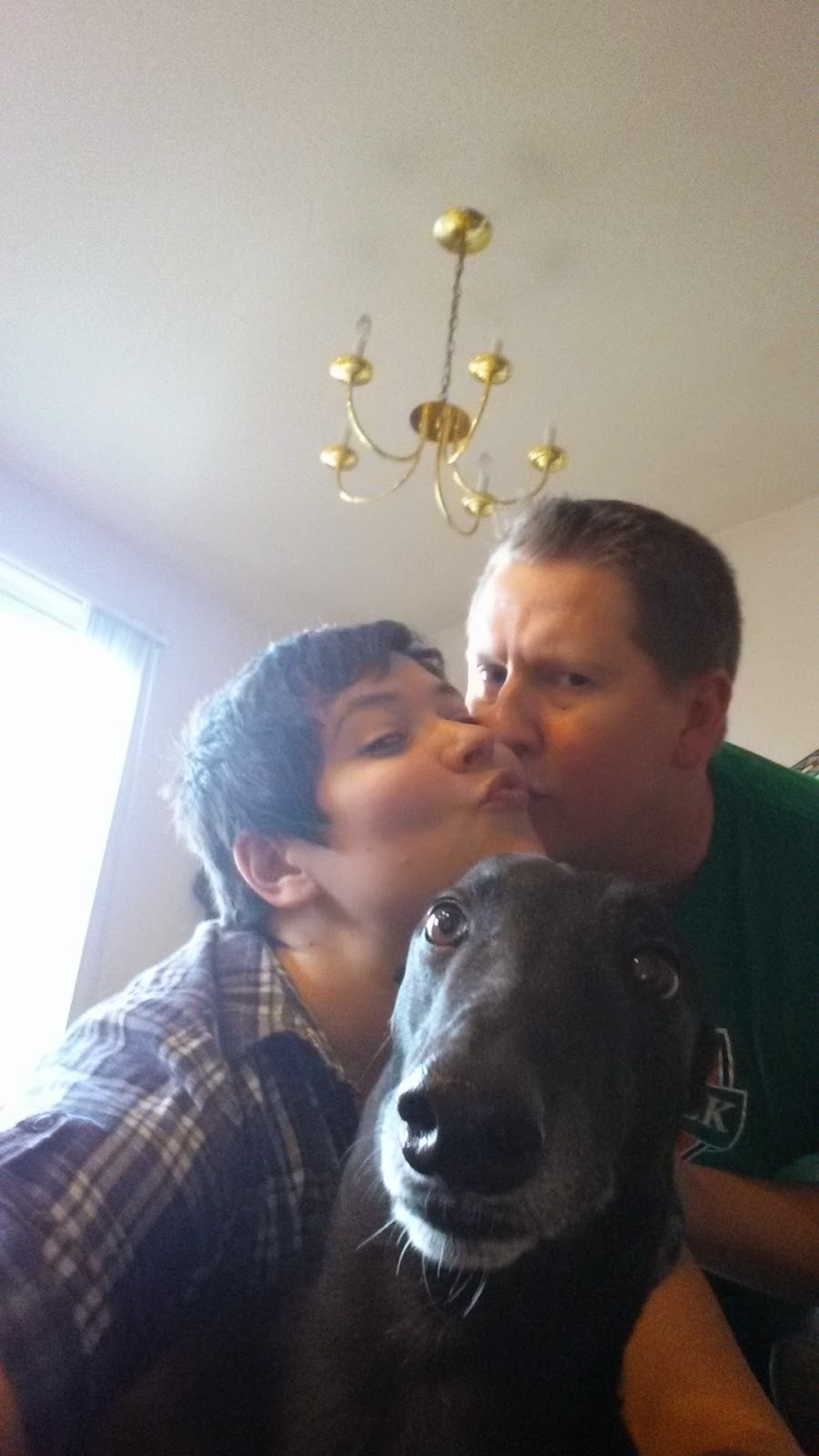 Posted by Runs To Get Waisted at 6:48 PM