People it is COLD here!!  Not East Coast cold, but we are in the low 20's and there is a bitterly icy wind blowing.  Naturally I decided that it would be a perfect time to go for a run, although I mainly decided to do so after watching the Biggest Loser finale.  I definitely wanted to talk about the finale, but since I will be talking about spoilers, I'll wait until the last paragraph.  If you haven't watched it yet and don't want to know anything (though I'm not sure how you escaped it), you have been warned!

I dressed in a comically unlike me amount of layers and drove out to the spot where I did a lot of my marathon training runs, and oh what a difference a few months makes.  I remember trudging mile after mile in the heat this summer, angry and sometimes crying over how hot and miserable I felt.  Well not today my friends!  I'm pretty sure I stepped out of the car and said in one breath "Oh this isn't that bad, oh shit it's cold!"  Even with two pairs of gloves on my fingers were SO cold!  I had put a thin layer of Vaseline on my cheeks and lips before I left the house, but even so my cheeks felt like they were on fire from the icy wind.  After a mile and a half I finally got to a "comfortable" state, and if I'm that cold, you know something is wrong.

It was a pretty satisfactory little 4 mile run, weather aside.  I did my first mile in sub 12:00, which definitely thrilled me.  I have not worked on speed in a really long time, and definitely feel like I have regressed when it comes to pace.  I can't remember the last time I did a mile in less than 12 minutes, and didn't realize how much that bothered me mentally until I looked at my Garmin and saw that I had the chance to run a sub 12 mile.  Overall I was satisfied with the run and was happy I propelled myself to get up and do it.  My knee did bother me during the run unfortunately and led to me walking more than I would have liked.  I am really hoping that BS works itself out soon. 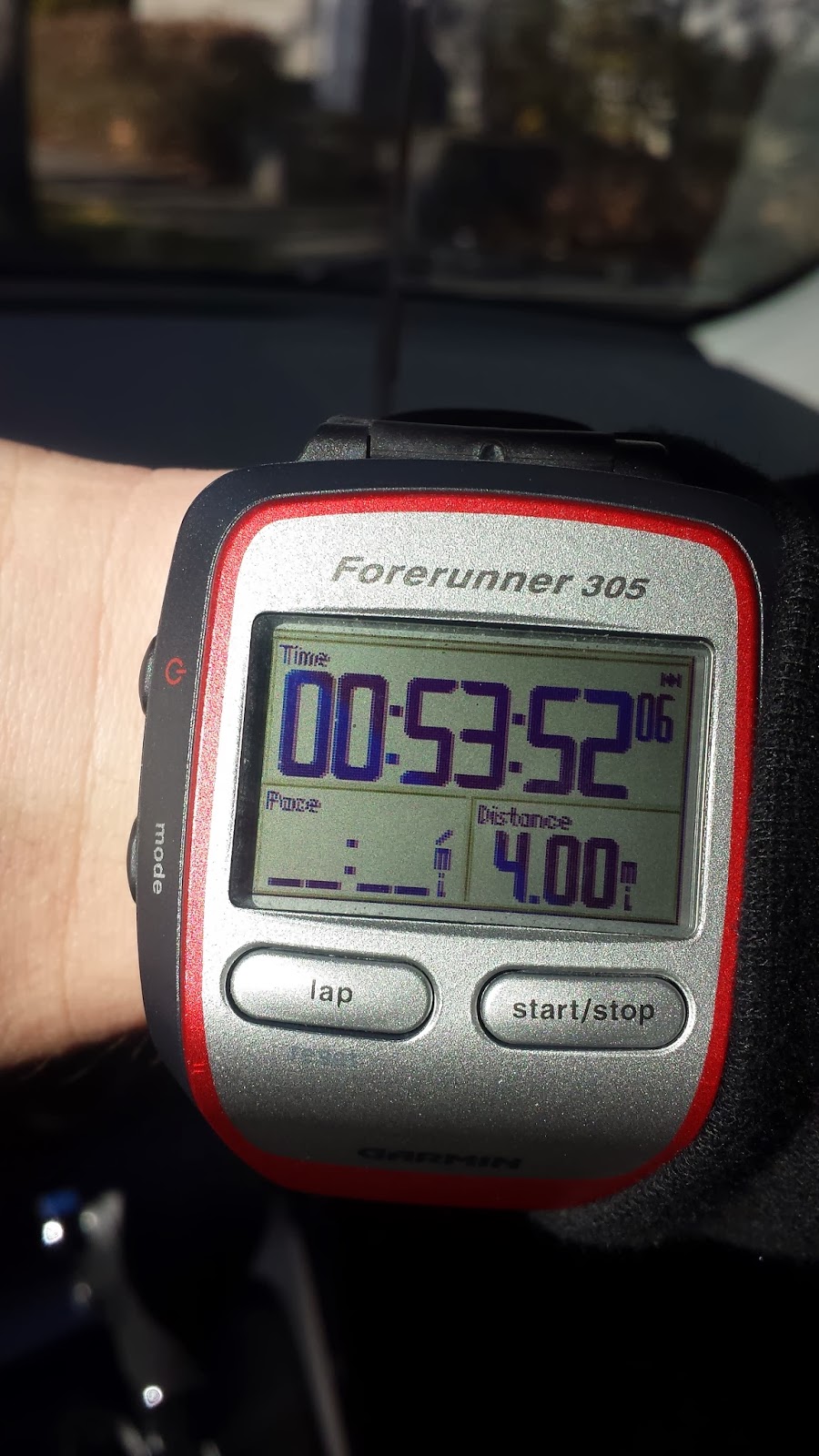 After my run I was craving a fresh salad like no one's business, so I got some stuff at the store and made a really amazing, huge salad that I wish I'd taken a picture of!  I used baby kale and arugula as the base, and topped it with hazelnuts, goat cheese, strawberries, pomelo and roasted turkey.  It looked so beautiful, tasted SO good and really hit the spot!  It's actually a nice segway to talk about one of my newest food obsessions (a healthy one for once!), the pomelo.  I am not sure if you guys have ever had one, I certainly hadn't ever tried one until earlier this week, but they are heavenly! 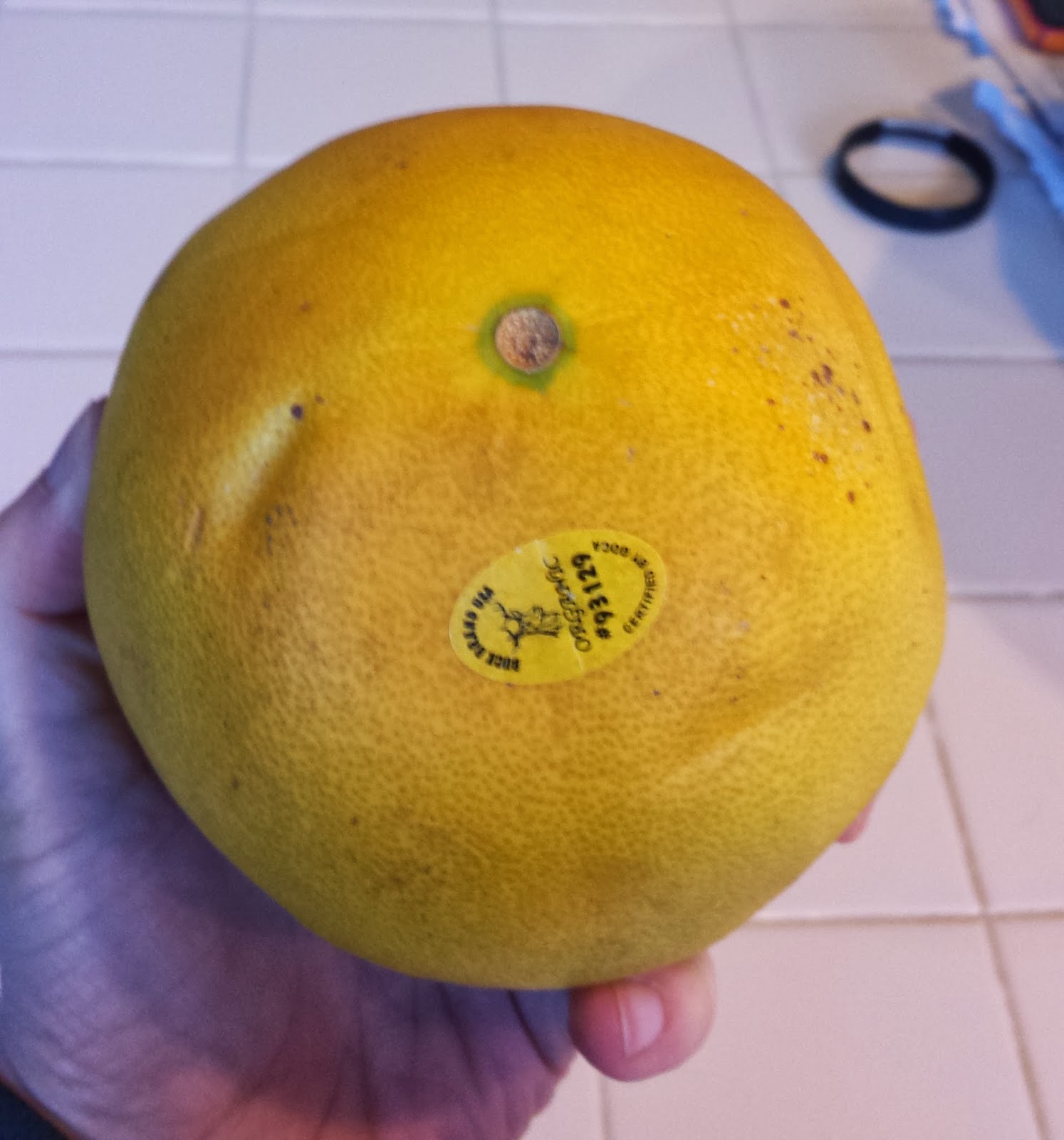 They look like a grapefruit, but are 10 times more awesome.  The skin has an incredibly beautiful floral scent to it, so much so that I could smell them from inside the grocery bag that was on the back seat.  I imagine the peel would make the best candied citrus peel ever!  The flesh itself is out of this world, and tastes like a cross between a ruby red grapefruit and a really sweet orange.  I am totally hooked!

My second obsession is an Australian brand of yogurt called Noosa.  I've only seen it in our foo-foo natural food store, and it's expensive as hell, but it is worth every single penny mainly because they have a passion fruit yogurt that sends me right up to Cloud 9.  I am a complete hussy for all things passion fruit, the taste of it is just ethereal and unlike anything else on the earth.  You don't see many passion fruit things around, which is why this yogurt is so exciting to me. 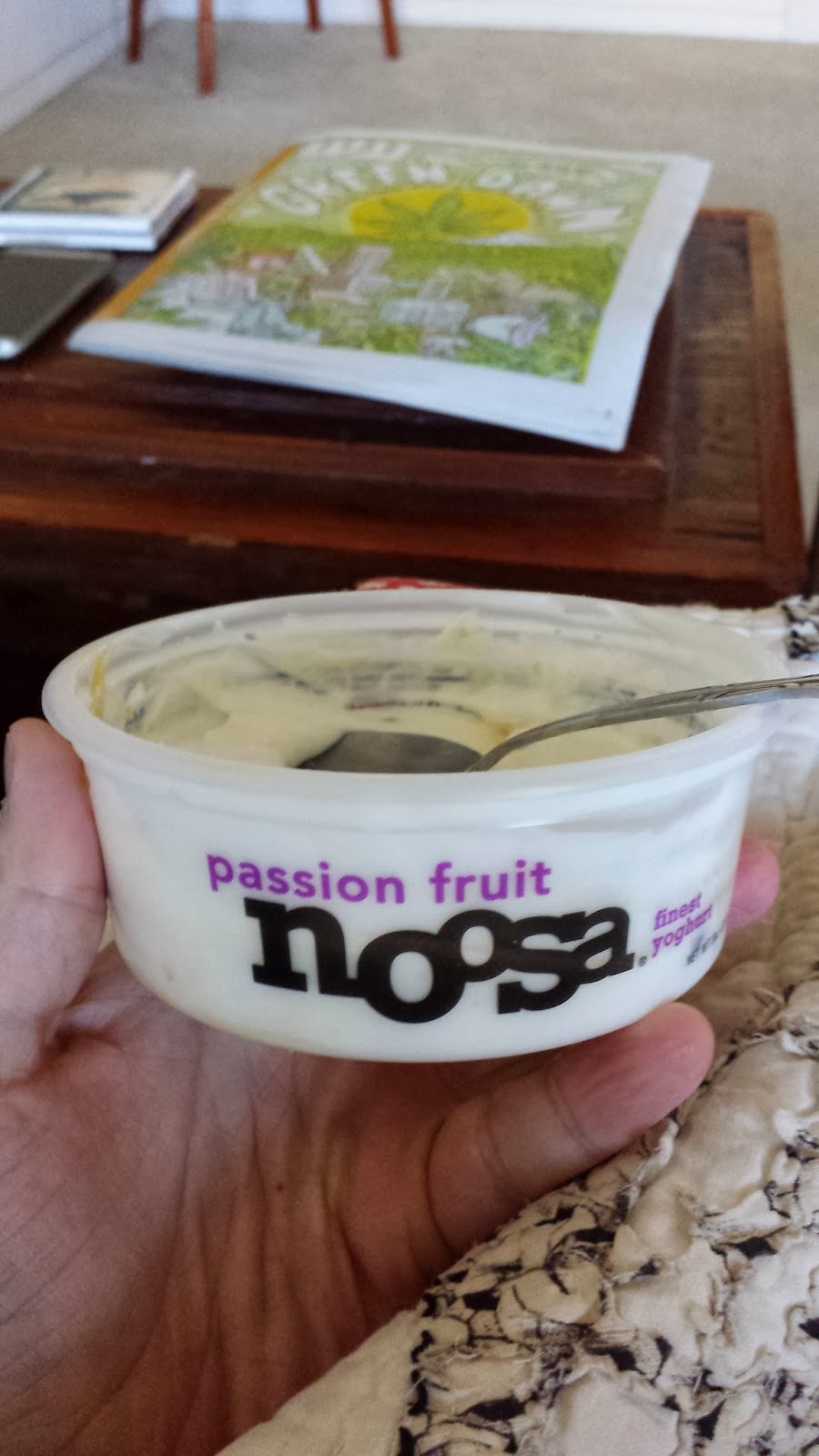 The yogurt itself is pretty stellar, and tastes/feels like a slightly less tart cheesecake.  Underneath the yogurt is a the best part...passion fruit puree, complete with crunchy seeds.  Every bite contains this creamy, sweet, ridiculous yogurt paired with tart and floral passion fruit.  It's pure heaven.  It's also not low calorie, one of those containers will cost you 270 calories and 11 grams of fat.  However, I think this works wonderfully as a dessert treat.  You get more bang for your nutritional buck than you would eating something like ice cream, and it's also a bigger serving than ice cream.  I mean ice cream is typically a half cup serving, which bitch PLEASE, who only eats a half cup of ice cream???  What I'm saying is, I'd way rather eat this because I get a little more, it has calcium, cultures and protein, OH and it's delicious!

And speaking of trampy broads who like delicious food, check out Molly when I was eating my yogurt.  First she thought that rolling on her back and giving me a cute look would result in her getting a bite of yogurt. 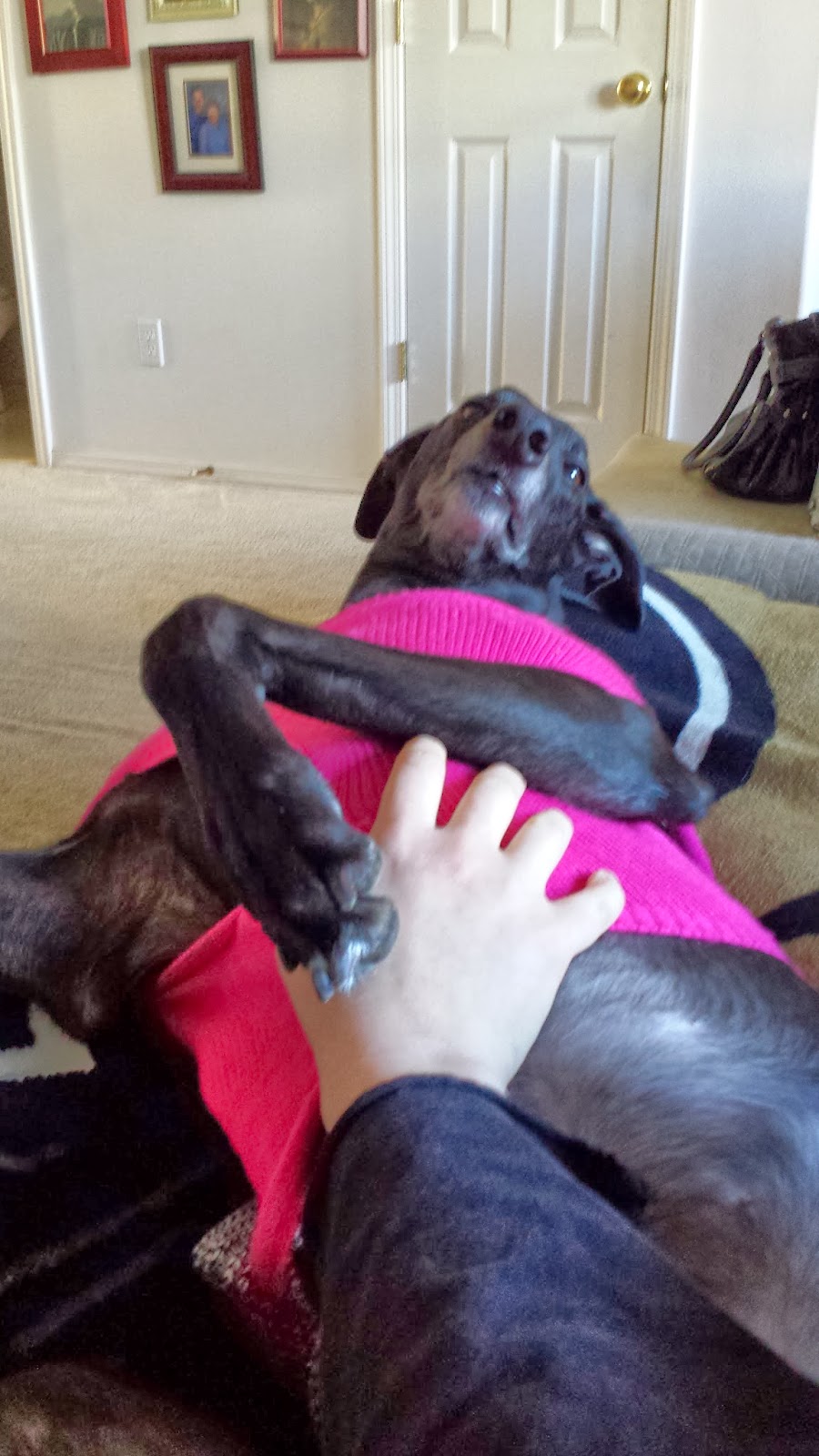 When that didn't work, her next tactic was to get super close to me and stare me down, all while making sad noises. 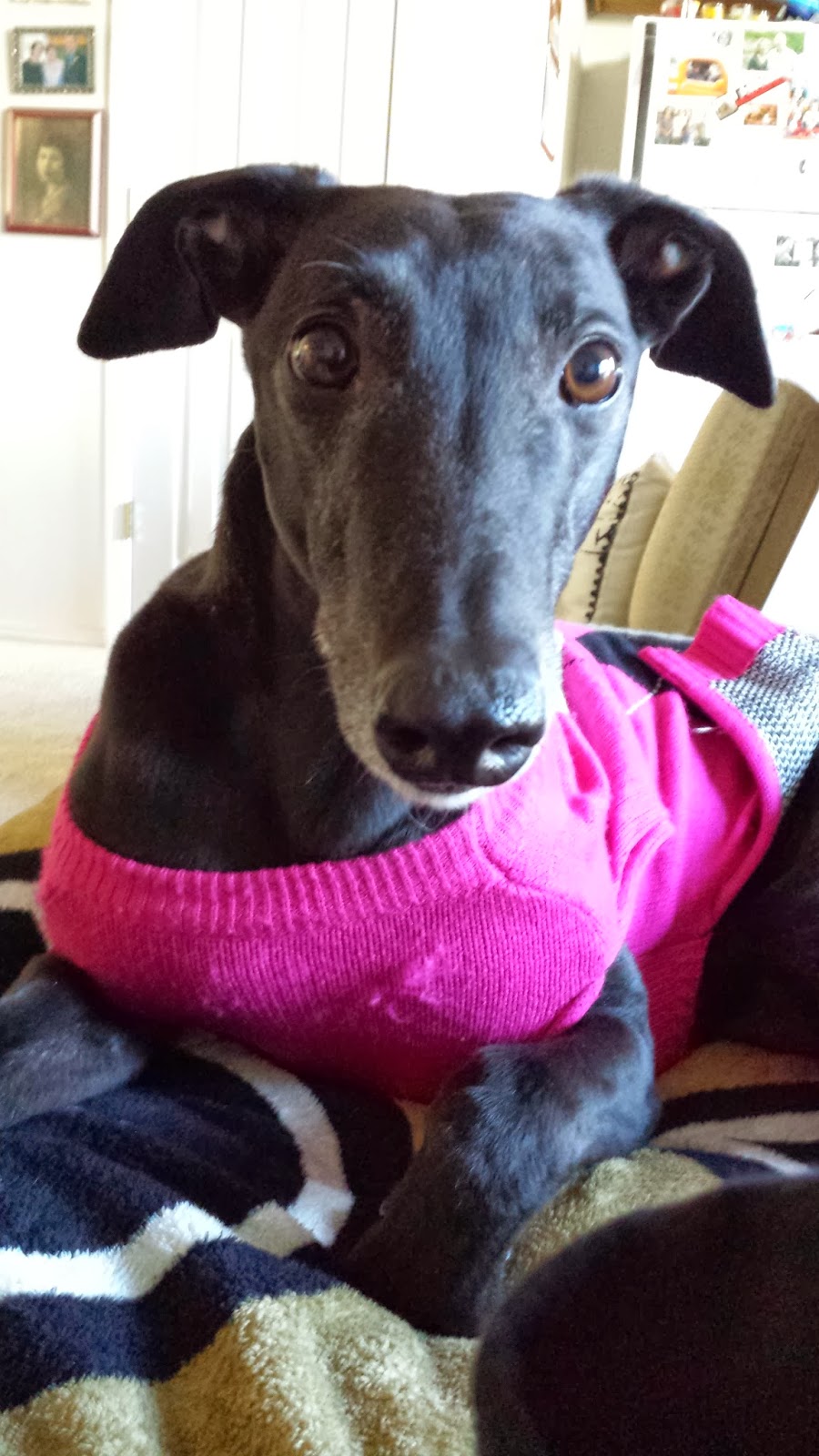 Oh Molly...I don't share my Noosa with anyone.  Go eat a dry dog treat and kindly piss off.  She is cute though right?  ;)

Ok, so time for some Biggest Loser chat....if you want to hop off here to avoid spoilers, go for it.

So I logged onto the computer this morning and since I hadn't had coffee quite yet, I'd forgotten that the Biggest Loser finale aired last night.  However the good old Internet stepped in to remind me, and I won't mention the name of the asshole homepage that spoiled the result of the BL for me, but it was right there on the front page in a headline with no spoiler alert.  I mean really, in the year 2014 a website doesn't know to not spoil a finale in the freaking headline??  I was definitely peeved about it being spoiled, even though I was pretty positive by about the third episode that they'd rigged it for Rachel to win, and I was right.  I've watched BL for years, and it's pretty obvious early on with the way that they edit the show who is going to win.  Anyway, I figured what the hell, might as well check on Facebook to see more details, and went on the BL Facebook page.  I was surprised first of all that they didn't have a post congratulating Rachel on her win, and then I started seeing a ton of comments about how disturbed people were about the finale and how Rachel looked.  There was so much blowback that I finally had to watch the finale on my DVR.

Wow.  I want to be careful here, because I really hate when women are cruel to other women, especially when it concerns their looks.  Rachel is a real person, who I don't know at all, and she could theoretically stumble across this blog some day.  I would feel terrible if I made someone feel bad about themselves, because Lord knows enough bitches made me feel bad about myself when I was younger, and I don't want to put that kind of karma back into the universe.  Having said that, my reaction was similar to the majority of the internet's today.  When she walked out I was completely in shock, followed by complete sadness.  I am certainly not an expert, a doctor or a trainer, but I simply couldn't imagine that she is at a weight that is healthy.  Again, I am no expert at all, I just know that Rachel's appearance immediately made me uncomfortable.  I wasn't uncomfortable because I am a chubster who hates thin, beautiful women.  I am more than happy to give a hot woman her due.  I was uncomfortable because she looked weak and frail, and because she is now being used as a "thinspiration" on pro-anorexia sites.  Don't believe me?  Do a quick internet search.  I am certainly not saying Rachel has an ED, because I don't know her or her weight loss methods from Adam.  I think more than likely she got overzealous in her need to win and be competitive.  But she is definitely being put on a pedestal by those who are anorexic, which I think says volumes and is also massively troubling.

Being a woman in your 20's sucks.  It's a super confusing time and you're still figuring out so much stuff about yourself.  It's easy to fall into the trap of trying to please others come hell or high water, or get into a mode of having to look or dress a certain way to please the world.  You believe a lot of the hype from the entertainment industry and fashion magazines about what constitutes as beautiful.  I was so thankful to turn 30 and have my "oh wait, I don't give a damn what you think" gene kick in.  Rachel is 24, so I can certainly understand the pressure, especially if $250k is at stake.  Whatever the truth is, I certainly wish her well, and hope that now that the competition is over that she can maintain her weight loss plus 10 pounds.  She is a pretty girl, a talented athlete and seems very intelligent as well, so I can only hope that there isn't something more sinister going on and that she'll dial whatever she's doing back a little.  Life is too short.

I am definitely throwing major shade at Biggest Loser in all of this.  The show used to be super inspirational, but like most reality shows it's become bloated and ridiculous with all of the staged dramas, product placement and game play.  The product placement especially irks the hell out of me, since most of the products they promote are processed crap.  But this is a new low, and I have the feeling that they will have to make some major adjustments after this.  It's pretty telling to me that they have posted nothing to their Facebook page about Rachel even winning, much less anything addressing the controversy.  I guess time will tell on that.

Anyway, sorry to have rambled so long about it!
Posted by Runs To Get Waisted at 4:54 PM