Well, it doesn't look like I am going to make my 350 mile goal for the year, which really bums me out.  I ended up getting super sick right after I decided to go for 350, which I swear to God always seems to happen right after I make a goal.  Either that or work springs some kind of horrid project, trip or utter nonsense on me.  It's really so discouraging and makes me want to never want to strive towards a goal, much less voice it aloud, because life seems to like to swoop in and shit on it as soon as I voice it.  I know that is a terrible attitude, I'll get over it, but it's kind of the truth.

What did happen today that was a little more positive was that I hit 300 miles for this year.  I ran for the first time since getting sick (and I'm still coughing up grossness after 2 weeks!), and just went out and did a short 4 mile run.  It wasn't my fastest time (more on that in a moment), but it didn't feel horrible at least.  Anyway, my short little jaunt put me at 300 miles!  It's definitely an okay consolation prize, even though I didn't keep very good records in 2012, I for sure didn't run 300 miles in one year!  I am going to try to squeeze in some miles before we leave for Los Angeles, but I am going to do my best to get some more miles added to my tally. 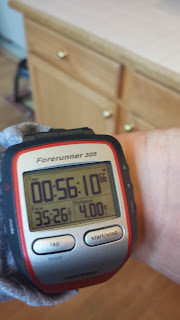 So okay, about the slow time.  Obviously I've never exactly been Jesse Owens when it comes to my running speed, but today I got handicapped by unleashed dogs.  I hope I don't hurt anyone's feelings here, but I'm just going to say it.  If you have your dog unleashed in public, you're an asshole.  I don't care if your dog is friendly, I don't care if Ceasar Milan trained your dog personally, I just don't care.  You guys know that I'm totally dog crazy, I HAVE a dog and I adore dogs of every shape and size, but when I am running I want to feel safe.  My greyhound is the friendliest dog on Earth, but she is also a complete gomer, and she stays leashed in public at all times with a REAL leash and not one of those bullshit retractable leashes.  I already have to deal with living in a kinda trashy neighborhood with an insanely busy highway (where a couple of people have been hit and killed because a tweaker rammed their car up on the sidewalk), as well as deal with idiots who text and drive, who turn into crosswalks without looking, and people who blow a giant cloud of cigarette smoke right into my path (I am allergic).  The last thing I need to deal with is your dog running at me, causing me to have to stop and stand still until I determine if it's safe to move.

Today there were 3 unleashed dogs on the same street, and it frustrated me immensely.  The first one was this mean looking lab who was staring me down while he and his owner were taking a walk down the street.  I tried to not make eye contact with it, and of course I slowed down to a very slow walk so that I wouldn't look like a fun target.  I am pretty good at gauging whether a dog is friendly or not, and this dog definitely wasn't.  So I get through that boondoggle and then further up the street was the same blue heeler who ran at me a few months ago, unleashed of course.  I slowed down again because I knew for a fact the dog was mean.  Fortunately he stayed with his owner even though he stared me down pretty hard, and I was walking pretty slowly so that it didn't get any ideas.  So I start jogging again, and not 30 feet up the fucking street was ANOTHER unleashed dog.  This time it was a little Pom, but little yappy dogs usually are the most likely to nip.  This time it started running towards me and following me.  I stopped dead in the street, and his owner was having a conversation with his neighbor and was completely oblivious to the whole thing.  It's one of those situations where you wish for a brief second that a car would mow down the dog and teach the owner a valuable lesson.  Again, I love dogs, I certainly would never want to see one hurt, but if you truly love your dog you won't let it run in the street.  The guy finally turned around and was like "Oh you've made a friend."  I grappled between saying "My friend is completely fucking my running pace", or "my friend is going to be a pancake in the street if you don't keep it leashed up."  I said neither one and just continued walking.  So between all of that, I wasted about 7 minutes, which really made me mad.  It's the type of thing that makes me hate where I live, because I wish I just lived in a quiet, tweaker free place that had sidewalks, and people with a small nugget of common sense.

On to happier things, I cannot believe Christmas is almost here!  I have 98% of my shopping done, and just need to get a few more stocking stuffers for people.  My aunt and I were joking that the family pets have more presents than the rest of us do!  I can attest that Molly is a spoiled turd who has a jam packed stocking  from us AND a wrapped present under the tree from my parents.  We got some pretty cool stuff for my aunt's cats that I am excited to give them.

On Christmas Eve we will be doing our traditional church service with my aunt and uncle and my uncle's parents, followed by shrimp gumbo at my aunt's house.  The gumbo dinner is a nice tradition, in fact I think we've been doing it the last 7 years or so?  Then we all open presents and take family pictures.  And for Christmas day Eric and I will be doing our traditional prime rib dinner with just the two of us, and we'll open our presents to each other.  We'll also watch our traditional Christmas day movies, which include Will Vinton's Claymation Christmas and SNL's Best of Eddie Murphy.  The Eddie Murphy thing got started because my aunt gave me a bunch of the "Best of SNL" DVDs for Christmas in 2006.  Eric and I were still dating and were in fact just freshly engaged!  I don't know if anyone remembers, but James Brown died on Christmas Day of that year, so in "tribute" we pulled out the Eddie Murphy DVD in order to watch the "James Brown Celebrity Hot Tub" skit, and then got sucked into the rest of the skits because they are hilarious.  Every Christmas Day since then, we have watched that DVD on Christmas morning.  The Claymation Christmas got added in later on after my brother gave it to me as a gift, it was our very favorite Christmas thing to watch when we were little, probably because I was apeshit about the California Raisins as a kid!  It really is the coolest and most underrated  Christmas thing, I included a clip from it below of "We Three Kings".  The music from it is awesome, and I love the camels.  :)

Well, I will leave you with something that is sort of Christmas related, a picture of Molly harassing me when I was trying to wrap presents.  She hates having her picture taken, so I started doing selfies of us just to annoy her and get her away from me.  And the angle of the shot is sort of unfortunate, let me put it this way, I DO have a shirt on.  It's a tank top so it's hard to see, lol. 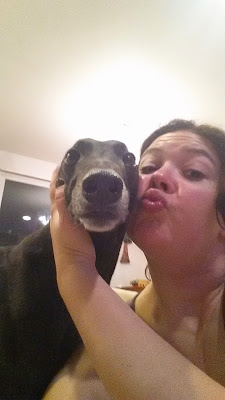 Posted by Runs To Get Waisted at 1:11 PM