Good lord, am I EVER overdue on this recap.  When I was in San Francisco, my hotel charged $12 for internet per day, and there was no way my cheap ass was paying that much just to use the internet, and then when I got back into town, our week was so busy that I didn't have time to sit down and thoughtfully write out the kind of post I wanted to write.  So, here we are a week later.  I'd planned to kind of do a 3 part thing and include a ton of pictures and stories about the other crap we did, but I'm just going to keep it to this one blog post since I need to slay the dragon and just get it done.  I'll probably do a little "outtake" post with all of the pictures and stuff I didn't post here.  For now, I'll post just about the race.

The Nike Women's Half Marathon is the biggest race I've ever run when it came to the number of participants.  The only thing that has ever come close was the Shamrock Run here in Portland, which I think had about 32,000 runners, but the NWHM was almost 40,000!

The race had an agonizingly early start of 6:30 am, and TNT required that we meet up in the hotel lobby at 5:15 (!!!), so I was up at 4:30 am.  I was a bit irritated because there was no good reason for us to really meet that early since it was just typical TNT nonsense of standing in circles talking about being purple warriors, passing out buttons to wear at the race, talking a million pictures, crying and lecturing everyone about eating enough salt.  Everyone was super peppy too and all up in each other's faces, which that early in the morning and no coffee is just not for me.  I am always pretty quiet before a race because I have a ton of adrenaline, even if it's something simple like a 5k, so I was a tiny bit miserable having to fake sunshine and flowers at that hour.  So much more to the whole TNT thing that I'll get into at a later date.

Finally at 6 am we walked the 3 blocks or so over to our corrals.  I finally took my chance to break free of the group and worm my way into the middle of my corral so that I could be in my own headspace and quietly prepare to run the thing, but of course a group of TNT people somehow found me and were blabbing to me non-stop and asking me a ton of questions.  *sigh*  I just resigned myself to not being able to have a moment's peace until the race actually started.

To give you an idea of how many people were in the race, the start time was 6:30 am, but I didn't cross over the start like until 7 am.  I know the picture is blurry and you may not be able to tell, but there is a faint blue strip WAY in the front center of the picture, and that's the start line.  That should give you some perspective of how far back I was.  There were still like 3 or 4 blocks worth of people behind me! 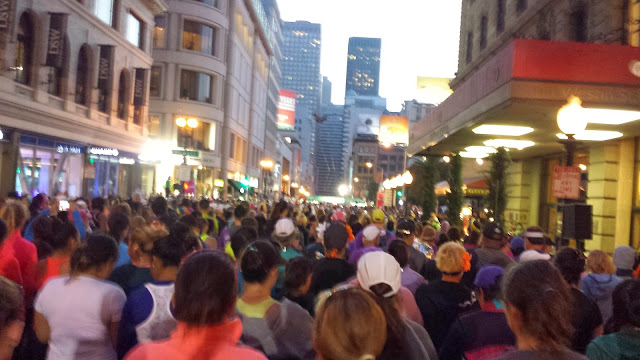 If you love San Francisco, the route for the NWHM is super cool.  We ran right past Fisherman's Warf, which is one of my favorite things, as well as Alcatraz Landing.  I probably would have had a better finishing time on the race, but I stopped and took a million pictures along the way, and it was all worth it. 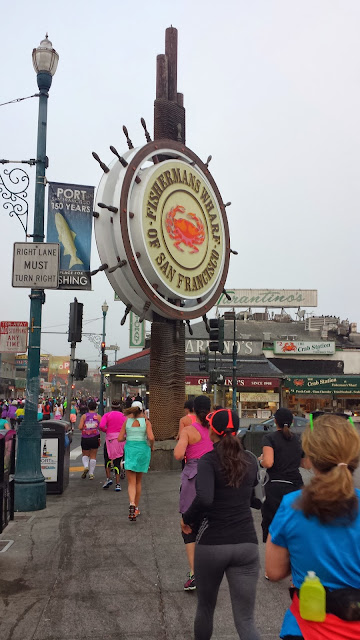 For the first five miles, the race was so insanely crowded that I couldn't even move my arms that much without hitting someone.  I was also getting annoyed with people who were walking and blocking the way of the runners.  I obviously support anyone who wants to sign up for a race, but if you feel like you will need to walk most of it, then the rules of the road apply...slower traffic to the right!  I was doing some crazy dodging and passing moves, all while trying to make sure I didn't eat it on the uneven pavement.  I kind of wish I'd lied and stated a faster time to get in a corral that had a bigger ratio of runners, which is a complete "note to self" if I ever do a bigger race again.

The one thing I didn't even really think of until I was in the race was "oh yeah, San Francisco has big ass hills!"  I'd had a couple of locals tell me the course was flat, which would be like me telling an out of towner that Portland's obsession with bacon, beer and hipsters is on the minor end of the scale.  (in other words, all lies!!)  When we hit our first hill, I was cursing every person who'd called the course flat, because it was brutal.  EVERYONE stopped to walk at that point.  In a crazy way though, I do feel like it took pressure off areas of my legs that normally get worked out too much.  Here is a picture of the biggest hill (and my alien thumb), which just got foggier and steeper the higher up we got. 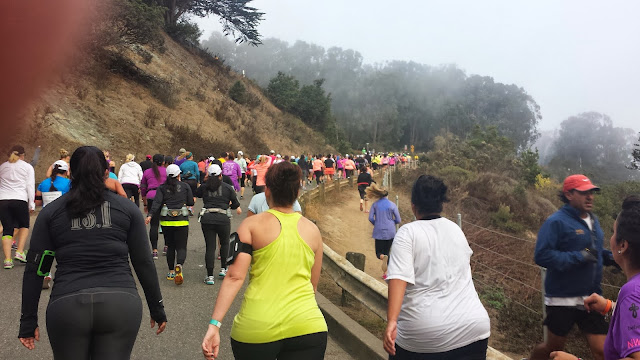 Despite the hills I have to say, my energy levels and body treated me right during the race.  There was never a point where I felt bummed out, stressed, tired or even that winded.  I had Gu in my pack, but it actually hurt my stomach the first time I took it, so I cautiously took some Cliff Bloks at one of the aid stations.  I felt great after I ate them!!  Usually Bloks hurt my stomach and make me feel sick, but for whatever reason they went over well during the race.  I think the trick was that I would eat one, then wait until at least another 0.75 to eat another one, but who knows.  I was pretty happy that I took enough Bloks with me to squirrel away in my bag for the remainder of the race.

The aid stations were pretty decent, though at many of them they were running out of water, and all of them were crazy disorganized.  I can't really fault them though, having to keep up with that many people.  There was also Nuun at every station, which I had trained with and was used to, so that was just fine on my stomach.

The spectators at this race were pretty decent, but definitely not as good as Portland.  There were some pretty funny signs around that I wish I'd taken pictures of, but I DID capture a picture of another runner's shirt that made me burst out laughing. 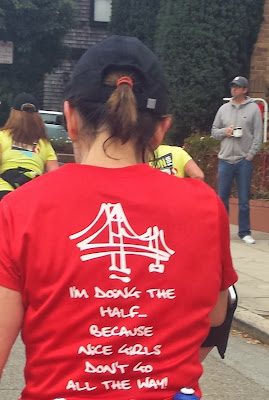 Such a cute shirt, even though I guess that means I'm not a nice girl, since I did go all the way in Portland!  ;)

All of a sudden (or so it felt like), I was at mile 11, and realized that I was almost done.  I believe my exact thoughts were like "hell, why didn't I just do a half marathon in the first place?!?!"  I guess the trick to having a pretty easy half is to run a full marathon a couple weeks before!  Thankfully the rest of the route was downhill, so I ran for the remainder of the race.  The next thing I knew, I crossed the finish line and ran towards a tuxedo'd fireman holding a Tiffany box!  Grabbing that box was totally thrilling, since I've never owned a Tiffany anything in my life, and since I knew it was going to be a one of a kind necklace. 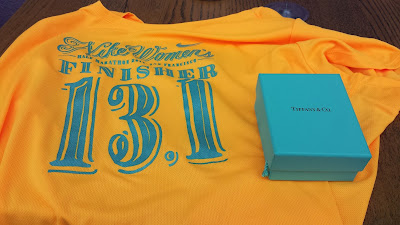 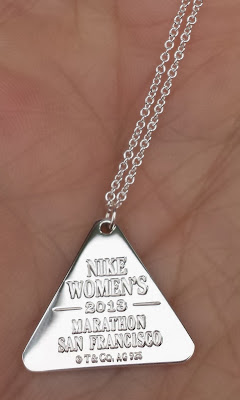 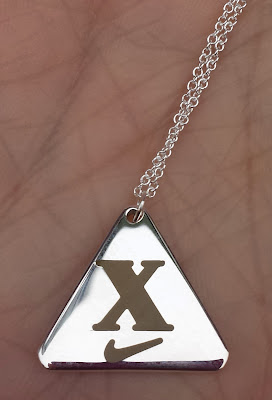 So that's the necklace, which I LOVE.  The "X" is since it's the 10th year of the Nike Women's Marathon/Half Marathon, but I most love the side that just has the simple engraving on it, which is the side I wear it on.  I am so proud of it, and still so in awe that I own a Tiffany necklace!

My finish time was 3 hours and 22 minutes, although I think I could have done a sub three if I hadn't fiddle farted around and stopped for pictures so often.  I also had to wait in a really long porta-potty line, which easily was a 10 minute deal.  I'm still pretty happy with that though.

Afterwards Eric and his friend Oliver took me to a local cafe for a victory brunch.  I had quite possibly the best chicken and waffles ever, as well as a really amazing cup of coffee! 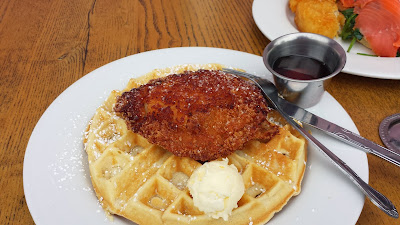 I know all of that wasn't the most detailed recap of every little thing that happened during the race, but at least you guys know I survived now!  I can also happily report that the race was such a positive experience and so much fun that it completely revived my love of running!  I know I'd told you guys that after this race that I was going to retire from running for a little bit and well...that's kind of a big old lie!  I not only am going to continue running, but I am already signed up for three races!  Two of them are local races and will be in November, and I have yet another destination race in January that I will be telling you about in the next blog post.  All I'll say for now is that I'm pretty excited about it, but it's not a full marathon!  I haven't changed my mind about not wanting to do another one of those!
Posted by Runs To Get Waisted at 6:14 PM