Today has been amazing, and it's not even 2 pm!  It's the first Saturday in I can't remember when where I did exactly what I wanted, when I wanted.

My week at work was still not great, but I think is about to get better.  I even managed to have a productive day yesterday where I got every single thing done that I intended to get done, without a ton of interruptions and drama.  Again, couldn't tell you the last time that happened.  It was the perfect way to start off our Friday night, and we decided to be spontaneous and go to Trader Vic's and get ridiculous on Mai Tai's.  I normally hate Mai Tai's because they are too sweet, but the ones at Trader Vic's are just sweet enough and taste fantastic.  They are also SUPER strong, so we were both pretty happy by the time we left.  We went over to a record store that we really like, and just dug through CD's for awhile.  My favorite thing is digging through the "skuff bin", (their spelling, not mine) where the CDs are gently used and supposedly scuffed up.  I haven't had an issue with any CD I've bought from it yet though.  The best part is that the CDs range from $0.95 to $1.95.  You can't really beat that.  You have to dig through a lot of crap, but you often find a treasure in there.

We both ended up getting about 5 CDs each, then going home and relaxing.  I'd already decided my run day was going to be Sunday since the weather is supposed to be better (and by better I mean 70s and raining!), so I boasted that I was totally going to sleep in.  But do you think I slept in?  For some reason on the weekends I pop wide awake at 5 am and cannot fall back asleep, yet on the weekdays I almost sleep through the alarm clock and can barely drag myself out of bed!  I lay there until about 5:30, then got up and watched the America's Next Top Model episode from last night I'd taped in secret shame.  Once Eric got up we had coffee, I made pancakes, and we just totally chilled and eased into the morning.

Then I did something I've been wanting to do for awhile, which is spend several hours working in the yard.  I am very passionate about gardening and LOVE to do it.  It's completely cathartic for me to go out and work with my flowers/vegetable beds.  Unfortunately between our insane schedule and the crappy hot weather for the past few months, I have totally neglected the yard.  My tomatoes were totally wild, my kiwi vines were out of control, and my roses desperately needed to be trimmed.

The sky was cloudy this morning and it wasn't hot at all, so it was the perfect chance to get out there and clean up the yard and get the garden ready for fall.  I brought Molly's bed with me so that she could lay outside and watch me.  Here is a picture of her "helping" me: 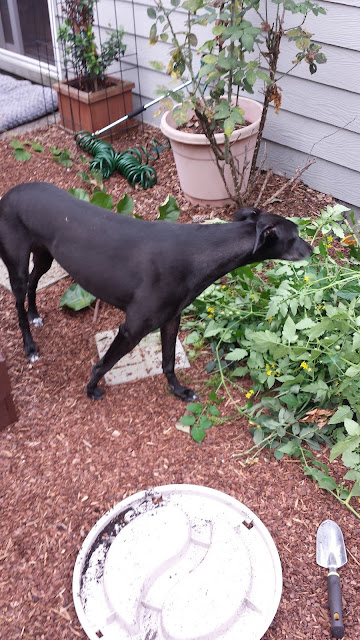 She really wanted to eat every tomato she could possibly find.  I let her have a couple of little cherry tomatoes, but then had to shoo her away!  The dog is like a garbage disposal, so we have to watch her closely to make sure she doesn't eat something she's not supposed to.

I got SO much accomplished.  I pulled up all of my tomato plants, trimmed my roses and the kiwi, got my composters cleaned up and pulled up a bunch of weeds.  I also replanted my 3 apple trees into the garden boxes, which was quite the project.  I'd decided a few months back that when fall came around, I was going to do this instead of fooling with a veggie garden every year.  I had 3 separate apple trees in pots, and while they did ok, they definitely needed to be in a more permanent home.  I was so pleased when I finally got done.  The yard looks clean, simple and uncluttered, which is frankly a metaphor for what I've been needing and wanting with my life lately.  I definitely felt good and like I did something that needed to be done.

The other thing I did that made perversely happy was kill some yellow jackets.  We've had a big problem with them this summer, and have been finding them in the house almost daily for the last three months.  We were worried that there might be a nest in the wall somewhere, but I think it's actually in a weird cranny at the outside of the house and they are somehow finding their way in through a window.  All I know is that they really piss me off, and I usually have a live and let live attitude with insects (unless it's a roach, then bring on the chemical warfare).  Last Sunday after that horrible weekend I had, a yellow jacket flew in the house when I went to let Molly outside to potty, and flew straight on top of my foot and stung me unprovoked.  Oh man it made me mad, especially since it was not only such a crappy weekend already, but it stung me on my hurt foot.  Since then I have been on the warpath about the yellow jackets.

As soon as I got the yard cleaned up, I rebaited the yellow jacket trap we had outside because I saw some flying around the yard.  Instead of going to the trap, the dummies were just flying around near the ground.  I got a broom and went She-ra on their asses, and killed all 3 that were flying around.  After I wacked them, I used the garden sheers to cut them in half.  Totally gross and sociopathic, but it made me feel avenged after being stung last week!  I wish I could find out where the nest is so that I could eradicate them.

After my yellow jacket murder spree, I got all cleaned up, and now I plan to do a whole lot of nothing for the rest of the day.  I plan to relax, get really hydrated, and have a great run tomorrow.  Well, as great as 18 miles can be right?  I will post a recap after my run, as always.  Wish me luck!
Posted by Runs To Get Waisted at 2:29 PM