Sunday was the biggest of big training days and my final big training run, a whopping 20 miles, and I apologize for not writing my recap yesterday.  But as you can imagine, I desperately needed to stretch out and rest after my run, so I figured you guys wouldn't mind waiting too much!

Before I get into all of that mess, I would like to take a moment to thank one of my blog readers and a self described lurker.  Even though I have the donation widget at the top of my page, I certainly never thought or expected that I would have a reader donate to my LLS fundraising goal for the Nike Women's Half.  The fact that anyone reads this blog besides my family and a handful of friends is amazing to me, and it is certainly reward enough.  For you guys to take the time to read about my crazy life, my complaining and my half assed training blows my mind already, so I was touched to see someone donated to me.  I am not sure which one of you did it, but thank you, thank you!!

So back to the business of recapping.  Sunday marked 2 weeks until my marathon, which is a relief and terrifying at the same time.  I am so exhausted with the whole process that getting it over with will be a weight off of my shoulders.  I will be completely honest, I woke up on Sunday with a lot of resentment because I am a giant, lazy baby.  I resented that I couldn't sleep late.  I resented that I was having to choke down a lackluster Cliff bar breakfast instead of the giant stack of pancakes I wanted to.  I resented that I was going to miss tons of football.  I resented that I hurt constantly, and I do mean constantly.  I dragged around until about 7:30, when I finally pulled all of my running clothes on and started packing my stuff up.

I decided rather spontaneously that I was going to run in a nicer area of town instead of by my house.  For one, it's safer both on a people and a traffic level, and it's quieter.  Last week's episode with those two snarling dogs really kind of put me on edge, and I just couldn't really go there considering I had enough crap mentally going on as it was.  The last thing I need is some asshat thug's pitbull to break through a fence and bite me.  Anyway, I needed a change of scenery and figured it would be good to shake things up.

I ended up doing five 4 mile loops, and things started out pretty rough.  Since I didn't start out the run in a good mental space, the first loop was absolute torture.  I actually texted Eric and told him I wanted to quit so bad.  I felt like I couldn't breathe, even though I knew that was all in my head, and I felt like I didn't have a smidge of energy.  Of course Eric texted me back and was like, just do your best, go as far as you can.  I started out the second loop and was trying super hard to find a reason to quit, but I had told everyone and their dad pretty much that I was doing this run.  Even my parents texted me that morning and told me good luck.  All of my friends knew.  You guys of course knew.  I was like, how lame would I look if I did some sissy 8 mile run when I was supposed to do 20?  Moreover, how could I go into this marathon without completing a 20 mile run?  Even then I was like, I could lie and say my foot felt so bad that I had to stop.  Which, that's not really a lie that my foot hurts, but I always manage to power through it.  Then I remembered my kind blog lurker who donated to my LLS fund, and was like, some stranger cared enough to donate to me based on me running.  How could I wuss out and lie on top of it?  So I kept going.

Things got better after that.  After every loop I stopped at my car and had some tech food and Nuun from my thermos.  And by the way, I forgot to mention the most important part of my run, which is that for the first 16 miles I had PERFECT weather.  It was about 57, the wind was insane, and it was completely cloudy.  It was like having my own personal wind machine blowing on me and cooling me off the whole time.  Of course the bad thing is that it made me more sad I wasn't snuggled on my couch watching football!  :P

On my second to last loop I had a crazy thing happen, which is that I had the fastest splits of my entire run.  There were points I was sprinting (or what this fat girl considers a sprint) and running at 8:45 - 9:30 pacing.  It definitely was a boost to my confidence that my legs had a decent amount of kick in miles 13-16, and even into mile 17 for that matter.  Unfortunately that was about where the kick ended.  The last loop was pretty brutal, not only because I was in a lot of pain, but because it started raining hard core.  I don't mind running in the rain, but after a point it is like water torture.  I became resentful again.  I was cold, wet, hungry, and grouchier than ever about missing the Saints game and the start of the Bills game.  My hips hurt, my calves were starting to protest, and my foot hurt.  I tried my best to still jog during my last mile, but my legs just didn't have it in them anymore.  I have never heard a sweeter sound than my Garmin beeping when I hit 20 miles.  The angels sang.  Slash played a guitar solo off in the distance.  An opera singer hit her finest note.  A Pegasus flapped its wings.  I'm pretty sure all of that happened, that or I was so hungry that I was delusional. 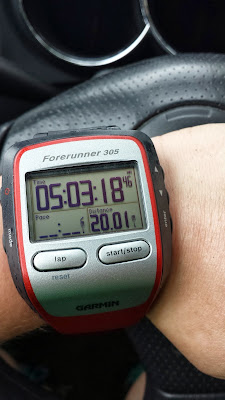 My time was interesting and I actually feel positive about it..  I did some figuring, and I feel like I could do the marathon in 6 hours, or worst case, 6.5 hours.  I feel like I will gain speed on marathon day due to race excitement and weird competitive shit with wanting to keep up with others.  I think my last 6 miles will be totally brutal, but I do feel like I can do it and that it will be ok.

I spent the rest of the day on the couch (I kicked Molly off so that I could stretch out, and she was majorly PO'd). 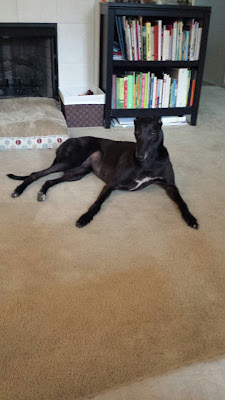 Eric was kind enough to get me the most glorious cheeseburger from one of my favorite places, which I ate in about a minute.  The Bills lost, I dozed, and then I watched Breaking Bad.  (only one more episode!!!!) I feel ok today, although my foot is pretty sore.  I am definitely concerned about it, and just hope that my body holds it together for 2 more weeks.  Other than that, I feel pretty decent, or about as decent as you'd expect one to feel after running 20 miles!!  I can't believe the end of this is so near, it really does blow my mind.

I am going to leave you with an amazing picture of Molly, which I took after I felt rested enough and she finally got to jump back up on the couch.  We were in the middle of watching Breaking Bad when I looked over and saw this: 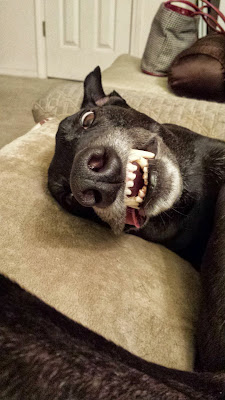 I know, she is such an elegant creature isn't she?  I can't believe I live in the same household with such a magical being.  Maybe she was imitating me and how I probably looked by the end of the day yesterday?
Posted by Runs To Get Waisted at 4:45 PM