Oh vey...first of all, I have been awake since midnight and it is now almost 5 am, so please forgive any misspellings or oddness.  ;)  Not sure what is going on except probably a bad combination of too much sugar, anxiety and insomnia!

I just thought that I'd take the time and write a quick post, none of which will really be running related, but I don't like letting too much time pass between posts.  I had a pretty lovely weekend, mainly because it didn't contain a double digit mile run.  Eric's birthday is on Tuesday but he's got to go on a dumb business trip and won't be able to celebrate his birthday on the actual day, so he got a birthday weekend.  Friday night I made his favorite pizza (sweet potato with pancetta and goat cheese) and we just hung out.

Saturday was a fairly lazy day, followed by a really excellent dinner at Beast, which is this super amazing restaurant in Portland.  It was our second time there, and it definitely didn't disappoint.  The chef, Naomi Pomeroy, is nothing short of a genius!  It's sort of a supper club type deal where you sit in communal seating and are served a prefixe menu.  You do not know what you're going to get before you show up, and it's actually pretty exciting to relinquish that control, although it would be your worst nightmare if you are a picky eater.  I have no such qualms!

This was our menu for the evening.  Everything was super delicious, but the sea scallop was by far my favorite part. 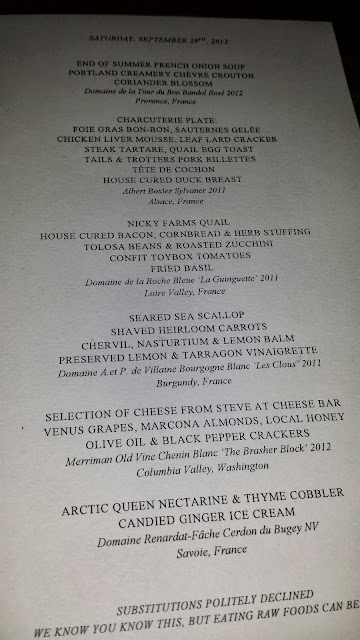 As I mentioned, the seating at Beast is communal, so it's like being at a dinner party with strangers, which can be super awesome or super weird depending on who is seated next to you.  Both times we've been fairly lucky and have been next to basically cool people, however we had some major douches at the other end of the table, with one super douchey guy in particular.  He and his wife (who were apparently from out of town) were so pretentious and were super loud about all the expensive dinners they've eaten, their European jaunts, this that and the other wine they've had.  The guy complained and found fault with every single dish on the menu, mostly saying that everything was "too salty".  They also apparently went to my favorite ice cream shop in the whole world, Salt and Straw at some point during their visit here.  According to the guy, he'd gotten the strawberry balsamic ice cream, and with a wrinkled nose said, "The strawberry in it tasted TOO much like strawberry."  Um, pardon my French but what the fuck does that mean, lol.

Look, I love food.  I love to cook, and I really appreciate fine dining.  Portland has some of the best restaurants I've been to.  I am also the type of person who can happily make a meal of Cheez-its and a couple spoonfuls Nutella, so I don't get too uppity about the whole food thing.  I really hate when people are so snobby and joyless that they say things like strawberry ice cream tastes too much like strawberry.  The couple brought an oldie but goodie SNL skit to mind...Lord and Lady Douchebag!  I should have pulled a Garrett Morris and "announced" the couple when they came to the table:


Sunday was a "big" day because it was the Breaking Bad finale, and we were having a couple of our friends over to watch it with us.  I definitely was sad and nervous for the finale, I am totally obsessed with the show!  I even had cookies made for our party.  If you aren't familiar with the show, they will probably just look weird to you, but I was pretty pleased with these.: 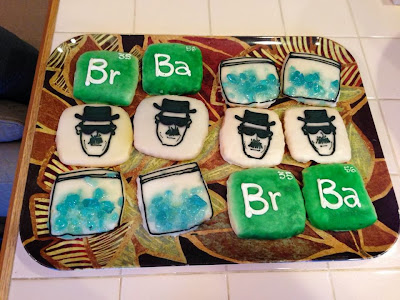 I personally loved the finale and thought it was the perfect ending.  I won't spoil it if you haven't seen it yet, but it ended exactly the way I wanted it to.  Kind of sucks, I don't have a good show to watch until Game of Thrones comes back!

As usual, I'll leave off with a picture of Molly, who was being a complete disobedient ass this weekend.  She was totally PO'd that my friends had taken over "her" section of the couch and she (horror of horrors) was regulated to the $40 cushy dog bed on the floor.  I keep telling her that she's lucky that she's not one of those sad, abused dogs in the Sarah what-her-face commercial that's like 15 minutes long where they play "Arms of the Angel".  As you can see, Molly is not bothered by any of that. 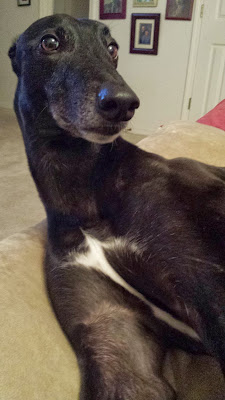 Posted by Runs To Get Waisted at 5:59 AM