Today I did something I rarely do, which is to get up and do a run in the morning before work.  Things are just getting to critical mass, and I'm kind of forced to do it, since I can't run 14+ miles one day a week!  It's just way too hot to do it after work, which is my preferred time, and my legs/feet physically cannot handle a treadmill.  I gotta get miles in somehow, so, there it is.

I woke up at 5 am and had my clothes all ready to go, probably a good thing since I am barely human at that hour of the day!  It was still dark and I was a bit skeeved out about that, so I puttered around and made coffee and took Molly for a quick walk until it got a little lighter, so it was probably closer to 5:40ish by the time I got out of the door to actually run.  I glanced down at my weather app and saw that it was 52 degrees, although it felt much warmer than that.  Better than the 80 degrees my fool ass ran in last week.

There is really nothing special or spectacular to report about the run, other than I kind of hated it.  I felt tired, sluggish, and my foot was giving me all kinds of hell.  I really wanted to just do 2 miles, but I knew I needed to push for the 3 miles.  I know I should be doing more miles than that, but I'm really trying to spare my foot and get away with the bare minimum that I can at this point.  Plus, I seem to be so slow these days that doing 5-6 miles would take me like 12 hours!  I just did a simple out and back, since that's all that my pre-coffee brain can handle.

I was amused at one point because I saw a young teenage girl out walking her dog, and she was wearing overalls.  I totally had one of those old people moments where I was thinking, "Oh JESUS are those coming back into style?!?"  I mean, I wore overalls when I was a freshman in high school (paired with crop tops and combat boots OF COURSE, a la "My So Called Life"), and that feels like yesterday, even though it was roughly 200 years ago.  I suppose I'm a little in denial that the fashion pendulum is swinging back yet again.

I did my 3 miles in about 42 minutes.  Not exactly spectacular, but hey I got out there and got shit done, so I'm good with it.

I was pretty excited to get a book I ordered from Amazon that was recommended to me by one of the ladies in my running group.  We were talking about injuries during the hellish last 2 miles of the route on Saturday, and I was telling her that my foot was being a total jerk.  She recommended this Trigger Point Therapy book to me, and said that it worked wonders for her her hurt shoulder, as well as heel pain in one of her friends.  It was pretty cheap ($15), and I am willing to give just about anything a shot when it comes to my foot.  The whole premise is that sometimes the thing that's actually injured isn't necessarily what's in pain.  You're supposed to massage these trigger points a certain way, and it resolves the pain.  The book is divided into sections based on the body part, and then from there tells you where to massage depending what area of that body part hurts.  I just got it, so I haven't had time to dig into it, but I'll let you guys know what I think! 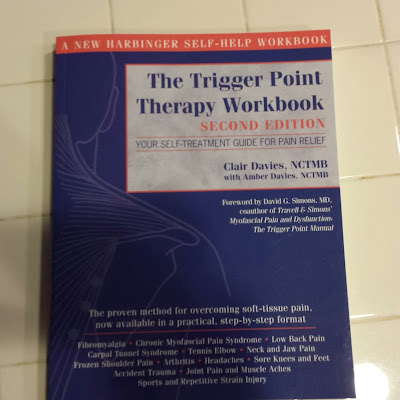 Posted by Runs To Get Waisted at 6:45 PM