I was totally dreading today's run due to the weather reports of it getting freaking hot again.  We had a couple of days where it was in the 70's and raining, a total tease.  Of course when it comes to a 3 day weekend where I also have to do a long run, it's going to get hotter than balls!  But, I cannot skip a single long run until my marathon, so I definitely just had to get it done.  I got a good night's sleep last night and laid all of my stuff out the night before so that I could try to get out of the door by 6 am.  Things went mostly according to plan, though I actually ended up waiting until 6:30 when it got a little lighter.

I came downstairs this morning and found this very sweet note from Eric.  He always makes the coffee the night before so that all I have to do is press the button on the coffee maker to get it started.  Definitely was a great way to start my day, and I actually took the note with me in my pack for inspiration.  :) 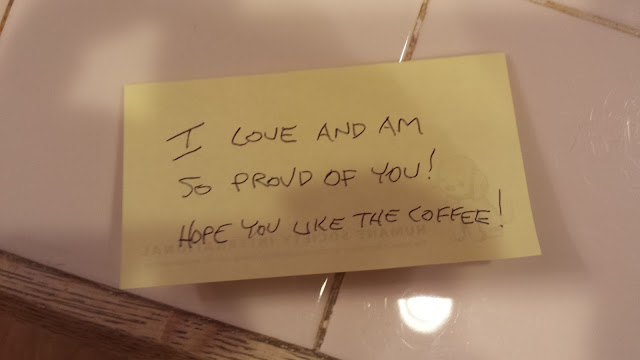 I thought that I would include a picture of all my crap laid out too.  Let no one ever tell you that running isn't a complete production, especially when you get higher up in miles.  This doesn't even include my clothes and my thermos of Nuun!  I frankly am looking forward to not having to go to all this craziness when my two big races are over! 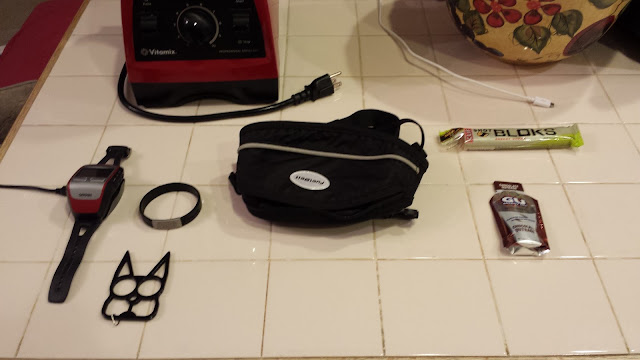 Also, under the advice of my friend Ally, I made the effort to get more potassium in my diet this week to see if it would help my leg cramps.  Unfortunately it involved ingesting two things I don't really like, bananas and coconut water.  I just really don't care for bananas and never have, especially if they are very ripe.  I just ended up having a smoothie every day for breakfast and threw a banana in so that I wouldn't have to really chew it or taste it.  And coconut water?  Blech!  I really have to make an effort to choke that stuff down, it tastes like dirty balls to me.   (Amusing quip from my husband:  "That is not a flavor profile I am familiar with.")  However, I figured that even coconut water was an acceptable alternative to the painful leg cramps I have been experiencing.

My route was basically the same as last week, except that my first loop was 6 miles, followed by 2 more 5 mile loops.  Things started out ok, except that the humidity was insane, and I was really having trouble breathing.  I didn't bring my sunglasses with me, so when the stupid sun rose up higher, I was blinded for the last 3 miles of my first lap.  That is pretty much when I started live Facebooking my run, just to give you some insight into some of the silly stuff that runs through my head, and also just to have some online company during my run.  The Facebooking ended up being kind of fun, though I tried to not be too annoying about it.  This is a taste of what I was running into. 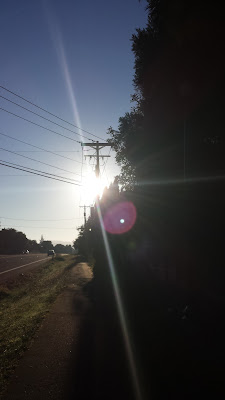 Quite blinding right?  The sun and this crappy summer can frankly go F off!  I was so happy when that first 6 mile loop was done with.  I was drenched in sweat from the humidity and was so hot.  I splashed water on my face, got to use the bathroom, and ate my first Gu of the day.  Instead of taking another round of Nuun with me I took a coconut water that I had stashed in the freezer to keep the potassium party going.  Normally I kind of choke it down under duress, but I have to say, it was pretty decent in slushie form.  Of course it was thawed within about a minute of being in my hot hand, but it was nice while it lasted.

The second loop was easier than the first, and not just because it was shorter.  I swear the temperature had dropped a tiny bit, and there was a small breeze that would blow in now and again, which made things a little more bearable.  I did find that my hips were starting to bother me towards the end of the loop, as well as my toenails.  I knew the damn things were probably too long, but was too lazy to clip them last night, and I paid for that during my run!  My second loop felt like it went by pretty fast, and before I knew it, I was back at my house at mile 11.  I took a comically long pit stop where I took time to clip my toenails, change my sweat soaked socks, wrap my foot to protect a hot spot that was starting to form, eat some Cliff Bloks and refill my water.  Again, I was already so hot that I was definitely not in a hurry to get back outside when I knew I'd really be facing some intense heat.  But, I again knew I had to finish up one way or another, so I pushed myself back out.

By this time the side of the road that I normally go on was in full sun, and there was not a single patch of shade to be had.  I spontaneously decided to cross the street and run on the other side in the shade, which was not only going to drastically change my route, but was also a little more dangerous.  There are just some funky intersections that can be intense, especially combined with the asshats these days who like to text and drive, or generally not pay attention to their surroundings.  Regardless of the danger, having shade was a godsend!  By this time it was super hot, and if I'd had the sun on me, I probably would have quit.  As it was, I did a lot of walking because my hips were really feeling dodgy.

And then a funny thing happened.  As my Garmin ticked away the distance, I kept waiting for my leg cramps to appear at around mile 12 like they always do, but they never came.  I thought by mile 14 that I would surely start to feel cramps, then mile 15, then 16 but nope.  I was dumbfounded, amazed and so relieved!!  I guess I wasn't getting enough potassium, so a huge thanks to Ally for the banana and coconut water recommendation!  And maybe I'll learn to love coconut water....eventually.

I finished up feeling fairly good, although HOT.  Ya'll know how I feel about this weather! 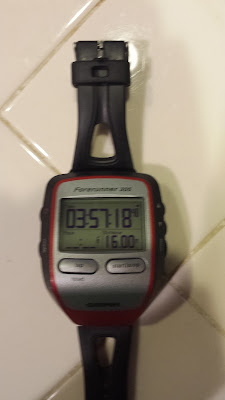 So this time was a total roller coaster for me.  When I first saw that it was going to be about 4 hours, I was disappointed.  Then I didn't care, because I was so happy to be done and proud that I'd stuck it out in the heat that I figured I should be happy with whatever.  Then I put my time into a pace calculator and realized that I went FASTER than last week!  My pace last week was 15 minutes per mile, and would have put me at finishing the marathon in 6 and 50 minutes.  With this pace, I calculated that I am now on pace to finish in 6 and a half hours.  Now, I am certainly not going to qualify for the Olympics, but it's faster than before!  I definitely felt encouraged.  I still have a few weeks of training left, and I hope that I'm able to improve my speed even more.

I celebrated my run with lunch at a Mexican place by our house.  We probably always come across as alcoholic weirdos because we ask to sit in the bar every time, but that sign to the left of my fat head is why.  No minors, which means you can enjoy your meal in peace!  I asked for the smaller sized beer, and this is what they brought me.  And I am so polite that I finished it all!  ;) 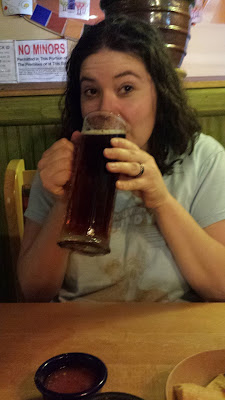 Posted by Runs To Get Waisted at 9:06 PM