Today will go down as a strange day indeed.  A good day, but a strange one.

Today was the big one, a 13 mile run with my training team through Portland.  I tossed and turned all night because I was nervous and scared to death about having to do the run.  My foot is still messed up just doing short runs, so I couldn't imagine what it was going to feel like at 13 miles.  I dragged myself out of bed at 5:30 am, which is really just a godawful hour to be up at on a Saturday.  I didn't have time for niceties like yoga, and I was extra bad because I skipped breakfast.  So bad!!  But I just couldn't imagine throwing anything down my throat at that hour of the morning other than a cup of coffee.  I figured the aid stations the TNT people provide are always well stocked with different snacks, so I was just going to have to make do with that.  So I packed a Gu and a bottle of electrolyte water and sped out to Portland.

I definitely felt a little impatient this morning with the whole "to do" of being with the group.  And I will preface this with the fact that I love what TNT stands for and the work they do.  But I am so used to doing things on my own schedule that it's hard to get used to the way the group does things.  When you get there there's at least 30 minutes to an hour of "stuff", like presenting a cape to the person who did the most fundraising, people getting up to tell their personal stories about cancer, lectures about eating enough salt packets, a warm up exercise session, a group picture, etc.  I was a bit impatient because I'd really hauled ass to get to Portland on time, and also because I knew it was going to take me so long to do my run that I couldn't afford to have the touchy feely stuff going on for an hour.  I know that sounds absolutely horrible, but I'm just being honest.  I made a mental note to myself that I am going to do my long run by myself next week, just to take a little break from the fuss.  Being able to get started by 6 am instead of 8 am would be pretty rad.

I started out with a girl from work who is also doing the half for San Francisco, but plans to walk it.  Again, I felt obligated to walk with her so that she wouldn't be by herself, so for the first 3 miles, I pretty much walked.  I enjoyed talking with her, but also was feeling anxious and just wanting to run.  We stopped at the aid station, which was her turn around point, and I was secretly glad since it meant I'd be by myself after that.  After slamming down some gummy bears and peanut butter pretzels, I finally was able to start jogging.  It was a little rough at first because we were going up this giant hill to Forest Park, so my legs were burning!  I finally was able to make it to the top of the hill, which was my turn around point.  I stopped to stretch my legs and eat the Gu I'd brought with me.  I'm pretty convinced that Gu can solve world problems, I always feel like I could take on the world after eating that stuff!!  The chocolate mint one is extra good too, it's just ridiculous.  Once I ate that and started back down the hill, I found a burst of energy, and settled into this really great rhythm.  I wasn't even overly concerned with my Garmin, though I could hear it ticking off the miles one by one.  Now, I guess I should back up and tell you that there were two times where I stopped my Garmin and forgot to start it up again, so I was slightly in the dark about how far I'd actually gone.  Doh!

So at around the 7 (or 8?) mile mark, I saw my first unusual sight.  Unbeknownst to me, the Portland Police have the horses for their mounted patrol stabled right in NW Portland.  I ran past a horse arena, and they had four of them out there just kind of doing their thing.  They were beautiful, but also kind of cracking me up because they were all taunting one another.  Two of them were really teasing one another, just nipping and squealing and having a grand time.  I stopped to take a few pictures: 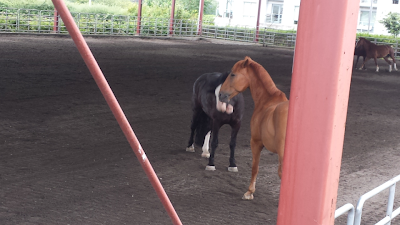 I could have literally stood all day and watched them, that black horse especially was so beautiful, even though he did seem like a little asshole for biting the others.

I continued on and after a couple more miles, I ran into my next weird sighting.  It started out with me seeing someone running in a Superman t-shirt, which I honestly didn't think much about, until a woman ran past me wearing a cape.  I still thought that maybe it was just Portlanders being Portlanders, because that's how shit rolls around here.  If you see something strange, it may just be someone letting their freak flag fly.  But that myth got dispelled pretty quickly after another few feet.  All of a sudden I began to see more and more people running and dressed up in superhero garb.  Hulks, Supermans, Batmans, Poison Ivys, Wonder Womans...you name it, it ran past me.  As I continued down the waterfront I could hear someone on a loudspeaker, and realized that it was some sort of official race.  I got to the central location of where everything was going down and just about had a heart attack.  There was a big group of dudes dressed as Storm Troopers, Iron Man and Boba Fett and some other characters I don't know, and I pretty much had to run through a gauntlet of that.  I am not too keen on mascots and stuff like that, so I was FLYING through there.  We found out later that there was some kind of official superhero race going on, and there was a 10k/5k/2k.

During one of my walk breaks one of the TNT ladies caught up with me, so I continued to walk with her for a bit.  My body felt a little grouchy, but nothing that I couldn't work through.  By 10 miles (or what I estimate was 10), I even still felt capable of running, so I did.  Then suddenly with 2 miles left to go, my body just completely seized up.  My legs were cramping like a mother, my hips were aching, and I really felt I couldn't go another step.  If I could have sat down in the middle of the sidewalk and not moved for 7 hours without looking like a complete ass, I totally would have.  In the midst of all of this, I heard a bizarre but familiar sound.  I suddenly realized that there was an abandoned lot with about 20 goats in it!  Talk about the ultimate "what the hell" thing to see in the middle of a city.

The same TNT lady caught up to me again, and we just walked the rest of the way together.  It was one of the few times I was glad someone was with me, because I was able to focus on talking instead of the fact that my body was shutting down.  It was a struggle, but I have never been so damn happy to see the end of a route as the one today!!  I took the time to stretch out a little before stumbling off to my car, and I actually felt really good and proud of myself for sticking it out.  I took an ice bath when I got home, ate the huge turkey sandwich that my wonderful hubby bought for me, and now I"m about to go off and take a nap!
Posted by Runs To Get Waisted at 2:33 PM