Finally, A Good One

I won't keep you guys in suspense, I finally had a good run today.  Of course 2 weeks ago I had the leg cramps from hell and was dealing with heat, and last week I ended what was supposed to be a 15 mile run at 4 miles, and sobbed in my living room for almost an hour.  Short of being attacked by wolves or hit by a car, there was no way the run was going to be any worse today.

I think it all came down to being prepared emotionally and just plain old prepared to run.  I got a full night's sleep both Friday and last night..  I didn't eat totally ridiculous, somehow even in spite of the fact we were at the Oregon State Fair all day yesterday.  I laid all of my running gear and food out last night before bedtime, so that way I wasn't all scrambling around and flustered this morning.

I got up at about 6 am, got dressed, and then relaxed with a cup of coffee and a Cliff Bar.  I had never eaten a Cliff Bar in my life until this morning, and I have to say, WAY tastier than I'd anticipated.  It was also just the right amount of breakfast before a run, and obviously was fast too.  I wasn't the only one who seemed to think Cliff Bars were an excellent idea.  Since Molly is a begging hussy, this was my view from the kitchen table this morning: 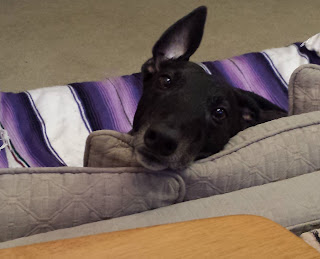 Yes, I did end up giving her a treat finally, but not any of my chocolate mint Cliff Bar!  I finally got out the door at about 6:45 am, and decided instead of driving to the nicer location I'd been running in by work, to just do out and back intervals and use our house as my "aid station".  I kind of hate running around where I live.  It's not exactly nice or scenic, and there are definitely some creepers around.  It's very traffic heavy, which is good and bad.  It's super noisy, but at least there are people around if I'm getting my throat slit I guess.  I took my stab knuckles with me for my first 5 miles since it was early and not many people were around, just in case.

One thing that was good about me getting out early is that the weather was on my side, and my God how the weather makes a difference.  During my first 5 miles, not only was my pace on par, but I was actually enjoying myself.  It's been a long time since I've thought, "Wow, I really love doing this" when I've run, and feeling that was so encouraging and made me happy.  I do love running, but the heat lately has been clouding my judgement and totally tainting my feelings towards it.  Trotting along in the faint daylight and feeling coolness all around me was such a welcome change, and as a result, I saw some pace numbers on my Garmin that I hadn't seen in a long time.  I held to around a mid-11 minute pace, but occasionally was running in the 9's and 10's.  God knows my Garmin hasn't seen a pace in the 9's since I don't know when, so I was pretty happy!

As I expected, the first 5 miles felt pretty easy, and conveniently put me right in front of my house for a much needed potty break and a refueling opportunity.  I ate some Cliff Blocks, used the bathroom, got more electrolyte water and got back out there.  This interval was a bit tougher.  The sun was all the way up so it was definitely hotter, and I was quite a bit slower.  I didn't really feel discouraged though, I was just kind of intent on plodding along and doing my thing.  After about an hour and 15 minutes, I was finally at my front door again, and my hips were definitely feeling achy.  I refilled my water bottle, went to the bathroom again, and ate a chocolate Gu, which ya'll know is my snake oil when it comes to running.  I love that stuff.  I specifically saved it for last since I thought I would truly need the boost around mile 10.  I also decided to experiment with something I read on the internet to try to hold off the leg cramps I inevitably seem to get around mile 10.  Pickle juice.

I'd heard for years about pickle juice, and especially football players taking it for cramps, but hadn't really given it much thought.  Quite a few running sites recommended it, and I figured it couldn't hurt.  I took about a shot glass worth of pickle juice, and bagged some up to put in my fuel belt as well in case cramps hit me out on my final interval.

I had mentally steeled myself for the fact that my last 5 miles were probably not going to be fun, but that I had to do them, I would survive, and I would be fine.  And I kind of was fine until about mile 12, and that's when my legs really started in on me again.  Not full on cramps, but twinges of cramps that wanted to happen.  My left knee also started hurting, so I really had to walk a lot during my last interval.  Before my turnaround point at 12.5 miles, I decided to deploy my second shot of pickle juice since my legs were beginning to cramp a little more insistently.  I did find that the cramps tamped down a little bit, but at this point my knee, hips and left foot joined the chorus of  "Screw YOU if this is how you're going to treat us!"  I trotted along when I could, but it was still incredibly painful.  It went that way on and off until mile 14, when my leg cramps got dire and I could only muster a pained walk.  That shit HURTS man, seriously, and it's worse because my breathing and energy was just fine.  I mentally could have run, but physically my legs were absolutely done.  I must have had the craziest look on my face, because I was so laser focused on finishing, and I was mentally repeating "Your legs and hips are fine" over and over in my head.  I finally got to about 14.75 miles, and as I waited at the crosswalk for the light to turn, I BEGGED my body to cooperate.  As far as I was concerned, my legs could have the cramp party of their life once I was at home, but I really did want to finish strong and at a run.  Somehow, I managed to do a pained trot for the last little bit of my run, and to ignore the horrible cramps.  I finished up in front of my house with a loud F bomb, which I'm sure my religious neighbor who was in his front yard (and who looks like Ron Jeremy) LOVED. 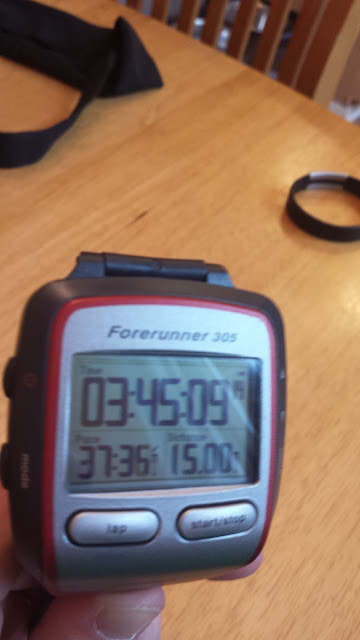 Even if it's slow and lame, I'm totally proud of this today.  I definitely have concerns about the consistent cramping of my legs, as well as having a 15 min/mile pace, but for today I'm going to be proud of this.
Posted by Runs To Get Waisted at 1:55 PM