So I had a major setback after last week's training when my plantar faciitis flared up on me.  It pissed me off something awful, because I really have been healthy so long.  I was actually used to moving/walking/running without pain, just as I got used to living WITH pain a few years ago when I couldn't get rid of it.  I think several factors played into it.  For starters, the distance was too much.  I knew going into it that 10 miles was too many miles, which is why I said I wanted to do 8.  Of course getting lost and all of that forced me to do almost 10.  The route we did was pretty hilly, and I don't think that did me any favors, especially since it really strains your feet.  At least it does me anyway.  I also think the warm up they did before the run set me off on a bad foot (pun intended).  A ton of squats and jumping jacks, which just feels so jarring to me.  On a separate note, every time a man (and it always seems to be a man) is gung ho about incorporating jumping jacks into a workout, I want to strap a set of big honking DD boobs on him, and see if he feels differently about jumping jacks after about 5 or so.  Anyway!

On Monday I tried to run on the treadmill because it was a thousand degrees outside, and my left foot that was already hurt started barking at me, and then my right calf just completely seized up.  I kept pausing the treadmill to stretch my calf out, but it wasn't having any part of it.  I finally stopped the treadmill after letting out a very frustrated F bomb, which I"m sure the other gym goers enjoyed, and opted to run on the indoor track.  I usually avoid the track for 2 reasons:  1, people like to let their little kids play on it, even though there are signs all over the place saying that only people 16 and older are supposed to be on it.  It's kind of hard to do laps when you're dodging some wild toddler running out of control, or women who bring their Cadillac sized strollers up there to do very leisurely laps around and gossip with their girlfriends. (note to these ladies, this is why God invented bars and brunch places)  2, the track is BORING.  It takes 12 laps to make a mile, so doing any kind of distance is challenging since you have to keep track of how many laps you've done.  Regardless, it's what I had, so I made do with it.  I did probably about 2.5 miles total, and the next day my foot was worse.

After icing and stretching my foot all week, I emailed my coach and told her about my foot.  She thinks I"m daft for trying to do the 2 marathons and wants me to switch to the half for both PDX and SF.  I told her that I am firm on doing the Portland full even if it takes me 7 hours and I have to crawl over the finish line with bloody stumps.  So, there was an awkward exchange of emails back and forth about me downgrading one of the races, which I do not want to do.  It just upset me, because I feel like the only person who believes in me and doesn't think I'm nuts is Eric.  He has never once been like "Shouldn't you think about dialing it back?", he's always so encouraging.  I mean, I wouldn't mind running just the half for SF, but come what may, I've gotta have the mileage in to do a full marathon.   We did compromise and decide that I didn't have to make a decision until after training today about SF, and that I could do 5 miles instead of 10 today.

I thought the route for today's training was WAY better than last weeks.  I didn't get lost which is always a plus!  But it was in a cool part of a residential Portland neighborhood that had tons of old school houses, and it was a flat course.  I started out with a lady who was super nice, but her knee was bothering her, and she'd forgotten her inhaler, so we were just walking for the first mile plus.  I was enjoying chatting with her, but I really did kind of want to run, so that was totally bumming me out.  She finally told me to just go ahead and do my thing, and admittedly I was a little relieved.  I hate to say it, but I was loving being alone with my own thoughts once I got going.  I think I am just always going to be someone who likes to be alone when they run.  Not that everyone in the group isn't super awesome, they totally are, I guess I am just what you'd call a "cat runner" as opposed to a "dog runner".  Other than my foot, I physically felt pretty good, and felt like I was in a good place mentally too.  I barely looked at my Garmin, which is very unlike me, I just depended on the beeps to tell me when I'd gone another mile.  I notice that I tend to not look at it when I'm actually enjoying my run.

I did have to pee mega bad about halfway through the run, and got into the skankiest portapotty known to man.  I mean seriously, it's one of those portapotties where you step in and immediately say, "I so wish I had a penis and could pee standing up".  Let's just say I put the "hover" move into use, and there was a good 5 inches of space between me and the scariness below.  No way in hell was I sitting on that biohazard.

I finished my five miles in an hour and 29 minutes, which is slow, but was due to the first mile being a walk.  I really think I could have finished in an hour if I'd been on my own, but I'm not too worried about it.  My foot feels somewhat ok, though it does hurt a bit.  I stretched and iced when I got home, so I'm hoping that it calms down!

And I'm sorry for the lack of pics on the blog lately, I know it makes the posts kind of boring!  I need to get in gear and start including some.  For now, here's a picture of Molly, who I have barely posted about! 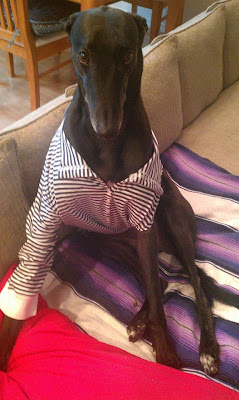 This is actually from a few weeks back, but she had a sore on her leg she would not stop licking, and she would tolerate bandages for about 45 seconds, which required me to get creative.  I put her in one of my shirts so that her boo-boo wold be covered.  She was flaming pissed at me about it, as you can see from the picture.  She is such a diva, but we love her!  I do miss Natasha, because she was so sweet and lovely.  Molly is a little more aloof, but loves us in her weird little way.
Posted by Runs To Get Waisted at 1:16 PM