Oh man.  I promised you guys a run and a post tonight, and I'm delivering on both.  You may want to look out of your window to see if the Four Horsemen of the Apocalypse are standing outside.  ;)  It's just been insanely busy for me.  I'm always so conscious and guilty about going to long between posts, but at the same time, it's hard to do it on even a weekly basis, much less a daily one.  I do love writing, and it's one of the few times I get to be creative and do something that makes me happy, so I want to try to get back into posting more often.

In the meantime, the last couple of weeks have been fun but action packed.  We went to Seattle last Friday to see Paul McCartney in concert.  It...was...amazing.  I cried at least 5 times, sang until I was hoarse, and had a blast.  Paul put me to shame, because he played until almost midnight, and I was thinking "Um Paul, I'm old and need to go to bed!".  The surviving members of Nirvana came out and played with him towards the end, and I just about passed out, I was so excited!  Definitely one of those concerts that I will hold dear to my heart, it was very special.  The next day we had to turn around and drive back to Portland because my family was coming in for the whole week.  Their visit was great but definitely packed.  I was averaging about 5 hours sleep a night, which is not pretty!  We did a ton of fun stuff, including a hike that my 9 year old niece and I did to the top of Multnomah Falls, which is about 650ft up!  I was super proud of her for sticking it out, she was a little trooper.

So, I did run today, and it SUCKED.  It's the damn heat, I just simply can't stand it.  It was 80 degrees by the time I went out, which I didn't think would be so bad, except until it was.  As I was looking at my weather app, I was looking at the weather for the rest of the week.  I decided to add my meteorology color commentary to the forecast: 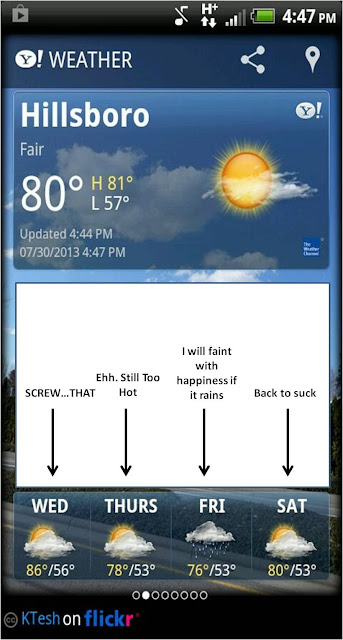 Seriously, tomorrow can just straight up go to hell with that 86 degrees BS.  And I'm not kidding, I will probably spin around in a field singing like Julie Andrews if it actually does rain on Friday.  I cannot tell you how much I miss the rain and the cool.  When I was running, about a million things were going through my mind, but one of the things was how much I was looking forward to fall.   Just thinking about apple harvest, Eric and I's traditional pilgrimage to the cider mill, sweaters, crockpot soups and chilly days makes me wish I could turn the clock ahead with my mind!

Anyway, I was just miserable.  Even walking fast had my heart pounding, and my breathing was awful.  I felt like I had a heavy weight on my chest, and I was praying for the run to be over as quickly as possible.  Of course it wasn't, since I could barely breathe once I would run, so there were tons of walk breaks.  As you'll see from my Garmin picture, the heat took a total toll on my speed.  It took me 46 damn minutes to run a paltry three miles.  I'd rather forget about it! 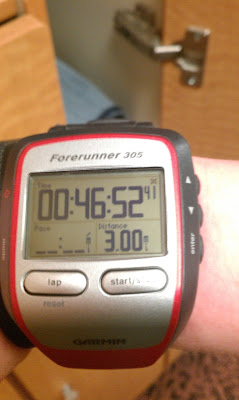 The one thing that was somewhat positive was that I enjoyed being by myself, and it gave me lots of time to think.  Usually my mind goes blank when I run, which is very welcome since I tend to worry and have a lot of anxiety about stuff all the time.  Today, I was trying to distract myself from my misery.  Here were some of the thoughts going through my mind:

1.  I enjoy running by myself, and that's ok.
2.  I will never, ever again schedule a race that requires me training in the summer
3.  I wish I hadn't taken the cold weather for granted before

As you can see, I was quite preoccupied with how much I miss cold weather!  Hopefully the runs for the rest of this week go ok.

Oh and by the way, I decided to take my coach's advice and switch to the half marathon for San Francisco.  She wanted me to do the half for both races, but I was adamant on not backing down from doing the full for Portland.  So there it is!
Posted by Runs To Get Waisted at 8:33 PM