Today was another good eating day, and I also tried a new recipe for dinner that was another success.  Breakfast was a basic smoothie with berries, almond milk and yogurt.  For lunch I had a couple of eggs topped with avocado and tomato, and dinner was the Spring Panzanella recipe from 101Cookbooks.com: 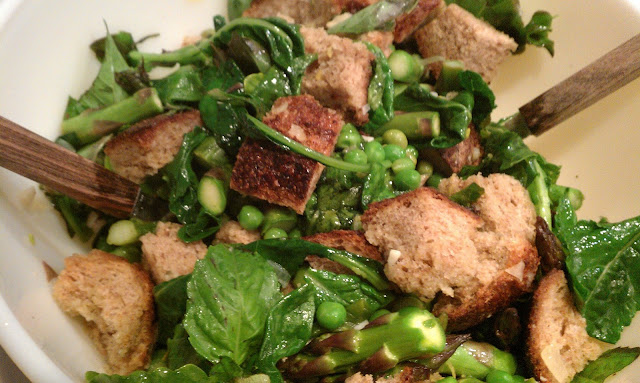 For those who don't know, panzanella is a bread salad.  Most of the time I've seen it, it's done with tomatoes, cucumbers, etc.  I was drawn to this one because it has 2 of my favorite vegetables, green peas and asparagus.  It's a super simple recipe, I just used a bag of frozen peas (thawed in the fridge overnight), a bunch of asparagus, half a loaf of whole wheat bread and 3 handfuls or so of baby kale.  The flavors are very delicate, and it was a super enjoyable dinner, though pretty high in PP (10 per serving).  If you'd like to try the recipe, you can find it here.

I did a run again today, and while it was slightly better, it was still pretty miserable due to the fact it was 86 degrees.  I remembered my Garmin today, which helped put me in better spirits about doing the run, especially when I found out that I went 3 miles yesterday instead of 2.2!    The run started out ok, and I managed to make it 0.75 of a mile before I took a walk break, which was better than the 2 seconds I was pretty much able to do yesterday.  I struggled through the first mile, then flat out walked 97% of my second mile.  I can't describe to you guys how oppressive the heat was.  Even though the park is shaded, I felt like I was baking.  I started getting a headache and getting dizzy, and felt discouraged.  I started thinking that despite my utter hatred of the treadmill and running inside, that just maybe I was going to have to do a run on the treadmill at the gym.  Then suddenly I ran into this: 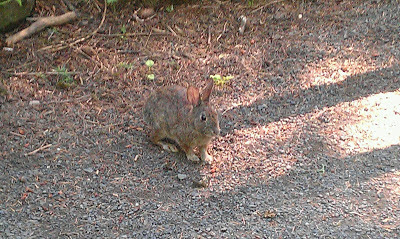 This is why I like to run outside.  Just as you're feeling like shit sometimes, something like a cute baby bunny will hop out and make things bearable.  The cute little guy just stood there and let me snap a few pics of him, then slowly hopped away.  I started my 3rd mile and was able to run on and off a little more, but it was still pretty horrible. 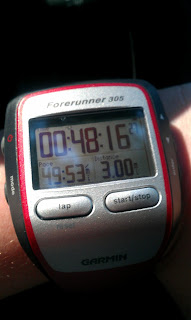 I mean, it's certainly not a great time.  I mean just a few months ago I was doing 5 miles in an hour, so this is kind of disappointing.  However, I wasn't running in 86 degrees either.  I really need to figure something else out.  I hate the thought of running in the morning, but that may have to be the compromise in order to not feel like total crap.  At the end of the day, I'm eating good again, and I'm back out there doing some activity, so I'm satisfied with that.  Hopefully I won't totally embarrass myself Saturday!
Posted by Runs To Get Waisted at 7:50 PM