As you guys know, I had to take a break to prep for LASIK surgery.  Well, my surgery was Thursday and I am happy to report that it went as smoothly as having your corneas lasered open can go!  I will be honest, I was filled with complete terror leading up to the surgery.  Even though I have (well HAD I guess) wretched sight, my crappy eyeballs are the only eyeballs I've ever had or will have.  All of the "what ifs" ping ponged around my brain for the 3 weeks until my surgery, and I pictured it totally being like Clockwork Orange: 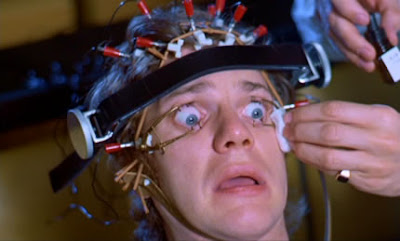 Thankfully, it is the exact opposite!!  I went to TLC Vision, and it was a wonderful experience.  All of the employees were kind, compassionate and go out of their way to put you at ease.  I felt like they were friends by the end of my million appointments I had leading up to surgery.  The surgery itself is over SO FAST, and you literally feel nothing.  And they give you Xanex before surgery so you are super relaxed and happy when you're going in.  I literally chit chatted with the doctor and nurses the entire procedure, and it was over in about a minute and a half.  They gave me another Xanex, which just totally knocked me out, then I was on my way.  The craziest thing was that I was able to slightly see within seconds after surgery.  Everything looked good at my followup appointment, and they also cleared me to drive but I'm not sure that I feel comfortable doing that right now.  My vision is still fluctuating, although I can tell it's going to be amazing when everything heals up.  Since my vision is still so hazy, I"m happy to let Eric drive, which he does most of the time anyway!  For awhile I"ll be sporting some very sexy (not) goggles when I sleep, and putting a zillion drops in my eyes a day.

Deciding to get LASIK was pretty spontaneous and also put a halt to training.  You cannot wear contact for over 2 weeks before the procedure, and unfortunately my glasses were super old.  I have never been able to get a good prescription in glasses, so I just really never wore them, so having to wear these for over 2 weeks was absolute torture.  I would honestly relive the actual procedure 20 times over rather than the glasses part.   Working all day at a computer screen was hell since I couldn't see very well, and exercise was just out of the question.  I don't care if it sounds like a sissy excuse or not!

So now on to more important stuff.  I dropped a pretty big bomb on Facebook, which is that I signed up for the Nike Women's Marathon in San Francisco on Oct 20th.

Again, I am probably out of my damn mind for doing this race since it's 2 weeks after Portland.  There was the option to do the half marathon, but I decided to go for the full.  What can I say, I was completely seduced by the course, which goes through the coolest parts of San Francisco.  Somehow, the thought of not seeing every bit of the course left me feeling like I would be cheating myself if I only did the half.  And I'm sure a couple of you are saying "um bitch, you've run like 30 feet in the past 3 months, so how are you going to do this", and you are right!  The beauty is, I signed up with a group from work with Team In Training.  They not only provide us mentors, but will be providing nutrition advice, injury prevention tips, coaching, coddling, training plans...the whole nine yards.  There are also group training runs, which is scarier than hell to me.

You see, I hate running with people.  Absolutely hate it.  I don't like to chat, I don't want people seeing me sweat, seeing my fat jiggle, seeing my mouth agape as I gasp for air, and see how painfully slow I run.  When I run my brain goes blank, which is a relief for someone who has anxiety and worries all of the time.  I am rather shy in nature, though some of the people who know me best would dispute that, but it's true.  If I don't  know you well, my guard is up and I am shy.  Groups of people especially cause me social anxiety and angst.  Running is somehow so...intimate.  It feels weird to share the experience with another person.  But I've realized after these few months of going it on my own that I will NEVER be better unless I take that plunge and start running with others.  I don't push myself as far as I COULD go when I am alone.  Especially in these hot summer days, my natural instinct with heat and running is "screw THAT".  But with this, shit is real, and I"m in.  If I don't show up for group training runs, then I look like a giant douche and who wants to be the "this bitch never shows up to group runs" person?  So I am terrified, but am going to my first group training next Saturday.  Yikes!

I know the phrase "it's gonna be epic" gets really overused, but I don't know that there is any other phrase to describe October.  It truly is going to be epic.  My very first marathon, followed 2 weeks later by ANOTHER marathon through one of the coolest cities in the US.  Oh and did I mention that all finishers in the SF marathon get handed a Tiffany necklace at the end of the race by a firefighter in a tux.... 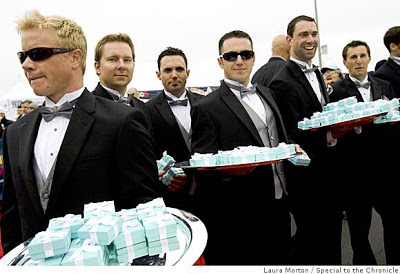 Posted by Runs To Get Waisted at 4:49 PM