Hot Potato! (Not Really, It Was Kind of Cold)

Well, only 2 more days until the Helvetia 10k!  I am definitely a bit nervous about it, mostly because I hope and pray this stupid heat wave we're having calms down.  If I have to run in the heat, nobody is going to be happy!  No running again today, I've just wanted to take it easy.  Tomorrow I'm going to do a session of Yin yoga, and then do it again on Saturday morning just to make sure I don't totally abuse my joints when I get out there for the race.

I experimented with a couple of new recipes tonight.  One was a green pea soup from 101 Cookbooks: 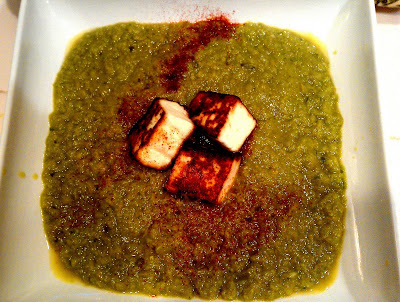 I didn't have a few things the recipe called for (specifically serranos and fresh ginger), but I left out the chilies and used ground ginger.  The soup was good but didn't blow me away.  Usually Heidi's recipes are a home run, so I suspect if I followed her recipe and added the chilies in that it would have had a little more depth.  I also made mine too thick and my blender sucks, so my soup wasn't thin and pretty like Heidi's.  Also, it's hotter than Satan's buttcrack in the house, so maybe eating hot soup wasn't helping my feelings towards it.  I did top the soup with pan fried paneer cheese like she suggested, and that was pretty tasty.  If you'd like to try out the Green Pea Soup recipe, you can get that here.

The second thing I made was a twice baked potato from one of the "gomers" of Two Gomers Run For Their Lives fame: 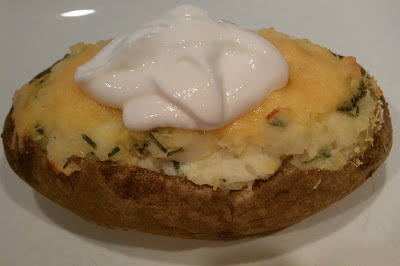 So while I know the potato looks good, it was a slight fail due to some errors I made, although with some adjustments it would be really tasty.  First of all, the potatoes I used were HUGE, so I need to get smaller ones before attempting this again.  The original recipe that Stephen posted for this had a ton of sour cream and butter in the filling, so when I made this, I made it with no butter and used a half cup of nonfat Greek yogurt instead of sour cream.  My mistake was not considering that without the butter that the filling was going to be dry, so I should have upped the amount of Greek yogurt and maybe added a splash of almond milk or stock to make the filling more creamy.  I baked and filled the potatoes last night, which didn't help the dryness factor.  When I put them in the oven, they didn't have a chance really to get hot in the middle.  The result was that the flavor was decent, but the potato was dry and crumbly instead of being amazing.  Again though, if I adjust all of what I discussed above, I think this could be really good.

The recipe was posted on the Two Gomers Run For Their Lives Facebook page.  I have actually been going back and listening to their podcast all over again, starting at Season 1.  I can't believe how much they have grown as people and runners since that first season!  I highly recommend checking them out.