Before I launch into my race report, I wanted to give some background about the Helvetia race, mainly that the Helvetia 10k is the first race I ever did, and is what got me into running.  It was 2009, which was a horrible year, and I was looking for things that were out of my comfort zone and that would make me feel good about myself.  Eric and I both signed up for the race, and like the gomers we are, didn't train.  We went and had a total blast anyway  (though I remember being massively sore the next day), and that was when I first became hooked on running.  It's literally the perfect race, the one caveat being that I wish it was in May instead of June due to the heat.  Other than that, the race is incredibly organized, you get great swag when you pick up your packet (free gels, tons of coupons), the post race food is the bomb and the course is beautiful.  Oh, and it's pretty much a 10 minute drive from my house, so you can't beat that!

The morning began at 4:25 am when Molly decided she was bored, and that Eric and I both needed to get the hell up RIGHT THEN.  She whined, jumped on the bed and poked me with her wet nose until I got up.  I was pretty mad about it at first, but then thought, "Well, that gives me plenty of time to do my Yin Yoga DVD at least".  I really need to make it a point to do that DVD before every race, because later on, I'm pretty sure that it saved my legs.  When I was done I fixed us a really quick breakfast, and we split scrambled eggs with cheese and avocado stuffed in half a pita pocket.  After that we were off!

We were meeting one of Eric's friends and his wife who were visiting in Chicago and were doing the race with us, although we were all doing separate races.  Greg was doing the half marathon, Kristen was doing the 5k with Eric, and of course I was doing the 10k.  I am honestly in awe of Greg, a runner who has not only run countless races, but recently accomplished his goal to run a marathon on every continent.  Yep, you read that correctly, continent.  He just completed a marathon in Antarctica last year, which was his final race to do.  And if that wasn't enough his new goal is to run a half marathon in every state, and Oregon was his first to check off the list!

We all met up and chatted with Greg at the starting line, and he was telling us that he hadn't been feeling well lately, and that he probably was going have a horrible time and be very slow.  Now my definition of slow is what my fat ass does, which is about a 12 minute mile.  So we asked what he thought his finishing time was going be and he sighed and said, "It's probably going to take me 2 hours."  For those who don't feel like doing the math, that's about a 9:20 minute mile, which I would be praising the gods if I could consistently run at a 9:20 pace!  I teased him about it a little, and it's like, if I do this freaking 10k in 2 hours I'll be lucky.  Shortly after, Greg's race left at 8, so we stood and chatted some more until our race left at 8:30.

Eric and I started out together, but then he "Galloway'd" as he put it and took some walk breaks.  I actually managed to run the first 1.25 miles without stopping, which pleasantly surprised me.  In fact, my body physically felt good the whole race, which I credit purely to the yoga that morning.  The drawback was that it was so freaking hot.  I mean I am a total baby around heat anyway, but it actually was super hot by anyone's standards, and I would dare say it was near 80.  There is no shade on the route, and you're running on black asphalt with the sun blaring down on you.  That ultimately slowed me down, and made me seriously envy my husband when he got to turn around to go back to the finish line, and I had to go up a giant hill to continue the 10k course.  For most of the race I was torn between being happy that my legs felt good, that I was running more than I thought, and that I felt completely miserable overall because of how hot I felt.

The one part of the course I'd forgotten about was a piece that is down a gravel road.  I use the term gravel loosely, because it's really more sharp rocks.  Besides the fact that it's an unstable surface to run on, the rocks really hurt if you wear minimalist shoes like I do.  That was the one part of the race where I was like, "This needs to be over right now."

By the time mile 4 came, I had a bigger issue on my hands, and that issue was that I had a Code Brown alert, and it hit me that it was a complete and utter possibility that I may poop my pants.  And you may laugh but if you are new to running, you have been warned.  Yes, all of the inspirational memes and Nike slogans in the world never cover the fact that at some point, you will feel like you are going to crap your pants when you are running.  There are all kinds of horror stories on the 'nets about people doing just that during a race, and all I can say is if that ever happens to me I am allowing Eric to divorce me, no hard feelings, and I'm going into witness protection to hide away from the shame.  I kind of had to "go" at the start of the race, but my body didn't cooperate with me when I got my turn in the porta-potty.  I passed several potties but the lines were totally insane, and I didn't want to add more time to my run.  (Note to the rest of you, add time to your run...much better than the alternative.)

When I walked I was fine, but when I ran, things became much more urgent, so for the last 2 miles of my race, I was torn between having a good pace and having the reputation of someone who doesn't crap their pants, so I alternated an awkward jog with some really fast walking.  I was so relieved when I hit 5.5 miles, because I knew it meant that I was almost done.  I picked up the pace and finished  in 1:25:02!  I know that's not an amazing time really, but I was definitely proud of it.  Eric was right there at the finish line waiting for me, and he had finished his 5k in 38:12!  (That's without training, isn't that annoying, ha ha).  And to illustrate why the Helvetia race is so awesome, at the finish line they had cold, sweet orange slices, bananas, bagels and chocolate milk for the runners.  The thought of chocolate milk on a hot day made me want to hurl,  but I took several orange slices, and they were amazing. 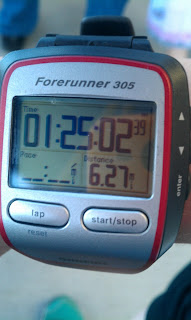 We sat and waited for Greg (clearly this was after I made the happiest bathroom trip of my life), who finished in 2 hours and 20 minutes.  We sat for forever and talked, it's probably the longest I've ever stayed at a post race event.  We enjoyed our burgers, drank beer and people watched.  We saw a little old lady who had completed the half marathon, which made my jaw drop to the floor.  Later when they did the awards ceremony, she obviously won for her age category, and we found out she was 80 years old!!  She finished the half in 3:07:54.  I mean, that is just utterly badass, not only is she out running, but she's getting a really great time too.  I am looking at the results right now, and there were quite a few men and women in the 70-80 category, which is just really amazing and inspiring.  I love when memaws and pepaws give the finger to society and don't sit around knitting or doing "old people" stuff, and instead are out doing amazing shit like this.  I really hope when I am 80 that I'm still running.  Plus Greg and I were joking that if we wait long enough and keep running, that our chances of winning a medal increase because barely anyone that old runs!  ;)

After showers and naps, we later met Greg and Kristen for dinner at a wonderful Peruvian place in Portland called Andina.  I ate well all week and decided to really celebrate, so we really enjoyed ourselves, although the food is fairly healthy.  The many mojitos and white sangrias I consumed were not though.  ;)  I told Greg that I was running the Portland Marathon in October, even though I was kind of anxious about telling a "real" runner that I was going to do a marathon.  Of course, that's just my silliness, because he was totally excited and thought it was great.  Since he's run about a bazillion marathons, I asked for advice, so here are some of the pieces of advice he gave me:


All in all, it was a great race experience, and it really did put me back in the frame of mind that I need to be in.  I can't wait to do my run tomorrow!