Today was the official start of my clean slate, and I have to be honest, I was more than ready for it.  Yesterday I  created a menu plan for the week, and then figured out everything I was going to need to make that happen, plus snacks.  I went to the store and got everything I needed so that I won't have one of those "oh shit, I totally need such and such, so I need to make 8 trips to the store." All of the meals except for one ended up being vegetarian.  It's just sort of how it worked out since a few are new recipes I want to try, or stuff that just sounded spring-like and good.

This morning's breakfast was steelcut oats with agave, walnuts and a side of strawberries/pineapple.  For lunch I had leftover bean mixture from that black beans and rice dish I posted on Facebook.  I brought a banana and an apple for snacks.  Tonight's dinner was the "Beautiful Buddha Bowl" from my Hungry Hottie cookbook, which is basically brown rice topped with sauteed veggies and avocado.  It sounds dull but I really enjoyed it.  There is something about the nutty toothiness of the brown rice with the hot veggies and smooth avocado that really works.

So the nutrition part was a home run today, but the fitness side was a little more of a fail.  I thought I was totally awesome because I had my clothes all packed and ready to go for a run, except I totally forgot my stupid Garmin.  I was so pissed, because I really wanted to be able to track what I was doing.  I decided that Run Keeper was better than nothing, so I planned to use that on my run.

Everything was just annoying today about the "run" today.  It's really freaking hot here, which makes me angry, so I picked this shady park to go run in.  Usually this park is pretty mellow and has a good vibe to it, but today the creepers were out in force.  Several times I had to pass this emo group of teenagers who were lighting up joints, which, to each his own but pot STINKS and is not something I want to smell on a good day, much less when I"m running.  They also had an unleashed Chihuahua that freaked out like the annoying little pissant that 99% of Chihuahuas are, and when I would pass it would run at me and start barking like crazy.  Every time I'd have to stop so that one of the stoners could come over and get their annoying rat dog.

The run itself was not a run, which I was somewhat expecting and was not surprised at.  I am totally out of shape, and the heat didn't help matters.  Oh, and Run Keeper continues to be the CRAPPIEST app ever created.  I don't know if it's because I have an Android or what, but RK simply doesn't work.  It can't find satellites, and then when it does, they sporadically go out.  I ended up turning it off 5 minutes into being at the park because it said I was doing a 30 minute mile when I was running.  I mean, I could crawl on my belly faster than a 30 minute mile, so I know I wasn't that slow running!!  I have no idea how far I went (I think roughly about 2.2 miles), how fast I was going or anything.  In some ways it was good, since today was about having a clean slate, going back to good habits and being in the moment.  In other ways I was fretting because I like to keep track of speed and distance so I can record it.

I was at the park for an hour and I think I ran about 15 minutes of that!  I am pretty disappointed, even though I got out there and did something today.  I am mad at myself for basically having to start back at square one.  Again, the heat didn't help, but being out of shape really doesn't either.  :(

I will end the post on a happy note...Molly's debut at the Starlight Parade was a success!  She was a trooper and an amazingly good girl the whole night.  Nothing seemed to phase or scare her.  She hopped right up on the float and fell asleep in my lap!  Before that happened, I managed to snap this adorable pic of her.  Enjoy! 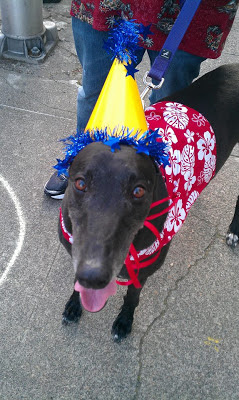 Posted by Runs To Get Waisted at 8:28 PM