So I have been teasing an "announcement" for the last few posts, and now I'm ready to reveal what it is.  It's an exciting announcement for me, although it was a difficult decision to come to, and took me a long time to come to terms with.  All that being said, I have made the decision to move my marathon date back, and will no longer be running the Layton Marathon in Utah.  After careful debating, teeth gnashing and hand wringing I decided that I will be running the Portland Marathon in October: 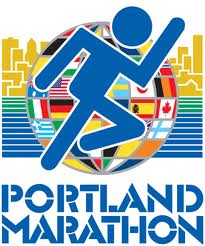 I am very excited about running Portland, but as I said before, it was a very difficult decision to make that included a lot of feelings of failure, fear of disappointing people, and wondering if I was doing the right thing.  Ultimately, I know I am doing the right thing, and my wonderful husband played a large part in helping me realize that and to feel good about my choice.  I also have to give him a huge shout out, since not only did he console, cajole and hold my hand as I waffled about doing this, but he PAID my entry fee into Portland.  I know, I am very, very lucky.

If you're like, why the change of heart, here are some factors that played into my decision.

1.  Time is a factor.  Going to Layton was going to mean taking a chunk of vacation, and after the unexpected trip to Los Angeles, plus a week long visit from my family this summer, it was going to pretty much deplete our vacation time and possibly result in unpaid time.

2.  Money, honey.  Once we started looking at hotel, flights, car rentals and all the other expenses, it was going to be a bit much for me to swing.

3.  It didn't feel right.  I will be honest with you, I was getting a horrible vibe from the marathon itself, which is ultimately made me begin to question and have doubts.  It started with my sadness at the fact that they not only changed the name of the marathon, but they moved the date much higher up than I'd seen it be in the past.  Instead of October, I was looking at August, which I was not thrilled about due to my utter hatred of running in heat.  And the point of why I wanted to run the marathon in the first place is that my medal would have said "The Layton Marathon", ie, my last name.  "The Layton-Syracuse Marathon" just doesn't have the same ring to it.  And yes, I acknowledge that those two things are utter first world problems!!  ;)  I did have other valid concerns though.  The host hotel (or not?) was claiming they had no idea that they were the host hotel, while the marathon people claimed on their site they were.  All of the information on the site was from 2012, and when I would email with questions, the person responding sent one sentence replies that seemed as though they were annoyed that I was even asking.  Their Facebook page information conflicted with everything on their website as well.  I began freaking out and wondering, "If it seems this unorganized now, what the hell is going to happen if I fly down to Utah?  Are people going to have their shit together?  Am I going to be in the dark until the week before I leave?"  I tried to put things in perspective and tell myself that Layton, UT isn't exactly a big city like Portland, New York or Boston, but you would expect them to somewhat have some organization and correct information at this point since the marathon is in August.  Maybe I'm off base and everyone involved is wonderful and I'm the total dillhole, but the longer things seemed to go on, the more uneasy I felt.

4. Ultimately, I wasn't ready.  My couple of months of poor eating and everything else aside, my illness cost me over a month of training, and is going to put me back somewhat at square one.  Thinking about that coupled with the terror of flying to a strange place where I didn't know the altitude/weather is what tipped me over the edge.  Instead of being excited, I began dreading everything.

5.  Hometown Pride.  This is going to sound hokey and granola, but the Boston Marathon bombings really drove home my desire to do my marathon in Portland.  I barely know how to explain how those two things go together, other than watching Bostonians unite and take such pride in their city reminded me of my fierce affection for Portland.  I LOVE this city, I really do, and something about that bombing story made me question why I was going to a strange place that had no meaning to me to do a marathon.  Why NOT do the marathon in this crazy hipster filled, bacon obsessed, borderline alcoholic, weird little city that I have grown to adore?

So, all of that was churning in my walnut brain for the past 3 months and possibly longer.  The first time I blurted out "I should have just done the Portland Marathon" was sometime in Feb/March after a curt response from one of the Layton people.  Periodically after that I made wistful comments about it, and then when we were in LA and the bombing stuff happened, I looked at Eric and was like, "I made a mistake.  I should have signed up for Portland."  Again, cue the churning and fear of disappointing others, but I worked through that, and I'm ready.