Yesterday I started preparing myself for "Clean Slate Monday", which is when all the bad nonsense from the last couple of months is in the past, and training/healthy ways are back in the forefront of my life.  I know many would say, "you just need to do it now!"  However, lack of preparation is my downfall, and for me, easing back into a healthy mindset and making plans is ultimately going to work better.  I have done better in the last few days in ratcheting down the crazy.  I have been getting in tons of water/tea and eating a bit better.  This way, Monday is going to be less of a shock.

I began listening to one of my favorite podcasts yesterday, Two Gomers Run For Their Lives, just to start hearing about running and thinking about running again.  While I was perusing their Facebook page, I noticed someone posted a link to this pretty hilarious site called Rumpus Running (http://rumpusrunning.com/) that has funny tech shirts, which is something you rarely see.  When I went on the site, I immediately saw this shirt and just about had a heart attack: 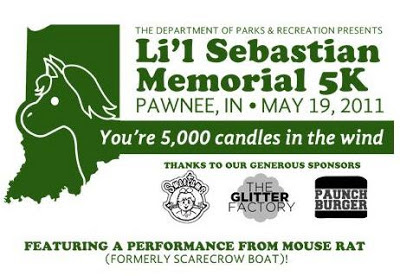 I don't know how many of you watch Parks and Rec (if not you'll just be confused at why I got so excited), but I just about peed myself at this shirt, and of course HAD to have it.  Hilarious stuff.  I also ordered a couple more cute shirts they had.  One says "Tramps like us were born to run" that has an outline of Bruce Springsteen, and one that looks like the Ramones logo but is running themed.  I definitely like to have fun gear!  You should definitely check out the site if you get a chance, and they are also having a 20% off sale right now.  ;)

Next I threw down a challenge to my hubby that in June we would eat fully plant based 3 days a week.  It's not so much that I think that eating meat is evil, because obviously I am a carnivore, but I do tend to eat healthier and cook more creatively when I make vegetarian meals.  So I sat down last night, perused some veggie blogs for dinner ideas, and then wrote down a list of potential veggie dinners.  That way, I can easily make meal plans so that we know exactly what we're eating when.  I got out a calendar and calculated how many weeks I had to the marathon, and looked at my training plan again.  Of course because it's me, things are going to be a little f'ed up.  Next week I'll be easing back into running and then suddenly have to run/walk/crawl this half marathon.  Hopefully I don't get hurt, I guess I will be stretching like my life depends on it!  Other than that though, I have plenty of time to do my training plan right.  There are no travel plans really other than my family's visit in July, but I will be around here and can hopefully sneak my runs in the morning.

Theoretically that's all I was going to do, but I got antsy sitting on the couch last night and decided to clean out our pantry.  It has been a hot mess for a few months, and finding anything in there is pretty much like a combination of a visit to a hostile planet and an episode of Hoarders.  I figured I could get in there, clean out the crap/expired stuff and evaluate what we had.  It took me about an hour, but I definitely cleared things up nicely and got it all organized.  I discovered that I have a problem with buying 900 boxes of tea as well as 900 boxes/bags of rice.  I really need to start working on the tea before I order or buy any more!

I also found a bag of vanilla beans that I'd ordered online last year when I was doing a lot of baking.  Sadly they were dried up as all get out, but there were probably 15 beans left in there, and I couldn't bear to throw them away.  After debating what to do with them, I remembered that I had some vodka left over from our Oscar party that I wasn't going to drink in a million years, so I decided to make homemade vanilla extract.  I cut the vanilla beans up and put them in the vodka, and there you have it.  I was just happy that I was able to put them to some kind of use, since they are pricey.