Confessions of a Wasted (not Waisted) Runner - Part 1

Ok, I'm just going to write this and get it out of the way.  I have fallen off the wagon hard core with training, eating and just about everything in my life, including writing in this blog.  It started after I got majorly sick in LA and physically couldn't run, and then just kind of snowballed from there after shit got really busy in our lives.  Obviously we have lots to catch up on, so you're going to have to forgive me for this brief, herky jerky post that contain the Cliffs Notes on what's been going on in my life.

1.  The Rock and Roll Hall of Fame

In early April we attended the Rock and Roll Hall of Fame induction ceremony for the 2nd time.  Last year we went mainly to see Guns N' Roses get inducted, although everyone in the class last year was amazing.  My husband is a huge Rush fan, and of course the big controversy with the RRHOF is that Rush had not yet been inducted.  During a probably drunken conversation last year I promised my husband that if Rush ever got inducted that we'd do our level best to get to the ceremony, thinking that the RRHOF would continue to be the bizarre organization they are and continue to snub Rush.  Well wouldn't you know, Rush was on the ballot this year and made it into the 2013 class, so I made good on my word and we went to the ceremony in Los Angeles.  Although the Cleveland ceremony from last year stands as my favorite, this one was a blast. I could write more about it, but my husband actually wrote a very amazing and eloquent blog post about it on his music blog, so if you are dying to know more about the ceremony you can read about it here:  http://e-rockracy.blogspot.com/2013/04/rush-hour.html.  I will post this one picture of Public Enemy performing.  They had one of the best performances of the night for me! 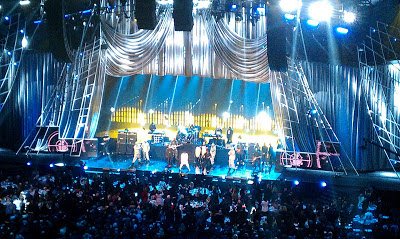 During our trip to LA, I got knocked on my ass by what I'm pretty sure was a combination of SARs and bird flu.  I haven't been that sick in years, and ultimately the illness is what began my downfall into not running.  It started out with feeling like I'd swallowed broken glass, then followed up with fever and exhaustion.  I even sat through the HOF ceremony with severe fever.  Then came the coughing.  Then came me not having a voice.  It was two and a half weeks before I could speak normally, and over a month for me to stop coughing my brains out when I would lay down to sleep at night.

Not much to note on this other than it hindered me in my getting well process.  And I had to leave 2 days after we'd gotten back from Los Angeles, and I did a lot of drinking to try to curb my coughing so that my roommate wouldn't hate me.  Aye-yi-yi!

After 2 months of anxiety, sadness and waiting for our forever dog, we welcomed Molly into our lives.  We wanted her immediately when we saw her, and she has been a really amazing dog.  We still miss Natasha and always will, but Molly has brought a lot of joy back into the house.  Contrary to thought, greyhounds aren't crazy energetic dogs, they are actually couch potatoes, so Molly hasn't really gone on a run with me!  I would eventually like to work on her stamina so that she could handle a two miler, but she actually is overweight right now, so we're having to help her shed some pounds.  For right now we're doing a walk regimen and portion control (I am doing a much better job with her than myself unfortunately!)  I will go more into detail about Molly's past in future posts, but for now, I will leave you with a picture of her doing "sweet eyes". 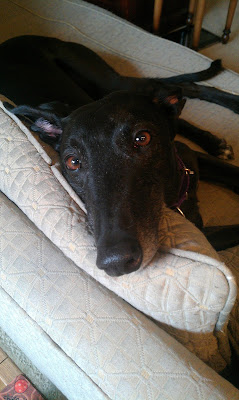 Eric and I celebrated our six year wedding anniversary over the weekend.  We had an AMAZING calorie laden meal at the famous Portland restaurant Beast and spent a lot of time hanging out, going to movies, and going on walks.  It was a really good one, and I couldn't be happier.  :) 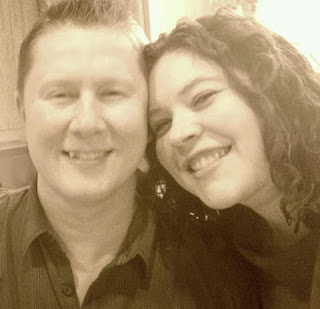 So that in a nutshell what has been going on in my personal life, and I just kind of wanted to slay the dragon and get this post up and out or else I was never going to write it.  In my next post I will talk about actual running, including a running announcement for me!
Posted by Runs To Get Waisted at 10:04 PM