I did it!  This time for real! 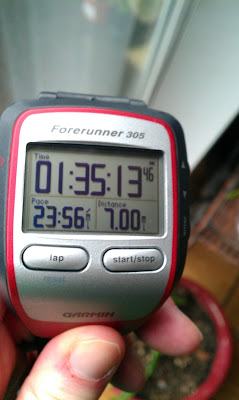 I got up this morning knowing that I was going to do a longer run, but I was not sure what that was going to look like or how far I was going to go.  I was feeling tired and was trying to put off my run as long as I possibly could.  I made myself breakfast, an English muffin with eggs and ham.  I watched the new episode of "My Cat From Hell" on the DVR and stretched.  Despite my best efforts to talk myself out of the run, I finally decided to just get up and get it over with!  We went out with my aunt and uncle last night and I ate a couple of things I had not already preplanned, mainly a Ruby Jewel ice cream sandwich.  They were all delicious and enjoyed, but I knew that I needed to pay the piper for it.

The temperature wasn't too bad, it was in the 50's, however it rained the entire time I was running.  I brought a water bottle with me but almost didn't need it since the moisture in the air was practically keeping my skin and mouth hydrated.  I was surprised to find that once again my lung capacity felt incredible, and my legs felt like they could go on forever.  I decided to take a walk break after mile 1 to save my legs for whatever distance I was going to do (I still hadn't decided a mile into the run!)  At first I said to myself that I would do five miles again, since I did so well the other day.  Then I was like, "Well, but you really should be doing a longer distance on the weekend, so you should do 6".  Then my brain said reproachfully, "You DID have that Ruby Jewel last night when you intended to get a smaller dessert.  Plus you were supposed to run  7 miles last week and you didn't even come close to that.  Do 7."  Yes, I am a crazy person and have a constant dialogue with myself when I am running!

So it was decided, I was going to do 7.  I passed the road last week where I turned around, the road that according to Run Keeper meant I'd gone 3.5 miles.  I looked at my Garmin and it said 2.72 miles!!  (Yikes, that meant I'd run even LESS than I thought last week.)  With every beep of my Garmin signaling another mile passing, I continued to run, continued to feel good and continued to be amazed.  I felt so good that I briefly considered doing 8 miles, but I decided to keep it at 7 miles, which was already further than I have ever run in my life!  The last half mile was probably the worst, and it made me so happy I stuck with the 7 mile goal!  My legs were pretty shot towards the end, not with pain so much, but I was just very tired and had raging heart burn. When that 7 mile notification beeped, I wanted to dance!  As I said, it's the most I've ever run in my entire life.  I would have fainted at the thought of doing 7 miles back in January, but this actually wasn't that bad!!

My husband was pretty cute, I had texted him during my 5th mile to tell him I was doing 7 miles, and when I walked in the house he started applauding me!!  I told him I wanted to be greeted like that every time I walked in the room from now on!  ;)

I rewarded myself with a dinner that I have been ridiculously craving for a month...I don't know why, but I have wanted a damn hot dog so bad!   I have not been able to stop thinking about them!  Since I earned a pretty hefty amount of PP for my run today, I decided to go for it and have a couple of Kosher hot dogs complete with sauerkraut, relish and mustard.  I enjoyed every bite of them too!!   And I MAY have gotten another Ruby Jewel sandwich to enjoy tonight for dessert.  Just maybe.
Posted by Runs To Get Waisted at 6:29 PM